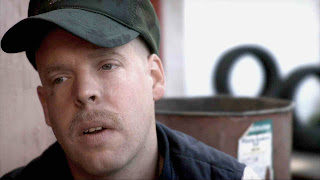 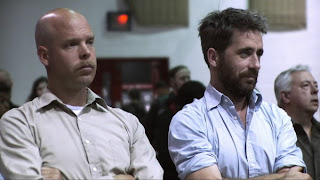 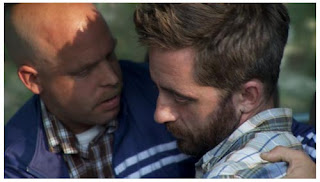 And I saw a new heaven and a new earth: for the first heaven and the first earth were passed away; and there was no more sea.

And I John saw the holy city, new Jerusalem, coming down from God out of heaven, prepared as a bride adorned for her husband.

Shot, edited, produced, and cowritten by the director, Rick Alverson certainly has his imprint all over this movie, which suggests this is precisely the story he chose to tell, which is certainly part of the problem, as it’s difficult to find a personal place of entry for this film, which is likely meant as a fairly benign, non-confrontational, and mainstream avenue of introducing Christianity into the storyline of an indie film.  But the story relies so completely upon Christian beliefs, where one’s salvation depends upon accepting Jesus Christ as one’s savior, without which one presumably goes to Hell.  With those clear cut, black and white options, there’s little wiggle room for the rest of us sinners.  To its credit, the film is naturalistic and completely unpretentious, but there’s little human drama to speak of unless one accepts the Christian challenge.  Without the guidance of Christian faith, say Buddhists, Jews, Muslims, or atheists, for example, it’s just a lot of talk that seems to corner people into boxed communities of perception, which is a shared understanding so long as you live within that box.  For viewers outside the box, however, one finds little interest in the road to redemption offered by this movie, as so little is expressed “outside” the Christian vernacular.  Will Oldham as Ike, a likeable evangelical Christian without a hint of self-consciousness, seems to specialize in these buddy movies, playing an aging hippie in OLD JOY (2006), something of a road trip through the Oregon Cascades that may as well be a psychological reflection upon two character’s own tattered interior lives.  Here he is friends with Sean (Colm O’Leary), both working at a used tire shop in Richmond, Virginia, where they spend nearly all day every day in one another’s company, where Ike preaches the gospel in his ordinary life, observing prayer before meals, trying to emulate the teachings of Christ, and more to the point, talking about leading a good life all the time, where he’s constantly on Sean’s case, as if it’s his personal responsibility to make sure he‘s saved and gets to heaven.

While Ike is open and always upbeat, chirping about what a beautiful day it is, Sean is just the opposite, a tense, isolated and moody guy who tends to have psychological meltdown episodes where he needs to be alone until they pass, where he is overcome by sadness and a wrenching despair.  While Ike is carefree and always talkative, saying the first thing that comes out of his head, Sean’s intensity is kept under wraps, as he befriends Ike and tries to appreciate his values even if he doesn’t share them himself.  The background of both individuals is never revealed, other than Sean’s from Ireland and spent a year in Afghanistan with the National Guard supplying the troops with what they needed, so we mostly have only the present to deal with, where Ike brings Sean to his Biblical revival meetings and even home to his father, where father and son sing a spiritual together after dinner.  Since Ike is the talkative one, he’s always setting the agenda, keeping his buddy on the right track, while Sean tends to hold everything inside, trying to be polite, rarely expressing his real feelings.  Nothing of real consequence happens, where there’s really nothing to hold the audience’s attention.  The dialogue between the two characters is slight and mostly insignificant, never really offering much insight into the human condition, which can get aggravating after awhile, as these are two uninteresting guys many in the audience wouldn’t spend any time with by choice.  We’d bolt at the first chance and find someone more inclined to just live their lives instead of preaching about it all the time, always guided by a moral path of his own chosen belief, suggesting other people’s lives must also be guided by this same righteous path.  While it takes Sean until nearly the finale to figure it out, the audience cools to Ike early on, where if truth be told, we were waiting to see if he would lose it and start firing automatic weapons indiscriminately at randon passerbys because the way of the righteous had been violated in some significant way.  As is, this is simply not a very engaging drama, where neither character holds that much interest, but spiritual uncertainty finally feels like an escape from the evangelical chokehold.
Posted by Robert Kennedy at 9:54 AM