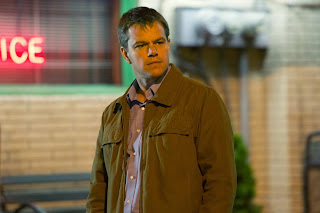 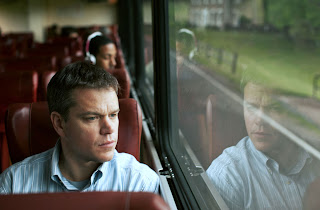 Gus van Sant helped make Ben Affleck and Matt Damon’s careers by directing them in their Academy Award winning first screenplay, GOOD WILL HUNTING (1997), coming to the rescue again at the last moment filling in for what was to be Matt Damon’s initial foray into directing, pulling out with just 5 weeks before shooting began, but van Sant admirably pulls off a respectable small-town picture set in the rural farm country of Western Pennsylvania.  While the film has a conventional structure of big city corporate honchos visiting small time farmers eager to buy up farmland leases in order to drill for natural gas, promising large sums of money, in some cases millions, to farmers whose land may already be leased due to the hard economic times.  Seemingly easy pickings, two corporate sales personnel are sent in from Global Solutions, a rising West coast star Steve Butler (Matt Damon) and his partner Sue Thomason (Frances McDormand).  Buying flannel shirts and a pick up truck to look the part, they set out to convince the town to accept the company’s offer of money in exchange for drilling rights.  This has all the makings of a David vs. Goliath scenario, especially when an aging town spokesperson, the plain speaking Hal Holbrook as Frank Yates, a local science teacher, suggests this offer could ruin their land and water supplies.  When Butler suggests those are just rumors supplied by their competitors, Yates counters that this is a dangerous and tricky business where accidents or catastrophes have been known to happen.  When he urges the town to put it to a vote, Butler has 3 weeks to convince a majority that hydraulic fracturing technology, which can drill deeper than previously expected, has led to major increases in natural gas reserves and may not only get them rich, but that it’s safe and may be their only option.

The subject is reminiscent of Laura Israel’s recent documentary WINDFALL (2010) about installing giant wind turbines in upstate New York, especially since the chosen area happens to be among New York’s poorest counties and represents financial incentives to the dramatically declining dairy farm business.  What’s curious is the cross-section of people in town, rural folks who all know and trust one another, who have natural suspicions of outsiders, but who like the sincere, folksy, look-them-in-the-eye approach of Butler.  His position is immediately undermined, however, by the arrival of co-writer John Krasinski as Dustin Noble, a hard corps conservationist representative who aims to win over the town, immediately out-applying the folksy charm at local watering holes, singing popular country ballads on open mike night, providing pictures all over town of dead cows in the wake of Global Solutions drilling.  Soon he has the citizens eating out of the palm of his hand, including a bright and attractive local schoolteacher Butler has his eye on, Rosemarie DeWitt as Alice.  What seemed like a simple proposition turns into a personal nightmare, as Noble is brash and intuitive, knowing everything ahead of time about Butler and Global Solutions, where he’s always one step in front of their efforts, leaving this expert corporate team to continually second guess themselves.  His swagger and confidence gone, as much of the town has turned against them, Butler is running out of options.  While he has a majority of the landholders signed under contracts, he doesn’t have a majority of the town’s eligible voters.

What’s intriguing about the film is the audience tends to side with Matt Damon, even if he’s a corporate shark, because he’s just an Iowa farm boy himself whose town lost everything when the Caterpillar plant went belly up.  In his mind, he’s actually helping these people, offering what they need, but audiences also tend to be suspicious of $9 billion dollar corporations that rarely tell the whole truth.  It’s also easy to side with Noble’s counter arguments, as no one likes to see dead livestock, but his arrogance in continuing to show up the corporate superstar is infuriating.  Despite their high powered reputations, there’s little evidence of it on display, as instead this corporate duo seem like a beaten team, especially when they construct a country fair and carnival, complete with a Ferris wheel, pony rides and pig races, even a tractor pull, all the things local farmers and their families adore, but a downpour of rain puts an end to that dream, leaving them hopelessly outclassed by a smug amateur.  The picture of the rural locale is beautifully captured by Linus Sandgren, while the melancholic score by Danny Elfman is quietly in reserve, leaving a sad tinge to this picture, as there was never much of a fight.  The only face to face discussions take place at that initial town meeting, where the voice of Frank Yates becomes the conscious of the community, as he demonstrates a knowledgeable foresight in not jumping at the money.  But the overall picture is clouded somewhat by a mysterious plot twist that suggests the argument is not fully resolved, that it is still developing, and that each community will have to deal with a similar story.  What’s perhaps most surprising is how close this story resembles the predictable plot to THE MUSIC MAN (1962), where a swindling outsider comes to sell a bill of goods to the unsuspecting people of River City, Iowa, where the town’s goodness and moral righteousness, not to mention the attractiveness of the town librarian (Shirley Jones), makes him see the light, turning a con man into a productive citizen.  A similar state of enlightenment adds a touch of ambiguity to this picture as well, where the moral seems to be “It’s not nice to fool Mother Nature.” 70s Mother Nature *Chiffon* Margarine Commercial - YouTube (31 seconds).
Posted by Robert Kennedy at 9:32 AM