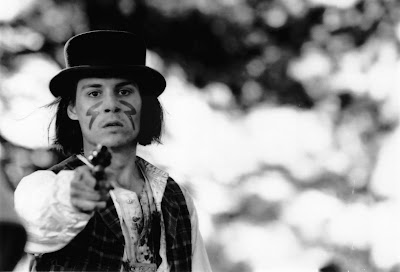 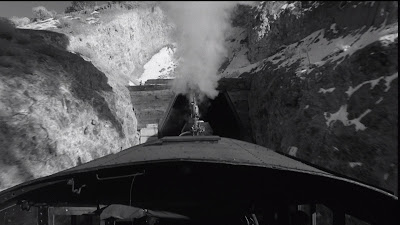 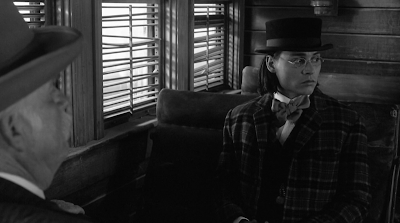 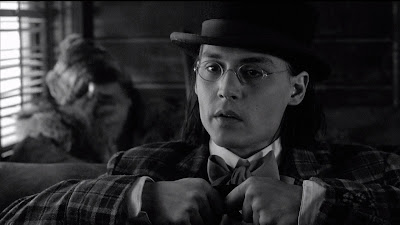 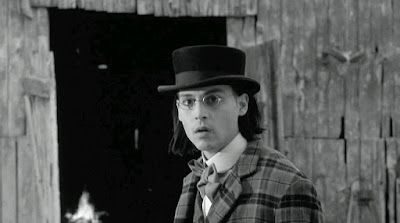 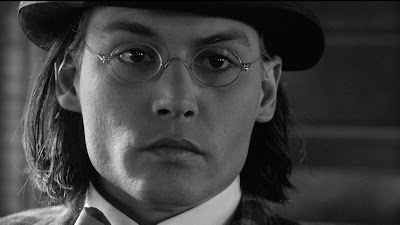 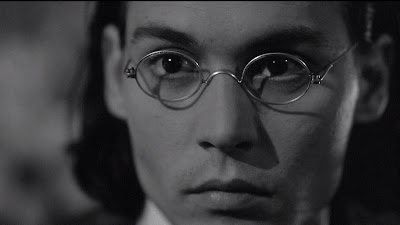 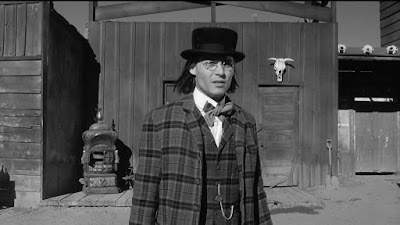 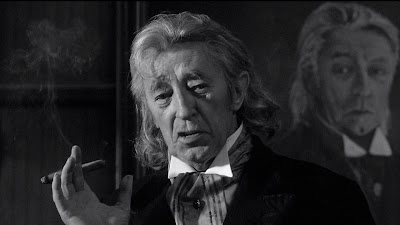 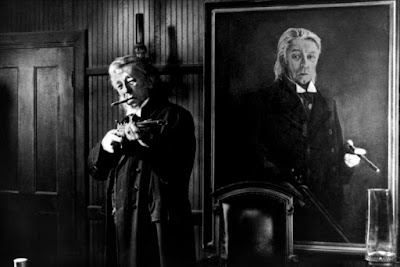 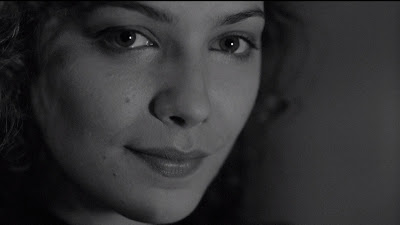 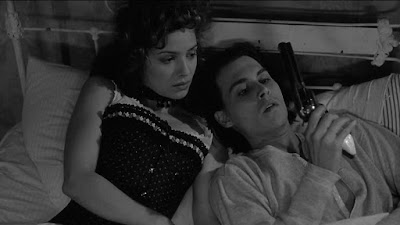 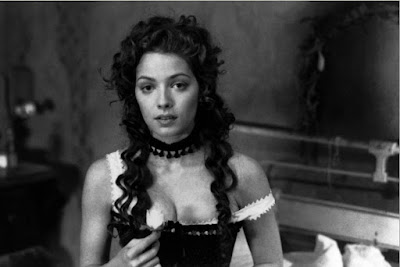 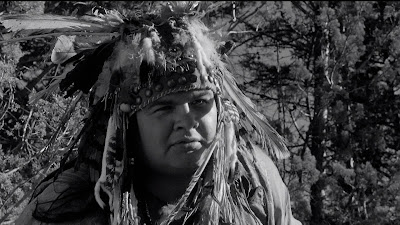 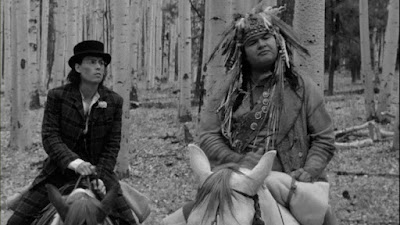 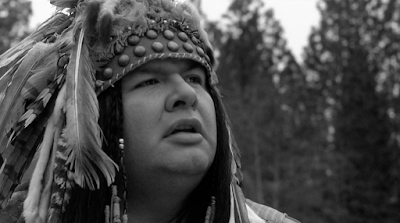 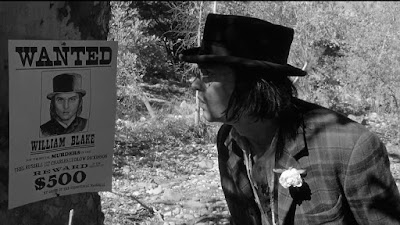 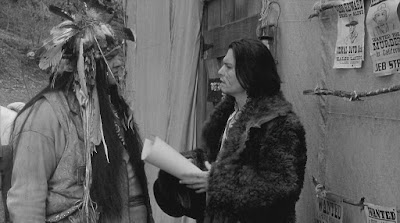 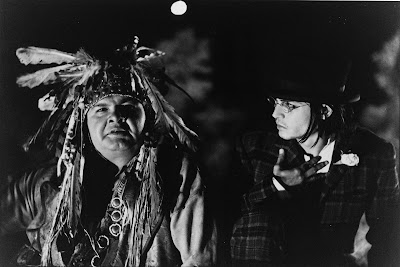 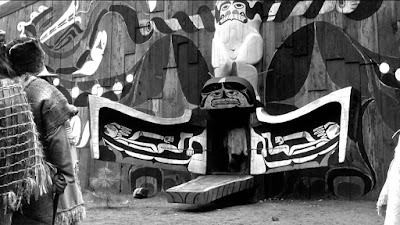 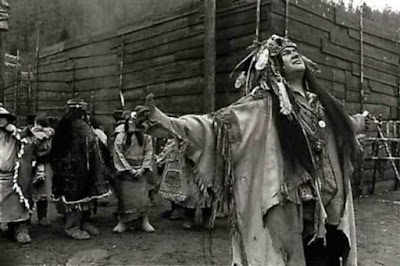 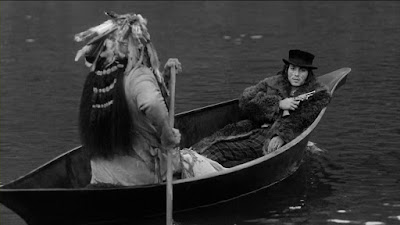 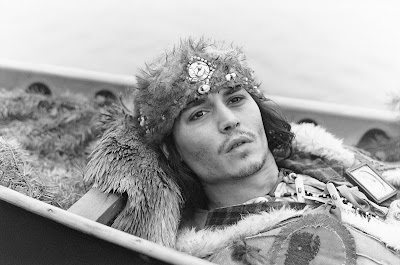 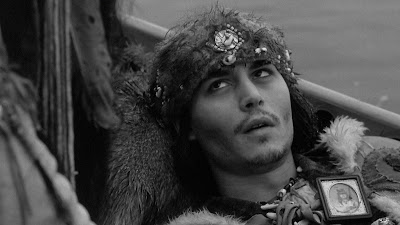 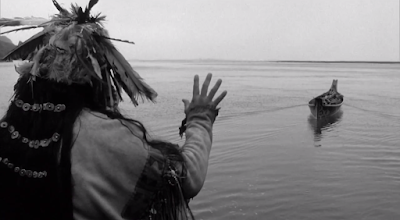 The eagle never lost so much time, as when he submitted to learn of the crow.
―William Blake, from The Marriage of Heaven and Hell, 1793

From the lower register guitar riffs from Neil Young that play throughout the film, Dead Man - Neil Young (Guitar Solo #1) - YouTube (5:18), that in fact punctuate each scene, the secret to understanding this film is realizing that each character remains true to themselves.  Johnny Depp plays the same character he played on his TV debut on 21 Jump Street, a straight arrow who hasn’t a clue what he’s dealing with, as the world around him is immersed in nightmarish greed and corruption as initially prophesied by a coal-faced Crispin Glover, a coal-stoker on the long train ride from Cleveland to somewhere out West, beautifully shot in Black and White by Robby Müller, where his preminiscient ramblings are not taken seriously and also represented by Robert Mitchum in his oddball last role, a capitalist megalomaniac who pulls out all stops in going after Depp, an East coast tinhorn who was in the wrong place at the wrong time and was nearly murdered by Mitchum’s son, who with one shot killed a young saloon girl and put a bullet lodging next to Depp’s heart.  Depp, firing blindly, finally shoots the murderer and steals his horse before escaping out of town where he awakes the next morning to a full-dressed Indian (Gary Farmer) with a knife to his heart, scraping out what he could from the bullet but claims the rest is too close to his heart, calling him a “dead man.”  When Farmer, who calls himself Nobody, discovers Depp’s name is William Blake, he is overjoyed, as he’s actually familiar with his art and poetry and joyfully nurses him back to health.  Most of the film is shot with the two of them on horseback featuring mystical poetic musings from Nobody, with hired guns following, cutthroats paid by Mitchum, who doesn’t care if Depp is returned dead or alive, but he wants his stolen pinto pony returned.  On the run, Depp and Farmer on horseback attempt to elude the pursuers, eventually increasing to untold numbers as wanted posters keep appearing out of nowhere bringing all number of wannabe’s into of the forest for the reward money.

Nobody’s personal story is interesting, a parable for untold Indian history which nearly nobody’s ever heard, but it contains horrific truths about growing up Indian, in this case by a man who was rejected by both the Indian and the white world, so he wanders alone as an outcast fending for himself, pretty much despising or at least mistrusting both cultures, but thoroughly assimilated into Indian lifestyle where he wears the clothes proudly and finds white people ridiculously stupid.  As bounty hunters lurk ever closer, Depp is at first an astonishingly poor shooter, but in time he becomes acclimated to the ways of the West, always speak with a gun first and ignore the myths, the legends and the lore which are outright lies most of the time, but if people have enough money to print enough copies of the myths, people will start believing it.  Much of the dialogue between the bounty hunters is absurdly ridiculous, but that’s the point.  Their very lives depend on the spreading of Western lore, most all of it fabricated, which is how they were hired in the first place, by reputation, and why they were employed to carry out a job under false pretenses, spreading the word that Depp was a double murderer.  As they wander through the forest, everyone’s true nature is revealed.

Told through a series of vignettes, each fading out to black, where the lone sound of the guitar rhythmically adds tone and coherence, Farmer’s character takes on greater significance as he’s clearly the only one with practical knowledge of how to survive, who constantly generates wisdom and humor while Depp is passively subdued by his deteriorating health.  As Depp was something of a blank piece of paper when he entered the West, a novice, completely inexperienced, so Farmer is the film, as he tells a story few are familiar with, using poetic references from William Blake’s poems to offer insight into the human condition.  Yet he’s also just a man, but he’s a good man.  As Farmer knows Depp is already dead, with bad men following him who want to bring him to a bad end, both good and evil are fighting for his soul where Farmer’s singular purpose seems to be preparing Depp’s fate for the afterlife, whether he’ll get a dignified send-off or die an ignominious death.  The indiscriminate shooting of buffalo out the train window and the shooting of humans becomes a prominent theme, as every day added to Depp’s life is realized only due to his sudden prowess in the use of a gun.  As the sheer look of the forest in the film changes from a gorgeous ride through the bleached out white of birch trees to the immense grandeur of the enormous trees of the Pacific Northwest, Depp moves ever closer to his fate.  The final sequence in the Indian village is nearly wordless, yet ponderous and ever so real, using a reconstructed village of the Makah Indian Reservation from Neah Bay on the Olympic Peninsula, one of the few tribes that exists in near exclusivity protected by the harsh rocky landscape and the isolation of the ocean, whose Pacific coast totems, sculpture, longhouse, and art designs profoundly add to the aesthetic.  No explanation is needed to this near wordless finale that demonstrates a complete lack of artifice and plays out exclusively in mystical Indian imagery.
Posted by Robert Kennedy at 12:00 AM