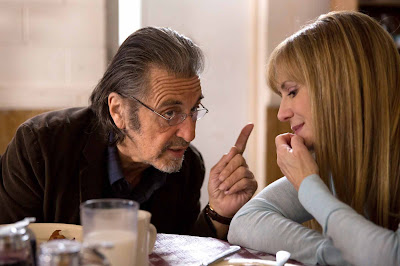 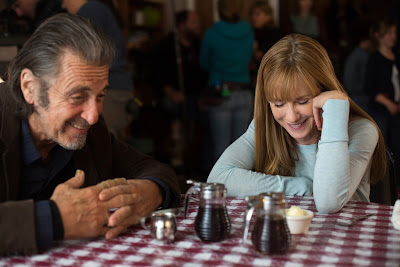 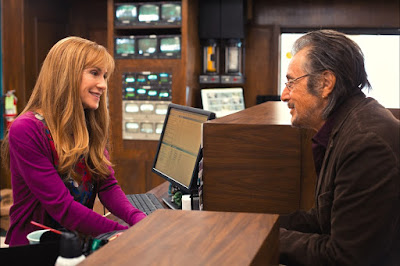 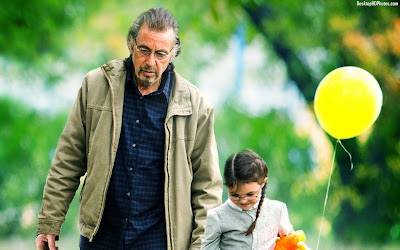 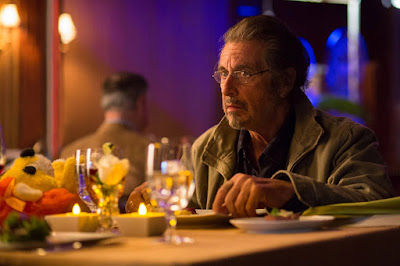 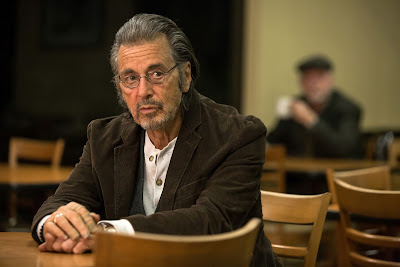 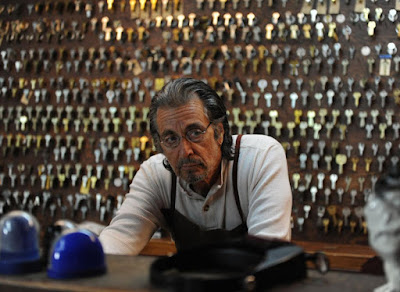 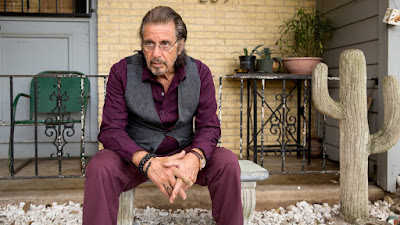 David Gordon Green continues to confound, even at this stage of his career, where he’s no longer the young indie filmmaker that made visually spectacular films about relationships and growing up, like George Washington (2000), or his big budget stoner comedies, like The Sitter (2011), while the new phase he’s entered into includes working with name actors, such as Paul Rudd and Emile Hirsch in Prince Avalanche (2013) and Nicolas Cage in Joe (2013).  It’s highly unusual, to say the least, to finally see an actor of Al Pacino’s stature to be working with the heralded indie director, and Holly Hunter as well, where the viewer simply hasn’t a clue what to expect.  What is indisputable, however, is that Green is one of the best directors of his generation, where he was one of the first, with many following afterwards, to come from the North Carolina School of the Arts Film School, which has also produced Green’s cinematographer Tim Orr, actors Danny McBride and Paul Schneider, but also new indie filmmakers Jeff Nichols and Aaron Katz.  Refusing to be pigeonholed, this film feels like a spectacular failure, as it strives to be unlikeable and commercially off the edge, where he’s not going out of his way to build a new audience.  But what it has is an uncompromising spirit, where Pacino isn’t simply some lovable old man with a cat, like the popular Art Carney in Paul Mazursky’s life-affirming HARRY AND TONTO (1974), where Carney won the Academy Award for Best Actor in the same year Al Pacino was nominated for THE GODFATHER II (1974).  Instead this film has the balls to deviate from standard practice and allow Pacino to play a despicable and thoroughly deplorable human being.  While it’s likely this was the criteria that drew him to the role in the first place, as it’s the exact opposite of what leading men are used to playing.  At age 75, the general feeling is that Pacino can do whatever the hell he wants to do at this stage in his career, as he’s free to choose the material that interests him the most.  Still, it may come as something of a surprise just how detestable and loathsome he really is in this role, where the audience has to put up with him in nearly every frame of the film.  To put it bluntly, this is not an easy experience.  Yet that’s the unwelcoming quality both Green and Pacino bring to this film.  Accordingly, it speaks volumes about the recalcitrance of old age.

First and foremost is the voice, where Pacino’s gravelly, world-weary voice narrates the entire film, much of it dictated letters written to a long lost love named Clara, who it appears was the love of his life―not the woman he married, we learn much later, but the one that got away, who in his mind has been built up to be so much more than she ever was in real life.  In short, she has become an obsession that he can’t control, as he measures everything else that happens in the world next to his image of her, where nothing even comes close.  Accordingly, his life is a series of neverending disappointments, with occasional moments when things aren’t so bad, but what follows is a flood of disillusionment with the way of the world.  A.J. Manglehorn (Pacino) is a lone locksmith by trade, burrowed into that hole of an office where he works and barely ever speaks to anyone, preferring a life of solitude where he continually chatters away to his cat, or the friendly bank clerk Dawn (Holly Hunter), who he waits to be serviced by, where for two or three minutes they’re like long-lost friends as he deposits his weekly earnings, doing it all over again the next week at the exact same place and time.  To say he is a creature of habit is an understatement, as at his age, he comes to rely upon the safety and normalcy of routine.  You might even say it’s what keeps him alive, as that’s all he has to look forward to.  Without it he’d be lost.  What immediately stands out is what a cranky old bastard he is, bitter and difficult most of the time, where he seems to thrive on giving people a hard time.  But really, he’s simply not used to other people’s company as he spends so much time alone where he experiences a tortuous relationship with the past.  Reliving the failures of one’s life and always reaching the same dead end is not very inspiring, as it leaves him emotionally deflated and disgusted with himself, where he’s in no mood to please others, as he’s so self-absorbed in his own pathetic misery.

His composed letters to Clara are the only moments of optimism and joy, where thinking of her gets his mind right, as the world looks different somehow, filled with color instead of looking dreary and gray, and not so cluttered with meaningless material.  As we hear the umpteenth letter that he composes to her, we can’t even imagine the profound depth of misery and loneliness that accompanies every carefully chosen word.  He gets up the nerve to actually ask Dawn out on a date, which touches a piece of his memory that he hasn’t used in a while, where it’s a bit out of character, but their conversations are extended by several innocent meetings at a local community center serving all-you-can-eat pancakes.  While it’s clear she’s looking forward to it, perhaps she comes on a bit too strong, even though they’re meeting in a mostly empty, nondescript cafeteria.  Not at all on the same page, Manglehorn instead launches into a lengthy soliloquy on Clara, like releasing the fogbanks of his own personal obsessions, showing no regard for his guest, which Dawn finds rude and ill-mannered, eventually leaving in stunned anger.  Manglehorn’s response is to take the uneaten food off her plate and add it to his own meal.  While he’s normally cranky and disgruntled, he usually reserves his surly nature for when he’s alone.  Throughout the film we see evidence of weird and inhospitable moments with his own wealthy but estranged son (Chris Messina), who he barely knows, or a somewhat demented turn from Harmony Korine as Gary, who runs a seedy massage parlor but remembers Manglehorn fondly as the coach of his Little League baseball team, apparently one of the few good guys in his overly troubled childhood.  No moment is stranger than a surrealistic multi-car accident that borders on a tribute to Godard’s WEEKEND (1967), where bodies are lying inertly on the ground or hanging out of doors, as doctors have not yet arrived on the scene, but instead of blood there are crushed watermelons strewn around everywhere, where the color red saturates the bizarre landscape.  The scene is even more impactful by the way it is shot, as Green uses slow-motion to allow observing detail as Manglehorn walks past the carnage, with the muffled sound altered as well, all the while holding onto his prized cat, perhaps his only real friend in the world.  That horrible collision may as well be a metaphor for his life, a series of neverending accidents all strung out together.  But the film is not entirely downbeat, as there is room for one of the more unforgettable scenes of the year, as even Al Pacino is upstaged by a heavyset black man (Tim Curry) entering the bank holding a bouquet of yellow flowers, breaking out into song, singing at the top of his voice, where out of the blue one of the black female managers (Monica Lewis) comes out from the back and joins him in singing the gospel hymn “Love Lifted Me,” Love Lifted Me - Hezeklah Walker & The Love ... - YouTube (5:11), where their offbeat duet may be one of the better staged love scenes of the year, the kind of moment where everyone else just stops to appreciate the novelty of the unraveling event.  It’s a strange and crazy moment in an otherwise dismal journey into the lonely abyss of old age, where Manglehorn is a man that seriously spends entirely too much time with himself, but it’s a brave glimpse into being alone, that dark empty corridor where we are all heading some day.
Posted by Robert Kennedy at 12:00 AM