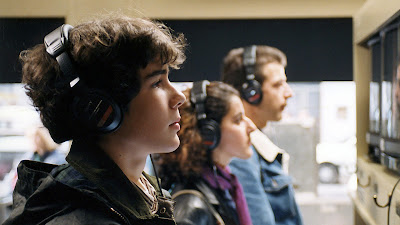 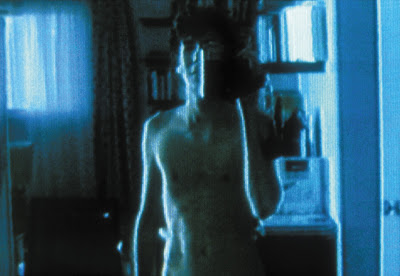 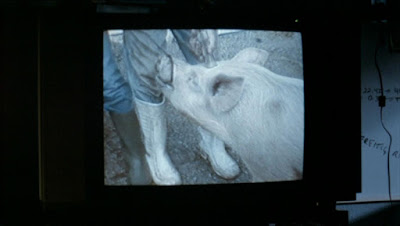 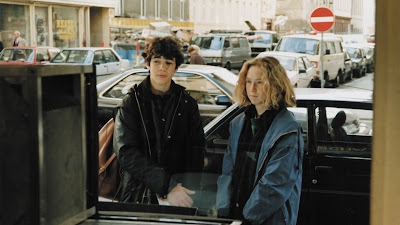 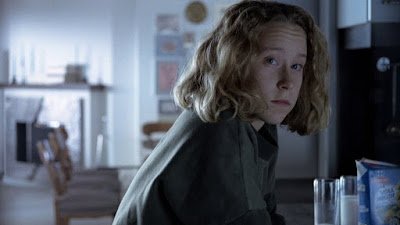 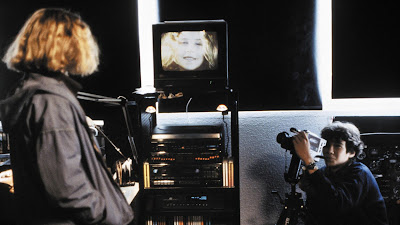 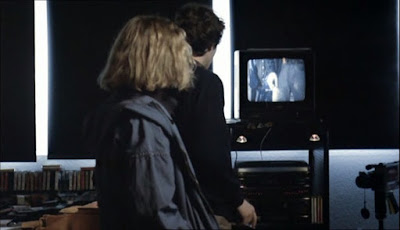 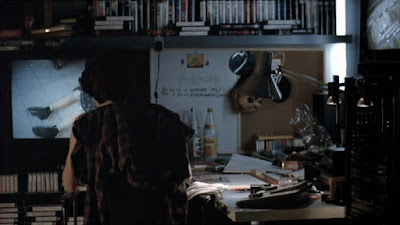 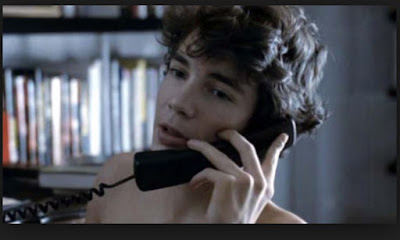 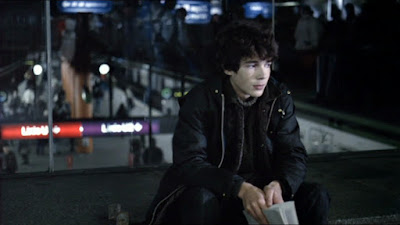 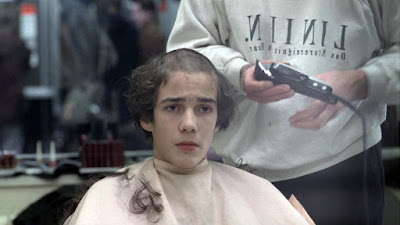 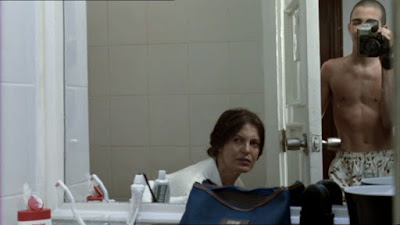 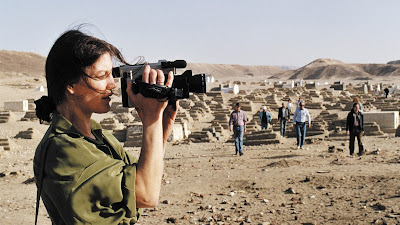 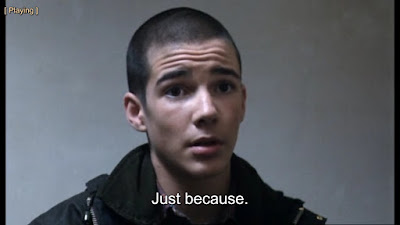 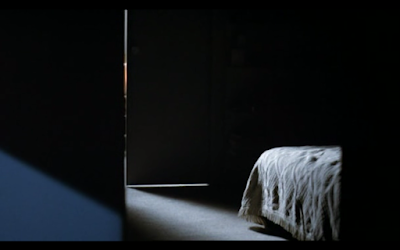 Obviously, in Benny’s Video and Funny Games I attempt to explore the phenomenon of television…I am most concerned with television as the key symbol primarily of the media representation of violence, and more generally of a greater crisis, which I see as our collective loss of reality and social disorientation.  Alienation is a very complex problem, but television is certainly implicated in it.  We don’t, of course, anymore perceive reality, but instead the representation of reality in television.  Our experiential horizon is very limited.  What we know of the world is little more than the mediated world, the image.  We have no reality, but a derivative of reality, which is extremely dangerous, most certainly from a political standpoint but in a larger sense to our ability to have a palpable sense of the truth of everyday experience.
—Michael Haneke, March 8, 2004 interview with Christopher Sharrett,  Kinoeye | Austrian film: Michael Haneke interviewed

One of the intriguing aspects about Michael Haneke is just how late he got into the game, as he was 46 years of age when he started work on his first feature film, having spent more than two decades writing plays and working in television, where surprisingly he was born before Rainer Werner Fassbinder, Wim Wenders, or even Werner Herzog, all significant forces in the German New Wave of the 70’s, while Haneke was not at all a factor.  His surge of influence came later, perhaps described as post modernism, examining the human condition, including major themes like suicide or murder, but doing so in a way outside all established norms, directly confronting audiences, where he has a way of implicating them into his films, leaving questions unanswered by the end, forcing viewers to make their own moral choices about right and wrong.  He built a cinema of cruelty and discomfort, showing graphically disturbing adult content onscreen, which in itself is questionable, using exploitive imagery that crosses all boundaries of good taste, which disgusts some and creeps out others, but it serves to provoke audiences into extreme reactions.  In just his second film, the opening few minutes tells the story, as it amounts to a snuff film, with Benny, a young Arno Frisch, who we would see again in Funny Games (1997), arguably the most thoroughly despicable character in the annals of film history, does a dry run for that role here as a menacing 14-year old kid obsessed with videotaping everything, including the killing of a farmyard pig, with a captive bolt pistol to the head, which he then rewinds and watches again in slow motion and freeze frames, including the auditory wailing of the animal.  So yes, Haneke is the guy that made that film.  The audience is jolted into an awkwardly discomforting position in the opening few minutes of the film, already squirming in the hideous fascination with death.  While Fassbinder was driven to analyze the origins of the German Nazi in his massive TV mini-series BERLIN ALEXANDERPLATZ (1980), using Franz Bieberkopf as his ordinary man who is capable of making that transition, now with this film Haneke has created his own making of a Nazi in contemporary German society.  In this case it’s not based on poverty and class oppression, or extreme deprivation, but comes from the rich and affluent class, as they’re the ones that never hold their kids responsible for anything, but allow them to literally get away with murder.

While Haneke is a proponent that violent images on television or video games have an impact on society at large, contributing to a dehumanized effect, developing an appetite for greater and more destructive violent imagery, using Hollywood as the prime example, where after a while viewers grow numb to the impact, creating a fractured psychological fissure suggesting an absence of moral judgment, becoming more and more immune to behavioral consequences.  Films that were shocking in the 90’s are much more commonplace in today’s world, where there’s even terminology to describe it as torture porn, becoming a genre for cinema export. Because the world around us contains violent and disturbing war imagery that seems to play continuously on television news reports, including Bosnian atrocities shown here, Haneke suggests there is a direct correlation in the viewer’s ability to process this information, as some seem to feed off the violence, making them more prone to violent outbursts in their own behavior as well.  In America, for instance, how many school shootings have there been since Columbine?  Actually the number is 208, to be exact, as of February 2018, averaging one a week in the year 2015, (Parkland to Columbine School Shootings List | Westword, also School Shootings Since Columbine: By the Numbers - ABC News), where they have become so frequent that often they’re not even reported in the news anymore unless the casualty numbers are extreme, most with no prior criminal records, not even an arrest, where more than two-thirds of the offenders obtained their guns from a relative or from home.  In Benny’s case, he stole the bolt pistol from the farm, placing it in a drawer in his room for safekeeping.  What brief images we get of Bennie at school suggests he’s nonchalantly arrogant, viewing himself with a superiority complex, running a financially successful pyramid scheme, thinking he’s the smartest person in the room.  At home to wealthy parents, he’s the picture of polite obedience, sitting at the breakfast or dinner table, keeping his thoughts to himself, revealing little to nothing, retreating to the isolation of his room, which has been reconfigured to his liking, keeping the window curtains drawn, and a surveillance camera pointing down to the streets, with another live camera stream capturing any activity in his room, such as guests or visitors, with plenty of viewing screens for his pleasure.  When left alone, which is often, loud heavy metal music can be heard on full blast while he sits and does his homework.  Benny has an older sister Evi (Stephanie Brehme) who lives outside the home, but takes advantage of their parent’s absence with a huge party on the premises, having to answer for it afterwards with little to no consequences.

Benny is a regular visitor at a local video store, where his taste for recklessly violent videos comes as no surprise, yet the film documents the banality of the ordinary routine, returning older videos, checking out new ones, each transaction written by hand on a company invoice, where we also see a brief exchange of money.   One day, when his parents are away for the weekend, he notices a girl (Ingrid Stassner) standing outside the video store at the window looking in, inviting her home, treating her to some reheated frozen pizza before showing her the pig video.  Not at all repulsed by it, so he pulls the bolt gun out of his drawer and teases her with it before shooting her offscreen, all captured by his live video screen.  Her cries and screams are heard constantly while he attempts to shut her up, yet reloads at the same time, shooting her again.  Her shrieks only increase in volume, which seems to set him into a panic, both drowning in hysteria before he silences her with a third shot, all happening just offscreen.  In the aftermath, he couldn’t be more casual, slipping into the kitchen for something to eat, wiping up blood on the floor, moving her into a closet where she is wrapped in plastic.  When he gets a call from a friend, they go out to watch a live band, spending the night at his friend’s place afterwards before returning back home.  Before he does, however, he gets a buzz cut, the preferred favorite of neo-Nazi’s, and the typical look behind being called skinheads.  After a brief lecture from his father about his hair, Benny shares the video with his parents, who are utterly shocked by what they see, but simply put him to bed without a word, before discussing the ramifications among themselves.  Georg, Ulrich Mühe, who returns as the beleaguered father in FUNNY GAMES and again as a sympathetic East German Stasi agent in THE LIVES OF OTHERS (2006), and Anna (Angela Winkler) attempt to rationally analyze their options, discussing the pros and cons with the same logic as if they were making a business decision, with Georg attempting to remain calm and unemotional, while Anna breaks into awkward smiles that suggest her own unease.  As he gets into meticulous detail about what they must do, it all sounds so scientific, without any thought whatsoever about the girl, or her family, or even their own son, for that matter.  As it is with most crimes, the cover-up is even more appalling, because those are supposedly the adults in the room.  With self-preservation taking center stage at the expense of all else, Georg sends Benny and Anna on a luxury trip to Egypt, supposedly for a family funeral, but it’s a ruse to give Dad a chance to dispose of the body and clean up afterwards, removing all evidence of a crime.  With Egypt being the cradle of European civilization, the irony is not lost on viewers, as the culture of human development has evolved into elaborate cover-ups for sophisticated crimes.  A glimpse of a reformed Benny near the end as a choir boy singing in church is perhaps too big a stretch, but the chilling finale is icy cold.  While overly grim and depressing, not really proving anything, the film reveals the raw amateurishness of an early career effort, where moral outrage feels more like a sermon, as Haneke literally rubs viewer’s noses with repeated images of the crime, watched afterwards by Benny again and again, literally rewinding the story and beginning again, a precursor of what’s to come in the more definitive Funny Games (1997), all implicating the viewer in the lapse of moral clarity.
Posted by Robert Kennedy at 12:00 AM