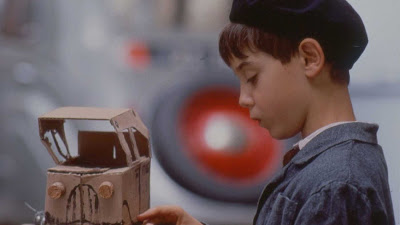 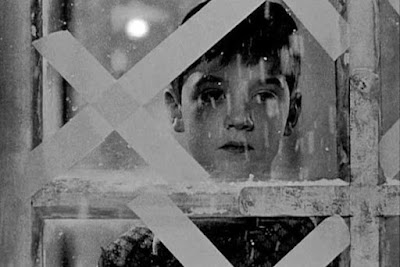 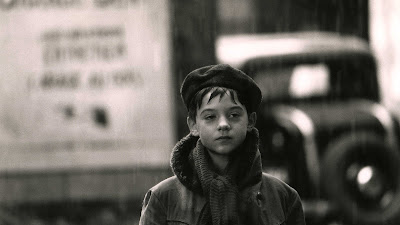 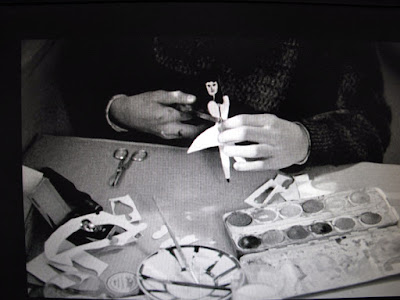 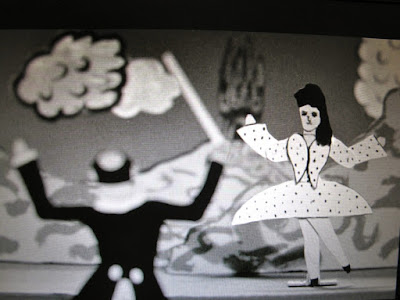 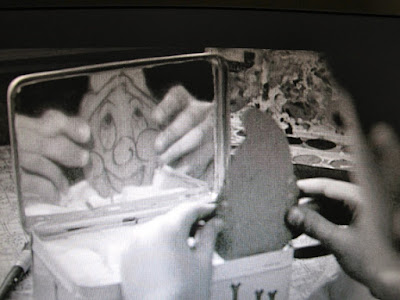 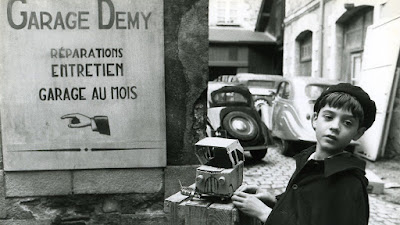 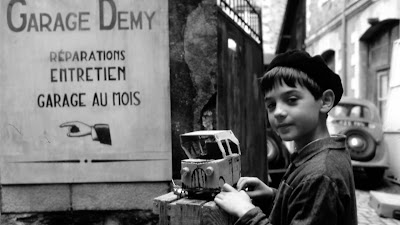 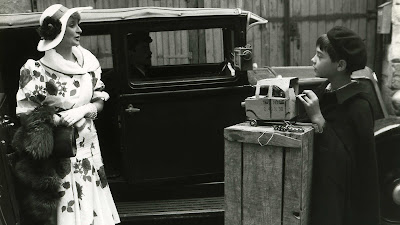 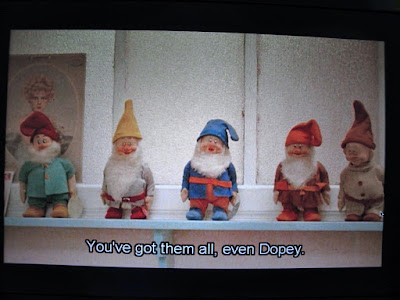 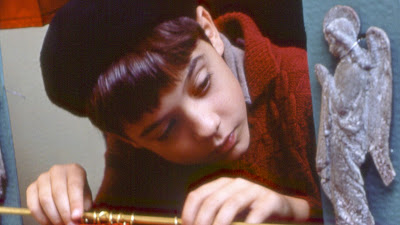 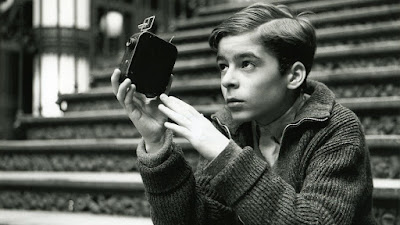 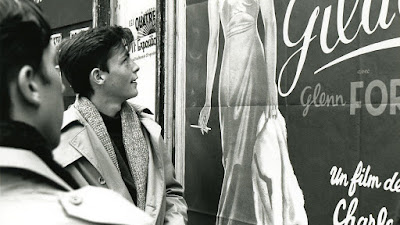 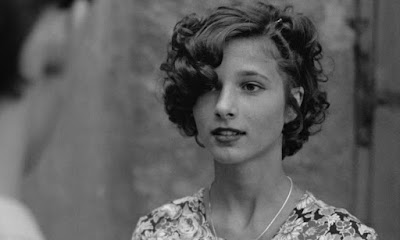 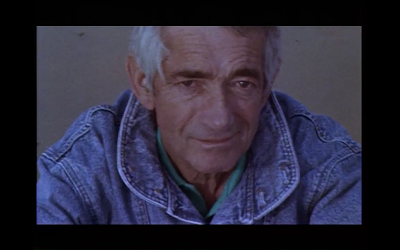 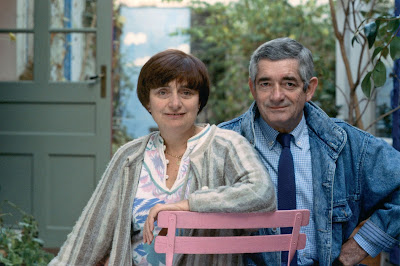 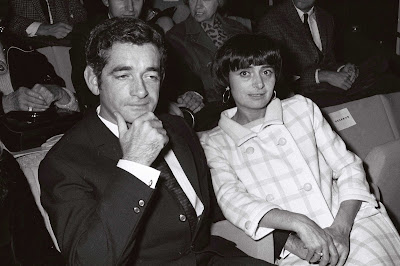 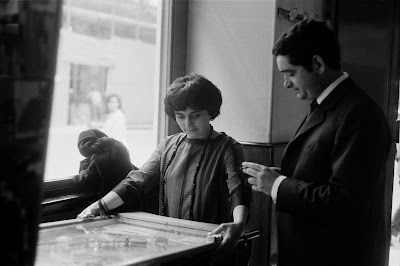 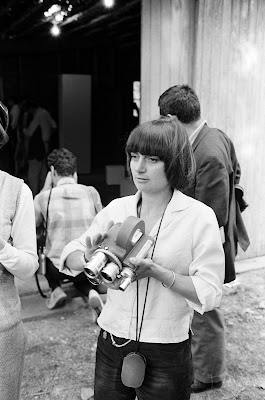 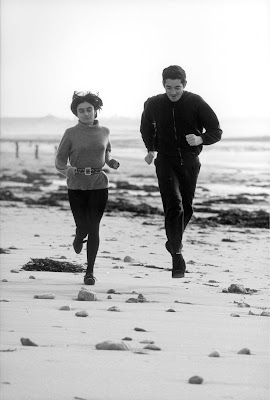 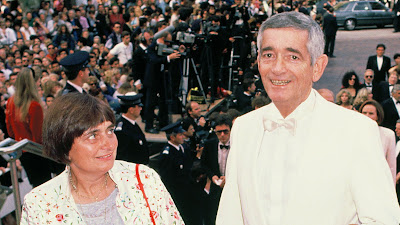 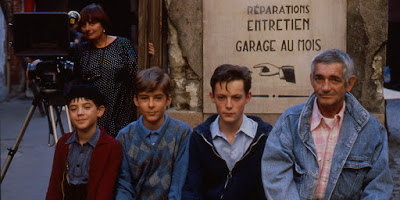 Jacques Demy with the three actors playing him as a youth 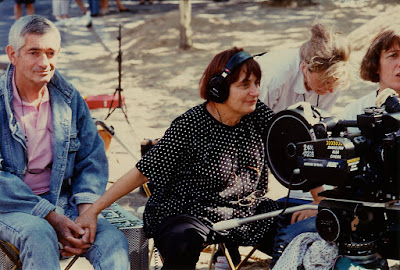 In this difficult time, this hard road he was on, all I could do was stay by his side, be as close to him as possible.  As a filmmaker: my only option was to film him in extreme close up: his skin, his eye, his hair like a landscape, his hands, his spots.  I needed to do this, take these images of him, of his very matter.  Jacques dying, but Jacques still alive.
―Agnès Varda

An elegiac tribute to the life of filmmaker Jacques Demy, married to Varda for 28 years, with at least two separations during Demy’s Hollywood experiences in the late 60’s and early 70’s largely due to his bisexuality, yet as he was dying of AIDS he recalled the experiences of his youth, his formative years, which Varda lovingly transcribes into this film, turning a memory piece into a portrait of an artist as a young man, recalling Demy’s happy childhood where the family frequently sang around the dinner table.  The older of two brothers, he had the run of the place, hanging out at his father’s garage next to their home where he worked as an auto mechanic (Daniel Dublet) while his mother (Brigitte De Villepoix), who also worked as a hairdresser, sold gasoline on the street out front, occasionally interrupted at dinner by a customer in need, seen rapping at their window.  Shot in the same garage where his father worked, all overseen by Demy, the attention to detail is stunning, including the sounds and songs, where viewers are suddenly transported from the black and white memory footage to the glorious technicolor scenes from Demy’s The Umbrellas of Cherbourg (Les Parapluies de Cherbourg) (1964), where songs erupt from under the hood of a car, aided by the music of Michel Legrand, turning his recollections into a daring artform that became an international audience sensation, winning the Palme d’Or at Cannes, where the past and future are beautifully interwoven into the fabric of this film, with Varda and Demy combining their talents in this evocative film reconstruction.  Set in the town of Nantes on the Loire River not far from the coast of Brittany, it has a small town feel with kids from the block all playing together, where their favorite activity was visiting the puppet shows.  In this regard, Demy’s youth resembles the childhood of Truffaut in The 400 Blows (Les quatre cents coups) (1959) as well as Ingmar Bergman in FANNY AND ALEXANDER (1982).  Both Demy and Bergman recreated their own puppet theaters, using cardboard boxes, cutting out a stage, designing their own puppets, costumes, and theatrical props, basically memorizing the dialogue from watching so many shows, then offering performances to smaller kids.  His imagination went through the roof after seeing Disney’s SNOW WHITE AND THE SEVEN DWARFS (1937), struck by the magic of cinema, obtaining a cheap projector and an overviewed Chaplin short that he watches incessantly, eventually scraping off the film and drawing his own images directly onto the print, fascinated to watch it run through the projector, which he enthusiastically shares with his family.

Using three different actors to play Jacques, or “Little Jacquot,” as he was called then (Philippe Maron, Edouard Jocbeaud, and Laurent Monnier), he has a singleminded obsession with theatrical performances and cinema, toying with what he can do, finding a hand-wound camera in a junk shop, trading some books and games for his first camera, moving up into the attic for his own movie studio, sharing space with stored tires for the garage, designing paper dolls on a cardboard stage, snapping a photo with a slight movement, taking hours to produce just seconds of film time, yet he discovers the miracle of movement by making stop-action animated films.  At one point he even discovers pulley levers to recreate a moving crane shot, yet when we view the finished product that shot is mysteriously missing.  Quite a few errors occur in his early development, but he learns from his mistakes, even casting friends from around the neighborhood, devising costumes for them to wear in small-scale productions.  Throughout these personal adventures, Varda cleverly flashes forward (with an animated finger alerting viewers), using choice clips from Demy’s films, adding an autobiographical element to his stories which are drawn from his own life experiences.  Easily the singlemost affecting event is the war, including the German occupation of France, forcing Jacques and his family to flee into the countryside of his grandparents, returning later when things have settled down.  But citizens are rounded up and kidnapped by the Germans for forced labor, as he witnesses air raids, bomb shelters, and traumatizing deaths that leave him shocked by the cruel barbarism, forever swearing off violence for the rest of his life.  One of his more potent memories is witnessing a paratrooper falling from the sky while sitting in class at school, all swarming towards the window to get a look, but it’s a sign of the allied presence that eventually turned the war, with American sailors seen on the streets.  The aftermath is not easy, as Jacques’ father wants him to attend trade school to learn to become a mechanic, which is a useful occupation, but Jacques dreams of making movies, spending all his time locked up in the attic, withdrawing from reality, living in his own private fantasy world, but he’s forced to attend machine shop, something he has no interest or application for, yet he drearily spends his days there while also taking art classes.  One of his more vivid memories is a visit from his art teacher into his home, agreeing that the boy has talent, but advising against a film career, as “many are called but few are chosen”

The opening of the film is a painting of two naked lovers on the shore, shot in extreme close-up in a slow pan as Varda reads a verse of Baudelaire poetry, with the images accentuating the spoken words, with the phrase “I know the art of evoking happy moments” leading into the happy young childhood of Jacques, evoked by a shot of him staring out the window as snow gently falls outside, making a connection to the transcendent ending to The Umbrellas of Cherbourg (Les Parapluies de Cherbourg), set here to the sublime music of Bach’s Jesu, Joy of Man’s Desiring, Dame Myra Hess plays Bach- Jesu, Joy of man's desiring ... YouTube (3:34), which recurs again late in the film, a haunting depiction of mortality.  One of the more poignant early memories is visiting his grandfather’s grave and noticing his name on the tombstone, a startling realization, offering a surreal, out-of-body moment, as he’s the man Jacques was named after, but it’s also a curious symbol for mortality, with themes sprinkled throughout the film, bookended in the opening and closing by views of him on the beach in the present nearing the end of his life.  For the most part, Varda narrates the story, but occasionally Demy intervenes and recalls his own youthful memories, with the camera lingering on him, panning his skin in extreme close-ups, as if gazing at him one last time.  It’s no accident that the combined forces of the two artists create a more heartfelt depiction of a young man’s struggles to become an artist, adding extraordinary depth of character and insight to his life’s journey, beautifully captured by a loving wife who wants to share his life through eternity, singing a song in the finale, immortalizing him through the power of cinema.   His inner drive and vigorously youthful spirit is the most appealing feature of the film, driven to explore his own obsessions, fascinated by a theatrical world of cinema and song, drawn to Hollywood, becoming something of an expert on film, offering his views on what’s playing in town, intimately familiar with the various techniques of the directors, making the best recommendations for his friends.  While Jacques always had admirers, including the flirtatious gestures of a pretty girl next door named Reine (Marie-Sidonie Benoist), who eventually gets pregnant on her own, mirroring the life of Catherine Deneuve in Umbrellas, he also had supporters that ended up making a huge difference in his life.  If it weren’t for the recommendations of French director Christian-Jaque while passing through town, advising his father that he attend film school in Paris, his life might have been altogether different, but that finally convinced his family of his true calling.  And film school is where he met his bride to be, who is never shown onscreen, as the film only reaches the point where he finally realizes his dream, becoming a cinematic love letter to her husband in his final days, passing away just days after completion.  It remains an eloquent remembrance of his life, an exalted and poetic farewell visual memoir.
Posted by Robert Kennedy at 12:00 AM