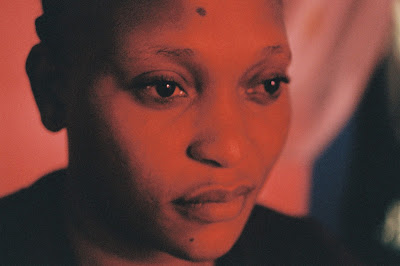 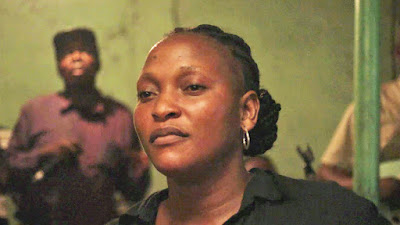 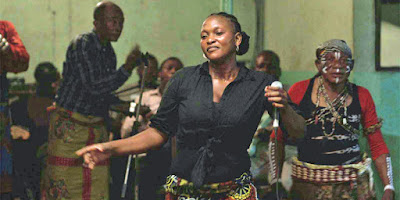 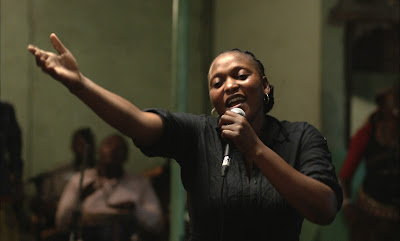 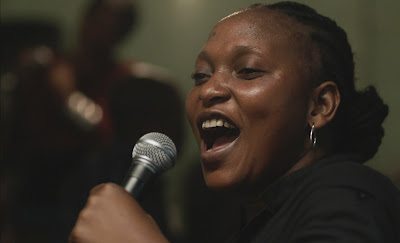 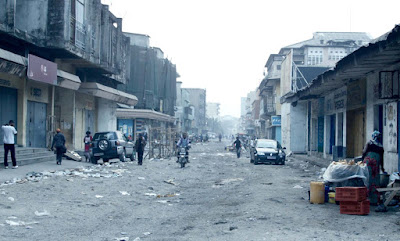 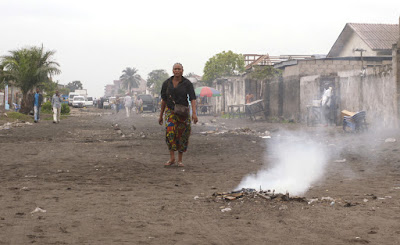 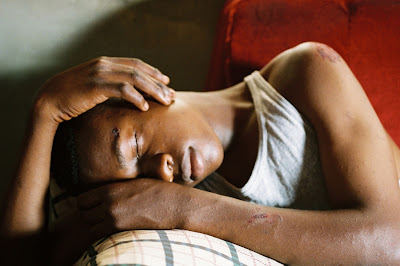 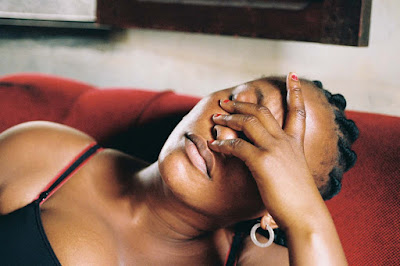 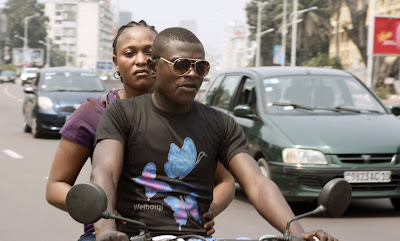 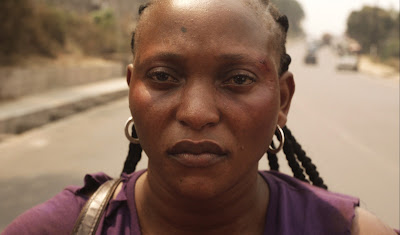 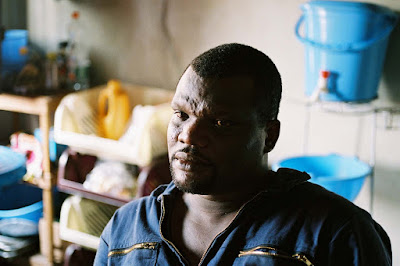 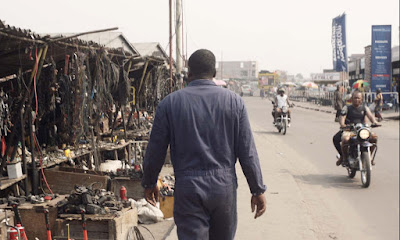 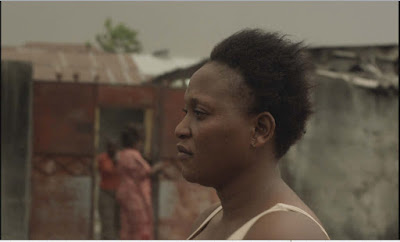 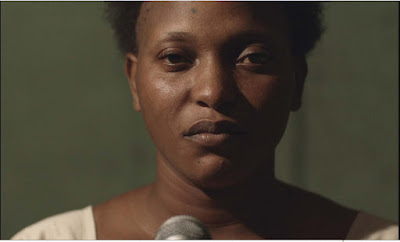 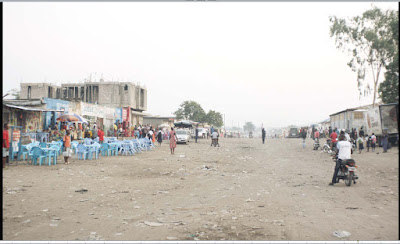 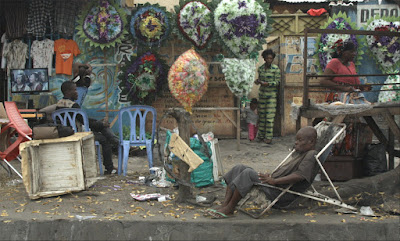 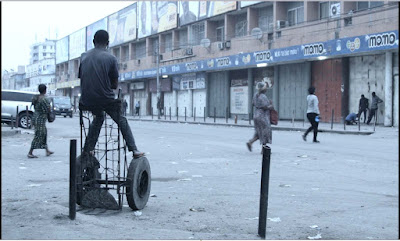 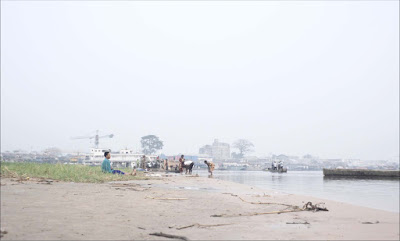 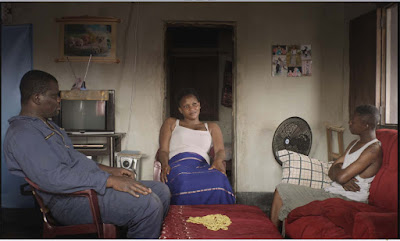 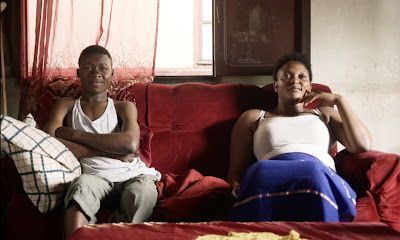 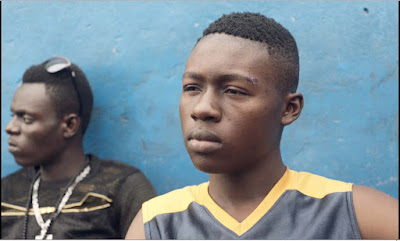 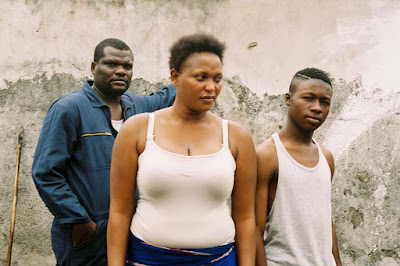 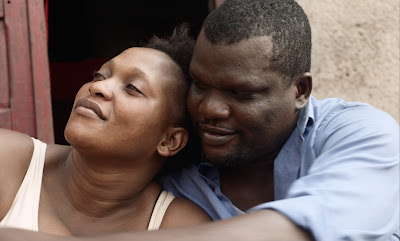 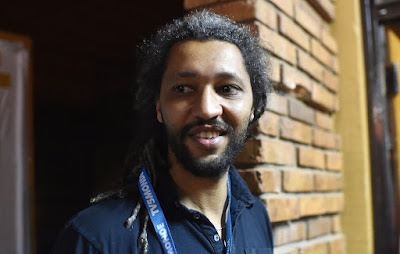 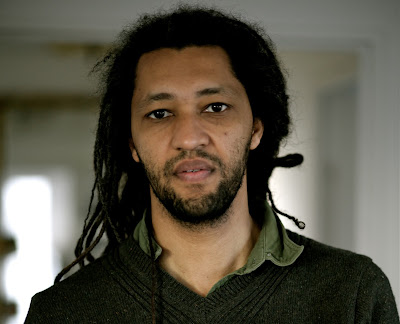 Winner of the Silver Bear (2nd Place) at the Berlin Film Festival, and among the nine finalists for Best Foreign Picture, this film takes place in Kinshasa, the post-colonial capital of the Democratic Republic of the Congo, shot with a cinéma vérité style by French cinematographer Céline Bozon, whose handheld shots of the cluttered city streets are transporting, literally immersing viewers into the heart of Africa.  But this is largely a character study of Véro Tshanda Beya Mputu as Félicité, a fiercely independent Afropop singer fronting the Kasai Allstars in a small Kinshasa night club that pulsates with drink and noise and rowdy customers, but music is the lifeblood of the city, providing a feeling of gritty authenticity in a faraway region of the planet.  In fact, the film seems to have been written with this musical group in mind, a composite of five different ethnic groups from the region, each with their own language and musical traditions, seen in performance here Kasai Allstars - "Drowning Goat (Mbuji Mayi)" - YouTube (9:55), but the soundtrack can be heard on Spotify, Around Félicité by Kasai Allstars on Spotify, yet their constant presence throughout the film is such a distinguishing feature, along with a local orchestral group seen elsewhere playing several passages from the symphonic music of Arvo Pärt, from the familiar refrains of Fratres (10:39), heard in films like WINTER SLEEPERS (1997), There Will Be Blood (2007), The Place Beyond the Pines (2012), and The Club (El Club) (2015), to a chilling liturgical work, Orchestre Symphonique Kimbanguiste / My Heart's In The Highlands (2:28), where the stark cultural contrast between Europe and Africa couldn’t be more remarkable.  This music frames the film, adding color and texture to the resilient story of Félicité, a larger-than-life figure whose freedom is challenged by a series of tragic events that tests her endurance, that chops her down to size, leaving her mortally wounded and exposed, never more vulnerable, even humiliated, where her unconventional response is not what you’d think, finding her own way to survive through a minefield of patriarchal oppression designed to diminish her spirit and leave her defeated.  Yet somehow in a landscape of rampant poverty and overt sexism, she endures, where the exhaustive Odyssean journey typifies her perseverance and enormous willpower, summoning untapped reserves of inner strength through the power of mythology and ancestral appropriation, as elements of the surreal mix with a searing social realism, creating an extraordinary synthesis of mind, body, and soul to recapture the essence of her indomitable spirit.

This is a film where art is viewed as nourishment for the soul, particularly in the use of music, literally providing sustenance to the needy, allowing society’s fallen figures to draw strength from the vast reservoir of Kinshasa music, tapping into a cultural vein as needed, helping fuel their recovery.  At the outset, Félicité is a single mother raising a 14-year old son Samo (Gaetan Claudia), having rid herself of an abusive husband, where she’s free to live the way she wants, on her own terms, independent to a fault.  Her biggest problem is a broken refrigerator, turning to a local handyman of questionable repute, Tabu (Papi Mpaka), as he’s a loudmouth at the club, seen as something of a drunken rabble rouser in the earlier nightclub sequences, but everyone has a right to earn a living.  Promising a new working fridge for $150 dollars, she’s particularly hard on him, despite his burly frame and poetic charm, somewhat dazzled by her oversized beauty, but she notes humorously that to her he’s still a tiny man, rushing out the door with more important things to do.  Yet the next time we see her perform, she whispers in his ear not to get drunk, as she needs his equipment to work.  In this manner, she allows him into her life, amused by his headstrong pursuit of her charms, where she’s willing to give the guy a chance despite his shady reputation as a drunk and a womanizer.  They have an easygoing manner about them, but it’s clear she’s the boss, the stronger of the two, with an acid tongue, yet her fiery resolve is exactly what he adores about her.  The same could be said for the director, as initially this actress was chosen to play a minor role, but Gomis became more and more intrigued by her, fascinated by her irrepressible screen presence, eventually crafting the entire film around her beguiling persona, while at the same time expanding the repressive limits of questionable Western standards in considering a more healthy image of a leading female role.  But her world crumbles when she’s notified that her son was in a serious motorcycle accident, lying in bloodied bandages at the hospital where patients are stacked up next to one another.  Immediately she discovers the Kafkaesque Congolese system of medical care, as it’s provided on a cash up front basis, as he will be moved to a better room, or provided the needed medications, and even the necessary surgery to repair a broken leg only once she produces the money.  This kind of dilemma can bring a family to financial ruin.  Making matters worse, she is fleeced out of the pharmacy money by another woman sitting at the bedside of the neighboring patient, who graciously offers to run the errand for her, but never returns.  Her trust was earned through a con act, pretending to be the relative of a sleeping patient, but once he awakes, he hasn’t a clue who she was.

With that, Félicité’s spirit is tested like never before, as her son’s health depends on her, racing against time, revisiting friends and family, including the musicians she works with, where her door-to-door mission is similar to Marion Cotillard in Luc and Jean-Pierre Dardenne’s Two Days, One Night (Deux jours, une nuit) (2014), literally begging others for help, but still coming up short.  It alters the rhythm of the film, adding a despondent tone of gloom, scrounging for what little she can rustle up as she visits the various neighborhoods of the city, offering a panoramic view of the African world, showing bustling streets with plenty of activity, including the brutal beating of a petty thief, becoming crushed when people are unable or unwilling to help her, like her ex-husband who gloats at her weakened disposition, taunting how she used to be so proud, sneering at how “You puffed out your chest.  You wanted to be a strong woman,” feeling triumph now that she is on her knees, reduced to begging, showing no mercy, treating her with utter contempt, blaming her for failing their son, who continues to lie in filthy conditions, becoming a crisis of confidence, enveloping her world with a profound sadness.  Out of pure desperation, having nowhere else to turn, she arrives at the door of a local gangster pretending she has some urgent business with him, who throws her out when he sees what she’s up to, but she clings to the feet of the security detail, getting battered and beaten, wailing at the top of her lungs, causing such a commotion that the man pays her off just to get rid of her.  By the time she finally arrives with the money, she discovers her son’s condition took a turn for the worse, losing plenty of blood, where they were forced to amputate his leg to save his life.  Both she and Samo are heartbroken, falling into a deep depression where dialogue becomes superfluous, as Félicité traverses an abstract spirit world, exploring a darkened forest in a dreamlike nocturnal night with barely visible images, entering a shadow world, much like the Orpheus underground of Jean Cocteau, wading into water, crossing a wide river, eventually encountering a mythical animal, an okapi, on the other side, which she embraces, blending the surreal with the real, as if purging her sins, adding a mystical element of transformation.  In what is largely a realist drama, this is a particularly alluring aspect of the film, adding magical elements that permeate through the recovery process.  With Tabu’s help, he carries her son home from the hospital, but he refuses to even attempt to use the crutches, instead drowning in his own self-pity.  Tabu has a quiet influence, however, adding warmth, being there as a non-judgmental paternal example, not making any demands on either Samo or Félicité, allowing them to make their own way, with Félicité finally acknowledging, “I like your way of being,” even as she finds another woman lying in her bed.  Tolerance has its virtues, as the music heard throughout adds its own healing force, providing a recuperative power that allows both to recover, finally fixing that damned refrigerator by the end, coming full circle, delivering a hard-earned smile.  This is an unsentimentalized film about facing one’s hardships, where even the loftiest souls among us must come down to earth and face their own spiritual resurrection.
Posted by Robert Kennedy at 12:01 AM