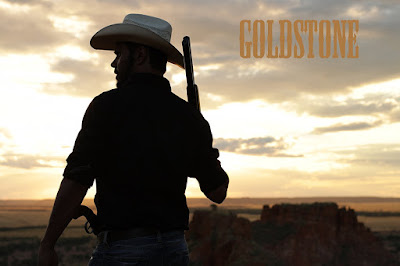 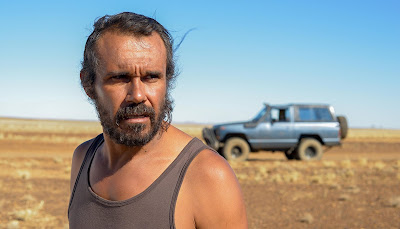 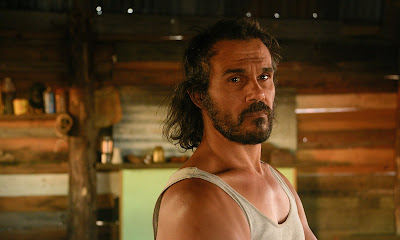 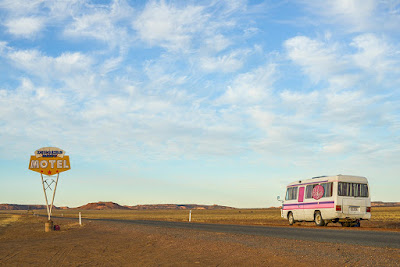 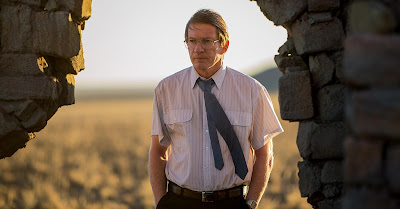 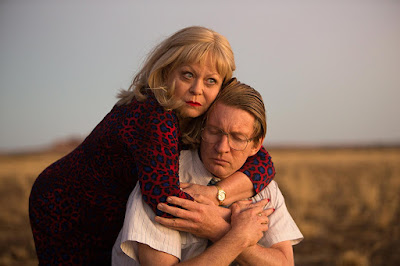 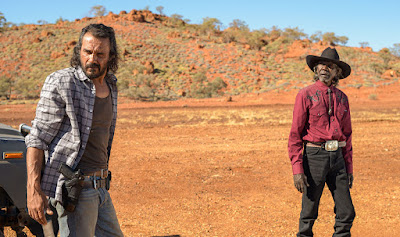 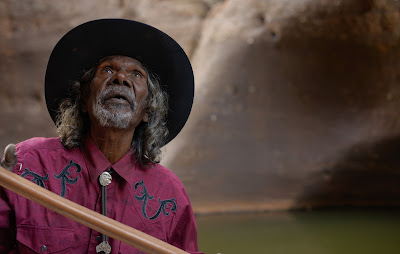 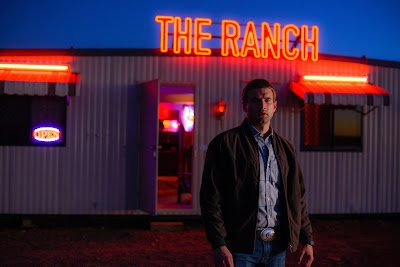 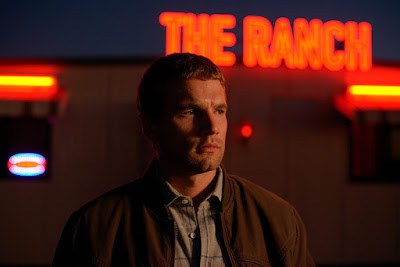 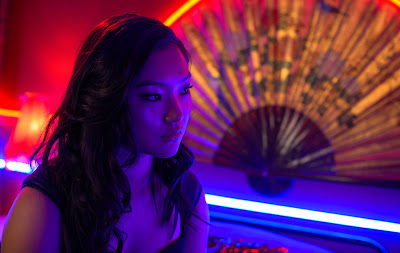 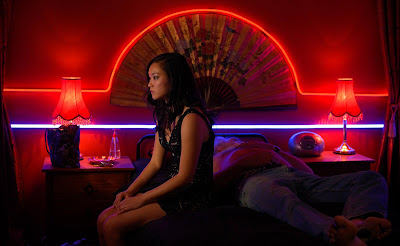 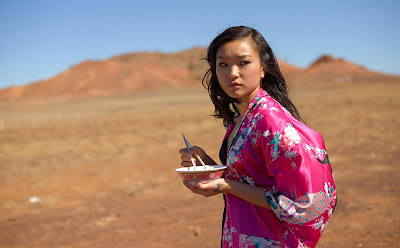 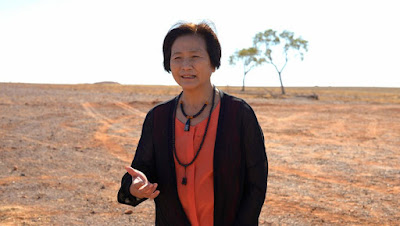 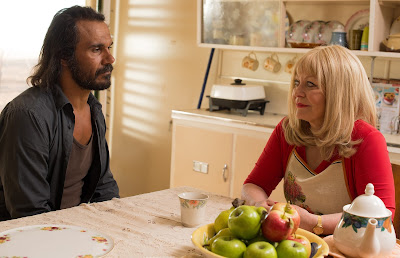 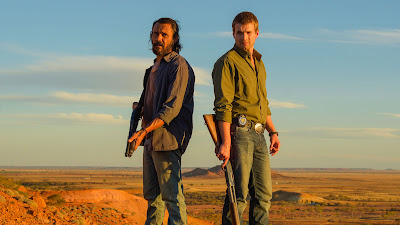 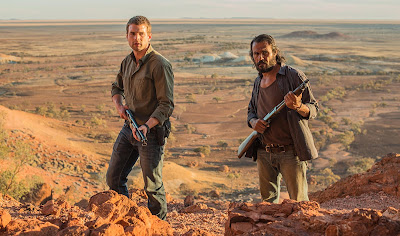 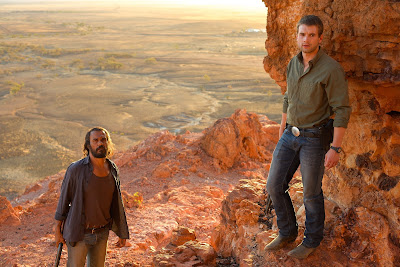 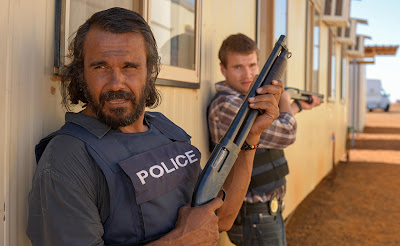 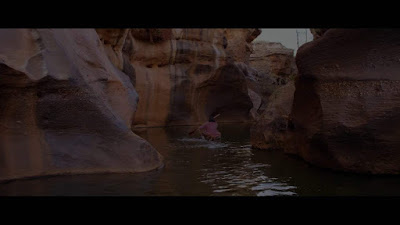 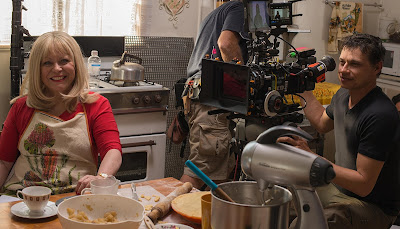 Director Ivan Sen on the set with actress Jacki Weaver 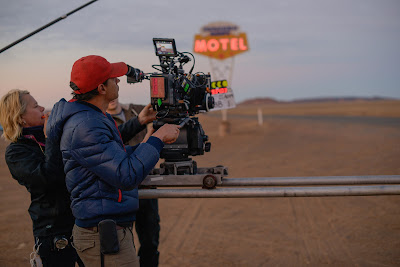 Like the Tony Hillerman detective stories taking place on the Navajo Indian Reservation that show insight into what it means to be an Indian in the 21st century, several filmed by Chris Eyre, a Cheyenne-Arapaho Native American, including SKINWALKERS (2002) and A THIEF OF TIME (2004), with more than a few similarities to Taylor Sheridan’s Wind River (2017), this film offers an Indigenous perspective in the remote Australian outback, creating a clash of racial and cultural interests, featuring an oppressive film noir atmosphere that literally reeks with malice.  In a follow-up to his hugely successful earlier film MYSTERY ROAD (2013), Aaron Pederson returns as Indigenous detective Jay Swan who enters the murky waters of a land that has been compromised for well over a century, evidenced by sepia-toned archival photographs that open the film, which resemble similar American photographs of the first railroads being built across an open frontier, which included a mysterious Chinese presence that has all but been excluded from the history books.  Despite getting himself tossed into the pokey for swirling on the road and driving drunk, Swan’s introduction to local white cop Josh Waters (Alex Russell) is a contentious one, searching for a missing Chinese migrant girl, continually warned that he doesn’t belong there and that he should turn back around and head home.  Literally every single white person he meets offers this exact same advice, all of which suggest a small cabal of nefarious criminals and thieves.  With much of the land fenced and declared off-limits, containing extensive mining deposits, where dynamite blasts are a regular occurrence, Swan’s rented trailer out in the middle of nowhere is shot up by a greeting biker gang party that officially sends the message that he’s not wanted around there.  To his credit, Swan is not deterred, a man of few words, in the Eastwood mode, with Josh helping him relocate to an even more isolated cabin.  Viewers know things will get more interesting once vehicles start taking the dirt roads, which are offshoots of the more traveled paved roads, which stretch for miles in a straight line, obstructed by absolutely nothing along the way.  Sen, an Indigenous director who also writes, shoots, and edits his films, while also writing the music, likes to use aerial shots that reveal the extent of the emptiness in the vast landscapes that lead to nowhere, where the clearly visible geometric straight lines of the roads imposed by the whites is a sign of cultural oppression, as it expresses an artificial structure imposed on nature.

Swan is officially introduced to several town notables, including Johnny (David Wenham), the Furnace Creek Mine boss, who is attempting to buy, or more likely steal, huge parcels of Aboriginal land for an unspecified development project, Tommy (Tommy Lewis), the corrupt head of the Aboriginal Land Council, and then, of course, there’s that lethal smile from the town mayor, Maureen (Jacki Weaver), easily the most diabolical character in the film, all of whom make nice little speeches about how they like the way things are in these parts and they don’t need any outsiders stirring up the pot.  Swan has apparently heard and seen all this before, recognizing signs of government authorities trampling on the rights of Indigenous people, yet he’s a world weary character with a mind of his own, which includes wandering into the restricted areas where he sees a transport plane bringing a handful of Asian girls to the vicinity, signs of sex trafficking, but as Josh quickly reminds him, he has no proof.  Nonetheless, viewers see the girl’s passports taken away, as each one is paying off a family debt, essentially becoming prostitutes for the mining workers, where they are treated much like they have been for the past hundred years.  There are quirky developments that make this film interesting, as there’s a woman in a pink trailer with a neon sign that advertises Pinky’s, where she’s basically a woman for hire, but shows a cunning spirit that suggests an entrepreneurial mindset, as she’s pretty much left to operate on her own with no hassles from the police.  This little detour doesn’t get Swan any closer to his missing person, but it does offer a glimpse into Swan’s distressing past and gives him a lay of the landscape, as everybody in this town is paid off and gets a cut of the action, which allows them free access to do as they please.  Another detour leads him to Jimmy, David Gulpilil from Walkabout (1971), RABBIT-PROOF FENCE (2002), and THE TRACKER (2002), now affectionately described as the “old man,” an Aboriginal elder, a keeper of the spirits, who actually knew Swan’s father, as he was part of the “Stolen Generation,” where as many as 100,000 Aboriginal kids were abducted from their families and raised as whites.  Jimmy takes him on an exploration of a sacred site, a spectacularly tranquil creek that wanders through a breathtakingly beautiful rock formation that contains Aboriginal rock paintings, suggesting a timelessness, literally worlds apart from the corruption and utter desolation surrounding it.  It’s Jimmy’s daughter Maria (Ursula Yovich) who reminds Swan, “This land, you belong to it.”

The corruption of the region represents the colonialist mentality from the days of old, which has continued into the present, as no force on earth has stopped it.  Sen approaches the subject with an almost anthropological point of view, where the present is an extension of the past, with each character representing an historical cultural interest, where the pieces may need to be realigned.  When things don’t go the way the scheming developers planned, they resort to murderous plots and ruthless dealmaking, eradicating any obstacles that stand in the way, all of which have a smell of stench attached to them, but in this remote and underpopulated area, that has never stopped them before.  What changes is Josh, as he has a sudden shift of social consciousness and civic responsibility, developing an interest in the affairs of others, including Michelle Davidson as Mei, one of the sex workers, piqued by their obvious unwillingness to talk to him, suggesting there’s plenty more underneath the surface that he’s never bothered to consider, always looking the other way as a matter of convenience.  He never wanted to be the guy to interfere or rock the boat, and was comfortable with the laissez faire idea of live and let live.  After a series of curious inquiries about her situation, Mei, however, stops him dead in his tracks by confronting him with the ultimate question:  “If you find the truth, what will you do with it?”  This realignment of the stars eventually brings the two law enforcement officers together, reluctantly at first, but both are the only ones with an interest in uncovering the truth, though Swan’s had his finger on the pulse from the outset.  It’s the latecomer that swings the balance of power, a multi-racial task force to eradicate the evil elements, which ends up in protracted gun battles that are carefully choreographed and staged, including the infamous biker gang and other hired thugs protecting the capitalistic interests of the unscrupulous mining company and developers, who view the land as essentially worthless except for the money it can produce.  Perhaps these two guys should have joined forces at the outset, as racial stigmas and common misperceptions (not to mention payoffs) may have played into that, while nobody likes to hear someone else tell them what to do, but mutual interests finally turn the tide, becoming a rousing modern western in contemporary times.  Extremely successful in winning Australian Film Critics Association Awards, with Sen winning best director and best cinematography, Pederson winning best actor, while Weaver won best supporting actress, The Guardian (The 10 best Australian films of 2016 | Film | The Guardian) called it the best Australian film of the year.
Posted by Robert Kennedy at 12:02 AM