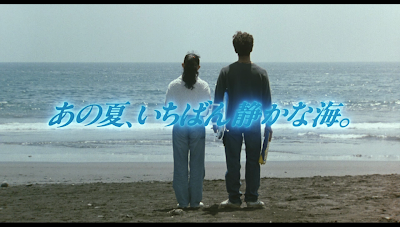 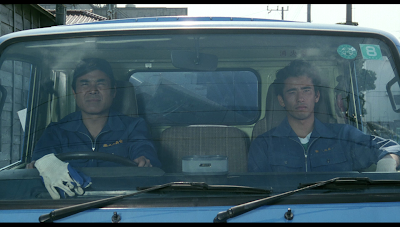 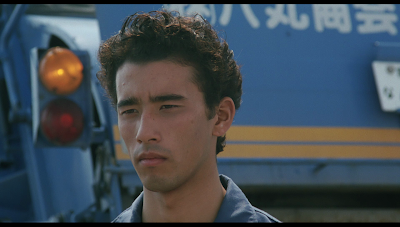 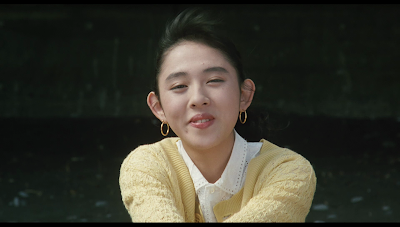 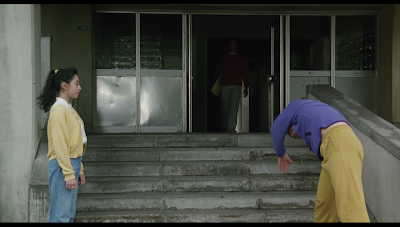 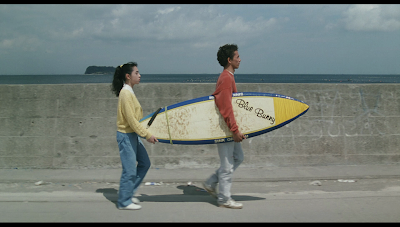 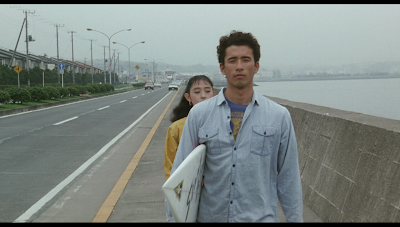 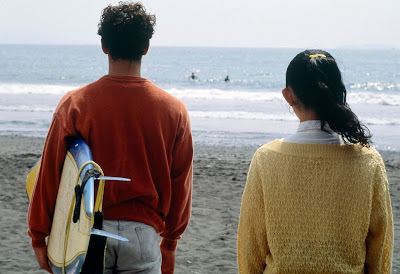 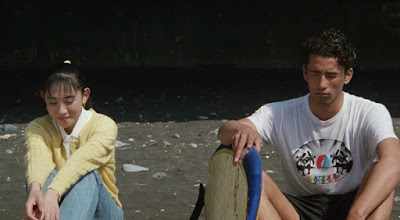 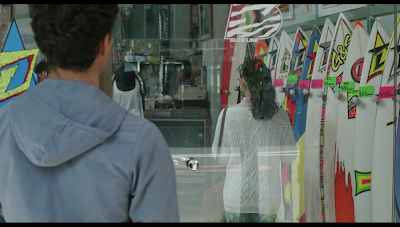 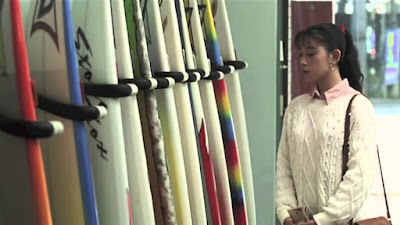 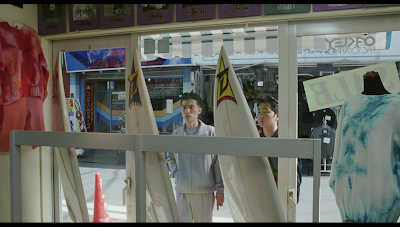 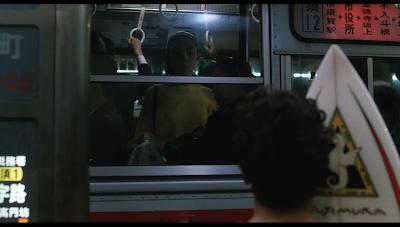 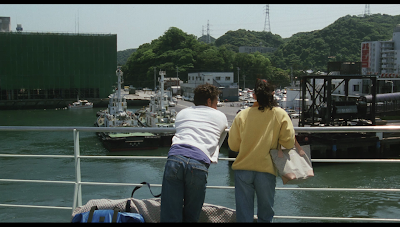 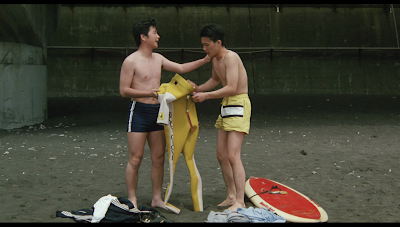 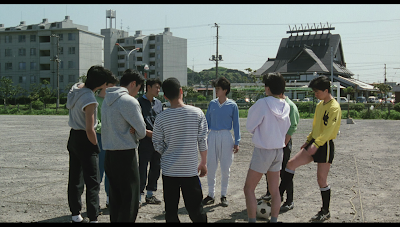 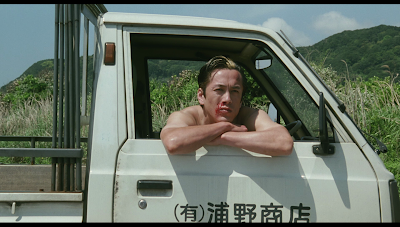 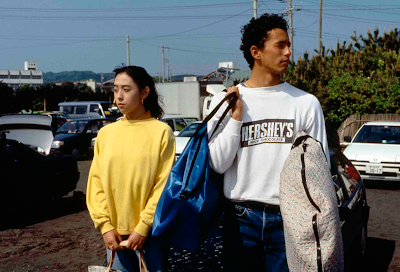 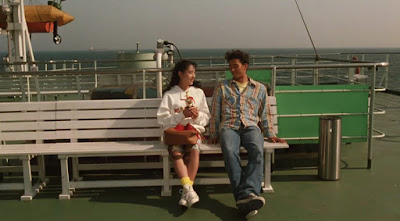 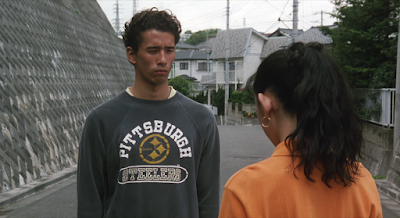 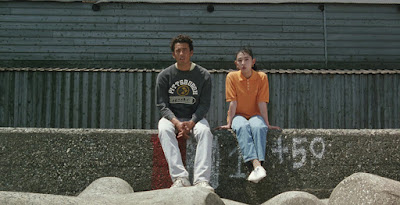 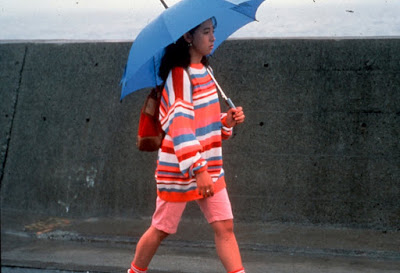 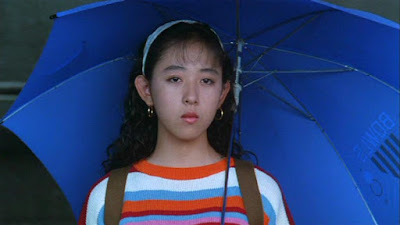 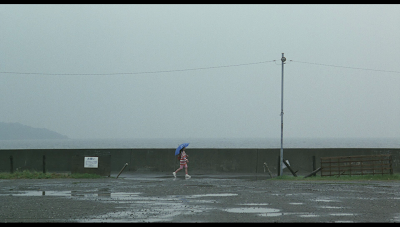 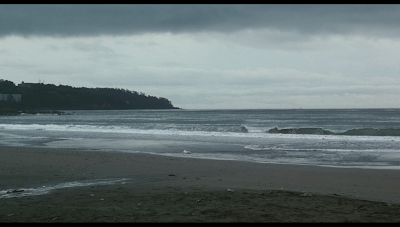 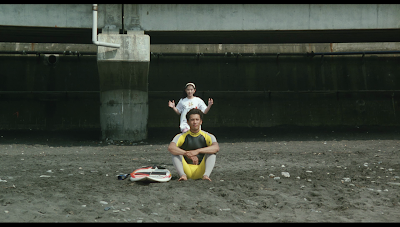 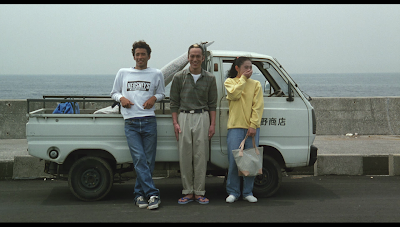 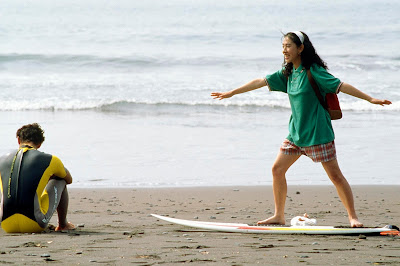 Gorgeously sublime at every turn, this is a meticulously edited Miyazaki-like film featuring the silent adventures of two young adults who are both deaf, Shigeru (Claude Maki) and his girlfriend Takako, (Hiroko Ôshima).  Never one for long speeches, Kitano has created an effortless deadpan reality with virtually no dialogue, yet the film is a study of facial expressions.  Content to marvel at seaside locations, where the bluest of blue waters literally sparkle under the sun (cinematography by Katsumi Yanagishima), the opening shot is a gaze out into the ocean.  Only a few moments later do we discover it’s the vantage point looking out the front window of a stopped garbage truck with two men in blue work suits sitting in the front seat, pausing momentarily to enjoy the view before making a right turn and disappearing behind a building to continue their route.  Fascinated by a discarded surfboard thrown out in the trash that has a broken tip, Shigeru picks it up out of curiosity, making the needed repairs, and then sets off for the beach with his girlfriend following right behind helping carry the board on the long hike, with guys on a soccer field stopping to take notice, as it’s not an everyday sight.  At the beach, fellow surfers mock and heckle him for his futility, unable to stay on the board, without a wet suit to fend off the cold, but as the days pass, he earns their respect, if only for his perseverance.  While he’s in the water, Takako carefully folds his clothes awaiting his return.  The first real sign of the film’s unique artistic vision occurs on the bus ride home, as surfboards are not allowed, so Shigeru hops off, staring in utter bewilderment at Takako standing amidst the crowded passengers as the bus pulls away, still standing in the exact same spot even after all the other passengers have exited, except for an elderly woman, who keeps urging her to sit down.  Finally exiting an empty bus, she races back in the direction from which she came until she runs into Shigeru, stopping, a bit in awe that they meet, before grabbing his arm on the long walk home — a heartbreaking scene, until they miraculously reunite.  This lengthy route connects the two, as it’s not an easy journey, but it’s one they share together.  The film offers no backstory for how they met or became friends, but they couldn’t be more adorable together.  Maki appears again in Kitano’s later film BROTHER (2000), playing a Japanese-American punk who sets out to become the leader of a yakuza gang.  The third film by Kitano following two violent epics, it’s the first that does not star the director himself, veering 180 degrees away from his established tone, while the film is scored by Joe Hisaishi, a frequent Miyazaki collaborator, adding an elegant touch of quiet innocence that also reaches transcendent heights.

A film that painstakingly establishes a rhythm of mood, beautifully capturing the essence of the lure of the ocean and the freedom that it offers, a complete contrast to the drudgery of work, where people are mostly unhappy with their routines, yet others watch in amazement as these two partners silently walk in synchronized unison, where Shigeru, always seen wearing American T-shirts, becomes more and more captivated by the sea, lost in a timeless reverie where work loses any sense of urgency, becoming less and less relevant, until it doesn’t matter at all.  Tuned into another mindset altogether, Shigeru is more concerned when his makeshift surfboard breaks, having to select another one, which only seems to emphasize his new commitment.  The social world connected to the beach is almost surreal, as surfer clubs hang out together wearing wet suits, while another novice surfer arrives with all the gear and paraphernalia, accompanied by his girlfriend, yet flops in the sand even before reaching the water, which becomes his signature trademark, with his girlfriend quickly losing interest in this guy, moving over to Shigeru, and every new surfer on the scene, asking them to peel an orange for her.  Takako is rightly indignant at this intrusion, but Shigeru is so caught up in the tranquility of the sea that he barely even notices.  Add to this a Tweedle-dee and Tweedle-dum pair of soccer players who want to see what all the fuss is about, a comical duo of misfits who can’t seem to do anything right trying to catch in on the latest phase, yet they’re inherently dysfunctional, showing little aptitude for the sport, while Nakajima (Toshizo Fujiwara), the manager of the surfer shop, who was once a surf legend, takes an interest in Shigeru, asking about his progression, offering him a wet suit for protection, even suggesting he sign up for a surfing contest.   The Chikura Surf Classics is exactly what it appears to be, a celebratory gala with plenty of like-minded surfers gathering at one location to ride the waves, each one judged competitively, with plenty of spectators showing up to watch.  While Shigeru enlisted properly, he never heard his name called out over the loudspeakers, so missed his opportunity.  When the surf manager finds out, he tells the others, “Why didn’t you look after him?” Immune to their own cruelty, they offer little more than vacuous stares in return.  Traveling by ferry along with a helpful ride on a shuttle truck, Kitano emphasizes the length of the journey, as this is a significant upgrade in his interest.  Strangely, Shigeru is welcomed into the surfer’s world afterwards, hanging out with the others, but Takako stops showing up, altering the established precision of the routine, suggesting something is a little off.

A genuinely unique take on people with disabilities, told with reverence and compassion, by accentuating lyrical simplicity, Kitano eliminates all extraneous material, concentrating instead on a minimalist depiction of character, allowing subtleties to be emphasized, where the film itself is a nostalgic look back at what happened one summer.  Stitching together small incidents, they combine to form a collective whole that offers a sweeping look at how memory and personal identity are intricately linked, showing the extreme value of the people and things we choose to associate with, where it means so much more than incidental contact.  When Shigeru tries to reestablish contact with Takako, she refuses to answer the door, shutting herself inside, alone in her own personal anguish, feeling ousted and rejected.  Forced to resort to rather ingenious methods, he brings her back into his life, picking up where they left off, seen everywhere together.  Gazing out at the timeless eternity of the blue sea, it offers a quiet antidote for the world’s ills, like a healing for one’s pain.  Kitano has always been drawn to the natural world, where the brilliant colors of the seashore never looked more impressively beguiling, used in many of Kitano’s films, like SONATINE (1993) and FIREWORKS (1997), where the bulk of the story takes place on beaches or near the sea, reflective of a meditative stillness and calm, expressing a lost reverence for life itself.  The expressionistic relationship between Shigeru and Takako resembles the almost silent but touching relationship of Nishi and his wife in FIREWORKS (1997), reaching a metaphysical level where words do not do justice, instead evoking pure love.  Given a poetic otherworldliness on display, this is as lovely and gentle a film as one can imagine, entirely appropriate for children, very much in the vein of Miyazaki animated films that typically offer a shock to the system, as something genuinely heartbreaking occurs, where kids have to adjust to something that feels threatening in real-life, adding poignancy and depth, and this film is no different, where the finale is a brilliant montage, a nirvana moment, like a mandala of enlightenment that is essentially a snapshot in time.  Few films allow the ordinary routine to reflect a kind of sacred religious embrace, certainly Bresson did it with regularity, with standouts like Diary of a Country Priest (Journal d'un curé de campagne) (1951) and Au Hasard Balthazar (1966), but it’s unique territory for Kitano, where gangsters and yakuza warlords typically fight for the leftover scraps of power.  A glorious film that belongs on everyone’s viewing list, it has the power of redemption and transformation, and may leave you thinking just a little bit differently about yourself and the world around you.
Posted by Robert Kennedy at 12:02 AM