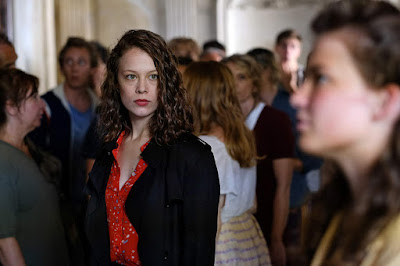 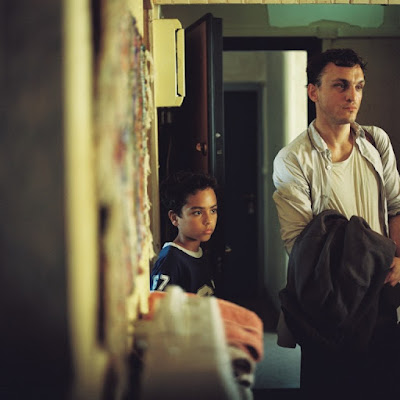 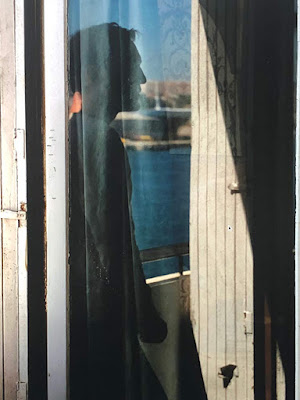 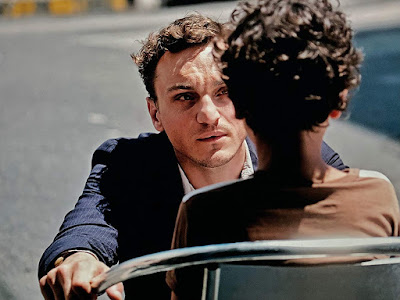 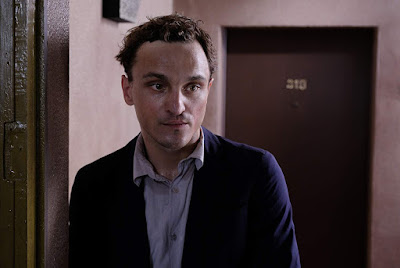 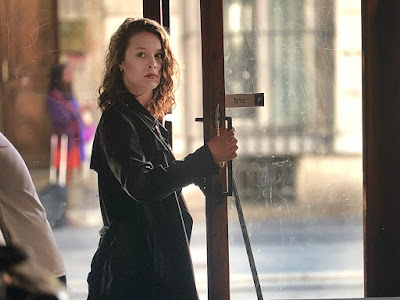 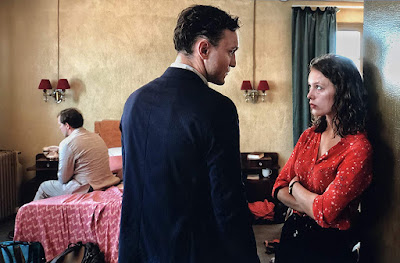 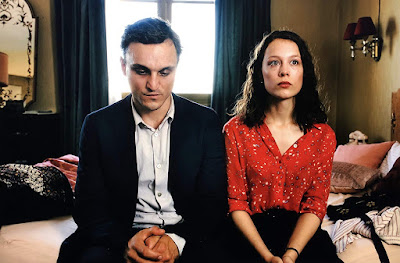 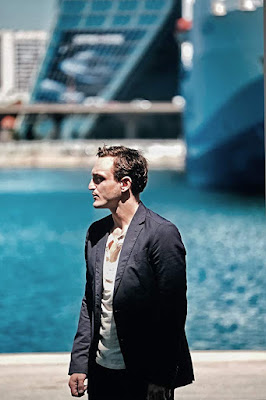 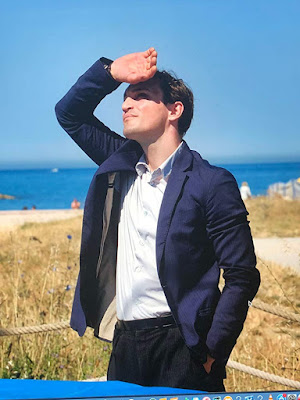 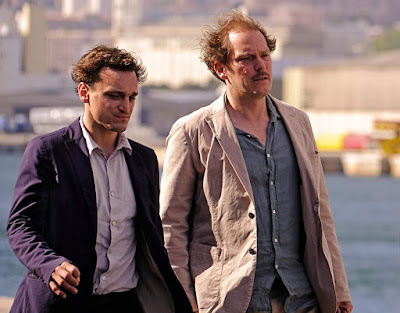 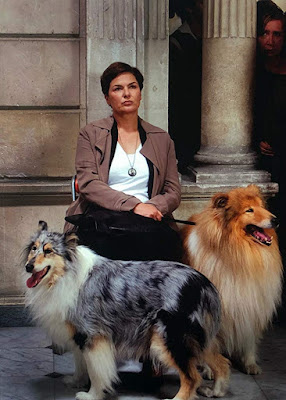 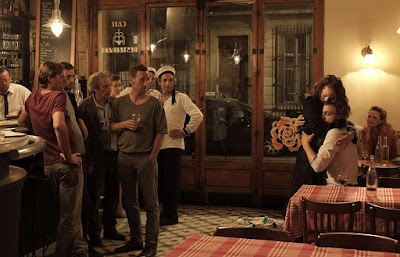 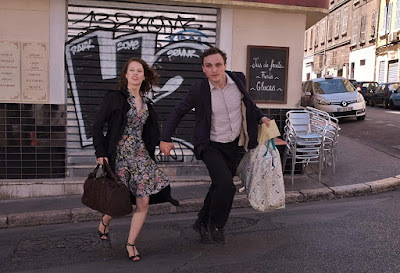 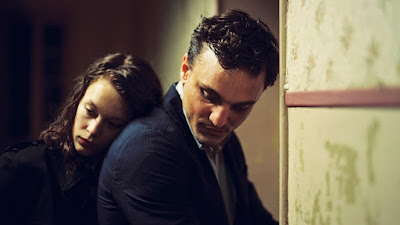 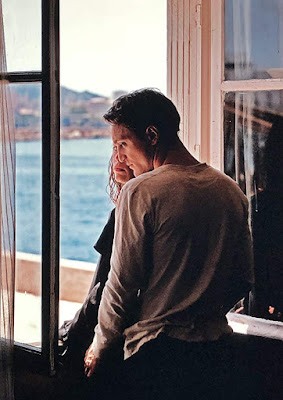 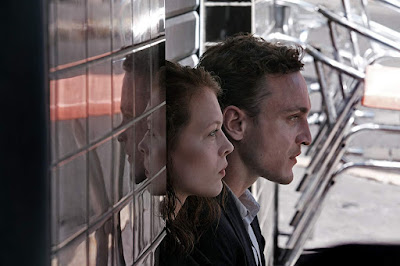 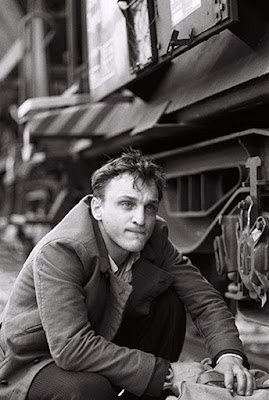 Actor Franz Rogowski on the set 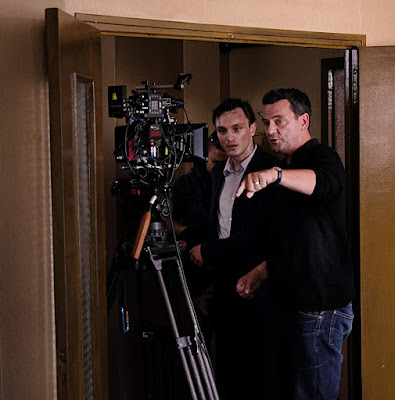 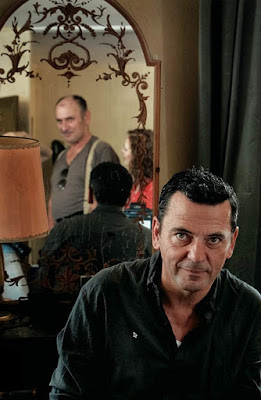 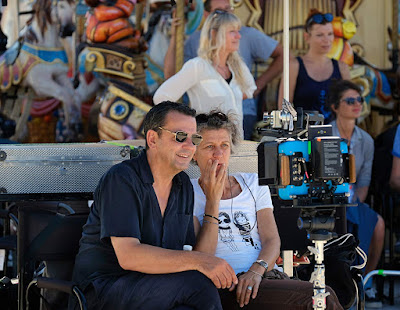 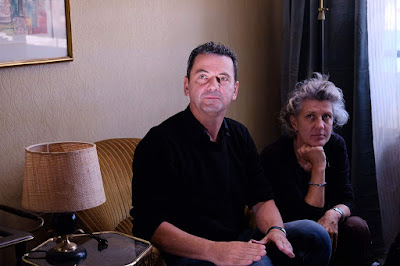 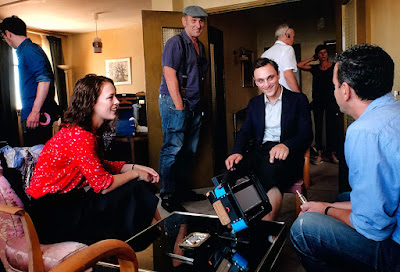 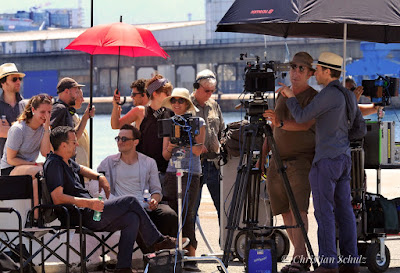 Everything was on the move, everything was temporary, but we didn’t know whether this state would last until tomorrow, a few weeks, years or even our entire lives.
―Ann Seghers, Transit Visa, 1944

A sign of the times, as few films describe the extent of the rising tide of fascism better than this one, a portrait of a future oblivion expressed as a 70’s style paranoid conspiracy thriller that borders on science fiction, where particularly impressive is establishing a tense, disheartening atmosphere that never reveals itself, set in a timeless period that resembles the present or an apocalyptic future, though the disorienting noirish mood resembles Pen-ek Ratanaruang’s eerie ghost ship from INVISIBLE WAVES (2006), where characters mysteriously find themselves in a strangely oppressive place that feels like another dimension associated with death and bleak atrocities, yet can’t ever manage to find their way out, seemingly stuck in a purgatory of waiting hopelessly in a state of constant fear and dread, hoping their opportunity to seize the moment to get out will come soon.  Surrounded by everpresent police raids rounding up what seems like an endless transitory population of refugees with no papers or proper documentation, an obsession with law and order prevails, with a compliant public feebly becoming willing accomplices going along with the status quo, not wanting to be blamed, pointing out anyone suspicious to the police, creating an invisible underclass always attempting to avoid the network of police raids.  Adapted from the Anna Seghers’ novel Transit Visa from 1944, the novel describes a wave of fascism enveloping France during the war, but Petzold expands to a surreal time period, commenting both on the past and the present with a futuristic depiction of refugees in crisis.  But this is no ordinary film, told without any backdrop or explanation, narrated by someone mostly unseen who’s not even a major player, seen only on the periphery in a shot or two, yet he’s a silent observer who witnesses the state of building hysteria that prevails, commenting on the dismally sad and desperate times.  In much the same way, the world is seen through the eyes of Georg (Franz Rogowski), the central figure, an outsider who is himself a refugee that moves around like he’s from the Resistance, viewed as part of an organized movement, at least at the outset, continually evading the ever-expanding police presence, where everyone is a suspect presumed guilty.  Escaping on a train from Paris to Marseilles, it’s clear that we are in a transit zone, both geographical and emotional, stuck in a state of limbo, with quiet conversations in tiny rooms, in small hotels, or the bars and cafés of the harbor, where people are forced to hide behind closed doors and lead lives undetected by the outside world.  But something happens that offers Georg an opportunity, as a moment presents itself to him, allowing him to exchange identities, like Antonioni’s THE PASSENGER (1975) or Lynne Ramsay’s MORVERN CALLAR (2002), though it plays out entirely differently, more like an Angelopoulos film, where characters from the past walk seamlessly into the future and meet with people from today, all concerned about a grim future that appears to be deteriorating before their eyes, where this is easily one of the more hauntingly original films seen all year, filled with novel surprises, eccentric characters, and lives with meaning, becoming especially intense at the very moment people are about to lose their freedom.

A beautiful follow-up to 2015 Top Ten List # 3 Phoenix, arguably Petzold’s best film, a film rejected by both Cannes and Venice, while this film left Cannes emptyhanded as well, though it’s surprisingly alert to the transgressions of the modern world, especially in Europe, where the director is fascinated by the aura of German filmmakers like Fritz Lang and Max Ophüls who fled to America to escape Hitler, claiming “The light from Germany went to the U.S.A. in the 1930’s…We have to bring the light and style back to Germany, especially the noir which was created by Austrian and German refugees.”  And in this film, refugees are hidden throughout France, filling every nook and cranny, seen scurrying around like rats trying to escape as a fascist police network is inevitably closing in.  While the murky atmosphere creeps up on viewers, what we learn from the outset is that Georg meets a clandestine friend at a bar in Paris, told that the city is sealed off, discussing plans of escape in hushed tones while blaring police sirens constantly speed past the window, creating an ominous mood.  They talk of a foreign occupation, forged documents, arrests and deportations, while teams of police swarm through the streets of Paris, recalling World War II, yet this is clearly the present, absent any use of cellphones.  What Petzold has designed is a parallel universe run by a fascist state of mass surveillance gone berserk, returning to the Nazi era style of persecution.  Georg is offered a safe passage out of Paris if he’ll deliver a pair of secret letters to an important writer named Weidel who is hiding in a certain hotel, one from the Mexican consulate offering safe passage and one from his wife who is desperate to see him.  But by the time he gets there Weidel has committed suicide, with Georg taking possession of his final manuscript and his German passport, fleeing to Marseille on a slow train of four days, looking after a deeply wounded partisan who is in rough shape and doesn’t make it, leaving Georg to fend for himself.  Petzold has done a masterful job creating an underground network of fear while at the same time an ominous web of authoritarianism is steadily taking over daily life targeting the innocent, while the rich with means of escape have already done so, leaving only a desperate group of survivors intent on finding a means of escape.  The cinematography by Hans Fromm is particularly brilliant on the train sequence, where the world outside is moving in a blur, while concealed inside is a battle of life or death, where the consequences couldn’t be more serious.  Marseilles is a sunny port city, with boats slowly moving in and out of the harbor, yet it’s filled with nationless and abandoned inhabitants intent on finding a way out, gathered in all the small hotels which are filled to capacity, charging exorbitant rates, where the bitter irony is that only those who can prove they can leave are allowed to stay in the dilapidated seaside hotels, subject to constant police raids who are seen dragging screaming people out, while onlookers can only stare in utter shock and humiliation.  In this seedy atmosphere of conspiracy and incoherence, Georg must find his way.

Exhausted and broke, not having eaten in days, his plan is to visit the Mexican consulate in hopes the writer’s documents will fetch a small reward, while a desperate woman keeps walking up to him thinking he’s someone else, terribly disappointed to discover he’s not who she hopes he would be.  In wartime, this kind of mistaken identity probably happens all the time, becoming easily forgotten, lost in the shift to survival mode, where everyone’s priorities turn to protecting themselves.  While waiting in the consulate, what’s somewhat mystifying is the overwhelming need for each of them to tell their stories, as if they haven’t spoken to anyone for days or weeks on end, becoming desperate versions of themselves that never existed before, having lost all signs of stability and rationality, where in this Kafkaesque universe everyone is losing their minds.  To Georg’s surprise, he is quickly identified by the Consulate as the writer himself, where a hefty check awaits him along with safe passage to Mexico that leaves in a few weeks, with a message that his wife has been looking for him.  He concocts a story of marital woe, suggesting they split up, where the existential question asks if the more harmed party is the one who left, or the one being left.  Without spilling any of the beans, the sequence of characters Georg runs into is a myriad of invention, each one more interesting than the last, adding depth and complexity to an already lurid atmosphere, as he’s mysteriously intrigued by their lives, discovering he actually cares, which alters the whole tone of the film, as these invisible people routinely being ignored actually start to matter to him.  In some cases the results are positively heartbreaking, especially the relationship that develops between Georg and a young boy, Driss (Lilien Batman), the surviving son of the man who died on the train with him, where he quickly becomes a friend and father figure, playing soccer with him, also fixing a broken radio, even singing a melancholic lullaby that his mother used to sing, but that all turns upside down when Driss discovers he has plans to leave, feeling hurt and betrayed, as he’s being totally abandoned once again.  When Driss falls ill, Georg frantically searches for a doctor, discovering a German pediatrician named Richard (Godehard Giese), who is romantically involved with Weidel’s wife, Marie (Paula Beer), the one who keeps running into him, beautiful but particularly vulnerable, where his heart goes out to her, but he can’t bear to tell her what actually happened to her husband.  The jarring narration heard throughout has a literary feel, as if otherworldly, like an intrusion from another dimension, all-knowing and all-seeing, offering a different kind of wisdom that prevails throughout the picture.  Beautifully fleshing out minor characters, each in their own way contributes to the whole, with Petzold creating a masterclass of confusion and forged identities, all merging into one, as it’s a picture of the world turned on its end, suddenly off-kilter and out of whack, where the things that matter in life are easily discarded like damaged goods, steamrolled into nonexistence, where only those with precious insight into the living stand a chance of surviving.  Perhaps his most visionary work to date, it’s an extraordinary expression of love and lost hope, where Petzold’s choice of music playing over the end credits is a stroke of genius, revealing the power and significance of all that is getting away from us, short-sighted and preoccupied by our daily lives and routines, caught up in a whirlwind of terrible choices that may destroy us all.
Posted by Robert Kennedy at 12:30 AM