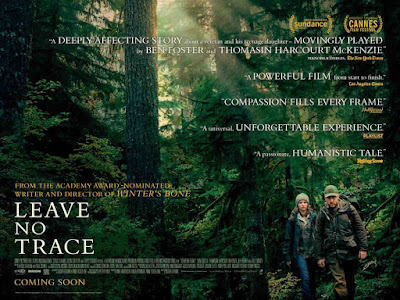 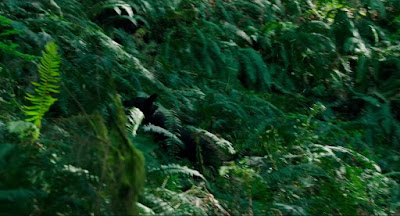 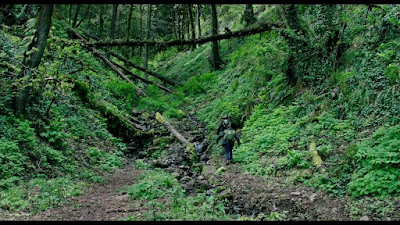 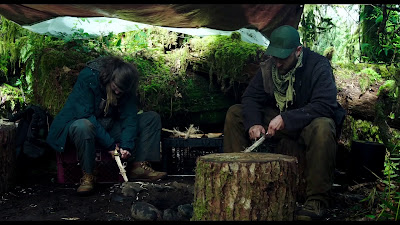 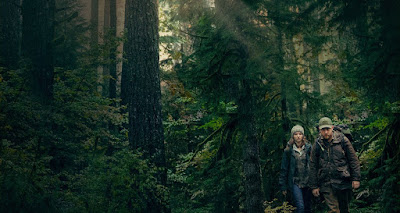 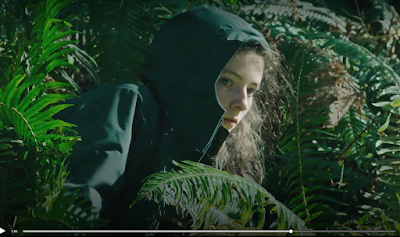 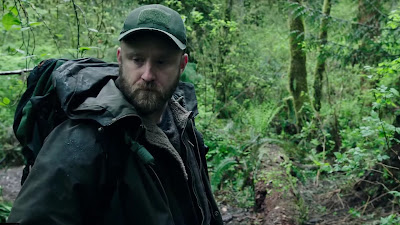 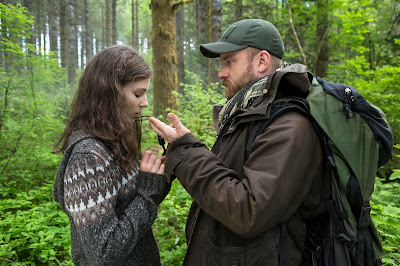 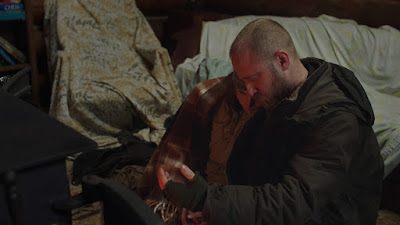 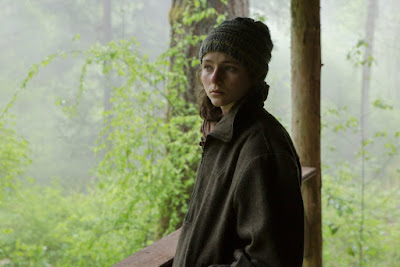 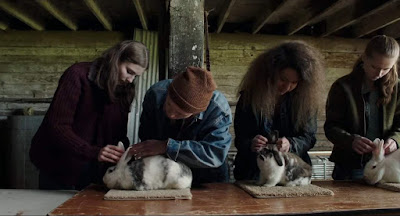 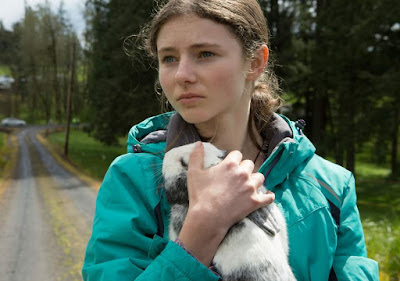 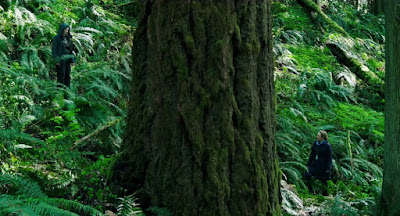 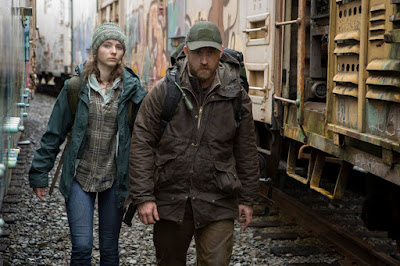 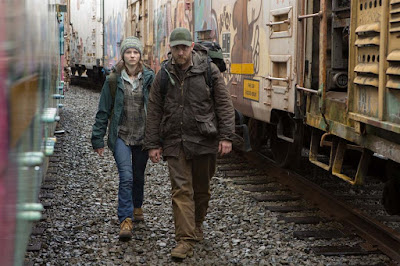 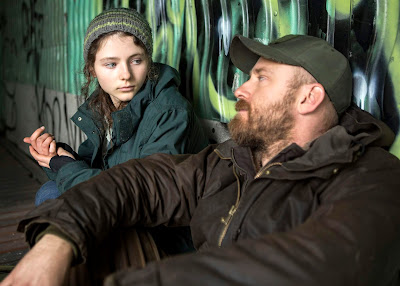 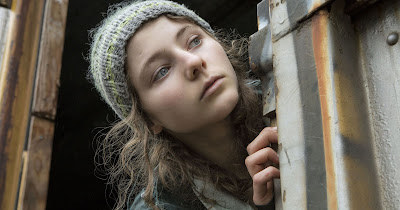 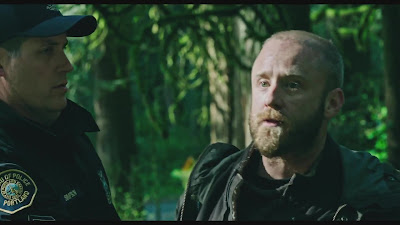 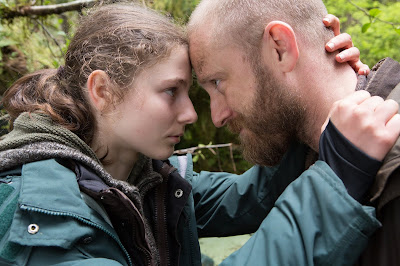 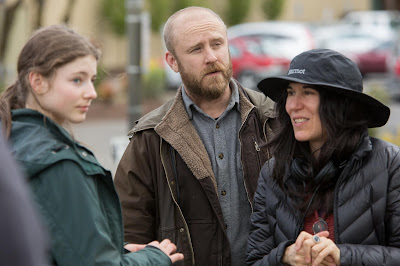 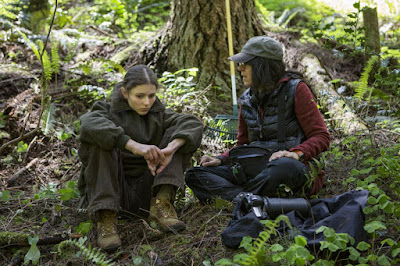 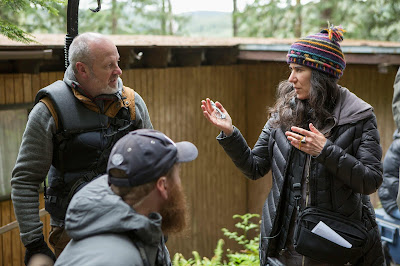 Director Debra Granik on the set with  cameraman Michael McDonough

This beautiful, strange novel takes us into the foreign country where those called homeless are at home, the city is wilderness, and the greater wilderness lies beyond.
―Ursula K. Le Guin on Peter Rock’s novel My Abandonment, 2009

While Debra Granik made a documentary that few saw called STRAY DOGS (2014) about a grizzled war vet, it has been 8-years since her brilliant first feature, 2010 Top Ten Films of the Year: #3 Winter's Bone, an adaption from a novel by Ozark resident Daniel Woodrell that provided a riveting backwoods rural view of America, described as:

An outstanding film, certainly one of the films of the year, a performance driven work that digs deeper into the protectivist, individualistic spirit of America than anything else seen in recent memory, certainly matching the mood of the nation at the moment which may feel the government is overextending into the lives of private citizens.  Not sure there’s another film out there where visiting your family represents such a life-threatening risk, as the backwoods rural view of government and authority is so low here that they’ll do anything to keep it out of their life, even risk death in various confrontations with the police, as people in this neck of the woods believe that individual freedom comes with the right to exclude any and all persons from their property, including their own kin.  Of course, if they’re manufacturing crank in crystal meth labs, that might have something to do with it.

More representative of John Hillcoat’s apocalyptic The Road (2009) written by Cormac McCarthy, a father and son relationship that reverberates with quiet poetry, Granik explores a father and daughter team of survivalists living off the grid in the Oregon national parks, braving the elements, living off the land, and maintaining their composure while keeping their wits about them, basically avoiding all contact with society except for rare trips into the city of Portland for basic necessities.  Moving from camp to camp, they remain undetected, hiding their stored goods under camouflage of the forest, barely detectible to anyone passing by, regularly practicing hiding techniques, using the deep forest overgrowth to their advantage.  The park system is so vast that rangers can’t possibly cover all the wildness of the unexplored territory, allowing some to live near invisible lives.  Much like the beginning of Captain Fantastic (2016), basically a 60’s counterculture film set in contemporary times, where a family headed by a the irrepressible force of Viggo Mortensen attempts to survive in the wilderness of the Pacific Northwest, Will (Ben Foster) has retreated into the deep woods with his teenaged daughter Tom (Thomasin Harcourt McKenzie) in a shelter they created, growing their own vegetable garden, while taking baths and storing perishables in a nearby creek, where the difference is in the character of the men, as Will says little, only what’s necessary, while Tom is all ears, home-schooled by her father using old encyclopedias, yet acutely tuned into the same wavelength, avoiding contact with others, believing they are not meant for society.  Because of the degree of their avoidance, and just how successful they’ve been for so long, at first it’s hard to get a read on where they’re coming from.  Seemingly avoiding ideology altogether, this is not some utopian gesture or political statement other than an extreme refusal to conform, remaining very wary of authority of any kind, preferring to make their own rules to live by.  When they are finally discovered by rangers, they are scrutinized like never before, father and daughter separated, each evaluated by social services for motives and mental competency, which is a Kafkaesque portrait of near surreal incompatibility, humorous in just how far apart society remains in actually getting through to or understanding people like this, but it’s clear they have no intent to harm anyone and do not pose a threat to anyone, including themselves, yet they do have to cooperate with agency rules and process.  One of the multitude of questions asked (over 400, and by the eerily uninviting voice of a computer, with only 3 seconds to respond) is whether Will is a team player?  His answer “I used to be” says it all, as he recalls being part of the whole before permanently disassociating altogether.

This reintegration process reveals plenty, as Tom is not your typical wayward and discarded kid expected to survive years in the foster system, as she has a loving and devoted father, who may himself be psychologically scarred from his military past, still waking in the middle of the night to nightmares, later learning the sounds of helicopters causes him undue stress, obviously suffering from the effects of post-traumatic stress, which he deals with in his own creative way, finding a therapeutic silence in the forest, where the only money he makes is selling ineffectual painkilling meds to fellow vets living in tent villages inside the park.  The severity of Will’s condition is only revealed in increments, becoming clearer over time, not really explored by the social service intervention, yet becoming the central core of the film, which is basically a tribute to scarred and psychologically damaged veterans, where the suicide rate is an astonishing 20 per day, accounting for 18% of the suicide deaths in the country.  Reunited and both placed in an unoccupied cabin on a tree farm, a pre-fab structure on the fringe where the owner expects Will to work for his keep, this is at best a compromise solution, remaining outside the impossible realms of being situated in a city, actually bordering the forest, but clearly part of the design is to commercially exploit the natural resources.  Because of the conundrum of Will’s inscrutability, refusing to be open to others, precious little is revealed through his eyes, especially as the film progresses, which is no minor oversight, as the condition persists, becoming the key to the film, which turns, becoming an ever-widening worldview seen through the eyes of Tom, meeting new people, having her own experiences, actually having a home, for a change, which she takes a liking to, not surprisingly, but the ordeal is too much for Will, who must abandon this arrangement, the sooner the better, despite the obvious positive impact it’s having on Tom.  This rush back into the heart of the forest feels more like a military operation, moving deep into the forest under cover of night, moving as quickly as possible, which is a test of physical stamina and extreme duress, like diving off a cliff into pure oblivion, which perhaps is the point.  Uprooted from the “real” world, unable to fathom the depths of her connections there, which are so vividly new, they press on into an unexplored wilderness, surviving a frozen night protected only by a layer of evergreens strewn upon them, it seems like lines of demarcation are developing between them, as if they’re on separate missions.  Finding an unoccupied cabin in the woods the next day, they make the best of it, warming up to a fire, finding a few cans of soup, as Tom gets settled while Will explores the terrain.

Granik just offers a brief glimpse into Will’s psyche, as Tom goes through his possessions during his absence, finding a newspaper article about psychologically damaged veterans finding refuge in the woods.  The moment is only a second or two, but it may as well be a lifetime, suddenly etched into the deep recesses of our consciousness.  While Tom displays a domesticated flair, lighting dozens of candles for her father’s return in the dark, literally providing a beacon from the storm, but sadly he doesn’t return, found the next day lying unconscious at the bottom of a dry river bed, but still breathing.  Tom runs for help in the vacuous emptiness of the woods, incredibly flagging down a pair of ATV riders racing through the outback, who offer emergency help.  As one of them is an army medic, Will is extremely fortunate to survive, put up in a vacant trailer in a trailer park in the woods, where Tom is befriended by a concerned older woman (Dale Dickey, unforgettable as a ferocious force of nature in Granik’s earlier film) who leaves bags of food tied to trees in the woods for strangers she hasn’t seen in years and honors their privacy, with Tom expressing an urgency not to go to a hospital or be around anyone asking questions, as if they’re on the lam from the law.  Despite anyone’s initial suspicions, Tom puts all that to rest, as she’s outgoing and friendly, curious about this little forest community and how it works, becoming the darling of this set of grizzled outsiders, who have a distinct culture all of their own, finding little need for contact with anyone in town.  It’s like a saving grace, as Will is nursed back to help, relearning how to walk again from a broken ankle, lucky that it wasn’t worse, while Tom has literally blossomed before his eyes, finding friends while he remains distant and aloof, never really able to accept “other people.”  While he’s there in presence, just not in spirit, as his mind is elsewhere, needing to head back off into the woods, retreating from any contact with people.  When he’s ready to disappear again and make their escape, Tom goes reluctantly, but only to a point, finally making her stand, valuing her connection with others, even if they’re not her real family.  It’s a hushed but enthralling and heartbreaking moment, filled with a rush of emotion that’s hard-earned, where Granik allows the audience in on just how significant a moment like this is by accumulating such meticulous detail in the backdrop of their lives leading up to it, eventually leading them in different directions.  The moment feels especially rare because of how unlike anyone else Tom has been up until now, but she’s fully prepared to walk through that door into a brand new world.  Adapted from a 2009 novel, My Abandonment by Peter Rock, it’s based on true stories that appeared in newspaper articles from The Oregonian in 2004, including The Portland Oregonian articles that inspired the story [PDF] (where people contributed thousands of dollars for an education fund, but the actual couple in the story just disappeared), and a follow-up overview by Ann Robinson in 2009 that includes excerpts from the book, Northwest Writers at Work: Peter Rock | OregonLive.com.
Posted by Robert Kennedy at 12:25 AM