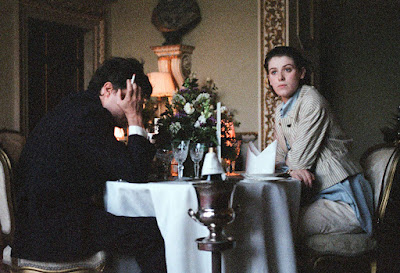 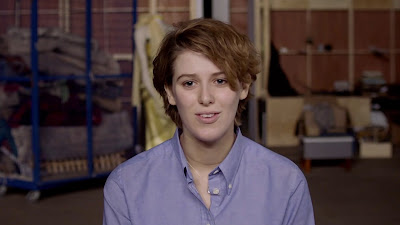 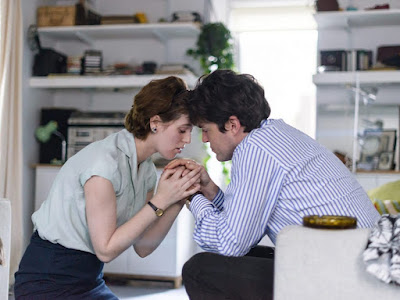 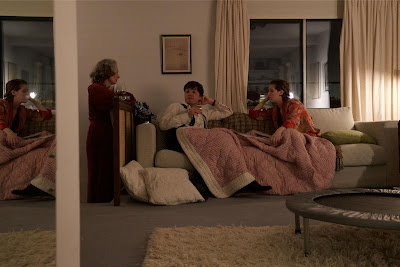 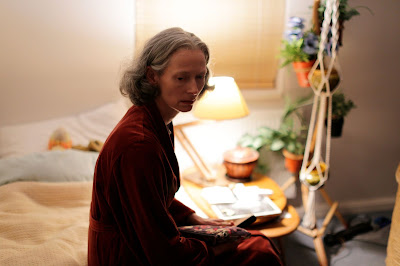 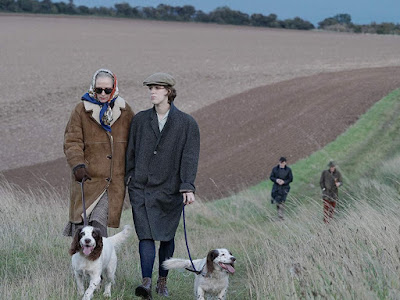 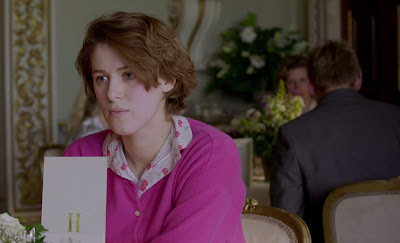 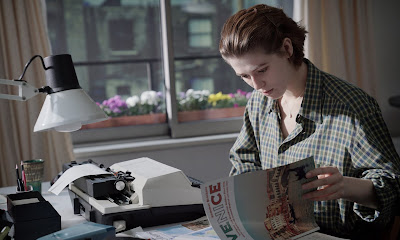 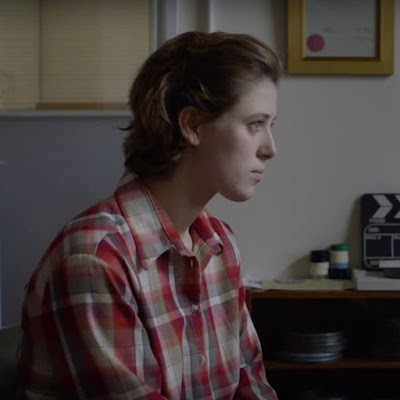 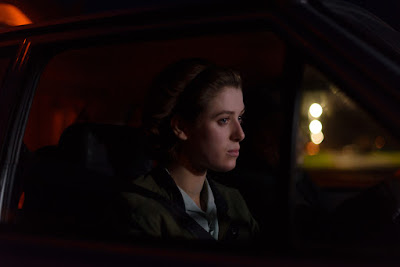 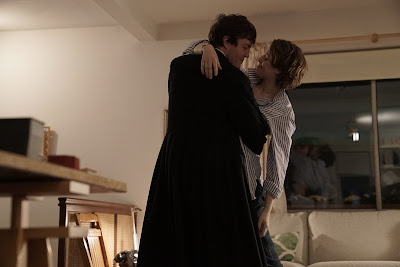 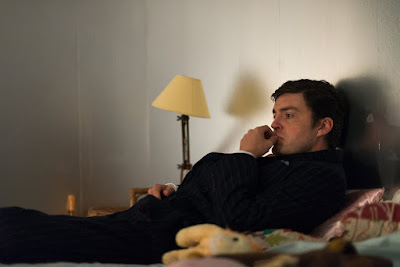 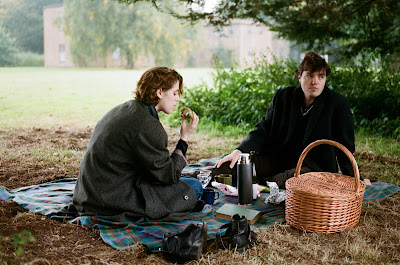 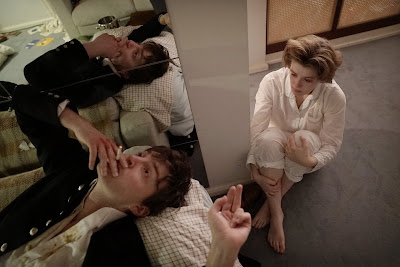 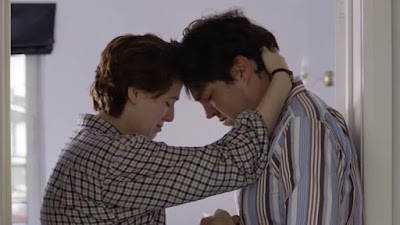 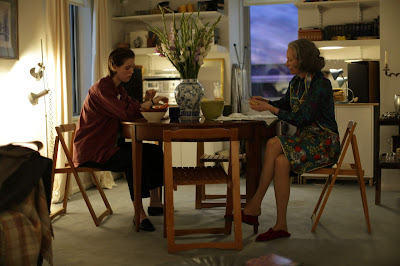 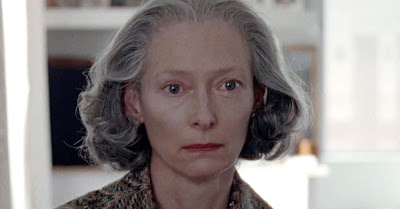 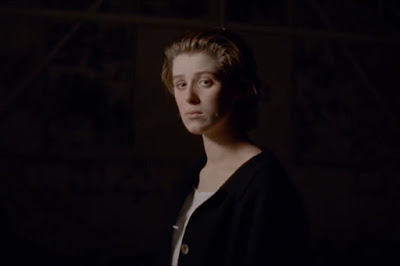 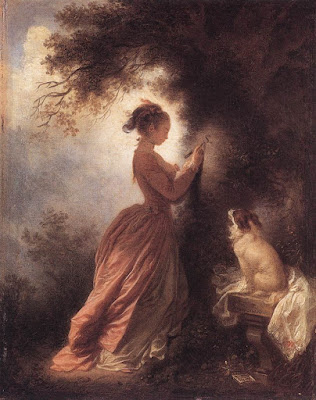 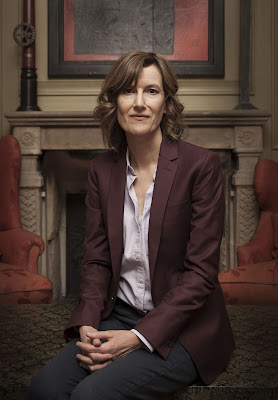 When I am dead, my dearest,
Sing no sad songs for me;
Plant thou no roses at my head,
Nor shady cypress tree:
Be the green grass above me
With showers and dewdrops wet:
And if thou wilt, remember,
And if thou wilt, forget.

―Song, by Christina Rossetti from Goblin Market and Other Poems, 1862, though written in 1848 as a teenager

As dismal and depressing as film gets, which is a courageous statement to make as an artist, but this one makes you want to jump off a bridge and end it all, where it’s relentlessly downbeat until the final shot, actually more of a roller coaster to hell.  If you stick through the end credits, it reveals this is the first of two parts, so there’s more of this to sit through.  That said, the film is superbly acted and directed, and while autobiographical of the writer/director, based on her real-life experiences while attending film school in London in the early 1980’s, it creates a captivating visual and emotional landscape all its own, not feeling like other films, basically discovering new ground while exploring the horrid effects of a toxic relationship.  The director gets inside the wounded soul of a young woman who is enchanted by first love, even after she realizes the devastating effects, with viewers cringing with horror at her choice not to pull away, remaining a true partner, steadfast and loyal, even while her partner wastes away the best years of his life, poisoning what’s left of their love, yet the director is somehow able to remain detached from it all and allow cinematographer David Raedecker to simply observe with an artistic eye as a woman from the upper crust of British society refuses to let go of what she believes is the best thing that ever happened to her.  Charming and naïve, she may be, yet she’s no fool, initially flabbergasted to discover purely by accident that her partner is a “habitual drug user,” ignoring the marks on his arm, unable to even conceive such a doomed path, as her whole life is ahead of her, yet they engage in a kind of sordid Sid and Nancy affair for the privileged upper class, clearly able to separate reality and illusion, but the reality that exists for her is just an illusion for her damaged partner.  The two players are remarkable, Honor Swinton Byrne (daughter of Tilda Swinton, who plays her mother in the film as well) in her breakout role as Julie, a shy but ambitious film student from the upper crust, and Tom Burke as Anthony, at least a decade older, who supposedly works in the Foreign Office, appearing suave and sophisticated, highly educated, showing a cultural appreciation, yet behind the spit and polish is smug arrogance and pathetic manipulation, where he pretends to be understanding but he’s a user, growing darker and more desperate by the day and by the hour, eventually succumbing to his disease, dying from an overdose, which is how the film ends, just as she’s finding her voice as a student filmmaker, where the final sequence of shots is utterly enthralling, staring straight at the camera, challenging viewers to put themselves in her place, asking how would they fare?

Winner of the World Cinema Grand Jury Prize at Sundance, the director’s working style is of interest, as everyone was given a script except the two leading players who were instead each given artifacts from the 80’s, diaries, photographs, old letters, even the first Super 8 footage she ever shot, and then told to improvise.  Shot in chronological order, in this way the lead actors discover their circumstances for the first time before the camera, adding a more naturalistic style which the director was looking for in what is essentially a reconstruction of her own personal memories.  Hogg and Tilda Swinton have known each other since the age of ten, so she is familiar with the circumstances of the relationship, though curiously in the film Julie hides the darker side of her relationship from her mother who nonetheless stands by her daughter.  One of the more remarkable scenes is a walk together in the vast rural countryside where Swinton’s own dogs are allowed to run free, scampering ahead of the slower human walkers, relishing the unbridled freedom they’ve been given.  The stark contrast between this open, expansive image and the claustrophobic, closed-in interior world of the couple couldn’t be more pronounced, as one is sprinting ahead with no encumbrances while the other appears to be sleepwalking.  The title actually comes from an 18th century painting by Jean-Honoré Fragonard (The Souvenir by Jean-Honoré Fragonard – my daily art display), a depiction of young love, romanticized in a dreamlike reverie, showing a girl carving initials into a tree while a letter from her lover lies on the ground, where nothing else matters, as this is all that exists in the world at that particular moment.  As if spawned in innocence, this film begins much the same way, meeting an older gentleman at a party, more distinguished than the riff-raff she meets at film school, Julie is seen pitching her idea for a film before the older faculty members who are struck by the idea of making a film about something that is so foreign to her, insisting upon a story with a working class background, something she clearly knows absolutely nothing about, showing black and white photos she has taken of the economic wasteland and neighborhood ruin, revealing the harsh deprivation of the times, claiming she doesn’t wish to remain in a “bubble” forever pidgeonholed to stereotypes.  While this may leave them scratching their heads, she’s quickly given more practical advice, “The most important thing is that you make a connection between your experience and the thing you’re trying to film.”  While hardly a rebel in any sense, she resists all patronizing judgment and stakes out her own path, though utterly lacking in confidence, completely self-conscious about her life of privilege, wondering how she’ll fit in, avoiding the other students for the most part, caught up in a torrid affair that exhausts her time and depletes her energy.

Other than the jarring musical selections, there are few indicators that we’re living in the 80’s, yet Julie’s sympathetic view of ordinary people comes from caring for the forgotten, her personal reaction to the Thatcher era, with IRA car bombs making the headlines, blasting to smithereens any idea that peace in Northern Ireland is near, suggesting troubled times exist, which includes a bomb that rocks the neighborhood, unsettling the normal calm, where she has the luxury of safety and protection, with key moments happening offscreen, living an isolated life with a troubled man that has quickly moved in with her.  Told with a dreamy sensibility, essential storylines are omitted, like Julie confronting Anthony about his addiction, and large chunks of time pass without notice, yet the central focus of Julie’s life remains unscathed, somehow able to balance her boyfriend’s deterioration and instability with normalcy, retaining a sense of purpose through school, even as she scraps her plans of a working class drama and changes course in midstream, trying something different, though visibly awkward and clumsy on the set, unable to assert herself or express authority, yet films are made in just such chaotic and disorganized circumstances, where it seems a miracle that something lucid and coherent could come from that confusion.  Through a series of lies, stolen money, and a fake burglary, there remains an air of refinement, as they continue to visit such posh restaurants, including a visit to Venice that begins in tears of shame and horror, yet through sheer persistence and weeks of planning, she manages to wear a long flowing gown and visit the opera in high style, with operatic excerpts interspersed throughout the film recounting the underlying tragic elements of it all.  Anthony is a despicable soul that sucks her blood like a vampire while poisoning his own, yet she patiently stands by him, leaving viewers aghast at her willingness to submit to his loathsome behavior, enduring detestable insults and abuse with passive acceptance, continually begging forgiveness by kissing his hand, a gesture made infamous in THE GODFATHER (1972).  What this does is expose her vulnerability, making that the centerpiece of the film, with all the decorative aristocratic scenery feeding into the vague inexpressiveness of her inarticulate character.  Basically a coming-of-age story, it’s only behind the scenes that she gains confidence and grows, always looking rushed and insecure making phone calls home on a wall phone in between shots on the set, but once that door closes and shooting begins, another personality is emerging, which only comes to light after the death of Anthony, shooting a scene with an actress openly negotiating the terms of death, reading the lines of the familiar Christina Rossetti poem (a reference to Tilda Swinton appearing in her unfinished student film entitled The Rehearsal), as somewhere, behind a slow tracking shot of people assembled on the set, behind them all is Julie, suddenly staring straight at us, now emboldened, taking on a new attitude, with the feeling that the door to her future has somehow swung wide open.
Posted by Robert Kennedy at 12:03 AM