In the Aisles (In den Gängen) 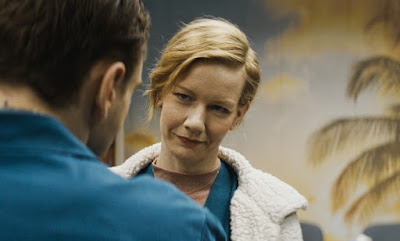 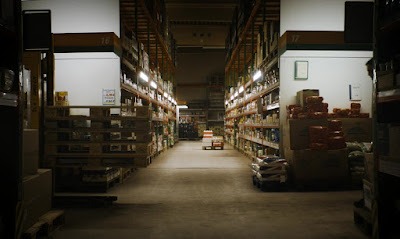 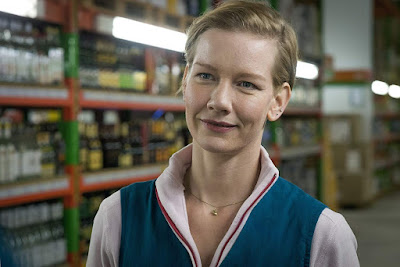 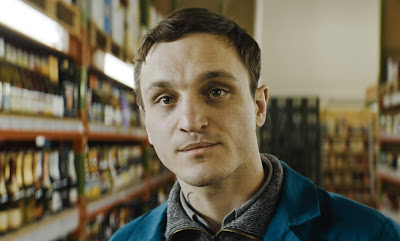 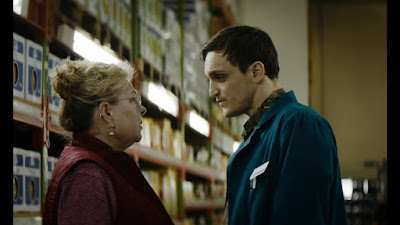 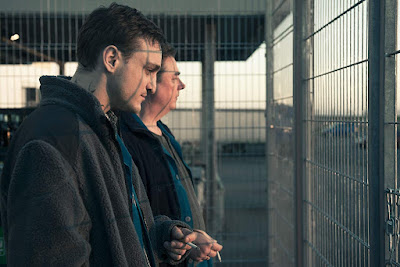 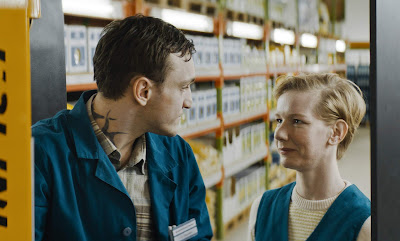 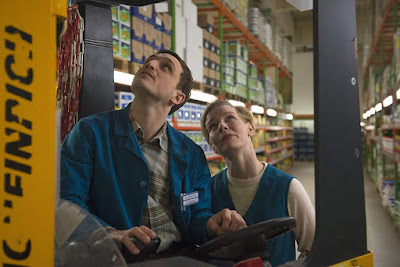 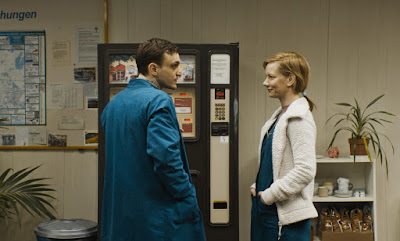 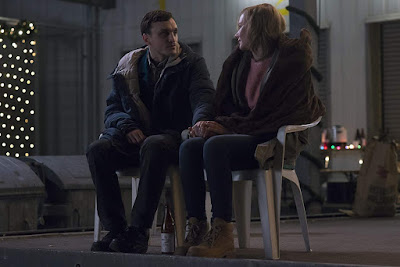 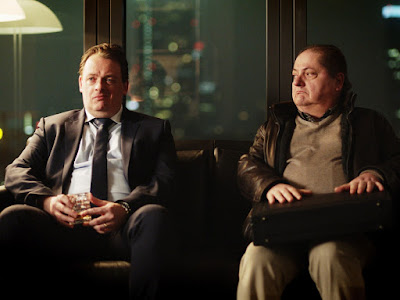 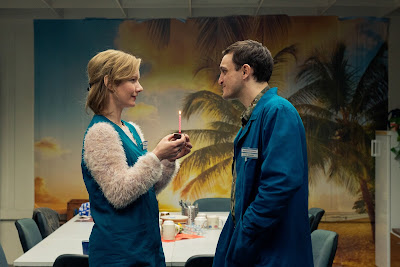 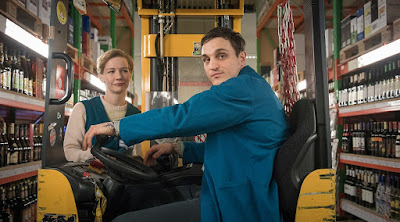 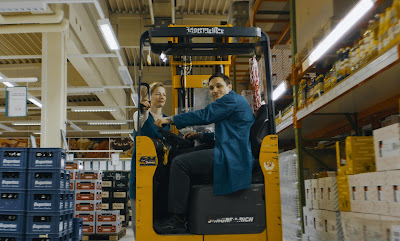 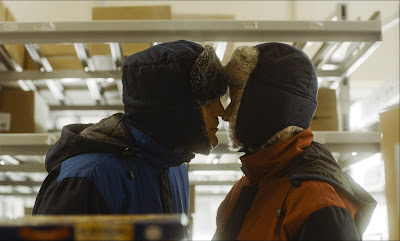 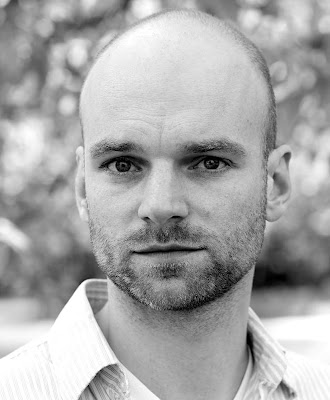 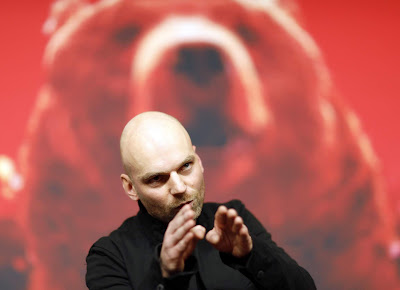 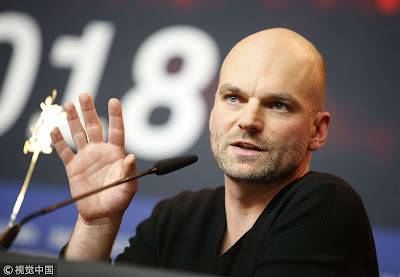 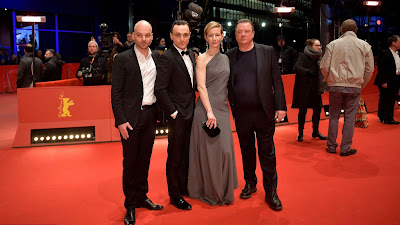 Just bear this in mind, a true friend is hard to find
―Son House

A beguiling and contemplative piece, emotionally underplayed, quite devastating really, and brilliantly acted, set in the world of the ordinary, this quirky and somewhat offbeat character study is about a blue-collar romance developing at a massive supermarket warehouse just off the autobahn with endless rows of aisles where goods are stocked forty feet high, all but ignoring the shopping public, instead honing in on the work crew, using droll comedy interspersed with social realism, revealing something about the human soul as it is challenged by menial work in what is essentially dehumanized, artificially constructed work space.  Not exactly a buddy movie, it does accentuate the friendships established following the isolated lives of workers, three in particular, where it does a good job establishing interior complexities in such a routine setting, using choice music and tender mood shifts to tell the story, featuring the magisterial quality of Bach, Air - Johann Sebastian Bach YouTube (5:39), the soulful, utterly unpretentious nature of the Delta Blues, SON HOUSE - Grinnin' In Your Face – YouTube (2:08), the new wave airiness of modern spaces, Timber Timbre - Trouble comes knocking – YouTube (5:26), and the degradations and perversities of our worst impulses, Son Lux "Easy" Official Video - YouTube (4:32).  And while it’s contemporary, it harkens back to the days of German reunification when East and West combined, as some have still not really made the transition, despite the passage of nearly 30 years.  That in itself is remarkable, happening under the radar, outside the headlines, yet in the rush towards modernity many key elements of society may have been left behind (20% of voters in the former GDR voted for the far-right Alternative for Germany (AfD) party in the most recent election, twice the amount of the rest of Germany).  This film looks forward even as it has an eye on the past, with the middle class rocked by paralysis, stuck in limbo, where the tragedy is that things will not likely get any better, as this is the economic dream being realized.  This is the new normal.  It stars Franz Rogowski as the heavily tattooed yet socially awkward Christian from 2018 Top Ten List #3 Transit and Sandra Hüller as the ever elusive Marion from 2017 Top Ten List #2 Toni Erdmann, who comprise the reticent couple, as well as Peter Kurth as the chain-smoking Bruno, a longtime character actor from German film and television, evoking the stylistic quality of a world weary Aki Kaurismäki character.  Clearly envisioned as a working class drama, it opens, humorously tongue-in-cheek, with the rhapsodic music of Johann Strauss’ The Blue Danube Waltz, The Blue Danube, Op. 314 YouTube (10:10), used so memorably in Kubrick’s 2001: A Space Odyssey (1968), where it may as well be an alien world, offering an elegant spaciousness to the interior grandeur of the store as Peter Matjasko’s roving camera pans through the darkened aisles, all leading up to the title sequence.  When the lights come on, the world comes alive.

Adapted from a short story by Clemens Meyer, whose novel about growing up in Eastern Germany was filmed earlier by Andreas Dresen in As We Were Dreaming (Als wir träumten) (2015), Christian is a new hire, seen receiving his name tag and overcoat (pulled over his noticeable tattoos), assigned to Beverages under the tutelage of Bruno, who knows the ropes, immediately taking a 15-minute smoke break, In the Aisles / In den Gängen Clip 1 YouTube (52 seconds), showing him the ins and outs of the facility, yet what’s most recognizable is how forklifts whizz up and down the aisles in a carefully choreographed ballet of speed and dexterity, where it’s a wonder they never collide at intersections, as no one yields the right of way.  Bruno is like the big brother to all the workers, as he’s been there since the beginning, having worked there earlier when it was a trucking business in East Germany, routinely making deliveries from Leipzig to Dresden and all parts East.  Now he does as he pleases, violating all the known rules, but gets away with it, as he exudes a certain gruff charm, where he’s prickly on the outside but a pussycat on the inside.  He takes an immediate liking to Christian as he doesn’t say much, allowing Bruno to dominate all conversations, which is the way he likes it.  After successfully displaying his ability to stock shelves, Christian advances to a forklift operator, but lacks the initial confidence, accidentally banging into things, displaying an awkwardness that’s hard not to miss, sent to a forklift class where they watch a video that was actually a parody of work safety films from the 80’s, turning into a grotesque display of bloody mutilation and horror that obviously delights the instructor.  Christian shows little improvement afterwards, but does have his eye on a bakery goods worker he spots between the shelves, meeting up with “Sweets” Marion by the vending-machine coffee dispensary, featuring a wall-sized poster of palm trees on an idyllic beach, like an oasis from the mundane dreariness of the job, where she initiates all the small talk and flirtatious remarks, but he’s a smitten kitten, not lost by Bruno, who misses nothing, or the rest of the staff, as there are really no kept secrets here, as store clerks work out in the open, developing small-town habits where everyone knows everyone else.  Bruno, of course, teases him relentlessly, but his main concern seems to be treating her well, suggesting Marion has had a checkered history in an abusive relationship, but he refuses to go into details, leaving it all a mystery, though one of the female staff is quick to remind him that she’s married.  Nonetheless, she takes an interest in him, affectionately calling him a newbie, where they obviously click.

Tinged with melancholy and quiet moments, with Christian riding home at night on an empty bus, living alone in a bleak high-rise, workers are viewed as the picture of displacement, with the middle class mirroring the world of refugees, not being where you want to be.  The interior world of the supermarket is fully realized, from the florescent lights turning on and off to the tiled floors and the seemingly endless merchandise that is continuously removed from the upper shelves and restacked on the lower shelves, a routine that is constantly repeated with forklifts taking on the roles of mechanized characters, each performing essential duties, an extension of the driver in charge, moving fluidly through the store’s inventory.  An office Christmas party brings the couple closer together, sitting outdoors and snuggling in the cold, but she disappears afterwards, nowhere to be seen, apparently taking a sick leave.  Through his own existential narration, we get inside Christian’s mindset, which feels touchingly incomplete without her, yet we also get a reminder of his criminal past when a couple of his drunken buddies show up, ne’er-do-wells with a penchant for senseless fighting and reckless destruction, bullies really, displaying a gangland mentality of fierce individuality, abiding by no laws whatsoever.  As if unlocking a key to his past, his curiosity gets the best of him, spying on Marion’s home, invading her privacy, even with the best of intentions, but it’s a creepy scene of stalking behavior, one that he pretends never happened.  Her absence sends him into a dizzying spiral of gloom, where work is just work, with no reward whatsoever, leaving him ever more isolated and alone, showing how easy it is for workers to fall into the doldrums of despair when work is devastatingly routine and monotonous.  Bruno brings him home one night for a round of drinks, revealing his own solitary confinement, as the place is a dump, yet this is so typical of the behavior of men, drowning their sorrows in drink, completely unable to express how they feel, locked into a mindset of continual disenchantment.  What’s clear is that work is a veneer covering up the interior emotional wastelands inhabited by the dead souls of the workers who show up every day, little more than ghosts really, the walking dead, as they sleepwalk their way through the drudgery of the night or day, powerless to change their circumstances, pretending that it matters, but sometimes it overwhelmingly does not.  It’s a smart and insightful film about how shortchanged careers have become, evolving into piecemeal and part-time shifts, hardly enough to survive, where something is inevitably missing, a feeling of love and appreciation, evoking the changing moods with atmospheric dexterity, taking a poetic twist at the end, a wistful glimpse into the ambiguity of the future.
Posted by Robert Kennedy at 12:00 AM