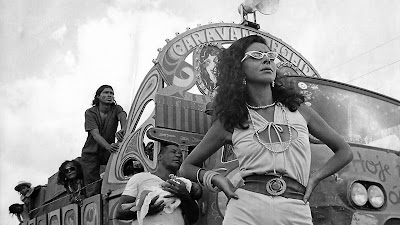 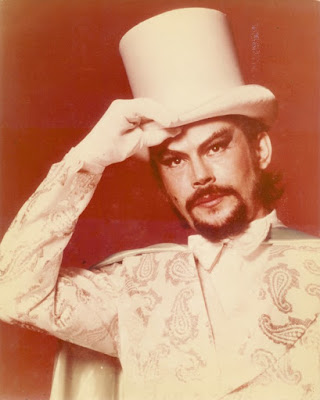 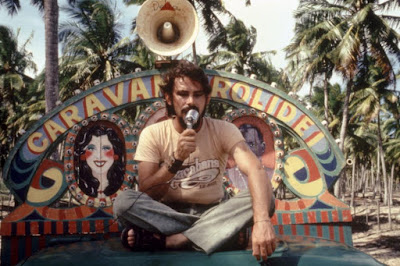 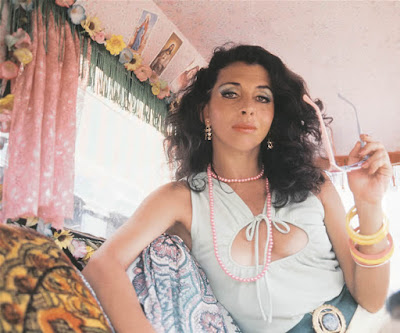 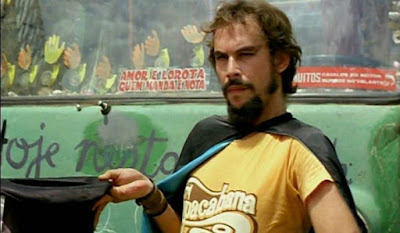 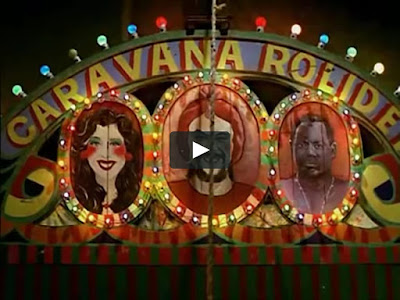 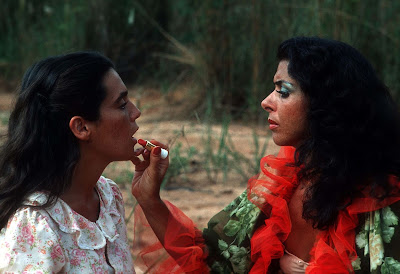 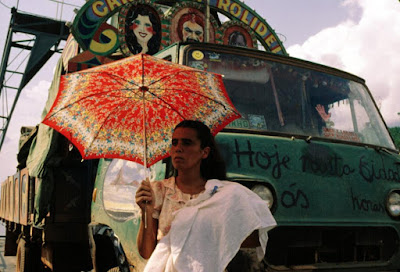 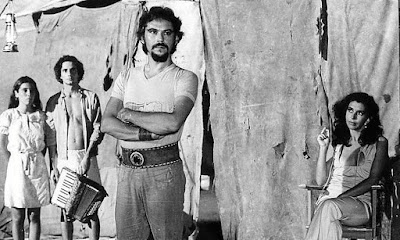 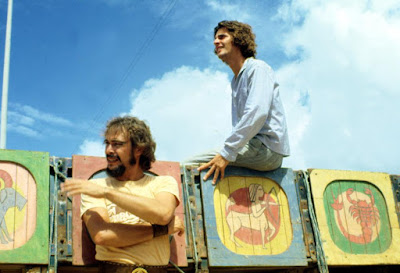 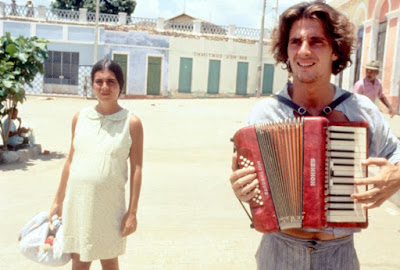 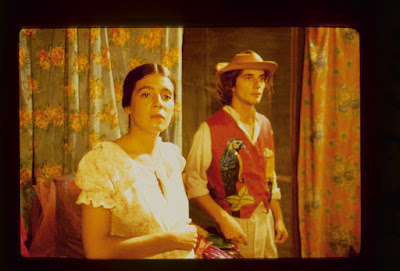 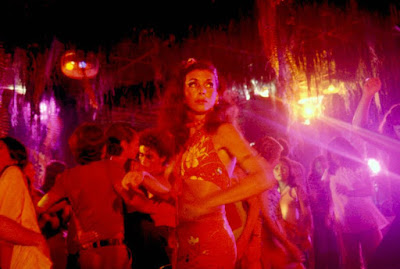 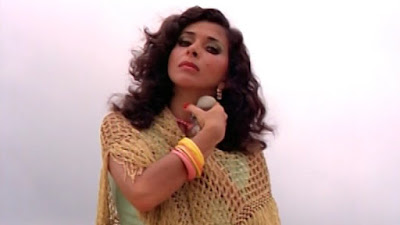 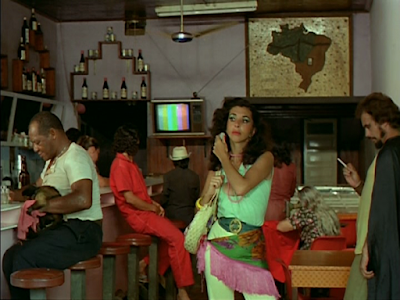 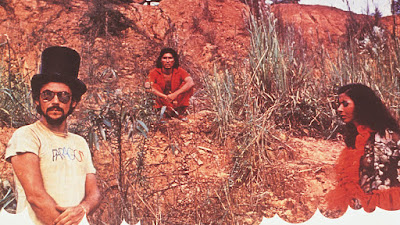 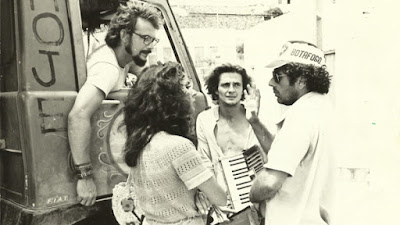 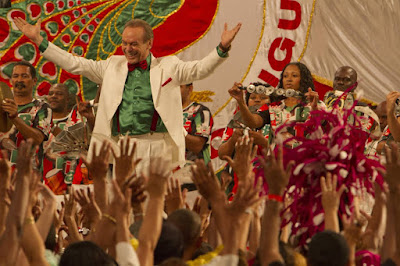 A tragi-comic road movie that literally goes in search of the Brazilian soul in this episodic quest for national identity, traveling some 9000 miles across a vast everchanging landscape into the heart of the Amazon, using a near documentary style of social realism mixed with flourishes of blatant theatricality in the form of Caravana Rolidei (Circus Holiday), a traveling circus group that scours the backwater towns in search of an audience, only to be thwarted by progress, as the national past time is watching TV, with viewers glued to the sets, disinterested in anything this road show can offer.  The overly flamboyant leader of the troupe is illusionist and “King of Dreams” Lord Cigano, José Wilker from Doña Flor and Her Two Husbands (Doña Flor e Seus Dois Maridos) (1976) playing another larger-than-life yet morally dubious role, basically a swindler and scam artist in search of an easy mark, joined by his precocious lover Salomé (Betty Faria), an exotic rhumba dancer who’s not afraid to step into the back room for a price, and deaf-mute Andorinha, aka Swallow (Príncipe Nabor), a black indigenous strong man and human flamethrower who also brings in wads of cash from high stakes arm-wrestling wagers (whose silence may reflect how the indigenous have been omitted from history).  The show is distinguished by a colorfully decorated truck that announces its arrival by loudspeaker, with master of ceremony Lord Cigano, outrageously dressed in a cape with clothes the color of the Brazilian flag, his face caked with make-up, resorting to exaggerated bravado and flowery language in describing what secrets are in store, always advertised as the greatest or most spectacular, yet in truth it’s a flimsy act barely worth one’s trouble, which is why they have to go deeper and deeper into the hinterlands to find places that buy into all the hyperbole.  The story becomes more about the people themselves, both the performers and the world at large, as it’s a beguiling and strangely compelling exposé of the slow transition into modernization, highlighted by the construction of the tree-lined Trans-Amazonian Highway that cuts through the heart of the rainforest and jungle, an ambitious project that connected the Northeast, the North, and the Central Plateau, previously isolated regions, each with their own cultural identities.  This roadway connection is an attempt to unify the country, but it comes at a price, as it’s massively expensive and destroys much of the natural world, literally plundering the resources from the rainforests, including lumber and mining development, causing pollution and water contamination, literally driving indigenous groups out of the forests, sending them into the cities where little opportunity awaits them, as companies either refuse to hire them or pay significantly less wages, a holdover of centuries of discrimination.  Additionally, government social services are unable to keep up with the population flow streaming into the cities looking for work, offering neighborhood slums for new arrivals in contrast to sleek modern skyscrapers.

Opening on the banks of the São Francisco River, we see river transport as the primary means of travel, a connection to the past, featuring a small traditional village with colonial architecture, street vendors selling herbs and various handicrafts, with folk music playing in the background.  Witnessing the performance is a peasant farmer and youthful accordionist Ciço (Fábio Júnior), grown weary of tilling the family’s barren lands, dreaming of faraway places with hopes of viewing the sea, along with his pregnant wife Dasdô (Zaira Zambelli), who barely utters a word in the entire film, yet has a profound effect, as her understated innocence and untainted vulnerability are the heart of the film, the only one without a motive, observing without making judgment, yet enduring it all, eventually bearing a child, ushering in a new future.  As the Caravana is leaving town, Ciço begs to come along, claiming he can play music, breaking into an invigorating tune, but they leave without him, only to back up and bring them along, with his accordion music playing as they head down the highway, initially to the sea, satisfying one of Ciço’s dreams, before cutting through the tropics in search of less developed regions outside the reach of advancing progress.  The seedy theatrical troupe recalls Bergman’s Sawdust and Tinsel (Gycklarnas afton) (1953), also bearing some resemblance to the traveling artists in Fellini’s LA STRADA (1954), where a more innocent Gelsomina is forced to contend with brutally crude strongman Zampanó, yet in each this life on the road was a means to escape the entrenched exploitation of the poor, offering a chance at something better, even if they barely made ends meet.  Much of what these films encapsulate is a dream for a better future, an attempt to overcome the dire impoverished circumstances of the past.  Diegues has a talent for the gritty realism of roadside photojournalism, adding a layer of complexity, capturing the melancholy uniqueness of each small village, exposing rural poverty and the inescapable reality of underdevelopment, carrying goods by ox cart, including the belongings of desperate people on the side of the road, as the stark imagery from cinematographer Lauro Escorel is as expressive in intimate moments as the sweeping jungle landscapes, becoming our visual guide through the journey.  Following shortly after the magnificent Wim Wenders film, Kings of the Road (Im Lauf der Zeit) Road Trilogy Pt. 3 (1976), there’s a curious American influence to both films, not just musically but in the presence of pinball machines in the jungle, or an indigenous family sipping coca cola, wearing designer jeans, eating ice-cream for the first time or listening to transistor radios, where their dream is to fly in an airplane.  While imagery may be what’s most remarkable about the film, they are accompanied by Chico Buarque’s uplifting soundtrack.

Featuring the contradictions brought on by globalization, with incomplete transitional stages in effect, where backwater squalor is set against a teeming urban metropolis, offering absurdly funny yet also bleakly sad reflections on the cultural impact felt across the nation.  The film reflects the changing culture of the country as it was making its transformation from military rule to a democratic government, as a rural-based society was heading towards rapid industrialization and urban migration.  Large-scale road development stimulated improved mass communication, particularly television, where broadcasting to all Brazilians was becoming possible.  With a remote interior village of Altamira advertised as a promised land, supposedly with food and wealth for everyone, a literal paradise on earth, they are surprised to discover it’s just another dusty village, a site where multi-national mining corporations are recruiting workers, flying them to remote locations where they’ll no doubt live in shabby conditions owned by the company, basically fleecing them with promises that never come, likely stuck in unimaginable filth and poverty, subjected to hazardous working conditions.  Dasdô delivers her baby out in the middle of an endless jungle, a baby girl, prompting Salomé to suggest it’s time for them to go, but Ciço is smitten by the exotic sensuality of Salomé, wanting to run away with her instead, but she sticks with Cigano, loyal to a fault.  Nevertheless, this tug of war of divergent interests keeps things interesting, with something unexpected always waiting in store for them, finding it more and more difficult to earn money, becoming destitute along the way, losing everything, forced into desperate straits, where they scatter like the winds.  Ciço and Dasdô make their way to Brasília, becoming part of a musical band in the local disco as the years pass, with mother and daughter on the triangles, doing backland variations of Bee-Gees songs, apparently doing fairly well for themselves when Ciço hears the familiar sounds of the truck loudspeakers promising an enchanted show.  Outside, a thoroughly modernized version of the Caravana Rolidey (now with a spelling correction) awaits, updated with dancing girls, a light show, and the crass commercialization of Frank Sinatra singing on cue, Frank Sinatra - Brazil (1958) - YouTube (2:55), with obscene sexual images painted onto the sides of the bus, led by the same enchanted duo of Lord Cigano and Salomé, suggesting sex never goes out of style.  Despite the allure of getting the band back together again, Ciço defers, liking the way things are, no longer searching for that elusive dream that never comes.  As the neon-lit bus heads down the road in pitch blackness, Cigano claps his hands and conjures up a morning sunshine, like Prospero in The Tempest, suggesting there’s something inherently magical about being Brazilian after all.
Posted by Robert Kennedy at 12:01 AM