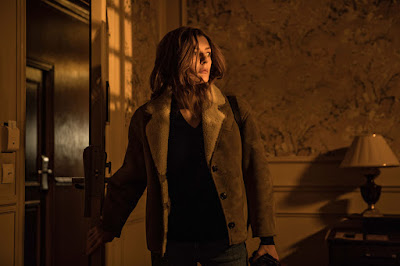 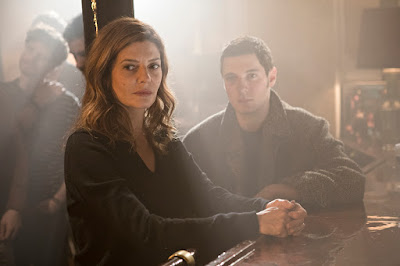 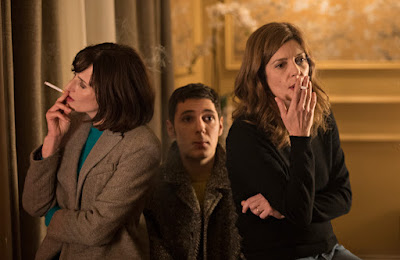 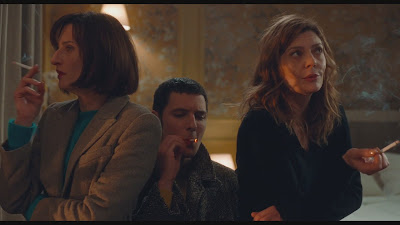 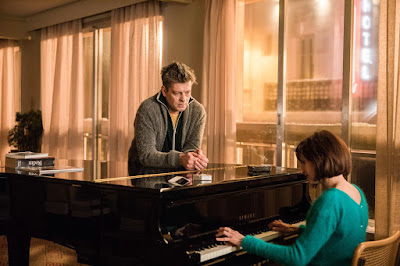 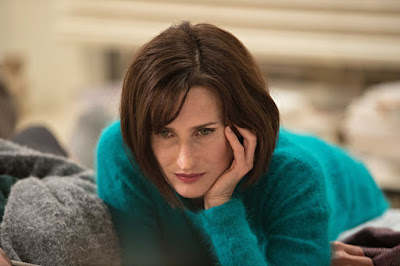 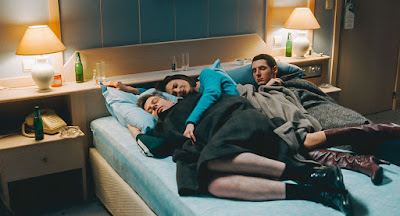 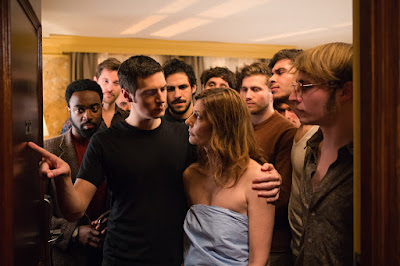 This is a quintessential French film, filled with Frenchness.
―Festival programmer Alissa Simon introducing the film

The origin of the film happened to be a viewing of Leo McCarey’s THE AWFUL TRUTH (1937), a screwball comedy from the 30’s starring Cary Grant and Irene Dunn.  From that, Honoré started writing a screenplay for Chiara Mastroianni reimagined as a Cary Grant character, becoming the director’s first film shot in a studio, beautifully shot on 35mm in glorious color by longtime cinematographer Rémy Chevrin who has worked with this director since his first film, recreating a love farce as a comic fairy tale of magical whimsy, all taking place over the course of one night, intertwining ghosts of the past and perfumed songs of the night to comment upon a marriage that has lasted 20 years, but subject to introspection, asking all those delicate questions about what might have happened, playing the “what if” game.  Deliriously exaggerated and over the top, it plays out in a freewheeling screwball comedy mode, using a casually blasé Chiara Mastroianni as the ever-charming serial cheater in marriage, cast as Maria, a law professor, seen screwing one of her students near the opening, basically in love with his name, Asdrubal Electorat (Harrison Arevalo), but she seems to make a habit out of it.  Having a way with words, she seems to be able to rationalize all behavior, finding justification for pleasure, never thinking of it as a threat to her marriage.  Meanwhile, her faithful husband Richard (Benjamin Biolay, married to Mastroianni for three years in real life, divorced in 2005, sharing a daughter) stays at home, having given up a promising career as a jazz pianist, and has suspected nothing through the years, but discovers a trail of romantic messages left on her cellphone.  Confessing everything, all revealed as a matter of fact, Maria has no reservations or regrets, thinking it’s near impossible to stay faithful to a single man all your life, that occasional flings are good for the soul, kind of an existential recharge.  Crushed by these revelations, Richard tries to console himself alone, particularly after a stinging remark asking if he would have been happier marrying his piano instructor, so Maria, ever vigilant, grabs a suitcase and moves to the Lenox Montparnasse Hotel directly across the street (without telling him) into Room 212 (the French title) where she can keep an eye on her husband.  From the outset, the film is viewed through Maria’s point of view, where her vivaciously brash manner is utterly spellbinding and aggressively appealing, appearing casual and upbeat, always having the last word, as she seems to be a woman on a mission, with her sexual impulses on overdrive, yet continues to be loving and extremely respectful to those inhabiting her world.

Once in the hotel, however, the mystery begins, with Vincent Lacoste from Honoré’s Sorry Angel (Plaire, aimer et courir vite) (2018) suddenly appearing as a 25-year old version of Richard, handsome and charming, but more flirtatious and energetic, eager to see her again.  A bit flummoxed by the visit, she has to look across the street to believe her eyes, as she’s able to see two version of him at the same time.  This younger Richard is ready to pick up where things left off, as he’s the man she fell in love with, but no longer exists, seemingly the dilemma of every marriage.  When her mother shows up scolding her from the other room, it’s like returning to her youth, having to answer to authority.  Torn by her situation, wondering whether she should she cheat on her husband with this younger version of her husband, the young man is ready to go for it, suggesting it’s the best of both worlds, as this is what she really wanted all along.  However, like a crisis intervention, more spirits appear, this time it’s Richard’s former piano teacher and first love, Camille Cottin as Irène Haffner, suddenly her rival in love getting into it with her.  While the two don’t exactly get into a catfight, Maria is a bit flustered by this turn of events, feeling a tinge of jealousy, with Irène ready to console the man alone across the street, believing she can offer what Maria can’t, marital fidelity, which feels like a real slap in the face.  But that’s the kind of film this is, where fidelity is viewed as a low blow in this mischievous night of returning spirits, resuscitating old wounds, delving into all manner of unanswered questions that leave her feeling a bit haunted.  Even a man pretending to be a fake Charles Aznavour shows up ready to perform his crooning piano lounge act in a leopard sport jacket while attempting to be the voice of reason.  This kind of film is all about comic timing, abrupt changes of pace, and shocking new revelations that arrive at every turn, often making audiences howl with laughter while also exploring a more serious side.  In no time, the room is filled with scorned lovers, filling up every conceivable space, each wanting a piece of her, like an insurrection of her troubled conscience, while she tries to hold it together.  Meanwhile, Irène confidently makes an appearance across the street, surprising Richard, catching him off guard, where he has to question whether he’s ready for this.  Despite Irène’s sensual advances, suggesting she’s the answer to all his prayers, Richard still has feelings for his wife, refusing to believe she’s left him, thinking she could return at any moment, and that they have too much invested to simply abandon it all now, thoughts that utterly jolt Irène’s senses, stopping her in her tracks, realizing she was never an option.

There’s a curious flash forward to an older Irène (Carole Bouquet) living alone in a sandy beachside cottage, finding herself surrounded by bohemian artworks, with no need for a man in her life, yet her options are open if the right woman comes along, suddenly gazing over at Maria, who has to immediately snap out of it.  The film is built around themes of wondering what might have happened had they made different choices, featuring a constantly inventive theatricality, including roving camera movements that reflect a curiously changing stream-of-conscious mindset, and selective choices of music that add a hauntingly melancholic tinge to the proceedings, from the austere minimalism of Recomposed by Max Richter - Vivaldi - The Four Seasons ...  YouTube (4:42) to a flabbergasting use of Barry Manilow, Barry Manilow - Could It Be Magic (original 1973 album ... YouTube (7:17), where every word of the lyric suddenly erupts with newfound meaning, surging in every direction (“Whirling like a cyclone in my mind”), creating a kaleidoscopic emotional whirlwind that’s quite effective, eventually becoming a sorrowful introspection of love.  Honoré’s films tend to leave audiences sharply divided, and his use of songs as an extension of the narrative is no exception, as he doesn’t accompany songs with traditional dance numbers or a lively choreographed sequence à la Jacques Demy, but instead delves into the downbeat psychological mindset of the character, often submerged in anguish, lost love or grief, where musical numbers are used in the exact opposite manner of one’s usual association, namely happy and upbeat.  This pattern has continued throughout Honoré’s films since DANS PARIS (2006), and while there may be few admirers of the pop music of Barry Manilow, the poetry of the lyric is cleverly interwoven throughout this film, creating a melodious rush of energy and exhilaration, where the music literally soars with a yearning for love.  While set in the present, with Paris essentially viewed as the city of love, the distinct look of the film embraces a nostalgic era of yesteryear, evoking Paris of the 60’s with no turmoil, free of consequences and responsibilities, where everyone chain smokes and orders fancy cocktails while getting through the existential crisis of the day.  Expertly written and staged, the film displays rare aesthetics, but the real star of the show is Chiara Mastroianni in a seductively alluring performance, awarded best actress in the Un Certain Regard section at Cannes, bewitching and so at ease, a frequent collaborator with Honoré and his thoroughly enchanting style of film, with interior feelings remaining ambiguous until the end, filled with dreams and doubts, where comedy and regret go hand in hand, along with hope and disillusionment.
Posted by Robert Kennedy at 12:01 AM