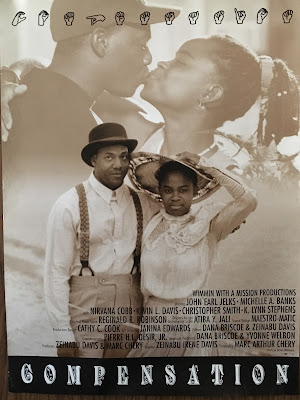 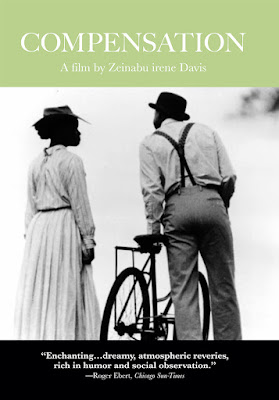 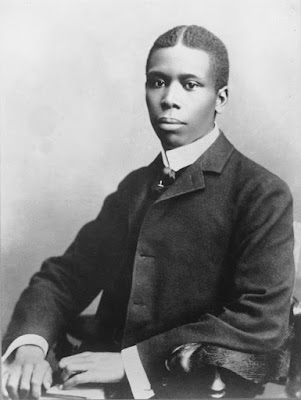 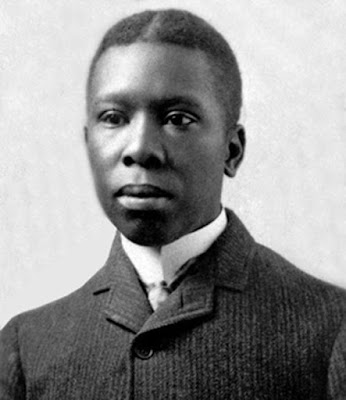 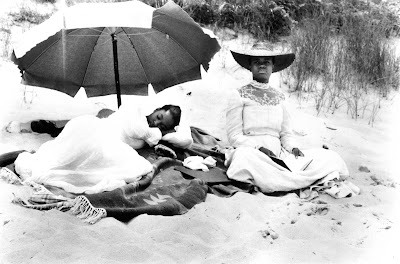 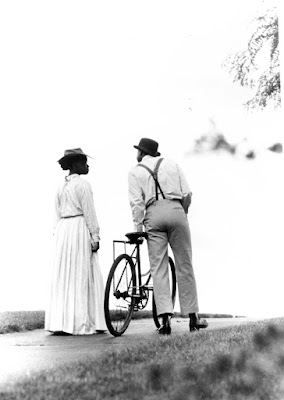 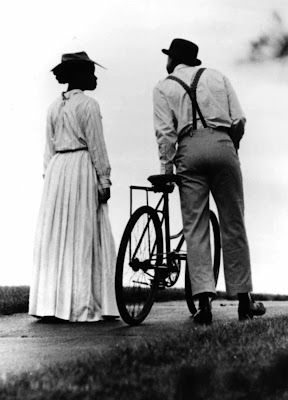 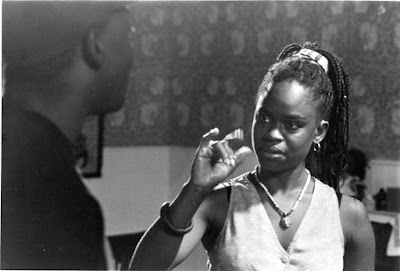 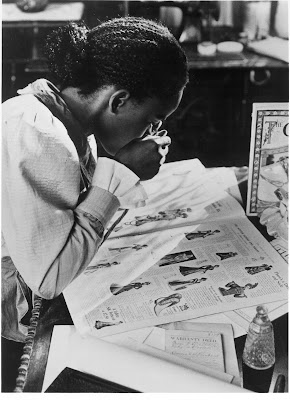 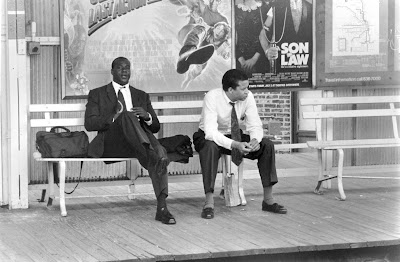 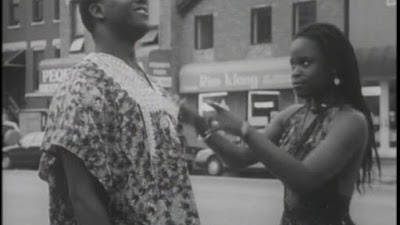 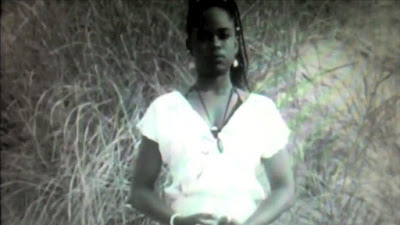 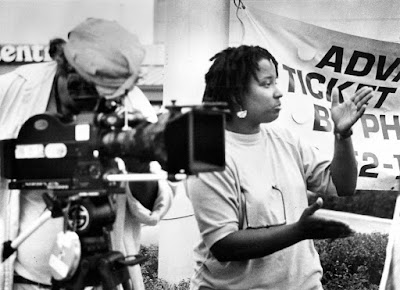 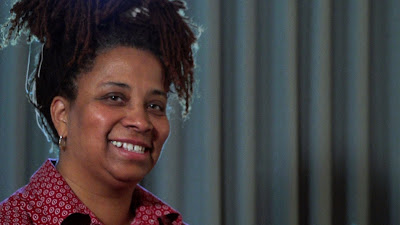 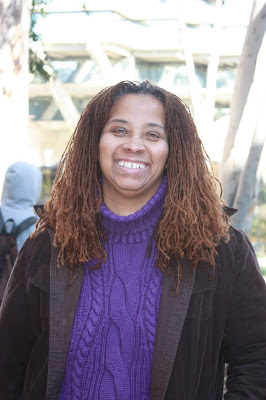 Because I have loved so vainly,
And sung with such faltering breath,
The Master in infinite mercy
Offers the boon of Death.

Inspired by the Paul Lawrence Dunbar poem, Davis sets the film in Dunbar’s time, in the style of early 20th century pictures, complete with title cards and original ragtime piano accompaniment by Reginald R. Robinson a few years before he won his MacArthur Genius Grant.  Perhaps more importantly, the story is told using vintage historical photographs that effectively tell a story of black history, written by the director’s husband March Arthur Chéry, complimented by recreated scenes with live actors which are notable for a written storyline accentuating the world of the deaf, set in two different time periods, 1906, leading to the great migration north to Chicago, as well as the present day, using many of the same actors in both time periods.  Seamlessly integrated throughout, made on an indie film budget for only $125,000, the black and white film shot by Pierre H. L. Desir Jr. on 16mm accentuates the historical look, shot in and around Chicago and the Calvary Baptist Church in Evanston, including notable scenes shot on the grounds of the Northwestern University campus, while the beach scenes, made to resemble the look and turn-of-the-century eloquence of Julie Dash’s Daughters of the Dust (1991), were shot at the Indiana Dunes, where industrial smokestacks from the nearby city of Gary are visible off in the distance.  Dash and Davis are both part of a collective of black students from UCLA called the L.A. Rebellion, originating in the late 60’s and 70’s following the aftermath of the Civil Rights and black liberation struggles, the war in Vietnam, and the full-blown destruction of the Watts riots, telling stories about black people that hadn’t been told before or disappeared from cultural erasure, reclaiming control over their own identity, creating a new black cinema, mentoring and paving the way for new young black directors, both male and female, reclaiming black cultural symbols, highlighting aspects of black history omitted from Hollywood depictions, while determined to offer a transformative vision of a better society.  Daughters of the Dust, the first feature by a black woman to be commercially released in the United States, exemplifies a new black aesthetic, as does this film, using silent film techniques to explore new ways to communicate and view the world around us, amusingly reenacting The Railroad Porter, one of the earliest black silent films that has been lost, along with 75% of the silent film archives, intentionally mixing black history with a deaf culture, explicitly accessible for both deaf and hearing viewers, offering a surprising tenderness in tone.

According to the director, the film was not written originally for a deaf woman, but she happened to be in Minneapolis searching for some interesting live theater to see and wandered into a deaf theater production of Waiting for Godot, finding Michelle A. Banks in a starring role and immediately knew she was right for the part, appearing here as Malindy in 1906, college educated and highly literate, but working as a professional seamstress, attending Kendall School for the Deaf until blacks were expelled in 1904, reserved exclusively for whites, with blacks sent across the country to find another deaf school, remaining segregated until the landmark Supreme Court decision in 1954, Brown v. Board of Education.  In this way, segregated blacks could easily understand and relate to colonized people occupied elsewhere, developing similar psychological patterns, as evidenced by Franz Fanon in his book White Skin, Black Masks.  While the deaf culture is marginalized as well, Malindy is a strong advocate of education and knowledge, regularly seen writing in her diary, as it gives her strength and helps embolden her, always comfortable in her own skin, developing the confidence necessary to enter into a relationship with a hearing boyfriend, Arthur, John Earl Jelks, getting little support from those in the deaf community who have learned to distrust the hearing culture.  What’s particularly poignant are the extremes taken in attempting to communicate, which may include sign language (which the partner would have to learn), writing on paper (where the partner would have to learn to read), and also the facial and bodily expressions, which are quite revealing in themselves, as they accurately convey the mood.  One of the recurring motifs is watching Malindy on the beach dancing to music that she hears in her head, while flute music written by African percussionist Atiba Y. Jali plays for viewers, creating a sense of empowerment, but also grace and beauty in the delicate movements.  This sense of appealing to the Other, to someone outside one’s culture is impressive, not only for the developed sense of intimacy, but the discovery of new attitudes and ideas, which are a key component to acquiring knowledge, contrasted against demeaning archival photographs reflecting a steady stream of racial intolerance.  The film is impressive in exploring Pan African spirituality, including symbols and various trains of thought, all contributing to Malindy’s independence, confident of her own view of herself.

When the film moves to the present, freely moving back and forth in time, Malindy becomes Malaika, both played by the same actress, now with a job as a graphic designer in a printing shop, visibly seen wearing more contemporary clothing.  While she has a deaf friend Billie (Christopher Smith) that works with her, seen performing a dance at a café to the sounds of the poem Compensation, she is enchanted by the effort made by Nico (John Earl Jelks) to appeal to her, actually learning some introductory sign skills, causing her to jump with delight (“You’re speaking my language!”), enthusiastically exploding with multiple phrases, none of which he understands, but it reveals the untapped reservoir of emotions just waiting to share.  Nico is particularly interesting, as he’s a burly man with a big physique, yet defying racial stereotypes, he works as a librarian in the children’s section of a black community, showing warmth and sensitivity, usually greeting the kids with a spontaneous joy, happy to put a smile on their face, but he’s especially engaging with the kids in a call and response version of Dunbar’s A Negro Love Song, energetically repeating the refrain, “Jump Back, Honey, Jump Back,” Bobby Norfolk - Jump Back YouTube (1:31).  Davis throws in derailing afflictions from each era, pneumonia in the earlier time period and contracting the HIV virus in the 90’s, both having a devastating impact, offering the context of impending death in both parallel relationships, which elevates what’s at stake.  This confused state of mind is expressed through fractured images, using an experimental film montage of images overlapping into one another, overexposing the film, creating a psychologically disorienting effect, yet a sense of urgency is established throughout, where the extraordinary performance by Michelle A. Banks is poignantly affecting, not willing to waste her time on just anybody, but placing great faith in these individual men who are taking a chance on her.  The directing and storytelling are equally impressive, as this is a radically different kind of feature, even for an independent film, with remarkable use of archival photographs, where the sophisticated sound design is a beautiful counterpoint to the quietness of the film, yet the storyline pulls the audience into their vastly different world, where viewers are more than willing to embark upon what feels like a genuinely authentic journey, where the payoff is experiencing a superlatively designed film that actually produces a new consciousness, directed, co-edited, and produced by Davis.  Surprisingly, the influence of this film is all over the recent Todd Haynes film 2017 Top Ten List #6 Wonderstruck, both set in two different eras, both featuring deaf characters, using deaf actresses, both prominently featuring silent film era techniques, yet there are no acknowledgements in the credits from Haynes offering thanks or “compensation” to Ms. Davis.
Posted by Robert Kennedy at 12:00 AM