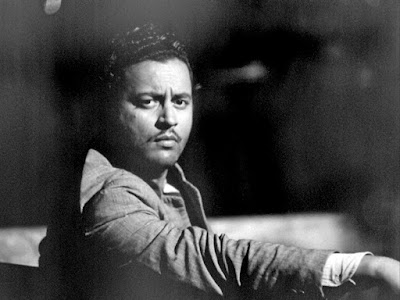 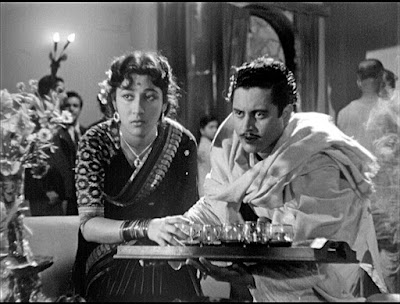 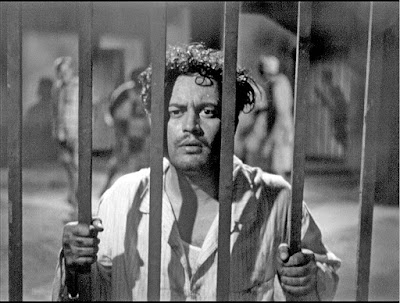 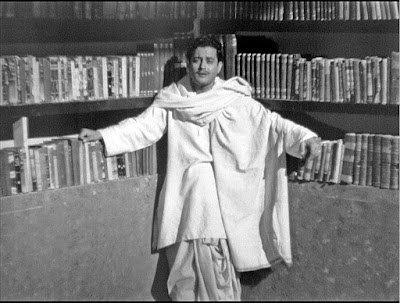 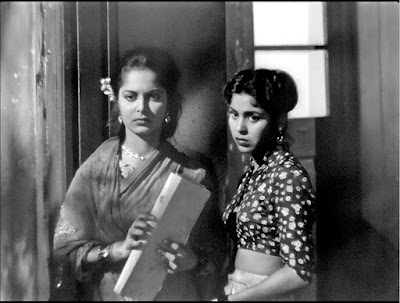 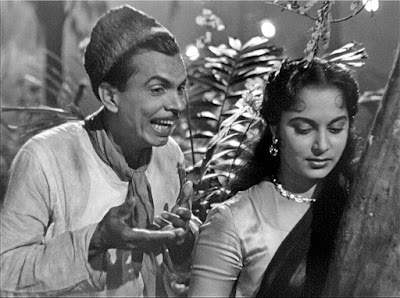 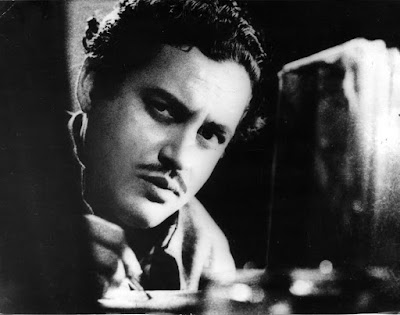 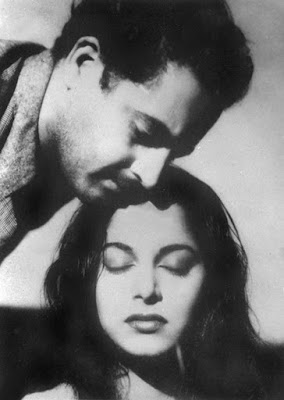 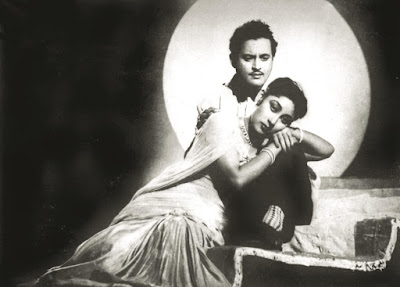 The world where life is considered trivial.
A world where the dead are worshiped
A world where death is cheaper than life
For what shall it profit a man
If he gain the whole world and lose his own soul?

Revived in France in the mid-1980’s, this 1957 melodrama by Indian filmmaker Guru Dutt placed high on Cahiers du cinéma’s ten-best list, while also voted one of the best 100 films of all time by Time Magazine.  The period from 1940 to the 1960’s is regarded by film historians as the Golden Age of Bollywood, coinciding with the nation’s independence from Great Britain in 1947, ushering in an era of great hope and new artistic expression, with Satyajit Ray pioneering the nation’s art cinema, while more commercial filmmakers were incorporating Hollywood melodramas and Italian neo-realism into the Indian tradition of musical narrative. But after a decade of democratic freedom, a realization sunk in that among the great post-colonial tragedies were masses of humanity overflowing in poverty, where this film accentuates a moral hypocrisy of the greedy, completely overlooking impoverished communities all around them in their rush to live a comfortable middle class life, looking down on others as if they don’t exist, where human value becomes equivalent to monetary importance.  Dutt grew up during the fight for independence, during the traumatic years of the 30’s and 40’s, with a nation struggling with famines, changing social customs, and a global fight against fascism.  Outraged by India’s savage poverty and inequalities, Dutt’s skill lay in communicating that outrage through his art, which distinguished him from other directors of his era, the first to integrate song numbers within the narrative, yet his downbeat style has been described by noted film critic and columnist Iqbal Masud as “poetry of defeat.”  This socially conscious subject matter is unusual for a Bollywood film, where the musical numbers drive the film, providing the internalized heart of the narrative, usually lively and upbeat, filled with exquisitely enhanced choreographed dance numbers, yet here a melancholic sense of outright disdain and mournful rejection is everpresent, focusing upon an individual’s struggle in a rapidly modernizing society.  Intending to star Dilip Kumar, an actor known for his tragic portrayals, he felt the subject matter was too close to his role in DEVDAS (1955), so he never showed up on the set.  Dutt himself plays Vijay, an unpublished poet in Calcutta, angrily dismissed and thrown out of his home by his self-centered brothers for not working, where unemployment epitomizes the hopeless state of the Indian youth in post-colonial India, while his poetry is viewed as too painfully dispirited for mainstream publishing, where each gives away pages of his poetry for scrap paper, leaving Vijay to fend for himself on the streets, mingling with prostitutes and the homeless, where his only friend is a comically eccentric massage oil street peddler named Sattar (Johnny Walker), whose songs hypnotize potential clients.  In the realist tradition, Dutt wanted to shoot certain scenes in the red light area in Kolkata (Calcutta), but after the crew was attacked by a group of pimps, they built a set in the studio instead, where the artificiality of the set design is pronounced, accentuating the dreamlike beauty of the cinematography by V.K. Murthy, beautifully mixing the shadows and light of German expressionism, a foundation of film noir, with Dutt coming out of the shadows much like Harry Lime in THE THIRD MAN (1949), yet he is equally at home in an enthralling recreation of a dreamy Busby Berkeley-style stairway to heaven, Hum Aap Ki Aankhon Mein | Pyaasa | English subtitles YouTube (6:10).

What makes this film so astonishing is the combination of artistic forces working so well together, where the music (composed by the celebrated music director S.D. Burman, with Dutt’s songs performed by Mohammad Rafi), lyrics (written by Urdu poet Sahir Ludhianvi), acting, and moody artistic look of the film are all enhanced by each other, including an extensive use of close-ups, becoming Dutt’s magnum opus from a story he had been working on since 1947.  Always concerned with the plight of the impoverished artist, here he plays an unrecognized and misunderstood artist, college educated, where flashback scenes to his college days show him as one of the more popular and influential students, creating an impromptu poem on the spot in class at the sight of fellow student Meena (Mala Sinha), developing a love affair, as his collection of poems are filled with writings about Meena, but she left him for the security of a rich husband (who turns out to be the publisher), telling Vijay that love alone is not enough to survive.  Subsequently, Vijay’s life is a continual series of disappointments, rejected by publishers, who urge him to write about love and romance.  “Who will read your laments about poverty and unemployment?”  But Vijay refuses to sell out to popular demands, discouraged by the lack of moral conviction in the building of his nation, so easily dismissing a voiceless underclass, determining they are too poor to matter, so he uncompromisingly speaks out for them in his poetry, but faces one dejection after another.  Having lost everything, with nowhere to go, he’s sitting on a park bench but hears a woman’s voice singing one of his poems, and follows her out of curiosity.  She turns out to be Gulab (Waheeda Rehman, simply radiant in her first major role, becoming the director’s real-life love interest), a prostitute luring him as a potential client, angrily dismissing him when she discovers he has no money.  But when a poem falls from his pocket on departure, she compares the handwriting and discovers he is the same poet who wrote the song she was singing, also a collection of poetry that she picked up for nothing, verses she admires and loves, feeling bad at her mistreatment, but by being enamored by his poetry, she respects his message and the moral principles he advocates, where it becomes clear she is the only one who truly understands his heart.  Over time, viewers realize that she’s fallen in love with him, but no words are exchanged, no acknowledgment is made, nonetheless it becomes evident, though always from afar, beautifully depicted in this dreamlike romantic ode to Krishna sung by a street singer, Pyaasa - Aaj Sajan Mohe Ang Laga Lo YouTube (4:56), actually sung by his wife, Geeta Dutt, given a spiritual dimension, symbolizing the grace and purity of their own union.  Both live on the outskirts, thoroughly rejected by the mainstream, each powerless to overcome their doomed fate, unexpectedly finding solace in one another.  Given an autobiographical sense, Dutt died at an early age of 39 from a combination of sleeping pills and alcohol in what might have been his third suicide attempt, dejected that his films weren’t commercial successes, refusing to put his name on later efforts when he suffered from excessive drinking.  This personal despair of being down and out, with suicidal thoughts, is present here, formalized in a tragic railyard scene that becomes a pivotal moment in the film, especially when he gives a beggar his jacket and is mistakenly identified as dead.

Like something out of Sullivan's Travels (1941), Vijay’s death is announced by the media and suddenly his name is an overnight success, becoming a huge celebrity, a cultural icon where his poems are acclaimed nationwide.  The same publisher that refused to print his poems earlier is now making a killing in record sales profits, as his poetry is posthumously lionized.  In an odd twist, however, Vijay is still alive but languishing in an asylum in silence, as he hasn’t spoken a word since the accident.  When a nurse reads a book of poetry to him, it activates his memory and identifies himself as the author, but doctors believe the celebrated poet already dead, determining he suffers from insane delusions, keeping him confined against his will.  By hook or crook, and the magical reaction to his friend Sattar’s infectious music, Vijay escapes the asylum.  When the publisher and his brothers learn he is still alive, they devise a contemptuous scheme to cynically refuse to identify him so not to jeopardize their profits, calling him an imposter, representing the corruption and pervasive sickness Vijay writes about in his poetry, which takes the form of social protest, railing against those who put their own interests above the needs of others, allowing mass suffering to continue unabated, as exemplified by a cruelly devastating scene of a dancing prostitute unable to console her crying baby, using an avant-garde style of fractured images to reveal her tortured mindset.  When the one-year anniversary of the dead poet is commemorated in a public ceremony, with everyone claiming they knew him or helped him along the way, Vijay shows up and hears the publisher taking credit for his thoughts and efforts, decrying the greed and mass hypocrisy as a sham, singing from the balcony in that sorrowful style all his own, quiet and heartfelt, offering a bitter condemnation of such a heartless and materialistic world where he was despised and rejected, Yeh Duniya Agar Mil Bhi Jaye--Pyaasa, English Subtitles YouTube (4:57), and those same people who claimed they helped him now cry out that he is an imposter, creating a mass riot, yet despite being manhandled and trampled, he escapes unharmed.  At an event where he is invited to read his celebrated poetry and publicly announce his identity, he rejects them all, telling those that worship at the altar of the poet Vijay that he is not that person.  Shunning celebrity and fame, even the promise of untold wealth, Vijay rejects it all, becoming an uncompromising figure that walks away from the petty cruelties of everyday existence.  Reminiscent of Dostoevsky’s The Grand Inquisitor from his epic novel The Brothers Karamazov, with suggestions that if Christ returned today, in today’s cynical world, he would not be recognized, that organized religion would immediately disavow his importance and reject his message, calling him an imposter, as they’re insistent upon teaching their version of the Christ parable, with a supreme authority that remains unchallenged.  The ingrained teachings of the church today are the result of centuries of sending the same message, where they are simply not capable of adjusting to a new living Christ.  In Dutt’s original version, he walks away a man alone, wandering an endless landscape.  But an alteration was imposed on Dutt by the distributors, creating a more ambiguously hopeful ending, finding Gulab, where the two of them make that journey together.  While the audience is aware of her steadfast loyalty and love from the outset, with multiple scenes of silent yet devout expression, becoming the Mary Magdalene figure in the life of Christ, a prostitute with a heart of gold, developing an everlasting bond between them.  From the audience’s perspective, it’s actually Gulab and not Vijay who embraces a spirit of love.  She was transformed through his written poetry, finding meaning in his language, and learned to love the man who wrote them.  Love is not only their salvation, but ours as well.