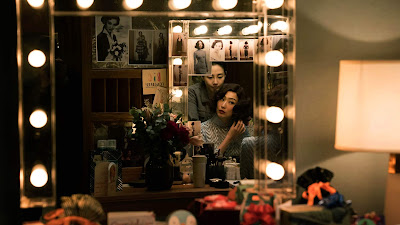 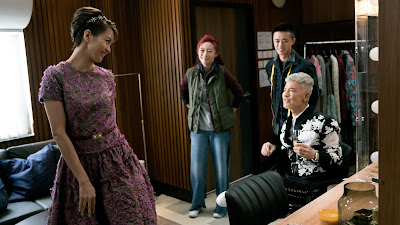 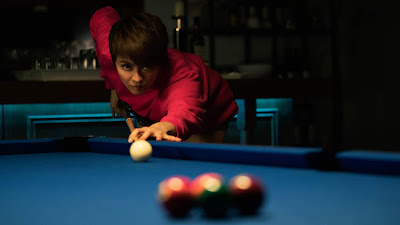 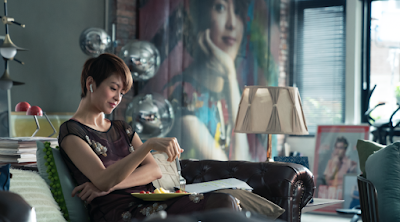 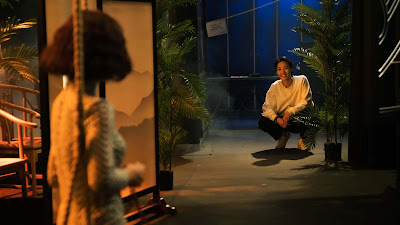 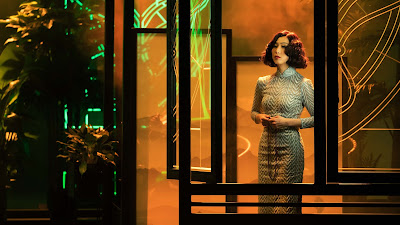 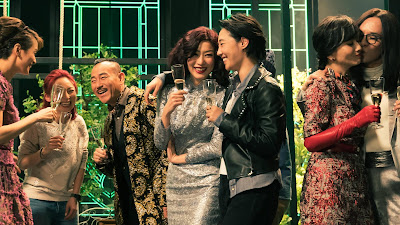 It’s been 15 years since the last Stanley Kwan film played in Chicago, when Everlasting Regret (Changhen ge) (2005) played at the Chicago International Film Festival with the director present, creating a love letter to the city of Shanghai, claiming the city was in such a rapid state of transition that it was very hard to find any locations left of Old Shanghai, shooting most of his film indoors at just a few selected sites.  Known for exploring the changing roles of women, shifting views on sexuality, and a postcolonial identity of Hong Kong, Kwan is Asia’s first openly gay director, where his best earlier works are literary adaptions of female writers, all previously shot on 35mm, notable for having a luminous quality with lush, bright colors and a heavily romanticized view, specializing in lurid stories of fallen women, told in dramatic fashion, showing great empathy for both women and their performances, helping to usher in the hyper-sensualized era of Wong Kar-wai in Hong Kong films.  Premiering at the 10th Asian Pop-Up Film Festival, run by the unflappable and highly energetic Sophia Wong Boccio, this film couldn’t be more radically different than his earlier films, largely because it’s shot on digital, which flattens out the picture while eliminating the richness of detail, bleaching the color out, making it look overly sanitized, overlit and brightened as if in a drug store.  While this is fairly typical of what films of today look like, as if made to be seen on television, it’s nonetheless a major disappointment, as Kwan’s films were beautifully subjective immersive experiences.  On top of that, this is a pretty silly story, like a gossip-fueled soap opera about a petulant younger generation that thinks only of itself, having little or no connection with history, yet living in extravagant wealth, revealing a sense of entitlement and ingratitude.  Made a year before the prolonged street demonstrations and protests of 2019 in Hong Kong, courageously standing up to the police, triggered by changes in laws that restricted longstanding freedoms, eroding the one country, two systems principle in practice since the 1997 handover, with Hong Kong openly defying the repressive tactics of the Mainland to force Hong Kong to capitulate, yet there’s no sign of that here, offering little insight into the current mindset of political dissent, painting a different picture altogether of shortsightedness and the small-minded pettiness of people today.  While Kwan has never had his pulse on politics, he has had a grasp of history, showing great insight into the connections between Shanghai and Hong Kong, with the film industry moving to Hong Kong after the Japanese invasion and occupation in the 30’s, yet here Shanghai is just a distant memory.  Instead the film explores Hong Kong’s tenuous relationship with Beijing, suggesting the future of the Hong Kong film industry depends upon it, with Kwan introducing LGBT themes and characters in a conventional drama, embracing controversial elements as commonplace in a dizzyingly scatterbrained comedy/farce/drama that might be difficult for Beijing to accept.

Devising a story entirely consisting of women, where men are simply unnecessary, Madame Cong (Angie Chiu), the matriarch of a wealthy Shanghainese family in Hong Kong, is financing the production of a new play in Hong Kong’s illustrious City Hall entitled Two Sisters, written by a trans woman Ouyang An (Kam Kwok-leung), who is personally resentful that she’s not fully accepted as a woman by her colleagues, even after gender reassignment surgery, starring legendary actress Yuan Xiuling (Sammi Cheng), making a comeback after a 5-year retirement from the theater, and He Yuwen (Gigi Leung), a TV actress making her stage debut.  While the story is ostensibly about a stage performance opening in a week, pitting rival actresses that have a longstanding history, with buried resentments rising to the surface, as nearly everything that we see happens backstage or behind the scenes, with the two actresses refusing to acknowledge or even speak to each other.  While the younger He Yuwen openly undermines her counterpart at every opportunity, apparently having some hidden agenda, like living under her rival’s shadow since they started out with the same acting instructor, she continually interrupts rehearsals with spontaneous banquet festivities, where instead of being onstage she’s constantly treating herself (and a party of friends) to sumptuous gourmet dishes accompanied by glasses of wine, seemingly making herself look important by flouting her wealth to win influence and favor.  Yuan Xiuling is not amused, feeling Yuwen has slept her way to the top, but is especially frosty when her filthy rich, lesbian girlfriend wannabe Fu Sha (Bai Baihe) joins in the festivities, ruffling her feathers, as if sabotaging her on the set.  Their relationship is a bit mysterious, as it began with Fu Sha as a pre-teen adoring fan showering praise on the older actress, developing into a longstanding friendship, with the adoring fan always wanting something more, while the actress has been jolted by the death of her husband, Cheng Jun, and while it happened a year ago, she’s still suffering the emotional and economic aftereffects, as he was the younger brother of Madame Cong, but also a serial womanizer, dying in a plane crash with one of his girlfriends, making her the subject of tabloid fodder.  Yuan Xiuling seems to require peace and quiet to get away from it all, with her husband leaving her nothing, finding herself broke, learning how to scrape by, while He Yuwen has turned rehearsals into a circus atmosphere filled with fawning admirers, drawing attention to herself, where she wants all the attention.  Complaining to Madame Cong that her lines are significantly less than Xiuling’s, she has devised a rewrite plan using a successful screenwriter to alter the script, in her favor, of course.  But when Madame Cong mentions this to Ouyang An, in typical melodramatic fashion, strains of an operatic aria can be heard in the background with the playwright calling for air, suddenly feeling faint, collapsing with a heart attack and immediately sent to the hospital.  Yuwen’s brazen insolence becomes the theatrical pinnacle of drama and jealousy, nearly bringing the entire production to a halt.

Early Kwan films emphasized the dangers of tabloid journalism, delving into the personal life of a leading actress, hounding her mercilessly, revealing how it led to the suicide of silent film star Ruan Langyu in Center Stage (Yuen Ling-yuk) (1991), while here the entire drama centers around incessant gossip happening behind the scenes, creating a kind of screwball comedy melodrama, using rumors and backstabbing as a conventional means of communication, occasionally drifting into hysteria, accentuating the role of a rabid gossip reporter who follows the lifestyles of showbiz personalities as if her life depended upon it, but with little essentially to laugh about.  It’s ironic that the same subject that was viewed with moral condescension decades ago has now become the centerpiece of Kwan’s new work, as if reflecting a new normal, revealing a culture with a short attention span, spoiled by wealth, which allows individuals to incessantly pamper and indulge themselves with little thought for others.  At the same time, Kwan pokes fun at himself, continually evoking references to his earlier film Rouge (Yan zhi kou) (1988), as Yuwen apparently won the lead role over her rival, prompting Xiuling’s abrupt retirement, yet never turns this into a blood feud or catfight between the two women, as Xiuling remains overly reserved, as befitting her stature as a more mature woman, where the key to her success is aging gracefully.  Interestingly, viewers gain insight into both woman through their personal assistants, with Yilian (Catherine Chau), a single mom and former pool hall girl, used to the emotional histrionics of Yuwen, who is a born diva, but has been helped out by her when she was down and out in the past and wants to remain loyal, while Xiuling’s aide Nini (Qi Xi), a Mainlander relative of Cong, acknowledges that her position is one of privilege, each commiserating with one another, sympathetic of their counterparts, overly fortunate to be in their positions.  With a seemingly tacked on happy ending, matters resolve themselves with surprising ease.  Despite Kwan’s reputation for enhancing female performances, this is little more than a lighthearted TV drama filled with conventional stereotypes and precious little depth or insight into the human equation.  It’s hard to understand what drew him to the material, as there’s little empathy towards any of the characters, with no real performances of note, more than a little uncomfortable to watch, and no dramatic heft whatsoever.  Very few films could possibly succeed when driven by gossip alone, and this is no exception.  Even the money shot, with both actresses on a balcony overlooking Victoria Harbour in a sumptuous backdrop, wondering about the future of their industry, fails to register, as the material for this film is so slight, resembling a farce, perhaps meant to be funnier, but instead it’s just frenetically fast-paced dialogue that never really amounts to anything.  Kwan’s earlier film SHOWTIME (2010) premiered at the Venice Film Festival and was only released in Hong Kong, never screening anywhere else.  From one of the best directors to ever work in Hong Kong, this is a major step down, and a reflection of the flailing industry at the moment that he can’t work with better material, as reflected by a scene where Yuwen takes a taxi only to discover the driver is the former Hong Kong director that discovered her, revealing just how difficult things have gotten.
Posted by Robert Kennedy at 12:00 AM