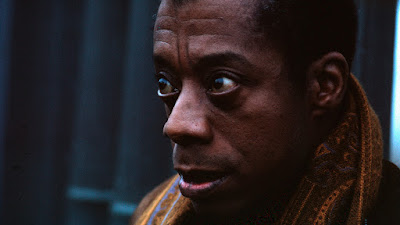 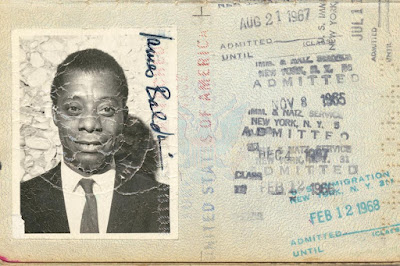 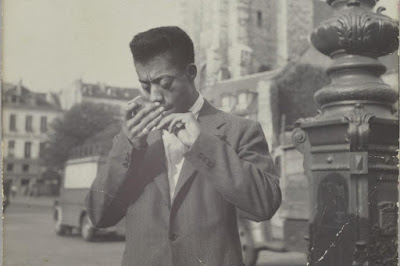 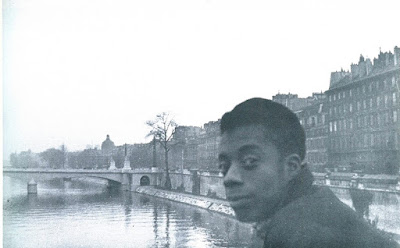 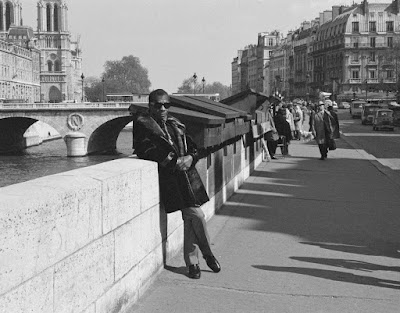 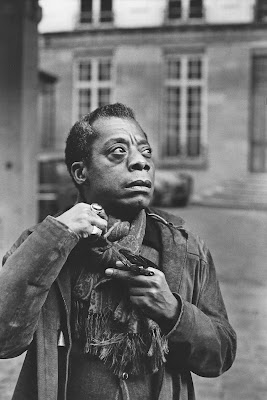 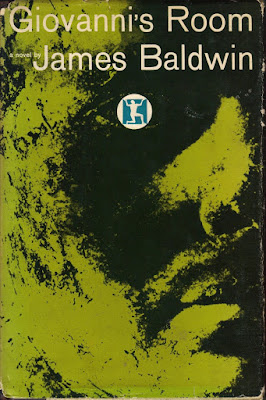 There are so many ways of being despicable it quite makes one’s head spin.  But the way to be really despicable is to be contemptuous of other people’s pain.

A blisteringly angry film, filled with contentious arguments about the supposed focus of the film, with a young white British director clearly out of his element, having his own idea of what he wanted the film to be, but Baldwin, the central figure, was simply resistant, knowing just how naïve this young director was, making this something of an ugly experience, totally confrontational, with Baldwin continually lecturing him on what it means to be black, and the director doesn’t know how to respond, failing to take a cue and adjust, where he simply wanted to put together a beautiful melody and all he was able to obtain was pure jazz dissonance.  Dixon apparently wanted to discuss all of Baldwin’s literary works, melding together his fictional and real worlds, creating a portrait of an artist.  But Baldwin would have none of it, refusing to discuss his writings with a novice, someone he didn’t really know or trust, so the director kept running into a wall of resistance, with Baldwin explaining his righteous anger and indignation for why he left America to come to live in Paris, but the director wasn’t really interested in that, failing to hear the underlying implications in Baldwin’s words.  It’s all reminiscent of a scene from a little-known American film with plenty of subversive undertones, Stuart Rosenberg’s WUSA (1970), the director of the more popular COOL HAND LUKE (1967), both starring Paul Newman, one of the unmentioned paranoid conspiracy films of the 70’s, this one finding Newman working for a right-wing radio station with suspicious implications.  But the scene in question, shot In New Orleans, shows an atypically progressive view of blacks at the time, with Anthony Perkins as a white census taker who’s supposed to count how many blacks are living in segregated black areas, but instead receives a mouthful of distrustful angry black sentiment that was surprising to hear even in those days, as he’s mercilessly teased and ridiculed for being white, ignorant of all things black, knowing nothing about the culture or history, yet he’s sent by the government into “their” neighborhood, arousing everyone’s suspicions, one of the few early films that was actually a discussion on race relations and political hypocrisy.  Perkins, however, remained clueless about the black resentment, and was simply viewed as the odd man out, quite reminiscent of the relationship between this clueless director and his subject, who seems to just be fucking with him.  The director is viewed more as a pompous ass making incorrect assumptions about people, asking leading questions, where he comes across like a know-it-all who knows nothing, having to step out in front of the camera and engage in vociferous debates with Baldwin over the subject matter of the film, unable to penetrate Baldwin’s wall of resistance, where that row, unfortunately, comprises the majority of the film, meeting in front of the Place de la Bastille with some American black students, where things simply fall apart and don’t go according to plans, with Baldwin identifying with the many political prisoners in America, such as the Black Panthers, who were being rounded up and imprisoned or shot by J. Edgar Hoover’s FBI, preceded by the murder of three influential black figures in the 1960’s, Medgar Evers, Malcolm X, and Martin Luther King, all personal friends of Baldwin, while Angela Davis was fired from her job for being a socialist before being arrested on a bogus murder rap, spending more than a year in jail before her acquittal.  Simply put, black people in America were under siege at the time.

While this is a rare document, a time capsule to another era, there are small revelations from Baldwin, but it throws the hammer down on how delusional well-meaning white people are about the black experience.  Even when someone as literate and astute as Baldwin explains things to them, they still don’t understand, as they haven’t lived it.  It’s apparent to all the blacks in the room, but it’s clearly not apparent to the young novice director, who keeps asking for an all-encompassing explanation that makes sense to him, something that never comes, as nothing this man of letters has to say makes sense to him, frustrating him to no end.  His novels make sense, and his personal essays, but the words coming out of his mouth may as well be in a foreign language.  The film, however, is very representative of the times, especially in capturing black anger, when blacks were growing sick of being harassed and targeted, having to continually explain themselves to white listeners who had no shared experiences to relate to other than literature.  In jazz, the music speaks for itself, no words are necessary, though plenty of whites were paid to write jazz reviews or record album liner notes, often emulating the spirit by celebrating a poetic, free-form use of words, much like Jack Kerouac did in On the Road and in his other 1950’s writings.  While jazz is a distinctly American art form originating in black communities, the customers paying to see them perform are largely white audiences.  Similarly, most of Baldwin’s readers are white, yet that remains something outside of his control, as most of his inner circle, or people he trusted most, are black.  During the filming, he preferred hanging out in the Algerian section (openly supportive of the anticolonial movement), with the narrating director oddly describing it as the “Harlem of Paris,” though it’s apparent Baldwin felt more comfortable around black people.  Baldwin’s career is something of a cautionary tale, as well as an inspiration, growing up in Harlem to a mother that was a cleaning woman, the oldest of nine children, raised during the Depression when black unemployment was 50%, never knowing his biological father, yet his stepfather was a Baptist preacher with an unforgiving nature, filled with bitterness from losing work opportunities, eventually driven to insanity.  Terrified of him, surrounded by an unending chaos and fear within his own family, where if being poor wasn’t bad enough, being a black homosexual was like living with a target on his back, making him the subject of merciless homophobic taunts, taking refuge in literature, developing an insatiable appetite, knowing he didn’t want to end up tormented like his stepfather, “sitting at the window, locked up in his terrors.”  With McCarthyism suffocating the political landscape and blacks routinely denied admittance to restaurants and hotels, he decided to leave the country at the age of 24, still unpublished, using the money he earned from a literary fellowship to book a passage to Paris, arriving in November 1948 with just $40 dollars to his name, selling his clothes and his typewriter while not knowing the language.  Following in the footsteps of celebrated performer Josephine Baker, postwar Paris was the refuge for as many as 500 black Americans, including novelist Richard Wright, who was his primary contact, but also plenty of other black artists who felt racism deprived them of freedom, equality, and work opportunities in America, including jazz great Sidney Bechet and painter Beauford Delaney, a longtime Baldwin friend who is seen in the film.

Baldwin has always claimed his primary reason for leaving was to escape the “fury of the color problem,” having experienced racism firsthand, witnessing riots in Harlem and the incendiary anger they provoked (one of his closest friends, activist Eugene Worth, committed suicide by jumping off the George Washington Bridge), Baldwin understood the paralyzing power of hatred and truly believed that escaping American racism literally saved his life and made it possible for him to write, believing otherwise he probably would have been murdered, like other prominent black figures.  Described as the Lost Generation, many white American writers freely traveled to Paris during the postwar 1920’s, like Hemingway, Fitzgerald, and Gertrude Stein, while prominent black artists were denied passports and the freedom to travel, such as W.E. DuBois and Paul Robeson.  Left alone in cheap hotels, while wandering the city streets, Paris allowed Baldwin to explore more acutely his own identity and cultural significance as an exiled black American, publishing his first semi-autobiographical novel Go Tell It On the Mountain in 1953, followed by Giovanni’s Room in 1956 (surprisingly no black characters), while also publishing a collection of essays in 1955 entitled Notes of a Native Son that includes Everybody’s Protest Novel, a 1949 essay that excoriates Richard Wright’s stereotypical portrayal of Bigger Thomas as an angry black man in Native Son, a view that permanently fractured their friendship.  Ironically Wright is buried in Paris while Baldwin is buried in New York with his mother.  In a gathering of students sitting around Baldwin and Beauford Delaney, surrounded by many of Delaney’s brightly colorful, abstract expressionist paintings, Baldwin holds court, reiterating his view that despite so-called progress and democracy in America, it did not prevent the Watts riots of 1965, or the election of Nixon as President, who was turning back the clock on racial progress, accelerating the War in Vietnam, causing others to flee the country as well.  Speaking of white America, he makes a point that is reiterated in Raoul Peck’s 2017 Top Ten List #3 I Am Not Your Negro, claiming “You cannot lynch me and keep me in ghettos without becoming something monstrous yourselves.  And, furthermore, you give me a terrifying advantage.  You never had to look at me.  I had to look at you.  I know more about you than you know about me.  Not everything that is faced can be changed, but nothing can be changed until it is faced.”  Baldwin has an uncanny ability to probe his deepest thoughts and feelings while simultaneously stepping outside of himself and diagnosing the larger world, keenly aware that oppression becomes a cancer within the oppressor as well as the oppressed.  Turning dark and exceedingly pessimistic, even apocalyptic, especially in a religious sense, Baldwin reminds us of the inevitable Armageddon when the wretched of the earth will finally rise in open rebellion against their oppressors.  This kind of talk was popular after reading Frantz Fanon, but it’s largely just talk, where he’s apparently pleasing his audience, telling them what they want to hear.  There is a brief period where the director gets to ask what he wants, where it’s more civil, and Baldwin speaks with eloquence and grace, but rather than exist in utter despair, living under the shadows, Baldwin concludes that there are good and decent people in this world, suggesting “the world is held together, really it is held together by the love and the passion of very few people.”  What we ultimately see around us is reflected back in us, as we could be any of those people we see, capable of being just as monstrous, but we have to make the conscious decision not to be.  That’s what matters most, freedom of choice, and making the right decisions.  That defines who we are.