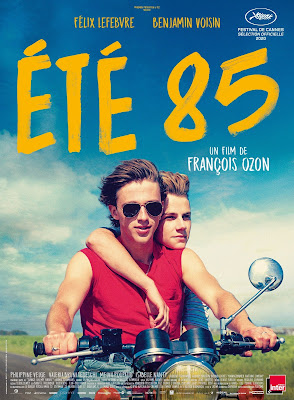 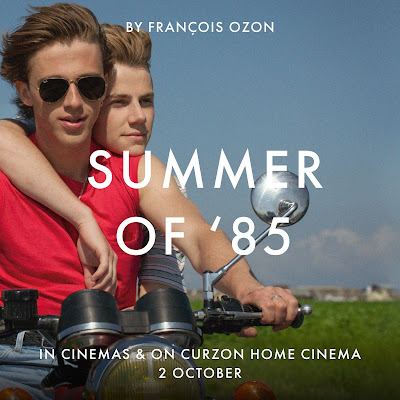 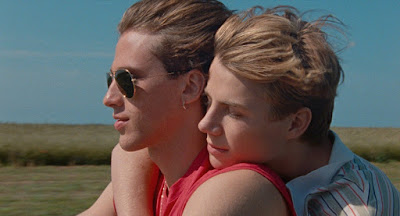 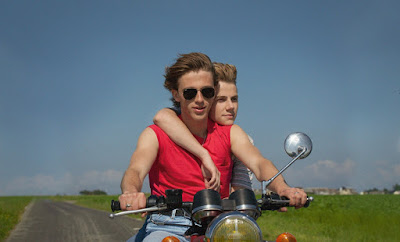 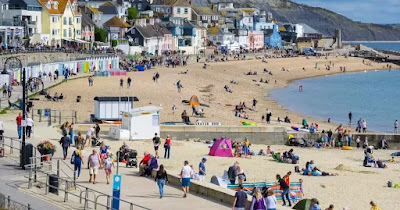 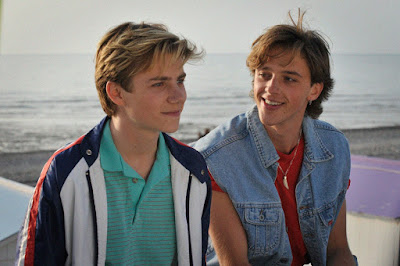 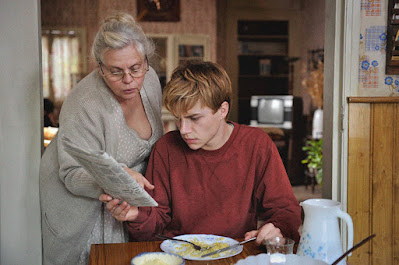 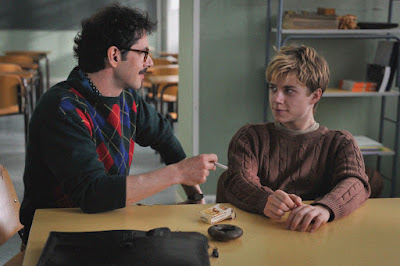 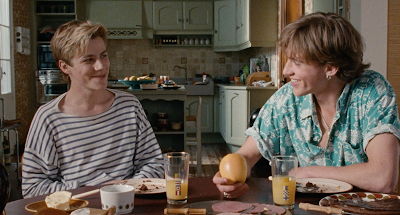 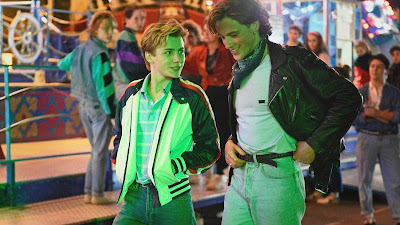 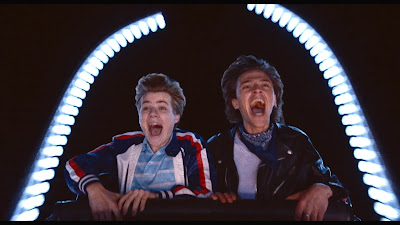 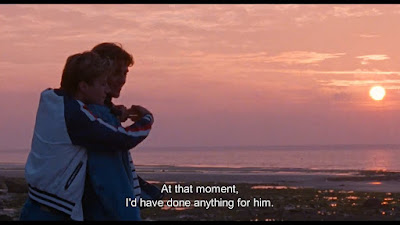 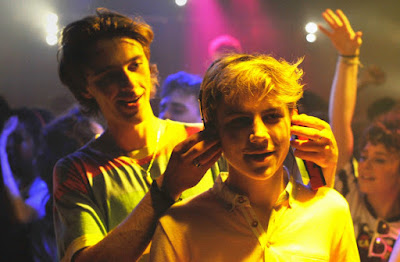 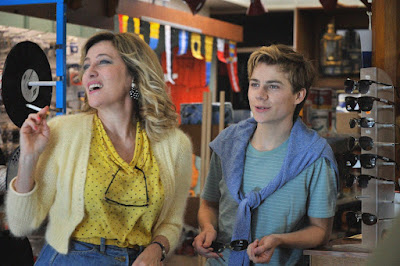 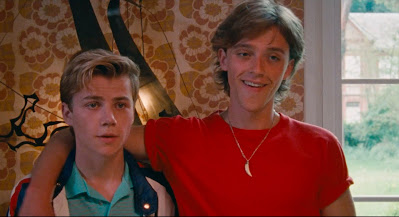 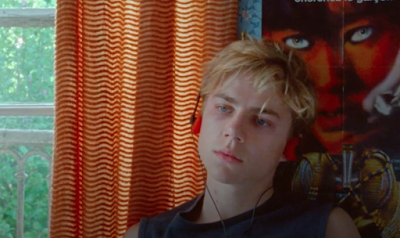 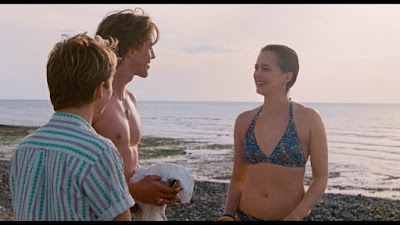 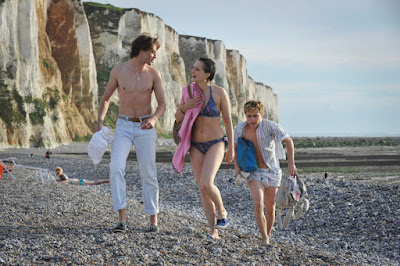 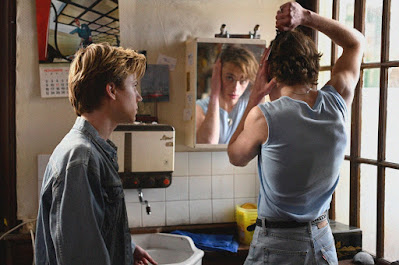 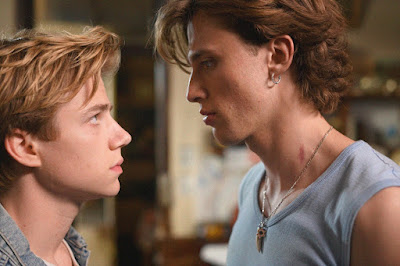 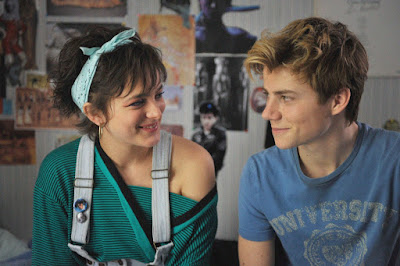 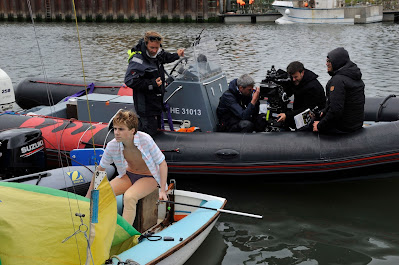 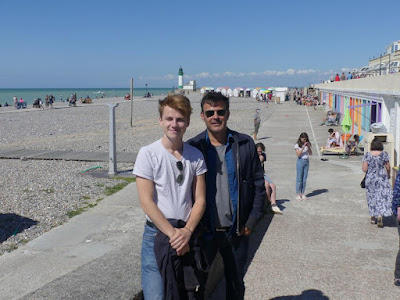 Opening in French cinemas on Bastille Day, a candidate for the best opening credits sequence of the year, a curious confessional accentuated by The Cure’s In Between Days In Between Days (Remastered) YouTube (2:58) exploding onto the scene at an idyllic sunny beachside location on the English Channel in Normandy, but all goes downhill from there, a teen gay love story turning morbid, lacking humor and the devlish wit Ozon is known for, becoming, unfortunately, just another film.  Adapting Aidan Chambers’1982 young adult novel Dance On My Grave, the film was initially going to be called Summer of ’84, but Robert Smith, lead singer of The Cure, refused to grant permission to use his song, as it was actually released in 1985, so Ozon changed the name of his film.  Set in Le Tréport, a picture postcard location surrounded by giant cliffs, 16-year old Alex (Félix Lefebvre) is seen in the opening scene getting arrested, but in voiceover we hear his thoughts, “I must be mad.  I should have known all along if your hobby is death, you must be mad…Don’t take me for a psycho.  Corpses are not my thing.  What interests me is Death, with a capital D…Actually, one corpse had a terrible effect on me.  That’s what I’m telling you about.  If Death doesn’t interest you…if you don’t want to know about what happened to him and me, and how he became a corpse, you’d better stop right there.  This is no story for you.”  Cut to The Cure.  The sun, the colors, the perfectly placed lighthouse, and the extraordinary beauty of the sea offer a Rohmeresque view of the world where people meet and fall in love, often seen frolicking in the ocean, as it’s their summer playtime, beautifully shot on Super 16mm by Hichame Alaouie.  Appropriately enough, Alex borrows a friend’s sailboat and spends a carefree afternoon sunning himself in the breeze, but an instant summer squall changes his fortune, with heavy winds and a lightning storm quickly upon him, desperately trying to rehoist the sails, but the boat capsizes, leaving him in the drink calling for help.  Like the answer to his prayers, David (Benjamin Voisin), just two years older, boldly makes a beeline directly towards him, like the arrival of the cavalry (“He’s the future corpse”), calmly instructing him how to turn the boat over for a tow back to shore, then welcoming him into his home, where his overly affectionate mother (Valeria Bruni-Tedeschi) literally strips him of his wet clothes just minutes after meeting him, favorably inspects the merchandise, then sends him into a hot bath, purring “You’re so cute.  I could eat you up!  My adorable little bunny.”  So far, so good, with everything looking promising, though David and his mother appear to come on a bit strong, but they’re simply exaggerated examples of the French sensibility, both still reeling from the death of her husband, so they’re trying to make the best of a new friendship.  Alex’s parents, in stark contrast, are much more aloof, showing their concern by worrying when he starts coming home late.  Curiously, Ozon was a teenager growing up in this era, a kid similarly drawn to a morbid obsession with death and darkness, so there had to be some personal identification.

In an aside, Alex is reaching an age where he has to choose between continuing school or finding work, counseled by one of his teachers, Mr. Lefèvre (a completely unrecognizable Melvil Poupaud), who admires his writing, demonstrating a flair for originality, wishing he’d continue with his studies.  While his father would like him to come work for him, his mother just wants him to be happy, so he’s at an impasse, with David filling the void, as they go everywhere together, meeting night after night, riding together on his motorbike, where David is a reckless speed demon, becoming a whirlwind romance, otherwise known as a summer fling.  For Alex, however, things not only get heated, but extremely serious, as he’s certain this is the man of his dreams literally walking into his life, where there isn’t anything he wouldn’t do for him, utterly devoted, though also perhaps overly naïve.  When David rescues a drunk off the main street, preventing a sure accident, it doesn’t end there, as he walks him all the way to the safety of the sea, leaving him in an isolated but protected area.  Even after Alex returns home for the night, David spends several more hours “checking up” on this rescued curiosity, suggesting he doesn’t mind playing the field.  While Alex doesn’t quite know what to make of it, more confused than anything, there’s no mention anywhere of AIDS, the deadly scare which captured the headlines of the era, particularly lethal in the gay community, yet they’re right back at it the next night, dancing like there’s no tomorrow in the clubs to a strobe light effect of changing lights, once more ecstatic in each other’s arms, set to the music of Rod Stewart’s “Sailing,” Rod Stewart - Sailing 1975 HQ - YouTube (3:46), where every day is a new adventure.  Simultaneous to this budding love affair, with David already identified as the corpse in the opening segment, the story jumps back and forth in flashback, as the police are conducting an investigation into his death, with Alex high on their lists of suspects, but he refuses to talk to anyone, including a social worker compiling her own report, getting nowhere with him.  The key, supposedly, is to get Alex to work with his teacher Mr. Lefèvre, who is proposing he write his thoughts, as they’re often easier than saying them.  Early in the film Alex meets Kate (Philippine Velge), an Engish student studying in France, cute and overly friendly, speaking expert French.  When they run into her again, she is welcomed into the team, like one of The Three Musketeers, but Alex immediately notices a shift in tone, as everything starts going downhill, with David immediately showering her with affection, leaving Alex the odd man out, feeling not only disrespected, but scorned in love, leaving behind a sour aftertaste.  The two boys get into a jealous dispute afterwards, with Alex steaming out in a huff after being called “boring,” as David has evidently grown tired of him and is ready to move on.  Not long afterwards Alex sees a news report on television identifying David as the crash victim in a serious road accident.

Too much of this film is spent in the tailspin, literally dwelling on the aftereffects of personal anguish and grief, with Alex feeling guilty about his actions, thinking he may have caused the death.  While this may have been the main thrust of the novel, exploring death and all its ramifications, especially from the point of view of a young teen who is still on the verge of becoming an adult, the cinematic effect is morbidly dreary, as Alex alone can’t carry the picture.  David was the more dominant of the two, much more active and spontaneous, partnering with his eccentric mother, both generating most of the energy, with Alex passively commenting upon it through voiceover.  By himself, however, all the air seems to have dissipated, while we’re basically watching a kid feel sorry for himself, going through the Elisabeth Kübler-Ross stages of grief, Elisabeth Kübler-Ross - Fields and Dennis LLP (pdf).  More than anything, it appears, the death allows Alex to explore his own gayness, which also goes through various developmental phases, The Cass Model of Gay/Lesbian Identity Development (pdf), yet what’s worse is his inability to offer the proper respect to David’s mother, who has catastrophically lost her husband and son in short order, which is the film’s biggest tragedy, yet is completely overlooked by his own coming-of-age drama, becoming the film’s biggest deficiency, as it’s essential to offer help and consolation, despite her open objections, blaming him for her son’s death, but it never happens.  Instead Alex continues to think only about himself, which is considerably less interesting, becoming something of a farce, with Alex needing to see the body, as he was never able to pay his last respects, concocting a harebrained scheme with Kate to appear at the morgue in drag, assuming the role of a woman, donning a wig, shaving his legs, thinking that would make the staff more sympathetic, but his deplorable behavior is stunning, perhaps meant as dark and morbid humor, as it appears right out of a Monty Python skit, where one could imagine John Cleese jumping on a naked corpse with a flurry of kisses, representing the epitome of bad taste.  Afterwards, Alex is seen riding through town on his bicycle in drag, arriving home with a dress in tatters, much to the shock of his mother, claiming it immediately reminded her of Uncle Jackie, someone in the family no one talks about, who her husband abhors.  Alex, of course, immediately takes an interest in Uncle Jackie.  This weaving in and out of his own budding sexual identity is continually overshadowed by the tragic death of his friend, feeling somehow less important, as Alex is simply too bland a character, unable to generate any real screen enthusiasm.  Yet the fact remains that’s the storyline, assisted admirably by Kate, who remains upbeat and supportive throughout, his only real friend, eventually confessing everything to her, as the floodgates suddenly open through his writing, becoming the story we are witnessing.  Ozon has always had a flair for originality and invention, and this suffers from a lack of his own original material, feeling bogged down by someone else’s limitations, where standing in stark contrast is In the House (Dans La Maison) (2012), a student writing exercise that blossoms into a ridiculously innovative film, with readers, in this case his disinterested, bourgeois English teacher and wife, devouring every page, craving more, literally inhabiting each new page of the developing story.