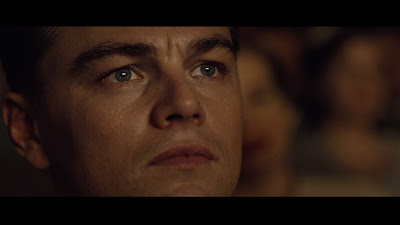 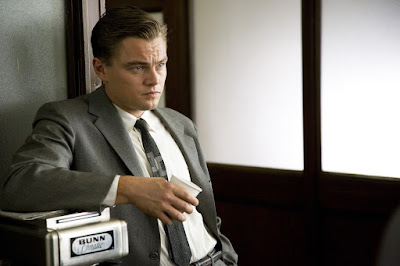 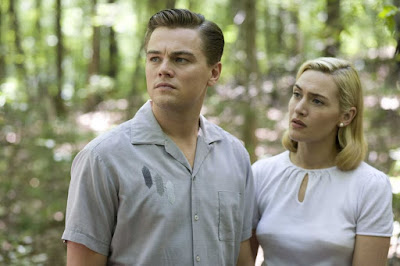 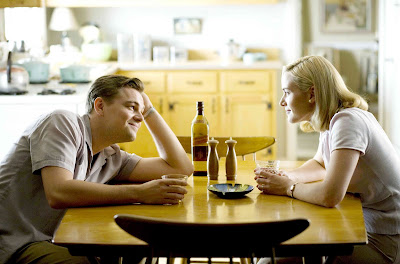 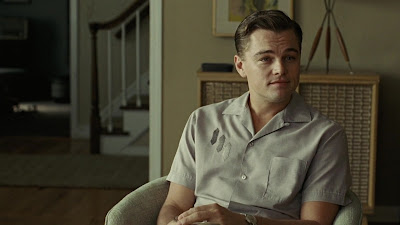 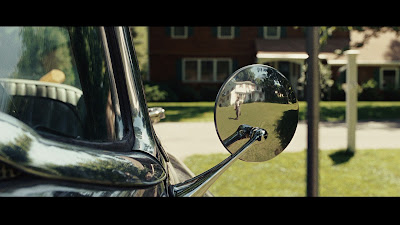 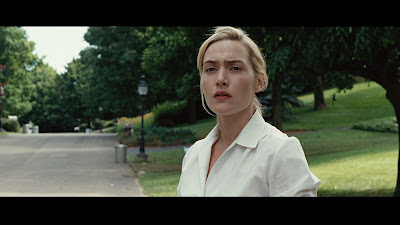 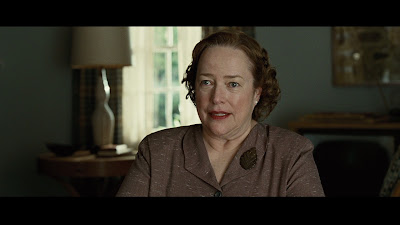 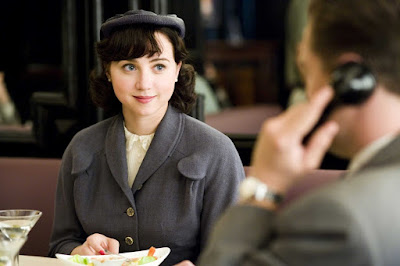 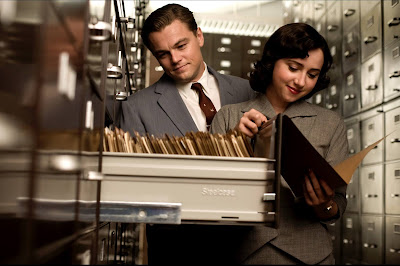 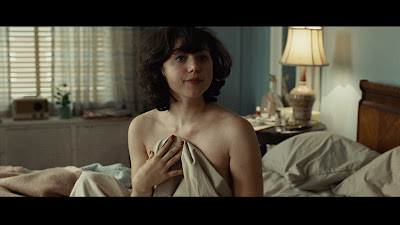 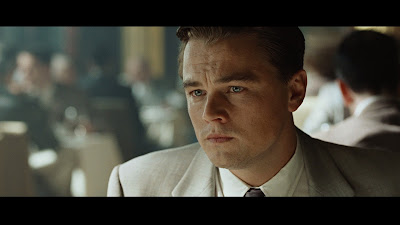 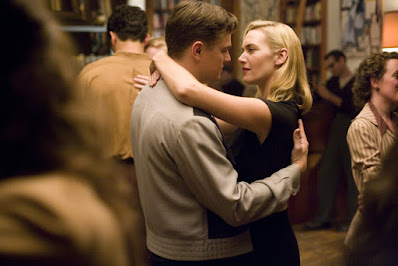 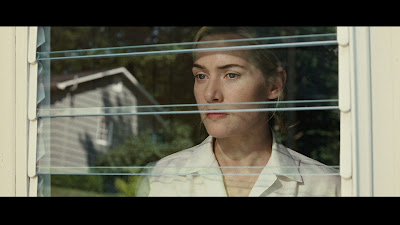 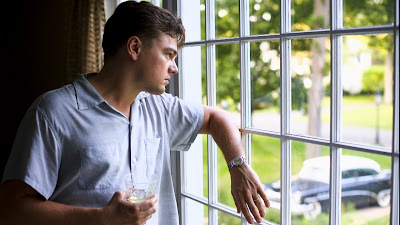 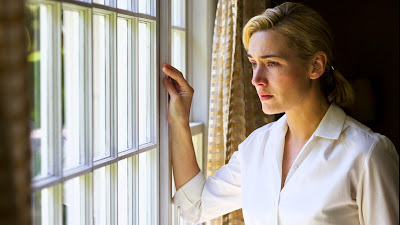 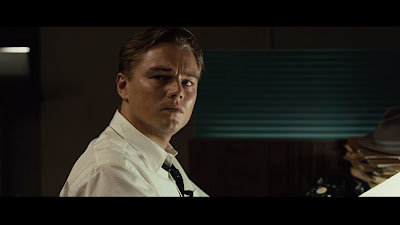 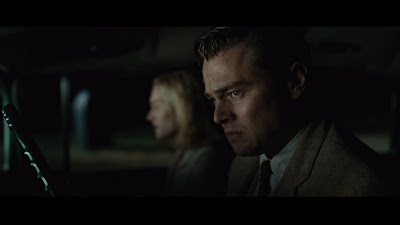 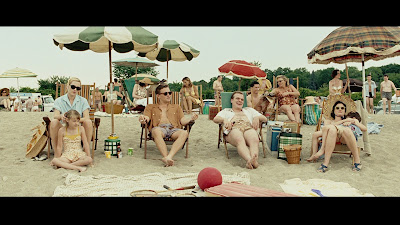 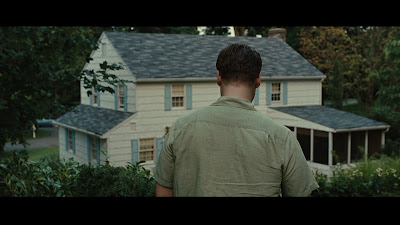 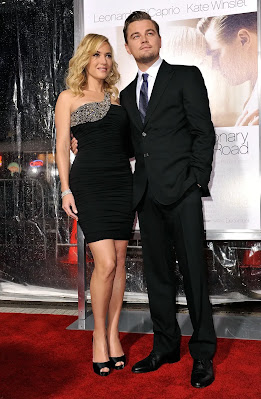 Another one of those incendiary emotional dramas about doomed lovers, fractured American Dreams, and a marriage on the rocks with plenty of unleashed fireworks, where the real drama is what’s left unsaid in the empty spaces between people that over time all but consumes them, perhaps sealing their fates.  Adapted by Justin Haythe from the infuriatingly personal 1961 Richard Yates novel, this examines the flight to the suburbs in the 1950’s supposedly to lead idyllic lives that never materialize, and how some people are simply disappointed to lead sad, meaningless lives, while others are crushed by it.  What’s truly unique about this film is not only the amount of screen time between the two extraordinary leads, Leonardo DiCaprio (perfectly cast for his naiveté, but no match for Winslet) and Kate Winslet as Frank and April Wheeler, but how the perfect couple (“You’re the Wheelers!”) in their perfect little suburban home come to resemble Ibsen’s Doll House, where Winslet, with the internal force of a hurricane, is truly trapped living a life with a man she comes to loath and despise with so few options available to her.  In hindsight, one might project possibilities that simply didn’t exist yet, instead she was forced to suffer and endure her stiflingly empty existence, made all the more uncomfortable by a husband who was clueless that his own demeaning behavior was the source of her unhappiness, leaving her feeling trapped with no way out.  What’s also interesting here is how few shots include the children, and how their home barely even acknowledges their existence.  This accentuates the self-centered ambitions of the adults, particularly the man, who’s overly defensive and quick to point out things are never his fault, while she believes the only hope is getting the hell out, moving elsewhere, anywhere, suggesting Paris, as that’s the last place her husband felt really happy.  As fate would have it, her husband was given a good sales pitch that he couldn’t refuse, where money induces him into believing he is getting what he wants, while she’s left to fall on the tip of her own sword and expunge any last vestiges of hope.  The last act of the film feels like a horror movie, especially the transition from their worst blow up to an eerily haunting breakfast scene that looks like something out of THE STEPFORD WIVES (1975), as we’re simply waiting in the end to see what tragedy will bring down the final curtain.

What’s interesting is from the outset, no one tells the truth, as they all seem to be fooling themselves living under a cloud of self delusion.  Early on, we see potholes along the way, as Frank crudely responds to the poor reception an off Broadway play receives in Greenwich Village with his wife as the lead, deciding inappropriately that this is a moment to have a heart to heart talk, which seems more like bullying and taking advantage of her when she’s vulnerable and feeling low.  But she stands up to him in a way only Winslet can, leaving her husband feeling more than a little inadequate.  Next thing you know his inadequacy is replaced by a dream house in Connecticut.  This typifies the problems in their relationship, as he has a built in system of rewards just for himself, which includes an after hours affair, the ability to climb up a career ladder, and the aggravating habit of having the final word on any given subject, including their lives.  He’s also seen as a typically immature male who’s so caught up in himself that he can’t even conceive what she’s going through, a guy who always demands that they see things his way and when she refuses, it leads to acrimony, where he even threatens to call in the shrink, believing she must be crazy not to adhere to his views.  Such is the male-centric world of America in the 1950’s.  There are flashback sequences to their earlier, happier days, where there’s an interesting use of 50’s doo wop songs that shine a light on Winslet’s sensuality, but in no time, their intimacy has been replaced by a mundane life, a dreary job that Frank can’t stand, and an over-indulgence in cigarettes and martini’s and dreams of a better day.  And when Frank pulls the rug out from under her on that score, never really taking the idea of moving to Paris seriously, she feels betrayed, knowing he’s incapable of ever taking her seriously again.  In terms of dramatic fireworks, it’s the film that sets the table for Noah Baumbach’s more recent 2019 Top Ten List #3 Marriage Story.

Kate Winslet is brilliant, as she never resorts to largesse or the Sean Penn style of overdramatized histrionics, but always reels her emotions in, providing a much more naturalistic fit to whatever story she’s in.  She never becomes a character through mimicry, by imitating or duplicating the behavior of others, instead she invents an original person in every single role.  She has an exquisite dance sequence that’s unlike anything we’ve ever seen in her career, Revolutionary Road (2008) | dance scene YouTube (1:15), much of it due to the stylish manner in which it is filmed (by her husband), but her commitment to that character who is simply fed up with the world around her is overwhelming.  And that look on her face as she’s being verbally assaulted by her husband is a thing of beauty, as without a word she couldn’t possibly portray greater strength than that look when she’s staring him right between the eyes.  Frank, as usual, gets the final word, but it’s a lie cruelly designed to demoralize and humiliate her in pure domineering fashion.  But it’s not all gloom and doom.  The unmistakable presence of Michael Shannon as the realtor’s son recently released from a psychiatric ward adds both a humorous change of pace but also a devastating tone of unvarnished, no holds barred truth, the kind that feels like surgically precise, heat seeking missiles shot from a gatling gun as this guy lets them have it and what he has to say is at the very core of the film.  The question is can they handle the truth?  By the end, we may be asking ourselves the same question.  Though it’s an overly somber affair, seen through modern eyes this is an extremely well written film that resembles the acerbic dialogue and cruel power games of Who's Afraid of Virginia Woolf? (1966), which itself was a daring display of acting on the highest order.  Hopefully this may motivate many viewers to rediscover the writing of Richard Yates, as this is a towering work that doesn’t fully come alive onscreen, but its lacerating portrait of middle class despair is completely on target.

After having read the book:

The book very much resembles the movie, almost exactly, though they each offer their own unique emphasis, as the book emphasizes the constant attention and affirmation demanded by the husband while the movie broadens and intensifies the interior world of the wife.  In the movie, the ending is inevitable, while in the book, the ending is a shock, even in its concise description, as most of the book meticulously details Frank’s perspective, as the world continually revolves around him.  Though short, the book is extremely dense, offering considerable psychological background for every character mentioned, even the minor roles.  Painting a contradictory yet lacerating portrait of the idealized marriage, seemingly the perfect couple to all outsiders, living in their wonderful house in the suburbs, the marriage of Frank and April Wheeler is really deteriorating inside right from the outset when they fly off into one of their many George and Martha Who's Afraid of Virginia Woolf? (1966) tirades, which in every single instance features a more insecure man browbeating his more emotionally mature wife.  Frank is perfectly played by Leonard DiCaprio, a guy who’s always a little full of himself, but utterly naïve about the consequences of his own decisions, always blaming his own catastrophes on others.  Outside of What’s Eating Gilbert Grape (1993), and perhaps an underrated Spielberg sleeper, Catch Me If You Can (2002), it’s hard to see him in a role that matters, as he’s always too full of his own self-importance.  But that’s exactly the character of Frank Wheeler, a hard drinking computer salesman who thinks he’s smarter than the rest and proves it by doing as little as possible while pulling a paycheck, all the while convincing others, including his wife, that he’s hard at work.  She, on the other hand, has sacrificed whatever artistic possibilities exist in her life to raise their two children, both of whom are barely mentioned in either the movie or book, almost as if they are an afterthought.