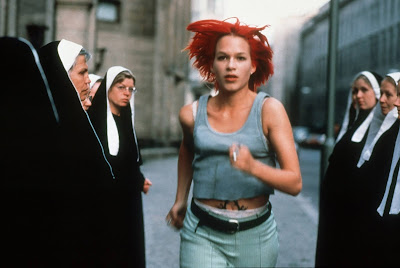 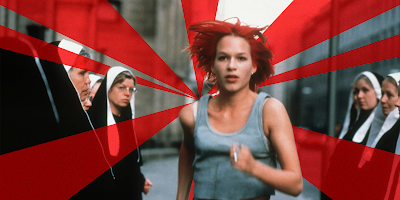 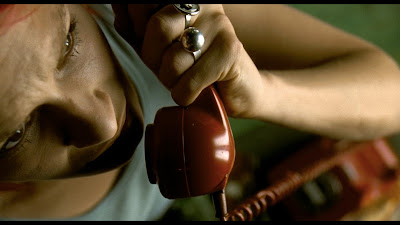 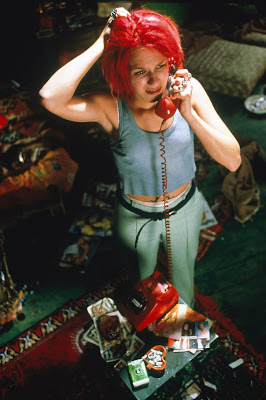 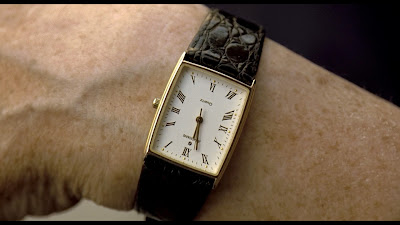 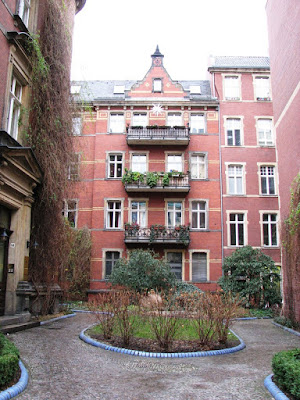 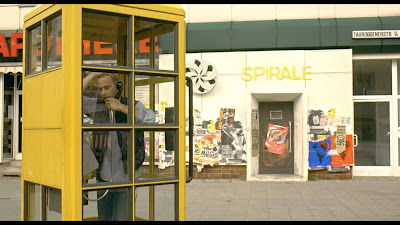 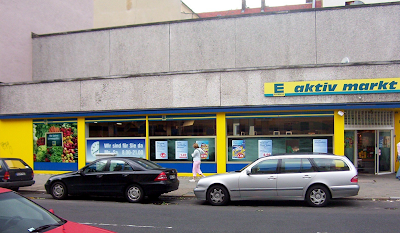 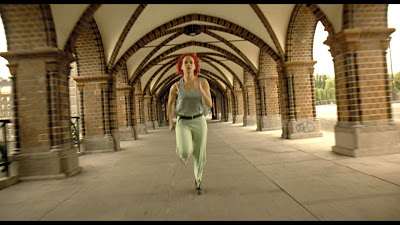 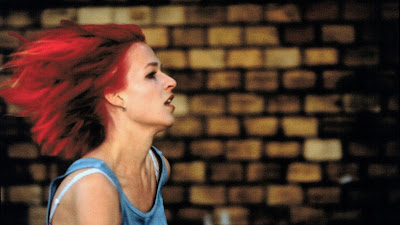 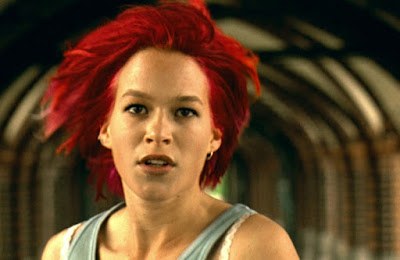 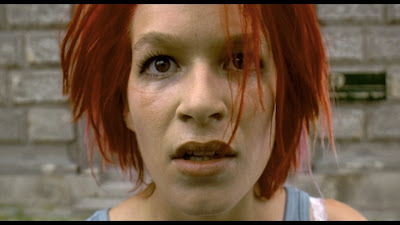 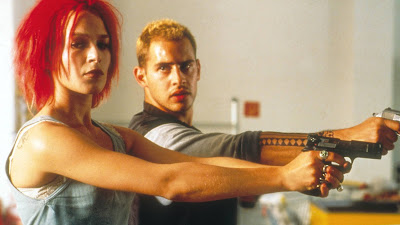 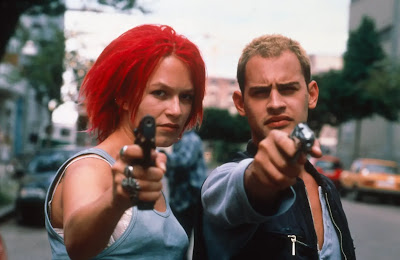 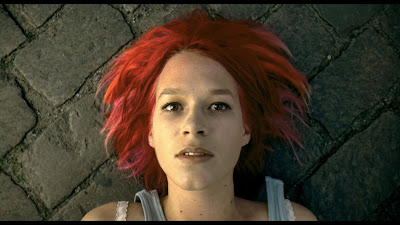 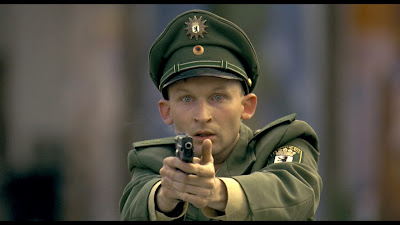 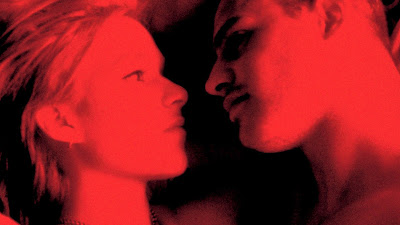 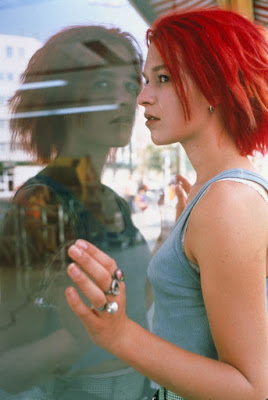 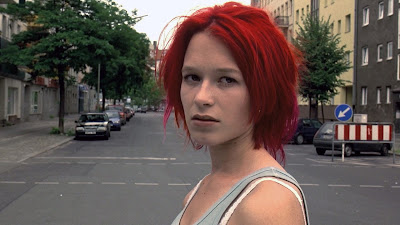 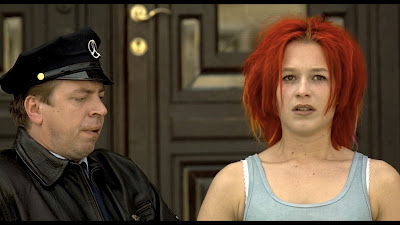 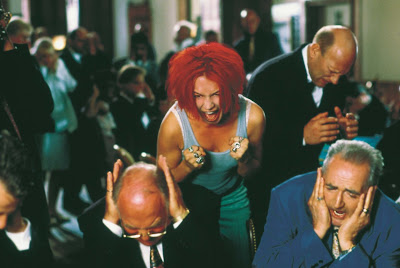 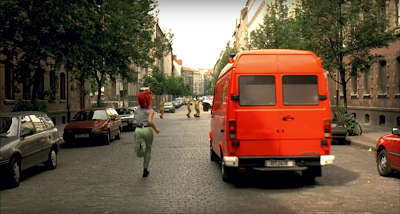 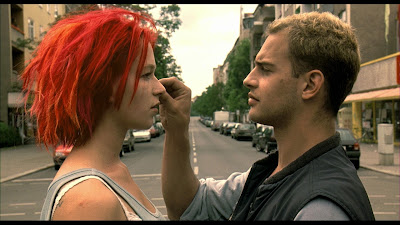 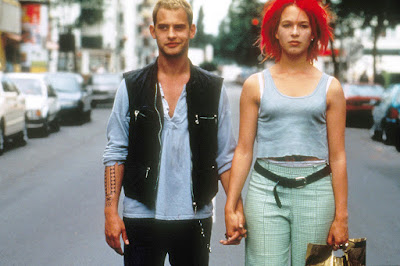 A heavily stylized film that re-established Germany’s prominence in the world market, as this wildly innovative little film quickly took the world by storm.  For the Fast and Furious crowd, where the adrenaline-laced action is why some people go to the movies, like riding a roller coaster, needing that thrill of exhilaration.  While this was actually Tykwer’s second film, the overwhelming international popularity led to a quick release of the first film nobody saw, Winter Sleepers (Winterschläfer) (1997), which is shockingly even better.  Tykwer breaks ranks with the previous generation of German directors (Wenders, Schlöndorff, Herzog, Fassbinder) by embracing popular culture and using the medium to enthrall audiences, where entertainment becomes a primary focus instead of confronting the nation’s repressed historical past.  The film places itself in contemporary times, using recognizable Berlin locations, but indulges in a pop culture style, creating a media blitz of MTV music video imagery, merging various artforms, like westerns, film noir, slapstick, comic books, and hyper-editing techniques, to create a groundbreaking technique that at the time felt liberating, though much of this pushes viewers into the realm of fantasy.  Berlin at the time was confronting a new millennium and a growing clamor for globalization, yet the urban setting lends itself to fast-paced editing, much like the French New Wave, with Tykwer combining Hollywood pizzazz with the visual complexity of a European art film.  An intense race against the clock, the film plays out several times over, resetting like a video game, allowing you another chance at a different outcome, using a frenetic editing style that overpowers with its dazzling aesthetic of jump cuts, still photo montages, time-lapse effects, animated cartoon sequences, whip pans, and innovative handheld camera techniques from Frank Griebe, mixing film with video, black and white with color, all driven by a throbbing techno score written by Reinhold Heil, Johnny Klimek, and the director himself, with spacy lyrics sung by the composers and lead character that have a transcendent quality, as if coming from beyond, resembling the Angelo Badalamenti primal dreamscapes from David Lynch.  Front and center is Lola (Franka Potente), a flaming red-head in a tank top and lime-green baggy pants, with the slight presence of visible tattoos, receiving a frantic call from her boyfriend Manni (Moritz Bleibtreu), having just lost 100,000 German Deutschmarks on the subway, dirty money from a smuggling operation that he needs to deliver to his homicidal crime boss in just twenty minutes, certain his boss will kill him for losing his money.  With an introductory narration by Hans Paetsch, the “uncle of German fairy tales,” a notorious voice on fairy tale recordings in Germany, each of three different sequences begins exactly the same way, but they have slight variations that reveal an inventiveness of the storytelling, all wrapped up in a playful package that is deliriously entertaining.

While the structure of the movie resembles the playing of a game, this is a film that thrives on repetition, constant movement, and spontaneity, capturing the immediacy of the moment, which appears subject to randomness and chance, as a different decision here and there leads to substantially different outcomes.  This film revels in those slight variations, adding a morbidly weird sense of humor, where the one constant in each sequence is the camera following Lola in full flight as she races down the street, quickly rounding corners, and occasionally bumping into someone.  As an aside, the film stops in its tracks and imagines that accidental bystander’s flash-forwarded future, often comically portrayed in an unforeseen accident, much like Wile E. Coyote in the Road Runner cartoons, where the writer/director seems to toy with these possibilities, subjecting his characters to all manner of horrible outcomes, all determined purely by chance.  This narrative insert constantly changes in each new sequence, like a new chapter with seemingly endless possibilities, a visual kaleidoscope often unhinged from reality, just one of the many quirks jam-packed into a skeletal narrative, offering a feeling of time passing in real time.  One of the keys to maintaining the frantic pace in such a precisely imagined adrenal rush of a movie is remaining short and concise, allowing nothing extra.  At 80-minutes this is an extremely compact movie, actually running at a brief 71-minutes if you discount the credit sequences, where the average shot is a mere 2.7 seconds.  In each sequence Lola’s start is down a spiral staircase in her apartment building, turning into an animated sequence of a red-headed female cartoon figure who smashes all the obstacles in her path, portraying an aggressively tough action figure, which transforms into Lola who also overcomes obstacles, many of which are surprising, even death-defying, yet she perseveres, running past the exact same city blocks, encountering the same pedestrians, including a group of nuns, or several men carefully crossing the street carrying a large panel of glass which is crushed and obliterated by an ambulance that can’t stop in time, or a crane shot from above that reveals her approach to an intersection that coincides with a passing commuter train on an elevated track, so viewers should expect the unexpected, and then still be surprised.  While not much is ever revealed about Manni, Lola is a modern age heartthrob, willing to go the extra mile for Manni, beyond even what might be anticipated, driven by her love for Manni, who she refuses to let down, where there’s a sweet scene of them together in a close-up shot from above using a red-filter, speaking earnestly to one another, each professing their love, yet Lola questions how he knows she’s the one, while she goes to great lengths expressing her own undying love.  This brief romantic interlude makes all the difference in the world, adding an element of hope and eternal optimism that never fades, which is the endearing quality of the film.

While Lola’s unabashed freedom allows her to not just inhabit but take over the city space, defying logic and the laws of nature, where she’s perfectly capable of just about anything, and demonstrates that repeatedly, with results that might amaze even the most cynical viewer, making her a remarkably compelling action figure, while Manni, after screwing up on the subway, remains stationary, trapped and imprisoned in an obscure phone booth, completely out of options (whose real-life mother, Monica Bleibtreu, plays the blind woman waiting just outside the booth), totally dependent upon Lola to save and rescue him.  He never sees what the rest of us see, remaining blind to the unremitting effort, the unstoppable force, and the overwhelming chances she takes to save him.  There’s a curiously developing side story about the homeless man on the train (Joachim Król) who finds the bag of money, where there are dreams of paradise, yet he remains that same homeless man, still facing his own inner demons that led him to the street, an outsider that somehow doesn’t fit.  One of the central threads of each sequence is Lola running to the bank where her father (Herbert Knaup) works as the head manager, hidden inside a security protected interior, where he’s involved in his own unraveling melodrama bordering on a soap opera and has little time or interest in her, always ending up an extreme disappointment, which may have something to say about the reliability of earlier generations, viewed with skepticism and extreme disappointment by the younger generation.  The same can’t be said for earlier generations of filmmakers, as Tykwer pays homage to Hitchcock’s Vertigo (1958) in several scenes, including the introductory spiral staircase that jump starts each sequence, while another takes place in a lengthy casino sequence with gaming tables and a roulette wheel, which figures prominently in one of the sequences, but on the back wall behind the wheel is a painting of the back of Kim Novak’s head, among the more infamous shots of the film.  To those who scrutinize these things, Tykwer made sure in the final sequence that Lola crosses the space that was once separated by the Berlin Wall, separating East and West, representing a transcendent crossing connecting the past to the present, setting up Lola’s chances for a positive future.  The city of Berlin remains a silent, imposing character throughout, a city under construction that must look to the future by reinventing itself.  The confident image of Lola running in stride is a remarkable symbol, resolute and unwavering, never gazing back, reflecting a mercurial figure who may come to represent a new contemporary German spirit, certainly one that Fassbinder would never have envisioned, but at this point in time one could look into the mirror and say this is who we are, ironically resorting to fairy tales to construct an elaborate labyrinthian journey spun from the web of the imagination, but this relentless effort breaks open the door to new possibilities.