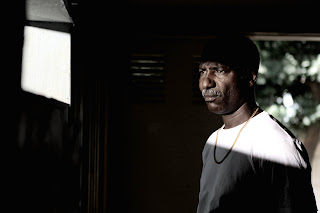 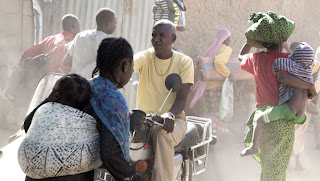 Beware of assuming the sterile attitude of a spectator,
for life is not a spectacle,
a sea of miseries is not a proscenium,
a screaming man is not a dancing bear….

—Aimé Césaire from Return to My Native Land, 1939

All of Haroun’s films touch on father and son relationships and the traumatic repercussions of war, his last three forming what amounts to a War Trilogy, showing children who are abandoned by their fathers in ABOUNA (2002) to a child seeking his dead father’s revenge in Daratt (Dry Season) (2006), which features an adult father figure (his father’s alleged killer) who is a shell of his former self, haunted and scarred by his role in war and by what he’s been forced to witness.  Africa is a continent that knows continual strife from the everpresent eruptions of violent and bloody civil wars, where Chad itself has had 4 different Civil Wars in the past 40 years and is linked to the ongoing conflict in Darfur, where the worst African scenario usually involves the conscription of young children who are kidnapped by warlords or local militias and sent off to the front, usually hopped up on drugs carrying AK-47 assault rifles, oftentimes never seeing their families again, whose villages may have been burned during the many massacres.  One of the more controversial books written on the subject centers on the fighting in Sierre Leone, written by a child soldier who was abducted at age 13 and is called A Long Way Gone:  Memoirs of a Boy Soldier, by Ishmael Beah, though many have questioned the historical accuracy of his recollections.  Haroun, on the other hand, never provides the specifics of these bloody events, relying on the viewer’s familiarity with African atrocities, but instead is more interested in the psychological ramifications of the survivors.  Both A SCREAMING MAN and Daratt (Dry Season) were shot in Chad during times of actual warfare, where the actual conditions bring a sense of authenticity to the shooting.

From the cheerful opening scene in a hotel swimming pool, the brightness of the clear blue pool water contrasts heavily against the final somber images of the film, where a peaceful river flows into the dark of night.  Youssouf Djaoro as Adam is the centerpiece of the film, a quiet, mild-mannered father whose relaxed face describes his even temperament.  He’s a former Central Africa swimming champion, known around the grounds as “Champ,” who works at the pool with his son Abdel (Diouc Koma), teaching kids how to swim or leading pool exercises, while also keeping the grounds clean.  In his eyes, after twenty years the pool is his life, but due to privatization, a Chinese takeover of the hotel leads to cuts, where Adam at age 55 is considered too old and loses his pool job to his son, and is instead transferred to the humiliating position of gatekeeper, manually raising and lowering a wooden gate leading to the hotel entrance, forced to wear an ill fitting suit and endure the aggressive honks of hurried drivers all day.  But he’s also internally resentful that his son has taken over his prized position, showing not even the slightest remorse for this travesty.

Listening to the radio is another common Haroun theme, where a grandfather and his grandson listen to the Truth Committee Investigation hearings in Daratt (Dry Season), where war murderers were offered amnesty, and here Adam listens to the daily reports of rebel forces attacking cities across the country but being repelled by the Army, where TV reports show shots of rebel children killed laying dead in the streets.  Local authorities demand money from families for the “war effort,” but as few have any money to offer, the Army takes their able bodied sons instead.  Adam doesn’t raise a hand in protest when they basically kidnap his son and send him off to the front.  Despite reclaiming his former position at the pool, he is wracked with guilt, but rather than cry out and scream, he suffers in silence while devastated by the news reports of escalating violence, while the continual sounds of helicopters flying overhead drown out the natural street sounds.  When Abdel’s pregnant girlfriend shows up, Djénéba Koné, who comes from a family of artists, she stays in Abdel’s room and can occasionally be heard singing softly.

The entire tone of the film shifts from daylight to darkness, as the bright African colors so pronounced in the sunlight are drowned out by the darkness, turning this into a mournfully sad film, where in a haunting image Adam drives his motorcycle down a narrow alley engulfed in darkness, as his headlights become smaller and smaller before disappearing in the total blackness of the night.  Djénéba receives an audio tape from Abdel that describes a living hell around him where friends are quickly dying around him, where reports of rebels advancing is followed by a swarm of people exiting the city in a mass exodus, where chaos reigns even as the police are making unheeded loudspeaker announcements that everything is under control.  In what is perhaps Haroun’s final offering in his War Trilogy, the overriding theme is that “”war is perpetuated by man…war is a history, knowledge and experience that is handed down from father to son.”  Adam’s emotional devastation leads him to question the presence of God, where his scream is not so much against the war and its ravaging effects but against the silence of God.  The film is poetic and restrained, highly personal, quiet, transcendent, and beautifully understated, gorgeously shot almost entirely outdoors on location in ‘Scope by Laurent Brunet (who also shot two recent Christophe Honoré films), and has a transfixing finale, an offering of quiet peace against an unending assault of perpetual violence.
Posted by Robert Kennedy at 1:37 PM