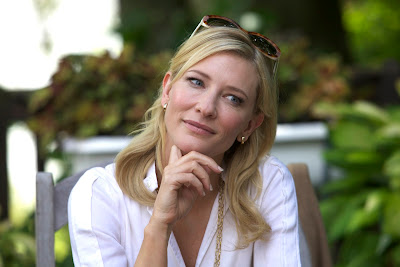 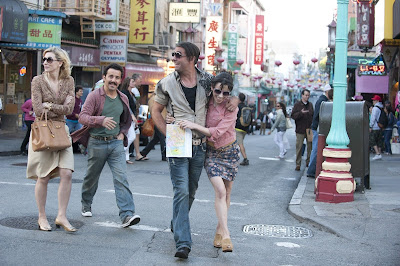 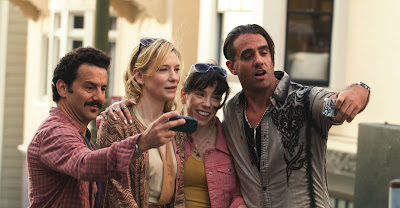 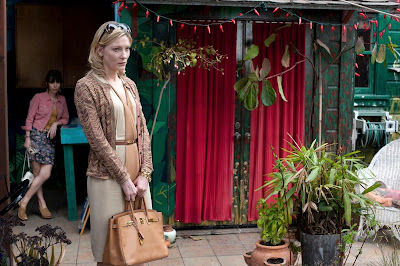 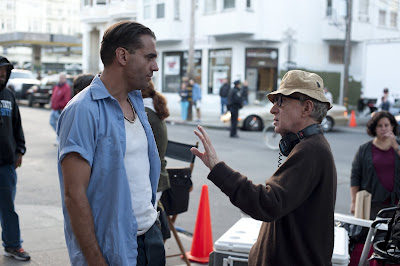 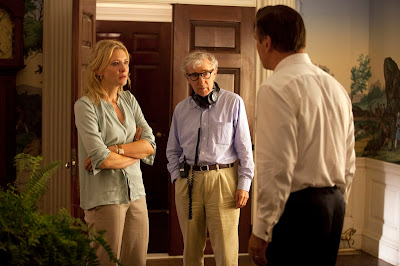 
After an 8-year sabbatical making movies overseas, Woody Allen finally returns to America like he’s found the promised land, writing his most entertaining and dramatically rich screenplay since the 1980’s when he was working with Mia Farrow, doing a constantly inventive and theatrically invigorating variation on Tennessee Williams, in particular his 1948 Pulitzer Prize-winning play Streetcar Named Desire, featuring an exceptional international cast led by Australian actress Cate Blanchett as Jasmine, who is something of a nuclear force operating on another wavelength from all other Allen actresses, doing a modern riff on Blanche DuBois, a younger version of the delusional, perpetually fragile woman who has fallen from grace, but has yet to realize the staggering enormity of the abyss she’s fallen into.  Written with Blanchett in mind, she is onscreen for nearly every shot of the film, showing a range of emotion that hasn’t been seen in a Woody Allen film in over thirty years, perhaps ever.  While this is clearly an Allen film, it’s also something of a departure for him writing such an intensely dramatic role, easily one of the best in his lengthy career, where Blanchett seems born to play the part, not seen having this much fun since NOTES ON A SCANDAL (2006).  While she’s not as prominently featured, equally enthralling is British actress Sally Hawkins as Ginger, last seen performing against type in Submarine (2010), playing the sister role of Stella Kowalski, a more earthy, warmhearted and working class woman who must contend with physical brutes for men, brilliantly played by Brooklyn-born Andrew Dice Clay (who hasn’t been in a movie in 12 years) as Augie, her first husband, and later Jersey-born Bobby Cannavale as Chili, her fiancé, two physically imposing Stanley Kowalski characters, working stiffs whose foul mouths and quick tempers have a tendency to “lose it” from time to time, while also seen trying to sweet talk their way back into good standing.  What’s surprising is the effectiveness of flashback sequences, where half the film takes place in the past when Jasmine was a wealthy Upper East Side socialite married to Hal, Alec Baldwin, a Wall Street investor whose financially fraudulent business practices eventually lead him to the slammer, but not before he steals every last dime and nickel from all his investors, leaving Jasmine embarrassed and without a penny to her name, sadly moving across the country where she hopes to make a new start in San Francisco with her more commonplace sister.


The culture shock of living in an ordinary environment leaves Jasmine horrified, depleted of her reason for living, which appears to be a concept of worth based upon the accumulated reserve of unlimited funds to spend, where she instead regularly pops Xanax as if it were candy out of a bottle while slurping down Stoli vodka martinis with a lemon twist, leaving her in a distorted state of mental deterioration.  Despite her dire economic situation, Jasmine continues to pass herself off as upper class royalty, where it’s simply inconceivable for her to alter her lavish lifestyle, continually criticizing her sister for settling on Neanderthal brutes that only reflect upon her low self-esteem, while the two men in Ginger’s life never let Jasmine forget how her conniving thief of a husband stole all their money along with everybody elses, making him the most wretchedly despicable man on the planet.  But Jasmine is not deterred, completely incapable of sympathizing with the working class or their real world problems, consumed instead with her own worries, wondering what has a woman got to do to escape the doldrums of mediocrity, where she believes all it takes is the need to think big, bigger than the vacuous trap that defines Ginger’s life, working at a grocery store, taking care of two kids, and never having a moment for herself (or her sister) anymore.  Since Jasmine’s life has been a gluttony of hedonism, where every waking moment has been spent indulging in life’s pleasures, including a husband that bought her every extravagant gift and luxury item she could ever hope for, perhaps this made it easier for her to look the other way when her philandering husband was sleeping around with every attractive woman he set eyes upon, where both felt it was their God-given right to have whatever they wanted in life.  And for awhile, they were riding high among the social elite, written about in the celebrity tabloids as an up and coming power couple, holding extravagant parties where important people show up, as if this validates their very existence.  But now, of course, she’s lost everything, having to accept criticism from the morons in Ginger’s life that literally make her cringe, finding their crudeness to be revolting, believing their lack of sophistication and refinement will only prevent Ginger from ever wanting more out of life, as she’s settling for these hopelessly undistinguished losers.

Jasmine’s plans for the future, of course, make little sense, as she has no work qualifications whatsoever other than the ability to assemble an overpriced luxury wardrobe that distinguishes her from those in more practical attire.  Her sheer incompetence in learning necessary work skills sets her apart from Ginger’s efficient reliability, someone who’s gotten two kids to school and can still show up for work on time.  Jasmine, on the other hand, is literally overwhelmed by anything having to do with work, needing pills and yet another cocktail to help alleviate all the tension she feels.  Jasmine would have us believe that it’s not easy being rich, where you have to cater to all the whims of eccentric personalities in people who have never been told no, who are used to getting what they want, where it’s impossible to please everybody, while at the same time having to organize tiresome fundraisers for the poor, where extending a helping hand to others is fraught with difficulties and unending pressures.  In Jasmine’s world, life is a neverending theatrical performance, where it’s all about style and flair, where ordinary concerns never even enter into the picture, where the working stiffs in Ginger’s life are exactly what’s wrong with the world, men who have no ambition or dreams, who think too small, continually toiling in a dead-end job working for others, where they’re constantly being told what to do, so they spend their own lives ordering others around like the narrow-minded bigots and tyrants that they become.  Allen creates an excoriating picture of the aristocratic mindset, especially when Jasmine and Hal are flush with money and find it so burdensome to stop thinking about themselves for a single moment and have to put up with out of town visitors like Ginger and Augie who are so out of place in “their world” that they may as well be from another planet, like the world of the mundane.  What is initially such a hilarious portrait of polar opposites grows deathly serious by the end, becoming one of the darkest works Allen has ever written, a devastating portrait of a dream deferred, where the unbridled lust and grandiose ambition of the great American Dream has lost its luster, becoming a pathetic picture of lost and fragmented memories of an already forgotten era, where the rich are portrayed as manipulating and conniving thieves, while the poor and middle class are stuck with working off their accumulated debt, stuck in an endless quagmire not of their own choosing where they live the lives of indentured servants, like bought and sold commodities, each one easily replaced by the next sap waiting in line to take their place.
Posted by Robert Kennedy at 2:15 AM