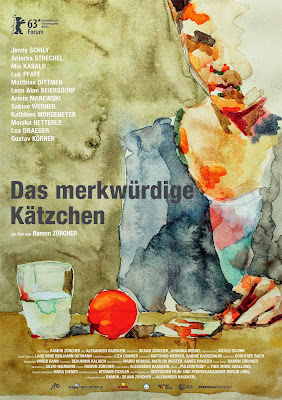 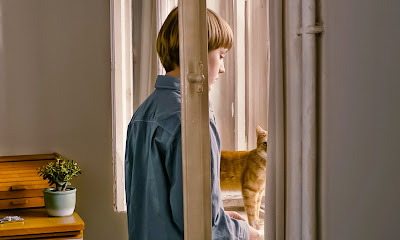 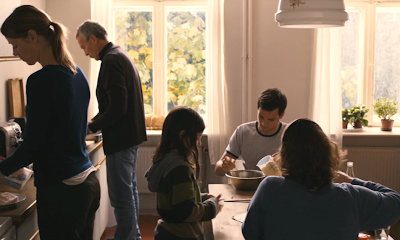 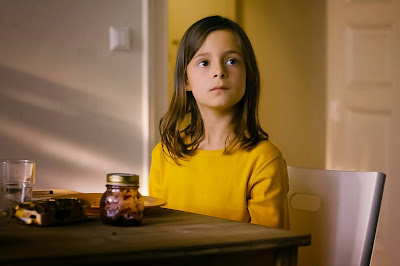 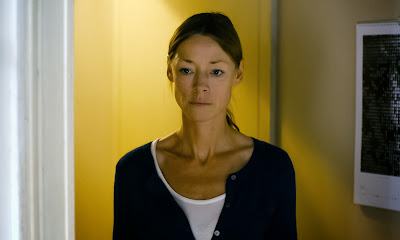 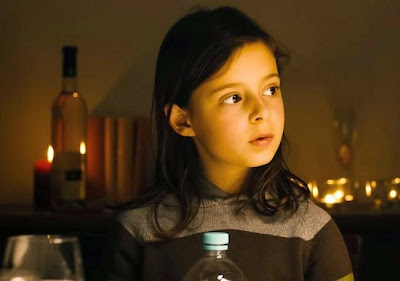 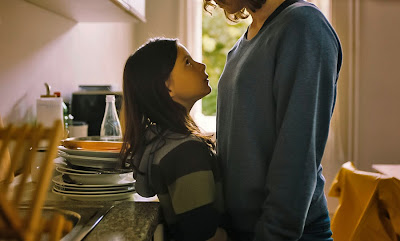 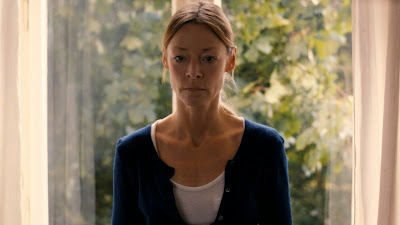 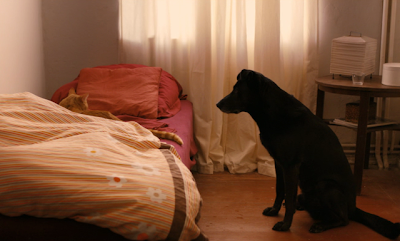 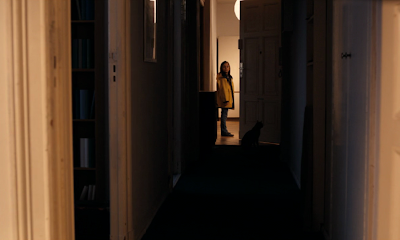 The film is little more than a day in the life of a Berlin family, meticulously observed with pinpoint accuracy, but what first-time director Ramon Zürcher offers is a radical perspective on ordinary events, where the film is peppered with oddly juxtaposed connections, where even the most banal events are continually seen as slightly askew, where instead of a harmony so perfectly expressed in the brilliant opening shot of Béla Tarr’s WERCKMEISTER HARMONIES (2000), Werckmeister Harmonies - YouTube (10:56), where drunken bar patrons become moons and spinning planets revolving around the sun, Zürcher’s universe is continually seen spinning out of balance with a rhythm of disorder, becoming an absurd comedy of errors.  Supposedly conceived at a seminar conducted by retired Hungarian director Béla Tarr, the idea draws upon Kafka’s 1915 novella The Metamorphosis, where a common, ordinary experience turns into an out of whack, surreal fantasy, where realistic events are given an often dream-like quality, but no explanation is ever offered for this most peculiar take on what is otherwise perceived as the mundane and the routine.  A minimalist economy of means at only seventy-two minutes, written, directed, edited, and produced by Zürcher, while also providing the sound editing and digital effects himself, the director brings a formal precision to confined space, as the claustrophobic camera offers a fixed position inside a cramped family apartment, placing the viewer in the center of the action as people slide around each other as they move throughout the kitchen in a flurry of activity while fixing themselves something to eat.  While the stoic mother (Jenny Schily) continually reminds her precocious daughter Clara (Mia Kasalo) to keep quiet as grandmother is still asleep, since Clara has a habit of screaming at the top of her lungs when the garbage disposal is running, it is nonetheless the mother that turns on every conceivable modern electrical appliance in the kitchen while grinding and roasting individual cups of coffee, squeezing fresh juice out of oranges, disposing of the garbage and preparing food, each one drowning out the conversation with the most disruptive and annoying noise that seems to come in the most inconceivable moments.  Equally strange is an early morning visit to fix a washing machine, where a dizzying routine of constant movement is established with people entering and exiting the frame, all jostling for position, with the camera centered upon their waists, often cutting off their heads, becoming a choreography of moving bodies not only coming in and out of the room, but in and out of the front door of the apartment.

Initially the flurry of activity, including a mischievous cat being chased by a much bigger dog, is amusingly off-kilter, where there’s seemingly no rhyme or reason for what’s happening, becoming a strange jumble of chaos that accentuates sight gags and physical comedy, where the film is largely a collection of small moments that grow more absurd with often incomprehensible mutterings from each of the characters, establishing weird personalities, where by the end, human activity is seen as a fishbowl style madhouse where only the cat, with an air of indifference and lack of concern seems the most sane creature in the household.   The non-narrative, unpredictability factor gives this the rigorous form and outlandish style of an experimental film in keeping with the director’s Berlin School (films) mentors at the German Film and Television Academy in Berlin (Deutsche Film- und Fernsehakademie Berlin), where Zürcher, born in Switzerland, has been a student since 2006.  Led by directors including Christian Petzold’s Yella (2007), Jerichow (2008), Barbara (2012) and Beats Being Dead (Dreileben 1 - Etwas Besseres als den Tod) (2012), Thomas Arslan, Angela Schanelec, Christoph Hochhäusler’s One Minute of Darkness (Dreileben 3 – Eine Minute Dunkel) (2012), Ulrich Köhler, Benjamin Heisenberg’s THE ROBBER (2010), Valeska Grisebach’s BE MY STAR (2001) and LONGING (2006), and Maren Ade’s THE FOREST FOR THE TREES (2003) and 2010 Top Ten Films of the Year: #9 Everyone Else (Alle Anderen) (2009), their films tend to lack mainstream accessibility, where according to German director Oskar Roehler, “They are always slow, always depressing, nothing is ever really said in them (though) they are always well thought of.”  The fall of the Berlin Wall in late 1989 triggered a collapse not only of political institutions, but many elements of cultural identity, particularly in the former East Germany which simply disappeared overnight, where Berlin became the cultural epicenter of new progressive measures, where in the mid 1990’s, graduates of the German Film and Television Academy emerged with a new aesthetically-driven form of cinema.  Abandoning the historical context embraced by most commercially popular German films at the time, films of the Berlin School tend to deal with life in the here and now, refraining from delving into Germany’s dark past, except through ambiguous means.  According to Marco Abel from his 2008 article in Cineaste, Intensifying Life: The Cinema of the “Berlin School”, elaborated upon further in his 2013 book, The Counter-Cinema of the Berlin School (Screen Cultures: German Film and the Visual), this:


“counter-cinema is built around the unusual style of realism employed in the films of this movement, a realism that presents audiences with images of a Germany that does not yet exist.  It is precisely how these films’ images and sounds work that renders them political.  They are political not because they are message-driven films but because they are made politically, thus performing a ‘redistribution of the sensible’ — a direct artistic intervention in the way politics partitions ways of doing and making, saying and seeing.”

According to David Pendleton, programmer of the Harvard Film Archive,


“In contrast with the markedly affective style of the New German cinema (of the 70’s) — Fassbinder’s melodramas, Herzog’s eccentricity, Wenders’ melancholy — these directors (of the 90’s) exhibit a striking coolness, at least on the surface.  In the absence of being told how to feel, the spectator is urged to confront his or her own involvement.”

Zürcher himself has described this film as “a horror film without horror,” as the unique camera angles and protracted use of offscreen sound helps create confusion and disorientation, using alternative methods, among which include whimsical fantasy to help provide a look at a nation that longs for a better future but still hasn't found itself, like it’s still stuck in a labyrinthian puzzle with no exit plan.  Unlike the formal rigor of recent German films examining a crisis of faith, Katrin Gebbe’s Nothing Bad Can Happen (Tore Tantz) (2013), punk fascism disguised as religious parable, or Dietrich Brüggemann’s Stations of the Cross (Kreuzweg) (2014), an unwavering doctrine of religious fear and absolutism, Zürcher’s more mischievous film is perhaps closer to the zany universe embellished in Giorgos Lanthimos’s acclaimed DOGTOOTH (2009), where the off-the-wall absurdity is a world unto itself, punctuated by the musical theme of “Pulchritude,” Pulchritude By Thee More Shallows - YouTube (2:36), a hypnotic yet semi-agitated string piece from the San Francisco post-rock experimental indie group Thee More Shallows, whose constantly recurring ballet-like motif resembles the pulsating roar of a surging locomotive engine as it accelerates down the tracks.  Over time, the eccentricities of the characters are exposed, making strange remarks, concocting mysterious tales, offering weird commentary, all of which has an aura of randomness about it, creating a spontaneous feel.  But despite the quirky imagination at play, where you get the feeling something is always lurking just outside the frame, the question is does it add up to more than the sum of its parts?  Perhaps the key is staring at that tired, worn-out face of the mother, like a world-weary Kaurismäki character, whose depressive gaze tells all, or perhaps it’s the pint-sized view as seen through the clever imagination of young Clara, still too young and magical to matter all that much or to be taken seriously by the collection of droll adults in the room, often completely ignored while discovering things all on her own, much like the sleepy dreams and free-spirited rhythms of the cat, who romps around the house when she pleases, yet sees and ignores everything.