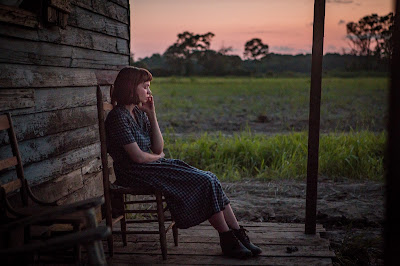 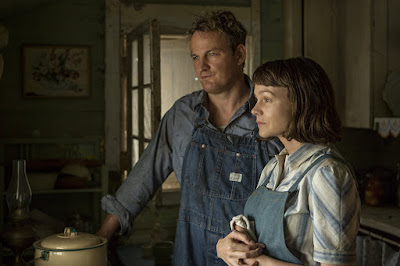 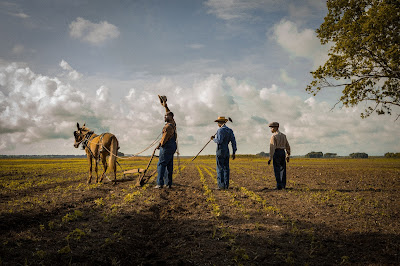 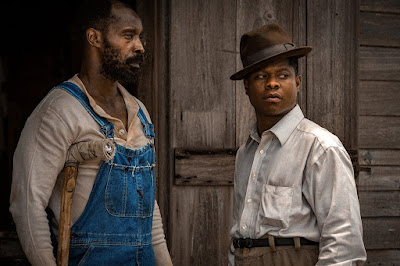 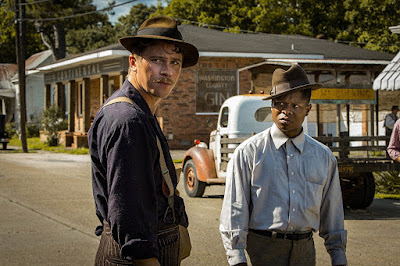 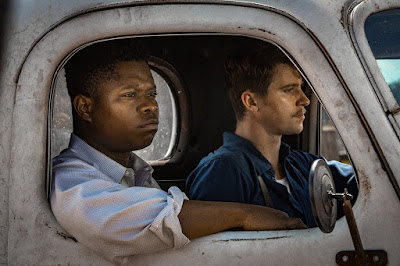 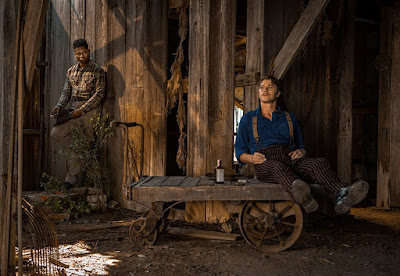 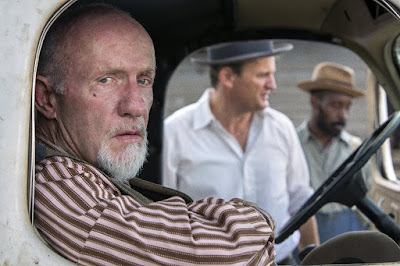 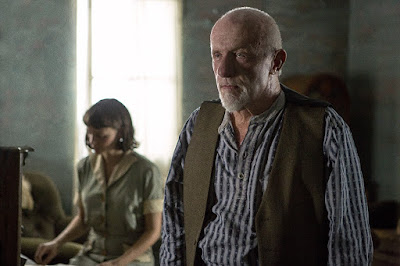 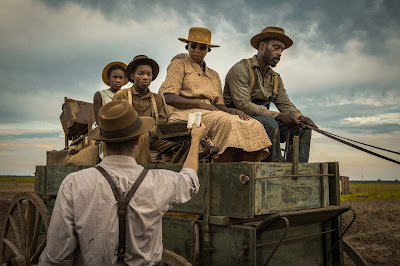 Perhaps the one that has it worse is Vera (Lucy Faust), a white sharecropper neighbor who lives in the same extreme poverty as the blacks, living pitifully close to madness, as her marriage is in shambles, devastated by extreme deprivation.  World War II calls two men into action, where Jamie becomes a decorated fighter pilot who completes harrowing bombing missions in Europe, while Ronsel (Jason Mitchell), the oldest Jackson, drives a tank in an all-black military unit known as the Black Panthers serving under the command of General Patton, one of the most effective combat units in the war despite their segregated status away from white soldiers.  Ronsel reveals that unlike back home, Europeans welcome blacks, where they are viewed as more human, including white women, thankful they are protecting their homes and communities, ending up in a relationship with Resl (Samantha Hoefer), a pretty German girl who welcomes him into her home.  While obviously taking a toll on both men, both return home under differing circumstances, as Jamie is a war hero, but he’s jittery and drinks heavily covering up symptoms of trauma, while Ronsel has newly discovered confidence in himself, as he’s backed away from no one, standing up to all enemies that stood in their way.  Upon returning back home to Mississippi, however, he’s just an n-word to the locals, who treat him as such, facing the same bigotry he’s known all his life.  “Over there I was liberated…Here I’m just another nigger pushing a plow.”  It’s Hap who tells his son not to stir up any resentment in white folks, to apologize even if he’s the harmed party, expressing the prophetic words, “they’re just gonna win every time.”  However, Ronsel and Jamie hit it off, as a black pilot once saved his back in the air, showing gratitude afterwards, allowing Ronsel to ride in the front of his pickup truck, sharing a drink, where they can get personal and share stories, spending secret time together away from all the rest, actually developing an unlikely friendship with mutual respect.  But this doesn’t go unnoticed, which does not bode well in this town, in this era, with the stench of blood and violence lingering in the air, where they are eventually outed by his own Pappy, who calls him a traitor and a “nigger lover.”  This escalates into a full-scale KKK assault on both men, beaten and tied up by dozens of men in white hoods, with Ronsel stripped naked, facing the sadistic onslaught of racial hatred, which is an abomination from which there is no return.  This level of cruelty is mirrored perhaps by the brutally harsh demands of the soil, creating a communal burden of unending poverty from harvesting cotton, a failed economy dependent upon slave labor, causing resentment towards blacks since the Confederacy days.  Filming this untold story offers a window into our own depraved Jim Crow era history, which is especially relevant today with a President of the United States that refuses to condemn white supremacist groups, as a surge of white nationalists make up much of his support.  Easily more ambitious than her earlier film, Pariah (2011), though not necessarily better, it has a broader historical reach and feels more impactive, though it still feels rough around the edges.  Beautifully expressed in wide vistas and close-ups on worn out faces by cinematographer Rachel Morrison, who also filmed Ryan Coogler’s Fruitvale Station (2013), where much of the raw material hits a nerve, but could use a subtler hand when it comes to achieving greater artistry.
Posted by Robert Kennedy at 12:01 AM