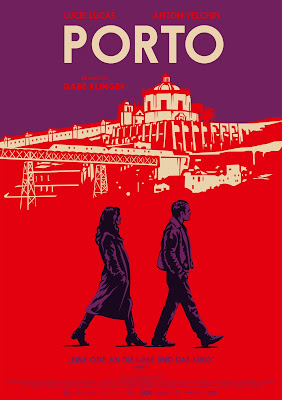 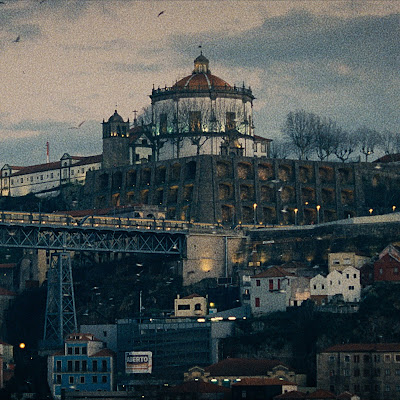 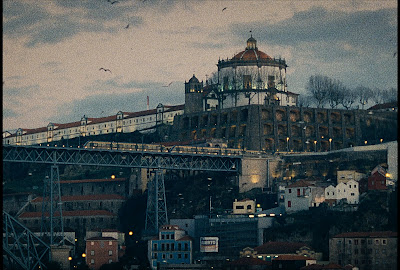 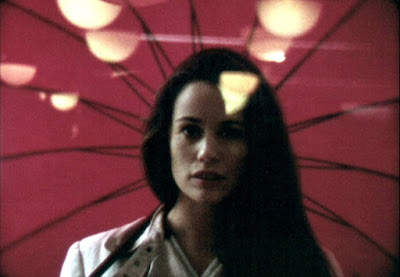 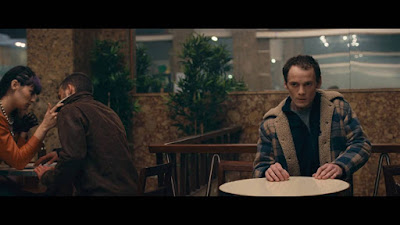 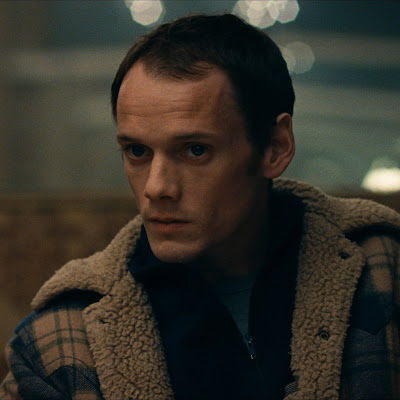 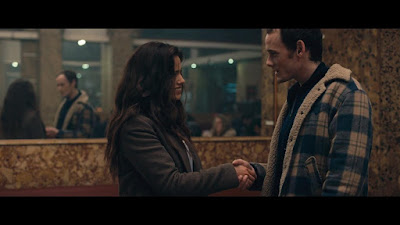 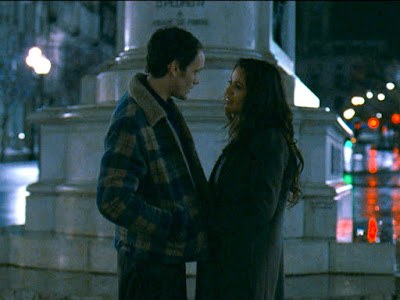 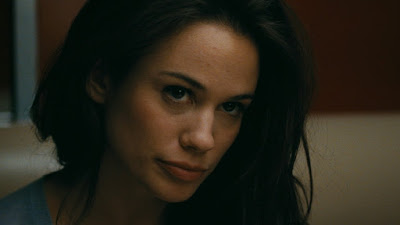 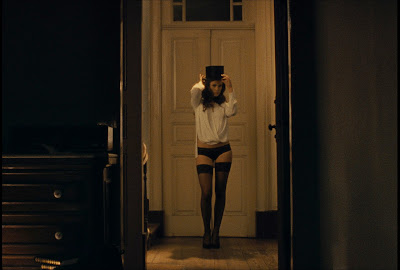 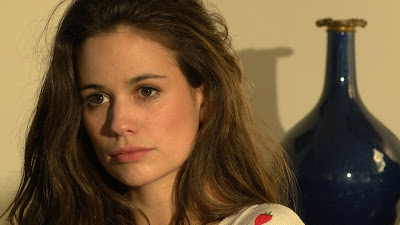 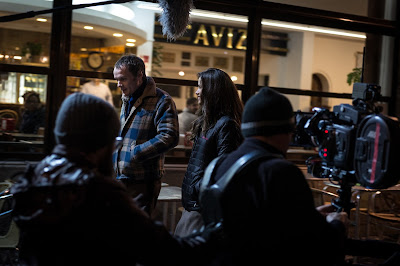 Actors on the set 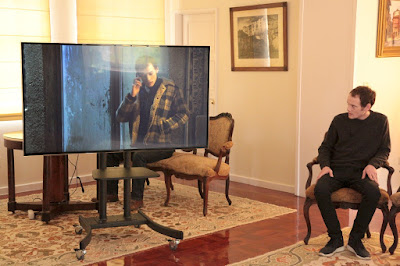 A memory piece, using cinema as a means to explore what might be the most intensely personal moments in our lives, yet just as quickly we move on from them, like a glorious sunset, gone but not forgotten, unable to sustain the emotional immediacy of that moment, where it gets lost in the fabric of what we eventually become, perhaps even exaggerated or elevated into something more idyllic over time, yet never leaving what amounts to that essential core of our interior lives.  This is a movie that starts off beautifully, offering lingering portraits of what could be any populated European city, in this case the older regions of the city of Porto, Portugal, offering impressionistic glimpses of time passing.  Perhaps embracing Manoel de Oliveira’s PORTO OF MY CHILDHOOD (2001), in a brief 76 minutes this plays like a reverie, a fleeting memory, though the press notes suggest it attempts to evoke a cinematic form of saudade (an untranslatable Portuguese word that describes a deep emotional state of nostalgic or profound melancholic longing for an absent person or place that one has loved, carrying with it an assurance that this feeling may never happen again), a common fixture in the literature and music of Brazil, Portugal, and Cape Verde, perhaps most recognizable through a unique style of singing, evoking extreme sadness, for instance, Saudades do Brasil em Portugal! (Amália Rodrigues) - YouTube (2:03) or Cartola - AS ROSAS NÃO FALAM - Angenor de Oliveira - YouTube (2:54), though one of the most infamous uses of this format may be seen in a Mexican Huapango song performed by Brazilian singer Caetano Veloso in Almodóvar’s TALK TO HER, Caetano Veloso Cucurrucucu Paloma (Hable Con Ella) - YouTube (3:44).  In much the same way Klinger’s earlier film, Double Play: James Benning and Richard Linklater (2013) revealed the influence that filmmakers James Benning and Richard Linklater had on him, this is another work that is basically a love letter to the timelessness of the art of cinema, paying tribute to the various kinds of cinematic aesthetic that have captured this filmmaker’s imagination, using different film stocks, 35 mm, 16 mm, and Super 8, and changing aspect ratios to convey different shades of memory.  Whether it’s a success or not may vary upon a viewer’s appreciation for film history, as Klinger has brought his own unique qualities as a film critic, cinema professor, and curator into his own work that is strikingly spare in content, sometimes feeling lightweight and overly pretentious, particularly some of the dialogue, which at times feels cringeworthy, where two things stand out, the eloquently spare piano music from Ethiopian nun, Emahoy Tsegue-Maryam Guebrou, The Homeless Wanderer - YouTube (7:07), but also the soaring beauty captured by cinematographer Wyatt Garfield, where the gorgeous golden hue of the lovemaking scenes in an otherwise darkened room is inspired by the matchless beauty of the opening scene in Hou Hsiao-hsien’s Flowers of Shanghai (Hai shang hua) (1998), arguably among the most visually entrancing opening shots in all of cinema, flowers of shanghai first scene / shot - YouTube (8:35).

While the film opens and closes on the same shot, it unravels in three chapters (Jake, Mati, and both together), following two people, Jake, (Anton Yelchin, the Russian-accented Chekov in Star Trek who tragically died in a freak accident following the end of production), an American drifter working abroad and Mati (Lucie Lucas), a French archaeologist, on separate paths that intersect briefly for one cataclysmic night in a foreign city, using the city of Porto to transport viewers into a different time dimension, moving backwards, like Gaspar Noé’s Irreversible (Irréversible) (2002), where the future, present, and past merge into one.  Featuring a brief outdoor exchange before winding up at the same café, the film is a labrynthian journey infused with jazzy piano interludes of Jake walking anonymously through crowds, stopping briefly at the window of a diner, then continuing past corner bars, down side streets with narrow passageways and stairways before returning to his rented room, where the overall feeling is an existential tone of wandering alone in foreign territory.  What’s immediately apparent is that he is revisiting some of these same spots that he experienced earlier in his youth, now a disheveled and forlorn figure, appearing haunted by what he sees, a ghostly shadow of what once existed.  All expressed through vague, barely audible dialogue, where the connecting pieces occur in a corner bar with the music of John Lee Hooker playing, JOHN LEE HOOKER - Shake it Baby YouTube (4:23), where she seems to be staring a hole right through him, literally inviting him to introduce himself with a knowing smile, but this moment is broken by sadder reflections of what was lost, as lone figures continue to walk down solitary streets in the night.  The same moments reoccur again from slightly different perspectives, repeating the same phrases, as thoughts repeat themselves, like a record stuck on the same note, before moving on.  These elliptical passages are intertwined throughout, mixed into the threadbare script, appearing to be haunting moments lived over again and again through what appears to be a bleak and disconsolate life for Jake afterwards, still clinging to the past, refusing to let her go, becoming something of a stalker in real life, where she is forced to purge him out of her life with the help of the police, literally thwarting his existence.  Stitching together these moments in time, we know it ends badly, all of which is presented before they even meet, where we only get glimpses of their lives beforehand.  Easily the biggest disappointment in the film is a choice the filmmaker makes to leave a scene with Françoise Lebrun as Mati’s mother in a conversation with her daughter in French unsubtitled, her only appearance in the entire film, a legendary actress from Jean Eustache’s The Mother and the Whore (La Maman et la Putain) (1973), a seminal work in film history.  This is the cruelest moment of the film, and a maddening one, as this resembles the Godardian contempt for an American audience displayed in Film Socialisme (2010), where he didn’t even bother to provide translated subtitles for the American theatrical release, suggesting instead they should learn French.  This haughty attitude exhibits a sneering elitism that is simply inexcusable on any level.

While the film is a fallout from a sensually charged night of bliss, first viewers are rather humorously treated to the morning after, as Jake awakes alone, but sticks around, so he is still there much later, only to be surprised when Mati returns home after work with the man in her current relationship, her classics professor João (Paulo Calatré), who may or may not become her husband, but he can be seen picking up their daughter later in life after they have separated, where it obviously didn’t turn out the way they hoped.  João, however, couldn’t be more polite to Jake, taking unexpected pleasure in his presence, like fresh meat to toy with, while Jake finds the man vile and overbearing.  This brief encounter leads to a more abstractly projected future, using experimental imagery that serves as what amounts to home movies, all succinctly expressed like an afterthought.  By the time the couple actually meets, what happens is a foregone conclusion, yet after meeting at the club, it starts by Mati asking Jake to carry a heavy box from her car to her new apartment, leading to the most protracted shot of the film, slightly amusing, as it becomes an endurance joke that is on him, while he politely shrugs it off like it’s nothing.  Her apartment, with a giant window overlooking the Douro River that sneaks though the city’s central neighborhoods, is essentially a mattress on the floor, only the essentials, becoming an idyllic portrait of a sexual affair, losing themselves in one another’s embrace, whispering sweet nothings, though it is visualized from a specifically male point of view, with the camera only interested in finding her body, becoming a bit ludicrous after a while, though it is an idealized fantasy of hopeful expectations, compounded by Mati assuming the Lena Olin role in Philip Kaufman’s THE UNBEARABLE LIGHTNESS OF BEING (1988), which becomes a fixated image of the young filmmaker’s idea of sensuality.  Shot on widescreen in the most luscious color available through 35 mm, the pronounced density of the texture is alluring, though the animated sexual moans and groans less so, as this might be too early in the director’s career to explore such intimacy, as what it lacks is maturity.  Because they barely know each other, it’s not so hard to understand the ramifications, building up the rhapsodic delight to make way for the inevitable fall, like Icarus coming too close to the sun, plunging headlong into a sea of indifference, much of it precipitated by Jake’s youthful reactions, going overboard, losing himself in this woman, unable to comprehend that she has a different life that does not include him.  His attachment becomes an obsessive fixation, becoming psychologically unhinged, where his personal choices only inflate the delusion, turning affection into something dangerous, becoming overly burdensome, baggage that must be left behind.  Of course, that doesn’t make Jake feel any better, unable to separate his own feelings from hers, still thinking they belong together.  By moving backwards in time, the finale avoids any emotional fallout, adding a more hopeful day after, one with positive inclinations, where it ends still living the dream, oblivious to all else.
Posted by Robert Kennedy at 12:00 AM