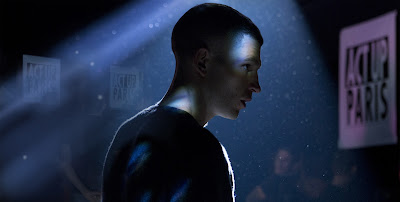 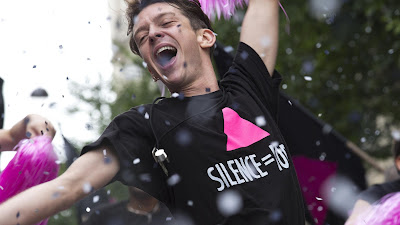 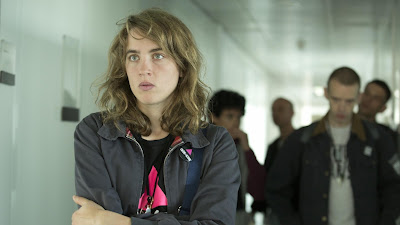 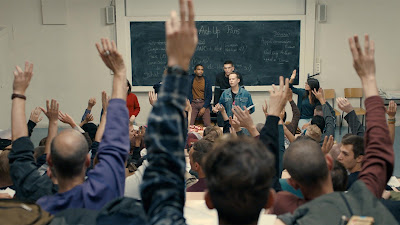 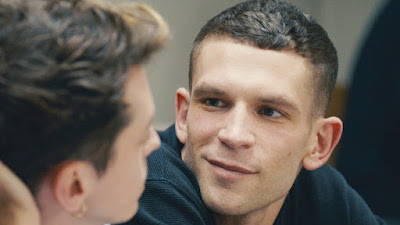 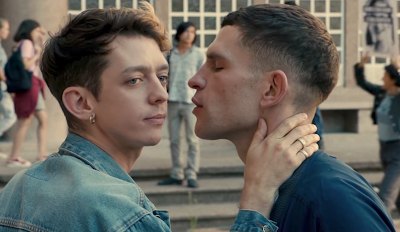 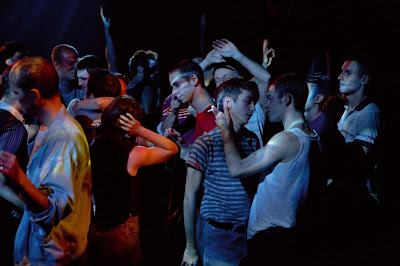 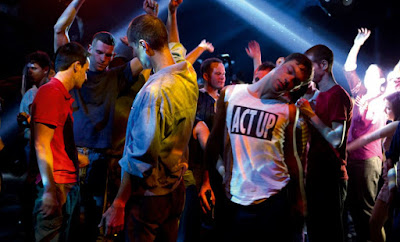 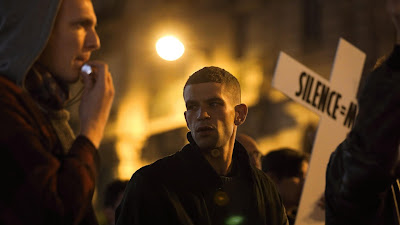 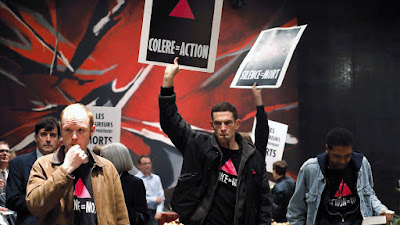 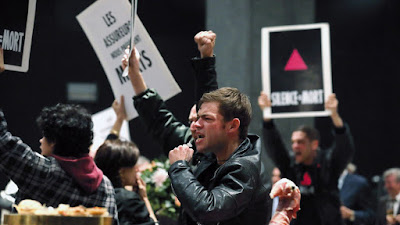 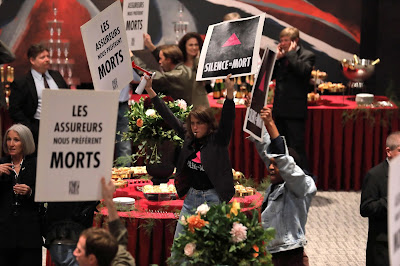 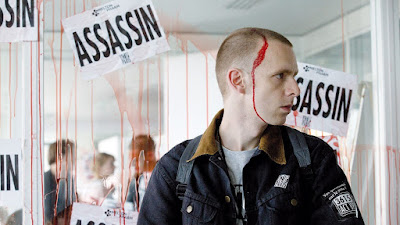 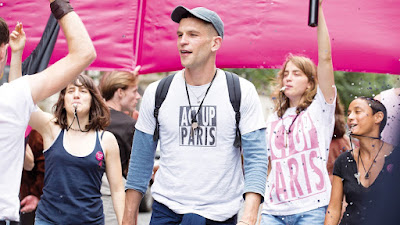 Campillo is known for being the writer of Laurent Cantet films, including TIME OUT (2001), HEADING SOUTH (2005), or Cantet’s Palme d’Or winning film The Class (Entre Les Murs) (2008), but BPM (Beats Per Minute) recalls the director’s own experiences in the early 1990’s working alongside other social activists from Act Up-Paris in their attempt to demand public knowledge and awareness about the AIDS epidemic in France, with more new people diagnosed HIV positive in France than any other European nation at the time, fueling anger and personal indignation at the government’s more cautious go slow policy which was allowing too many afflicted people to die.  Very ironic that in Chicago, both BPM and Ruben Östlund’s The Square, two films from Cannes that vied for the top prize, with Östlund’s film winning the coveted Palme d’Or (1st place) and Campillo’s BPM winning the Grand Prix (2nd place), opened in the same theater, with the Palme d’Or winning film screening in the big theater, while Campillo’s film was relegated to the small theater and vanished after one week.  This is the kind of disrespect that will forever accompany this film, unfortunately, all based on a rather arbitrary decision taking place by a Cannes jury headed by Spanish director Pedro Almodóvar, but also including German director Maren Ade (whose 2016 film Toni Erdmann was snubbed the previous year), Chinese actress Fan Bingbing, South Korean film director Park Chan-wook, American actress Jessica Chastain, French actress Agnès Jaoui, American actor Will Smith, Italian film director Paolo Sorrentino, and French-Lebanese musical composer Gabriel Yared.  The decision was no doubt based on a compromise of nine people, with Almodóvar getting choked up at a post awards press conference when asked point blank how he, a champion of LGBT rights, could not award BPM top prize, POST PALMARES - Press Conference - EV - Cannes 2017 - YouTube (25:37, coming at about the 15:50 mark), with Almodóvar in broken English acknowledging, “I loved the movie. I cannot love more.  I was touched since the very beginning till absolutely the end and after the end, but I don’t know.  Tomorrow, perhaps, we will read in the papers what the rest of the audience and journalists think.  This is a very democratic jury.  I am the ninth part of this jury.  So this is the only thing I can tell you.  The huge majority of us loved the movie of Campillo.  I’m sure it’s going to be very successful everywhere.  And I’m sure it’s going to remind this country of something that happened here not so many years ago that, whether you belong to the LGBT, which I am, it was an injustice.  Campillo tells the story of real heroes, that we saved many lives.  We all agree with that.” (Personally, I blame Will Smith and an anti-gay prejudice, as echoed by his opening remarks at that press conference making an ill-advised joke about Almodóvar’s predatory practices.  It was not funny, he did not apologize, and I’m guessing he played a significant role in undermining the film, probably supported by the Chinese, Korean, and Arab contingency, who come from predominately anti-gay cultures.  Very unfortunate.  I’m guessing Almodóvar’s support came from Chastain and Jaoui, with Sorrentino on the fence, and maybe Ade and the others preferring The Square.)

Having seen both films, it’s hard to believe that Cannes, once again, picked the wrong film.  While Östlund’s is the far flashier and more entertaining film, comically absurd and satirically relevant, with larger commercial prospects, it’s a much more overblown effort, using cruelty as comedy, feeling more like a frontal assault on modern practices, accentuating the sheepish behavior of the norm, suggesting complacency leads to an overall cowardice in Western democratic societies to actually stand up for what’s right, forcing others to fight your battles for you.   Campillo’s film, on the other hand, is a more urgent, harrowing tale, bravely confronting life and death issues in a nation that doesn’t want to hear, showcasing a community that was at that time in history largely marginalized and misunderstood, where they literally had no heroes or role models, with news agencies suppressing their message, when there is literally no one else on the front lines offering help and assistance, where it is entirely up to these few.  This is a rare film that remains personal, rising to a level of poignancy but never overreaching into melodrama, where the eye-opening revelation is viewing a crucial part of history through the eyes of gay activists themselves as they are making that history, actually memorializing an era before the advent of protease inhibitor drugs that stopped death from being a foregone conclusion, including the heated discussions of their meetings, which are often bitterly confrontational, pitting activist militancy against more diplomatic measures, where we’re witness to outlandish guerilla tactics against indifferent pharmaceutical companies designed to force them to share the latest scientific research while heightening public awareness, including a festive party atmosphere afterwards to let off steam, dancing in strobe-lit dance clubs to the pulsating techno score of Arnaud Rebotini, where this film is also not afraid to include open displays of affection, including graphic sexual encounters, something that would never happen in American films.  The film is extremely articulate, introducing a host of characters, yet the authenticity of the script is vividly striking, eventually narrowing its scope and focusing on a single love affair, with heartbreaking results.  The French response was about a decade after the American AIDS crisis of the 80’s, where the Reagan administration refused to adequately fund research to stop the epidemic, where there are similarities between this work and American playwright Larry Kramer’s 1985 play The Normal Heart, as Kramer is himself a gay activist and founder of HIV advocacy groups, like Act Up (AIDS Coalition to Unleash Power), taking it upon himself to warn society about AIDS even before it had officially been given a name.  The French have more awareness about the disease and model many of their activist ideas from the American model.


Perhaps nothing has the definitive reach of Tony Kushner’s two-part play Angels in America: A Gay Fantasia on National Themes, one of the defining works of American art and culture, which premiered in the early 90’s, with the first part (Millennium Approaches) winning the Pulitzer Prize for Drama in 1993, dominating the Tony awards for two years in a row, 1993 and 1994, putting gays center stage at a time when they were openly discriminated against and living under siege (has that changed?), literally changing the way gays are perceived around the world.  What Campillo’s film does is also humanize the participants, developing a fictionalized story that finds a gay community in the midst of an identity crisis, with people bewildered by what to do, reading everything they can coming out in medical journals, trying to learn the latest drug strategies, what’s effective, what are the side effects, desperately searching for anything to stop the slow deterioration of healthy T Cells in the human body, all in an attempt to stop the flow of humans dying, where Campillo reminds us what a wrenching experience it is to witness those around you slowly dying.  Unlike the cowardice and timidity of other highly acclaimed gay love stories like Luca Guadagnino’s Call Me By Your Name (2017) that don’t even show any sex scenes for fear of turning off a mainstream audience, this film shows the incredible courage of those gay lovers at the time who remained intimate, graphic sex scenes included, even without knowing the full ramifications of their actions.  The first part shows the collective efforts of those galvanizing forces at work, not just the contentious arguments, but the practice of welcoming new members, where everyone is recognized as HIV positive (even if they’re not), teaching them the rules of discussion (no applause, only the clicking of fingers), figuring out the most effective public strategies, including what’s likely to get television airplay, deciding what words on posters are more effective, what areas of the city to target, what visible actions they should carry out at the Gay Pride Celebration, and most importantly, how to get the Mitterrand government to take their cause more seriously.  At the meetings we are introduced to Sean (Nahuel Pérez Biscayart), one of the radical voices, and Nathan (Arnaud Valois), one of the new members, and one of few who is HIV negative.  The leader of the discussions is Thibault (Antoine Reinartz), always negotiating a balancing act between opposite extremes, while Sophie (Adèle Haenel) seems to lead the street campaigns.  In the latter part of the film an intense relationship develops between Nathan and Sean, as we witness in devastating fashion the deteriorating health of Sean, where one of the saddest scenes ever witnessed is watching sex with a patient who is already so close to death, as if that is his last ounce of strength.  An unstated aspect of the film that seems particularly important to recognize is the degree of affection on display between gay friends, not just in a relationship, but towards others who are experiencing adverse health effects, as the film fully empathizes with them and always recognizes their emotional ups and downs, along with their deflated spirit, exhibiting a tenderness and quiet kindness, as these are truly people in crisis, where their frequent arrests and bold actions at the time opened the door for others to walk through completely unscathed.
Posted by Robert Kennedy at 12:13 AM