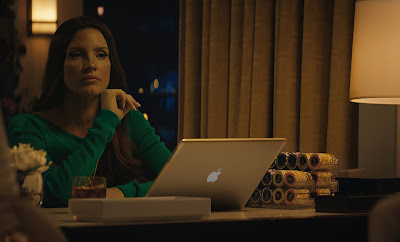 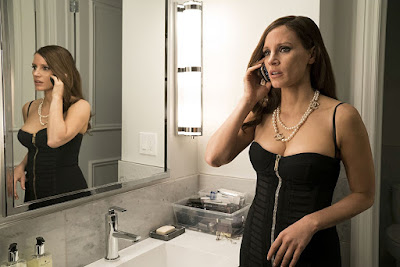 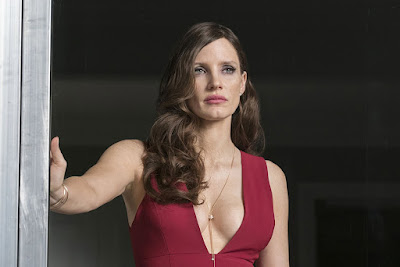 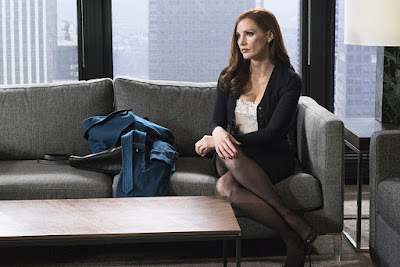 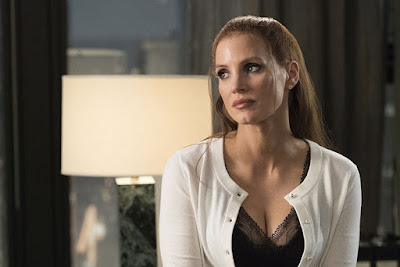 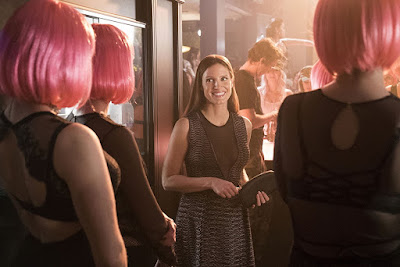 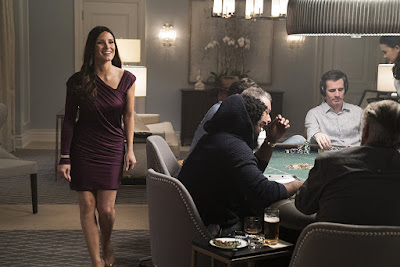 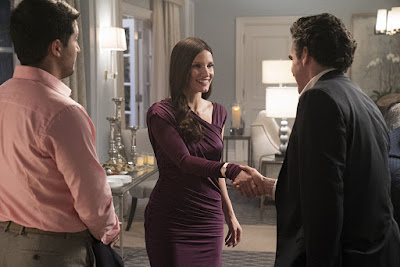 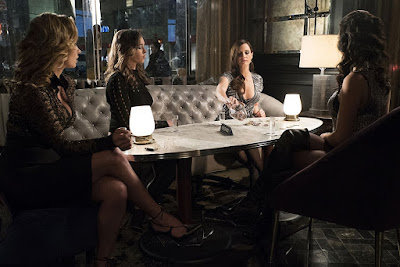 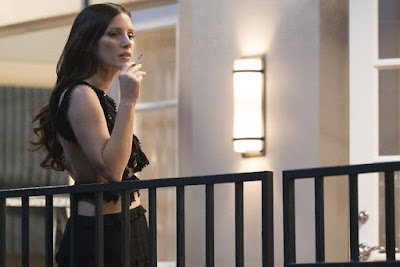 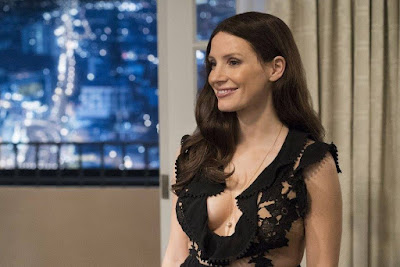 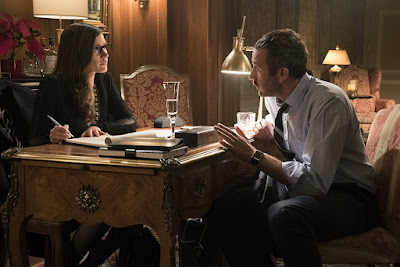 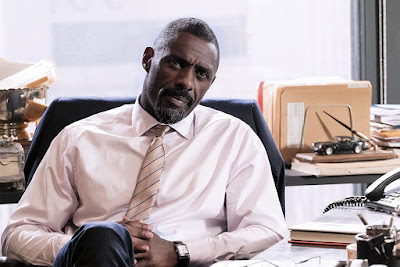 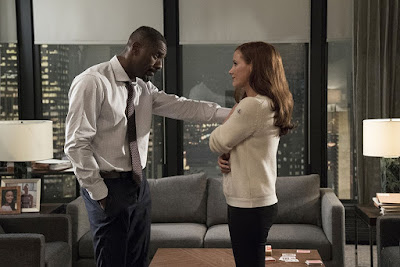 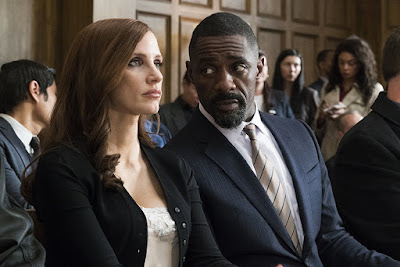 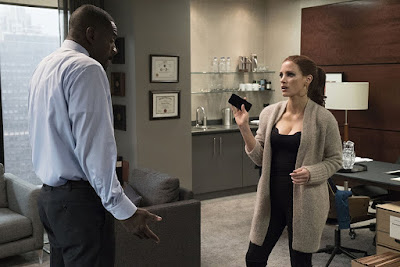 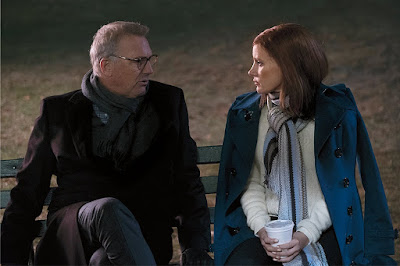 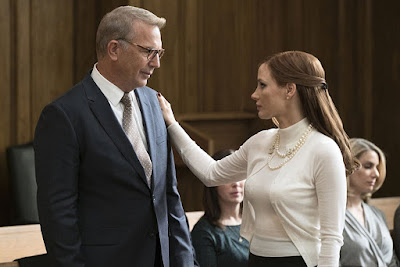 Success is defined by being able to go from failure to failure with no loss of enthusiasm.
—Winston Churchill

Following a series of written projects that bring to life stories about influential people, like a U.S. Congressman’s influence over the Afghan War in CHARLIE WILSON’S WAR (2007), a portrait of Mark Zuckerberg in The Social Network (2010), Billy Beane’s introduction of sabermetrics into baseball in Moneyball (2011), or the egomaniacal force behind computer innovator Steve Jobs (2015), Aaron Sorkin’s first directed film is largely a stream-of-conscious exposé where the inner narration reveals all, though better known as the brilliant screenwriter for David Fincher’s The Social Network (2010) as well as the highly praised political television drama The West Wing (1999 – 2006).  Calling Fincher from time to time throughout the shoot for directing advice, Sorkin has a created a striking portrait of a highly confident and liberated woman, a fearless role model of sorts, though the film is largely about the male psyche, as she achieved her fame with an acute understanding of how to manage that psyche, skillfully manipulating the various pieces, like players on a chess board, creating the most exclusive high stakes poker games where only the elite are invited, including movie stars, hedge fund managers, big name athletes, Saudi princes, and other power brokers exchanging millions of dollars at the table, with one man losing $100 million dollars one night, paying up in full by the next day in order to be invited back to the next week’s game.  A film where the entitled character is based upon a strong fictional heroine from James Joyce’s groundbreaking 20th century novel Ulysses, among the more complex novels ever written, where her final monologue that concludes the book is one of the most powerful affirmations of life ever humanly imagined.  Born to a competitive and overcontrolling family where her father was a clinical psychologist, Molly became the third ranked American skier in the world with a chance of winning an Olympic medal in the Freestyle at the Salt Lake City Olympics in 2002 before a freak accident in the qualifying rounds knocked her out of the competition, while her younger brother was the #1 ranked skier in the world, World Champion by age 19, eventually drafted by an NFL football team, becoming the only known athlete to ever accomplish that feat.  Headed to Harvard Law School, which is the typical road to success, Molly (Jessica Chastain, who narrates throughout) takes a detour along the way following her accident, heading to the sunshine of Los Angeles, hoping to bathe in relaxation before heading to law school, but an interesting offer occurs along the way that literally changes her life, starting off as a cocktail waitress at LA’s Viper Room before she wis invited by the owner to host a poker game for Hollywood’s top celebrities, catering and managing for real estate club owner Darin Feinstein, aka Dean Keith’s (Jeremy Strong) high stakes basement poker game, listening in and learning everything she could about the game and how it works, eventually staking out her own turf in swank hotels where the buy-in entry fee per player is $250,000, often lost in just the first few hands in this freewheeling style of game.

Convinced poker is not a game of chance, but a game of skill, she believed she was operating legally in the early 2000’s, never taking any money under the table or for any special favors, she ran an inscrutably clean operation, providing all the amenities, refusing offers from male admirers, where her reputation was built upon concealing the actual identities of those involved, whose names were later revealed in court depositions, including Toby Maguire as Player X (played by the baby-faced Michael Cera), who turns out to be sadistically ruthless, taking great pleasure in crushing and demoralizing losing players, but also Leonardo DiCaprio, Ben Affleck, Matt Damon, Alex Rodriguez, Dan Bilzerian, Macaulay Culkin, and Nick Cassavetes, as well as billionaires such as Alec Gores and Andy Beal, allowing them to continue their games unimpeded by outside forces.  While building what was ostensibly a man cave environment for some of the wealthiest and most successful men on the planet, Molly was providing an image of herself that projected positively with these men, dressing in short skirts and brazenly revealing outfits, deciding that in a world dominated by rich and powerful men, she would have to present herself in a sexually desirable way, as only then would they pay attention to her and take what she had to say seriously.  Basically what this indicates is that in a man’s world, society values women for their sexual desirability, where had Molly not been so attractive, perhaps none of this would ever have happened.  Nonetheless, doors opened that otherwise would never have opened for her, making plenty of money at an early age, much of it in tips, which lasted over the course of an entire decade.  Perhaps the untold secret to these games was finding players who were willing to play, in other words lose, to the regular sharks at the table, who were always looking for fresh meat they could devour.  That means rotating new players into the games who had a reasonable expectation that they could win, as nobody likes being made a fool of, though this was essentially the goal of the regulars where winning was not enough, as they had to crush their opponents.  Often they got arrogant and a bit big-headed, as did Keith after a string of losses, suggesting Molly was taking too much from him, basically changing the rules of the game midstream, putting her in a less favorable position, which gave her the impetus to start her own game.  Perhaps unsurprisingly she got the regulars to come along.  All of this success came to a screeching halt when she was arrested by the FBI in the middle of the night taking all of her assets in the process, literally forcing her to make a deal, like name names and come clean.  Only Molly refuses to do that and hires a high powered attorney instead, Idris Elba as Charlie Jaffey (actually Jim Walden, a former clerk for Supreme Court Justice Anthony Scirica, also a former prosecutor who worked for 9 years as an Assistant U.S. Attorney in the Eastern District of New York).  Jaffey hesitates before taking the case, intrigued by how well-versed she is on the charges and by her staunch refusal to give up names.

Chastain and Elba are terrific together, as their high-powered interchanges are exceptional, providing most of the drama to the story, as they are playing out the various positions, including the government’s position as well as her own defense, where it’s clear Molly has turned down every opportunity to greedily profit from her position, leaving millions in debts unaccounted for, refusing to line her pockets, always dealing from a position of strength, which goes back to her childhood and the way she was raised.  Much of it told in flashback, the film creates a strong female persona rarely seen in films, constructed out of a series of moral choices that actually matter by the end, as that’s what she’s ultimately judged upon.  Chastain actually plays her character close to the vest, revealing as little as possible so as not to be seen as vulnerable or weak, offering sympathy and consolation to those in the midst of a downward spiral, actually becoming a voice of reason when the player has otherwise lost all perspective, all of which suggests a commitment not only to the game, but to those people playing in it, befriending them when they need it most.  This perspective is lost in the government’s case, but can be seen by viewers throughout the ongoing narrative, as she’s not a spiteful or selfish character, but thrives on being a professional as she can be.  After leaving LA when one player revolts against her, claiming she’s actually working for him, repeating almost exactly how Keith treated her, with men diminishing her importance, claiming only they have the power, and she’s only a minor character in “their” game.  By following Molly throughout, we’re able to see how conscientious she is, as opposed to the players, who can be viciously cruel.  This is largely a metaphor for how women are treated in this world, even at the highest levels, as men continue to think it’s all about them, single-mindedly thinking they make the game, allowing women to play in it on the periphery, but the huge sums of money are transferred exclusively from one man to the next, with no women allowed in their own inflated perception of power.  It’s interesting to see Sorkin write a feminist perspective in a patriarchal society, as it’s hardly an illusion, exposing a sexist way of thinking that is established from a man’s birthright.  While somewhat contrived, her father (Kevin Costner) comes back into the picture late in the film after Molly resurfaces under the verticality of Wall Street and New York, taking it to new heights, where she loses herself to drugs in order to stay afloat, keeping herself awake, then allowing her to sleep, which is the life of the super wealthy, like Prince or Michael Jackson, who died from the horrific consequences.  She enters that same territory, showing questionable judgment, allowing darker forces to enter her game, fronts for shadowy underworld figures, throwing everything off-kilter, losing all equilibrium to the power of money.  The Feds were never following her, but some of the disreputable players, where she was arrested as collateral damage in hopes of getting to them, but instead she decides to play by her own set of rules.  Altogether absent from this film, noticeably enough, is any hint of love or romance.  Based on a real life character who wrote her own book (that Sorkin adapts), her intriguing life story is more amazing than it seems, especially when considering all that was left out to protect the innocent.
Posted by Robert Kennedy at 12:22 AM