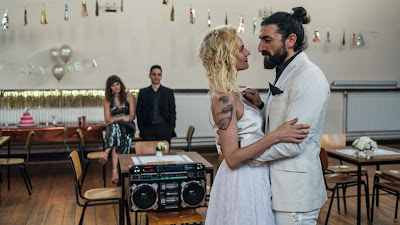 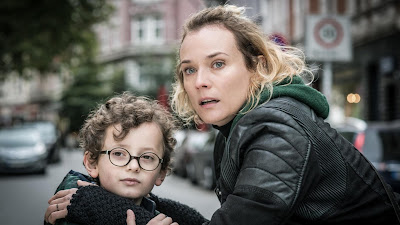 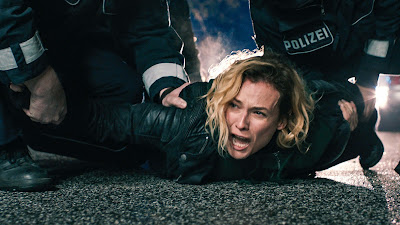 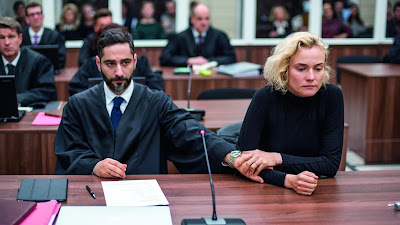 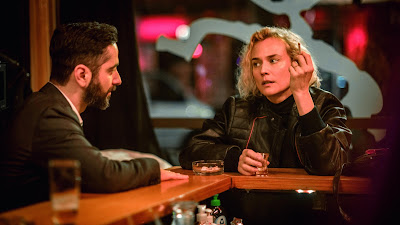 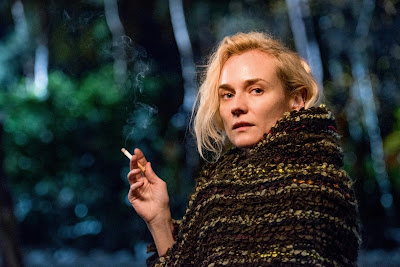 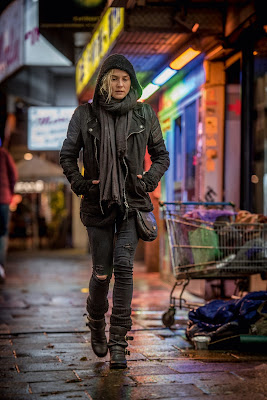 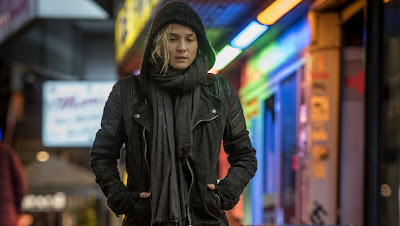 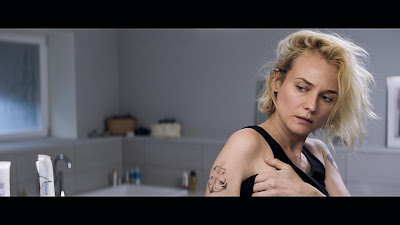 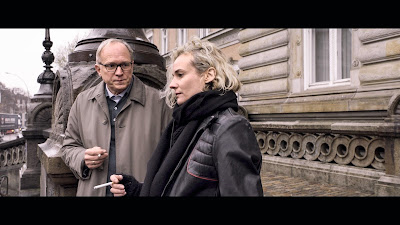 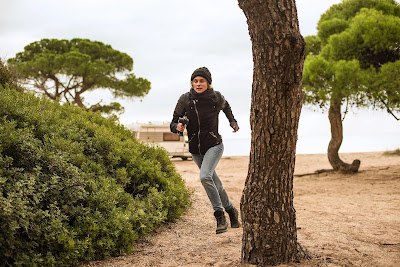 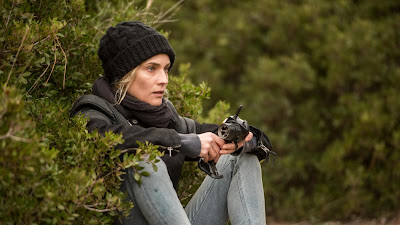 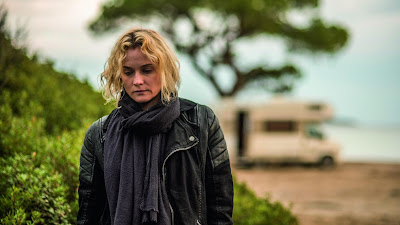 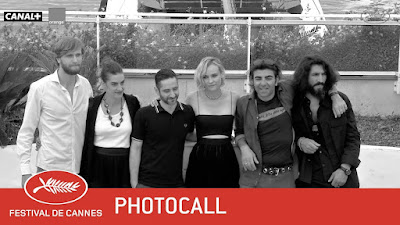 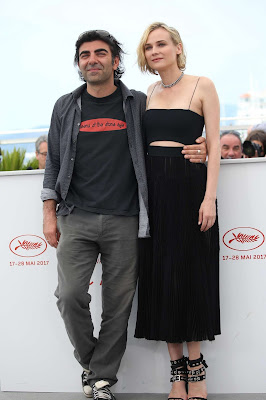 A rare film that couldn’t be more timely, especially in Germany, where the European refugee crisis has given rise to a nationalist anti-immigrant movement, specifically the neo-Nazi National Socialist Underground (NSU), which has carried out a series of bombing attacks targeting immigrants living in Germany.  Akin himself is a Turkish-German immigrant, where he views himself as a potential target.  According to information discovered on a neo-Nazi website known as Nuremburg 2.0, Akin’s name appeared on a list of artists and politicians targeted by them, which provoked him to write this film, co-written by Hank Bohm, a lawyer, better known as an actor affiliated with Rainer Werner Fassbinder.  In some respects, this is a contemporary update of Fassbinder’s ALI:  FEAR EATS THE SOUL (1974), where an older German woman and a young North African black were the targets of racist actions, literally ostracized by their respective families and friends, as well as the surrounding cultural communities, while this film also has a German woman and a Turkish immigrant husband, with the husband, along with their young son, becoming the target of a neo-Nazi bombing attack.  In the 60’s and 70’s the bombing campaigns in Germany were led by radical left extremists, the Baader-Meinhof gang, becoming the Red Army Faction (RAF), while a half century later the movement is comprised of radical right extremists in the NSU.  In an interview at Cannes with Alissa Simon, Director Fatih Akin on Returning to Cannes With Competition ... - Variety, Akin points out a recent scandal taking place in the German military where right-wing extremists created fictional personalities pretending to be Syrian refugees, actually planning bombing attacks so refugees would be labeled as terrorists.  This caused huge headlines of outrage against the refugees, where the government, in response, stopped letting refugees into the country, which was the precise goal all along.  While this paints an ugly picture of Germany, other nations are facing a similar surge of right-wing, neo-Nazi’s leading a wave of anti-immigrant hatred.  This is basically how Hitler got his start, by demonizing and then criminalizing anyone that wasn’t a member of the Aryan race.  It would be foolish to think these movements don’t have an impact, or that they don’t fabricate stories meant to instill fear and panic, as they helped elect the current President of the United States, who, thus far, has been averse to denouncing white supremists and neo-Nazi’s, as they helped get him elected.  Few other films are dealing with this issue head-on.

While this is a fairly mainstream film with an arthouse sensibility, it received horrible reviews when it premiered at Cannes, calling it insipid, disappointing, average, predictable, by-the-numbers, or heavy-handed, with Richard Porton of Cinema Scope even calling it a con job, all undeserved, with critics really missing the boat, as many continue to have their heads in the sand over the ugly rise of fascism and the neo-Nazi movement.  And while Akin does resort to cliché’s or stereotypes, it is only because those stereotypes are becoming more prevalent in influencing public sentiments.  After WWII, who would have thought, despite a German educational campaign to eradicate the depiction of Hitler as a hero, in just 50 years there would be such a resurgence of fascism not only in Germany, but around the world.  While the film may ultimately take a fatalistic view, this is not so strange in the world of cinema, which doesn’t pretend to have answers, but instead seeks to provoke audiences out of a sense of complacency, where the status quo tends to ignore home-grown extremist groups, preferring instead to target Muslim extremist groups like ISIS or al-Qaeda, as they’re easier to blame, where an international consensus already denounces their actions.  Not so easy when it comes to your own citizens, as denouncing them is eliminating some of your own potential voters.  The problem is convincing them to take an alternative path, but many who gravitate to neo-Nazi movements have nothing left but prejudice and hatred, misguided ideas that are not easily changed, where violence is the only outlet for their deep-seeded anger.  Western societies always think education is the key, that we can eradicate racism through knowledge, but extremist groups target the disinterested and less educated among us and fill their minds with inflammatory rhetoric, giving them a false perception of power.  Akin’s film is not a political exposé, and there is no mention of al-Qaeda or ISIS, instead it is an individual journey through the personal hell of having to live with terrorists wiping out your family.  While there is a lengthy courtroom sequence that attempts to address the legal issues, which in itself is unique, as we’ve rarely seen the German legal system in action, where not only the state is prosecuting, but the victims’ wife and mother is considered a co-prosecutor, using a conversational style that can be eye-opening for the uninitiated, yet this is the tool where society holds the murderous accountable for their actions, but due to an imperfect quality of justice, the system doesn’t always work.  Nonetheless the courtroom sequences are gripping, especially the back and forth sparring between the two opposing lawyers, Denis Moschitto and Johannes Krisch.

One of the more intriguing aspects of the film, and there are many, is the introduction of German actress Diane Kruger to a German audience, where she is largely seen as a model, not an actress, as she has never made a German-language film before.  Awarded Best Actress at Cannes, the film is primarily seen through her eyes, though this is no ordinary character study, as it doesn’t delve into her background or life history, but simply presents her response to the incendiary incident at the center of the picture, initially wracked with agony and pain, going through inconceivable personal anguish, made all the worse by the bickering and infighting between the family and in-laws, where she is blamed for poor mothering skills, allowing her child to be at work with his father and not taking care of him herself, then trying to hold it all together at the trial, unleashing a personal fury against the defendants at one point, as they refuse to even look at her, where viewers don’t ever really know her, but we certainly get an idea what she’s going through, as it’s written all over her face.  She’s a bit of a bad-ass, coming off as a biker chick, with a variety of tattoos, but we have no backstory.  The opening sequence is actually hilarious, as Nuri (Numan Acar), dressed in a white suit, is cheered like a soccer star that just scored the winning goal as he walks down the gangway of what turns out to be a prison, eventually entering an isolated room where his bride-to-be (Kruger) is all dressed in white.  The auspicious beginning is followed by a deluge of rain, as every single introductory shot takes place in a downpour, yet they seem to have a happy marriage, producing an adorable young son, who’s kind of a geek, but their lives are lost early in the film, where the rest is all about the ramifications, the various phases of grief, anger and outrage, holding out hope for justice, where it all takes place on her face, everything you need to know, culminating with a controversial flame-out at the end, though not nearly on the level of Antonioni’s Zabriskie Point (1970), yet equally as provocative.  Antonioni’s film was also trashed by the critics.  Akin is known for his brilliant use of music, and this film is no exception, though it’s more low key, downbeat, and even self-destructive as interpreted by Josh Hamme from the American band Queens of the Stone Age.  This time Akin has made a film of social conscious that rages against right-wing extremism with its own impassioned fury, showing how easily law enforcement gets sidetracked, reinforced by its own bias and prejudice, yet ultimately they’re what we’ve got to pursue criminal investigations and any hope of justice.  Not an easy film to deal with, exposing open wounds along the way, yet illuminating, especially the skewed angle of the final shot, turning the world upside down, actually imagining other, perhaps even worse, possibilities.  In the meantime, white neo-Nazi’s continue to be the most troubling of all the extremist movements, but overlooked because they’re not Muslim or ISIS, just part of the prevailing racist worldview that insists dark skinned terrorists are more lethal.  They couldn’t be more mistaken.
Posted by Robert Kennedy at 12:10 AM