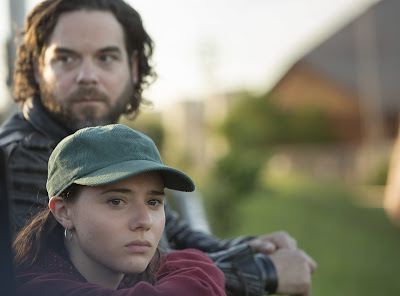 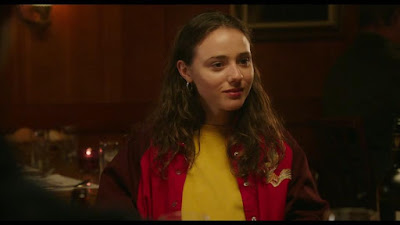 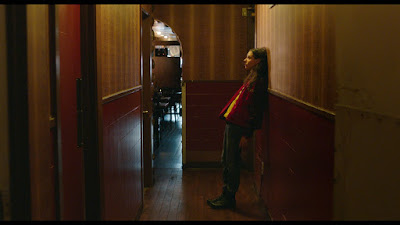 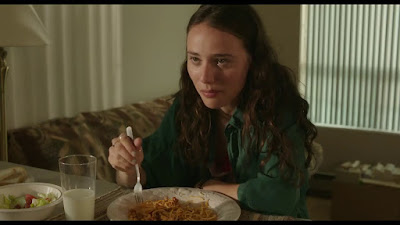 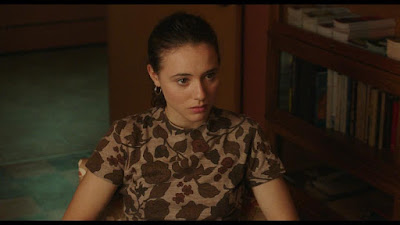 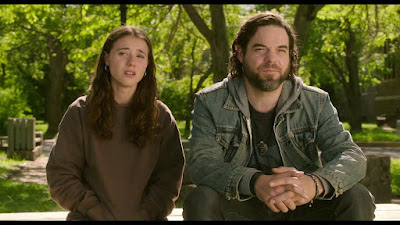 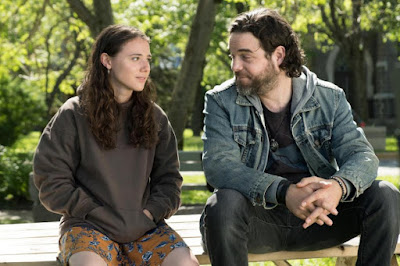 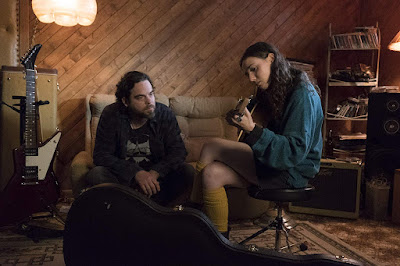 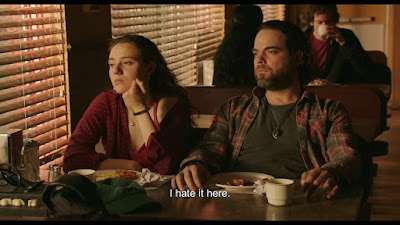 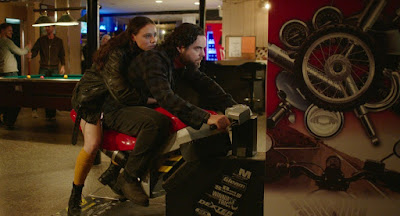 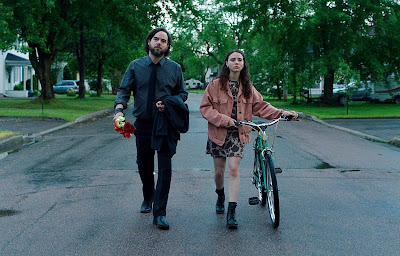 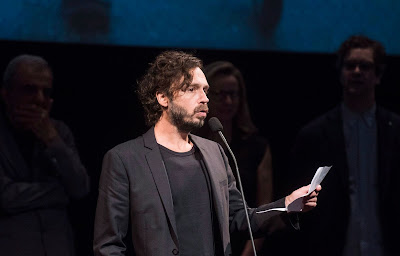 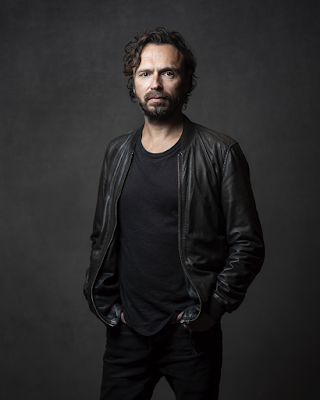 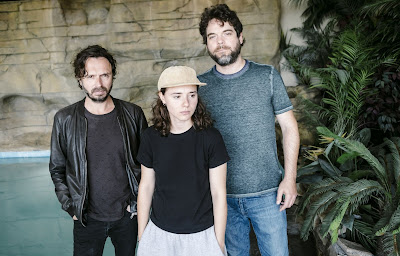 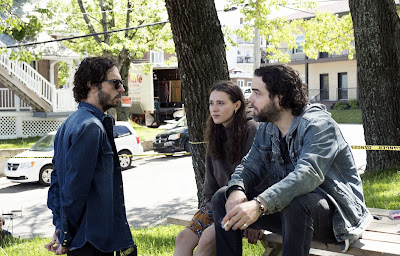 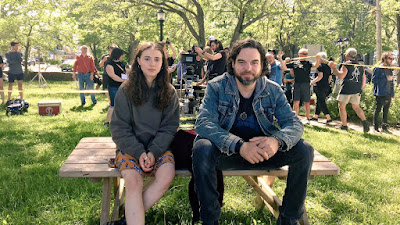 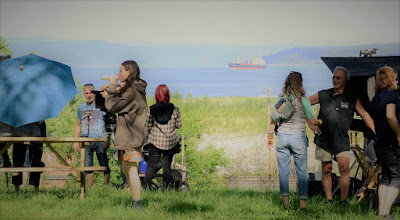 Actress Karelle Tremblay on the set with the St. Lawrence River in the background 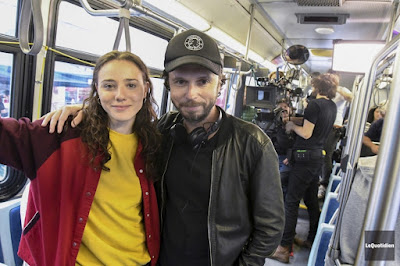 The director with his lead actress Karelle Tremblay 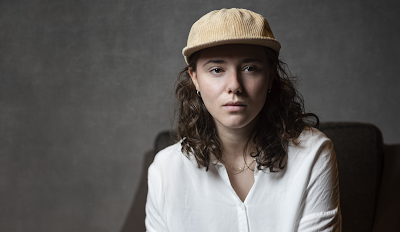 Dad says a bay can be looked at two ways.  One way it’s an opening on the world.  The other, it’s a dead-end.
―Léo (Karelle Tremblay)

Voted Best Canadian Feature Film at the Toronto Film Festival, “For its true-to-life depiction of a young woman’s quest to find meaning and hope in a world that has constantly disappointed her.”  Shot in Saguénay, Québec, the director’s own hometown, the film reeks with authenticity, depicting a small rural mill town set on a bay, where the closing of the mill is a constant reminder to the residents of this town of how quickly things can change and their lives can be upended, with the workers shipped up north to man distant factories for months at a time, only returning home sporadically for brief visits before being shipped off again, literally dividing and uprooting families, with little regard shown for the consequences.  The disaffection shown by the younger generation growing up is a good indicator of just how much things have changed, as Léo (short for Léonie), about to graduate from high school, feels family pressure of what lies ahead, but insists that the future is not something any young person wants to think about, ever.  Accordingly, when her family gets together at a restaurant to celebrate her 17th birthday, she defiantly slips out and meets up with her friends instead, showing little interest in her family’s fond recollections of her childhood, preferring to be out on her own.  There’s an interesting use of swelling orchestral ballet music in Philippe Brault's original score, like something out of Bernard Hermann, where Léo runs down the street and jumps on a bus much like a ballerina leaping into the awaiting arms of a man, where there’s a rush of energy as the bus pulls away, heading somewhere, anywhere.  Léo is angry at the world, at her parents, her school and the small Saguénay town where she lives.  Perhaps her biggest fear is the paralysis of standing still, sticking around in this dead-end town, which she despises, and dying a slow death of being suffocated by nothing ever happening.  She lives with a bourgeois mother she can no longer relate to (Marie-France Marcotte) and a thoroughly obnoxious stepfather she absolutely detests, Paul (François Papineau), a conservative, right-wing radio host who spews poisonous venom on the airwaves daily.  Left out of this family picture is her own father who she adores, Sylvain (Luc Picard), literally run out of town by her own stepfather, as her father was the union organizer trying to save the mill, while Paul is the loudmouth who railed against him on the airwaves, turning the entire town against him, ultimately blaming him for the shut down.  The Hamlet overtones are not lost on viewers, as all she’s left with is a ghost for a father, who’s never around, and a detestable stepfather odiously taking his place.

When the summer job she has lined up fails to materialize (working in the abbey kitchen to help feed the nuns, as the Sister that hired her unfortunately dies), she’s left with few options, forced to visit the office of a local politician who hands out summer jobs, a guy that worked with her father, where she’s forced to acknowledge, “We’re a family full of contradictions,” assigning her to the local baseball diamond, where she’s in charge of the lights for night games and maintaining the foul lines on the field.  Her first attempt placing chalk on the lines is a pathetic squiggly line that bears no resemblance to being straight, but she improves over time, allowing time to pass slowly through a musical montage of Arcade Fire, Arcade Fire presents Sprawl II (Mountains Beyond Mountains ...  YouTube (5:40).  Instead her carefree summer includes an encounter with an older guy she meets at the local diner, Steve (Pierre-Luc Brillant), a guitar instructor who’s ten years older, a kind of timeless guy, something of a loner, aimless and still living at home with his mother, basically hanging out in the basement, with little or no ambition, but so much more accepting of things than Léo, as he’s not constantly battling against the forces of an unfair world, but seems much more content with the way things are.  He offers a more laid back mindset without all the drama of the teenage dweebs she knows, so she signs up for lessons, which leads to a kind of romantic involvement with no real commitment on either side, yet there are a few sparks in the air, but neither one acts upon them, typifying the doldrums of summer.  Among their better scenes together includes a mysteriously baffling moment where Léo admires Steve, completely lost in thought, playing air drums to a Rush record, or allowing him to play an electric guitar solo performance to an empty baseball stadium under the lights, where three kids on bicycles show up to watch, but leave relatively unimpressed, or a moment in a pool room/video arcade where Steve goes off by himself to play a video game, so she plays the jukebox to get his attention, playing Tommie James and the Shondells, Crimson and Clover • Original • 1968 • Tommy James & The Shondells ... YouTube (3:26), then curls up next to him, holding his back, like riding on a motorcycle, laying her head on his shoulders, but he never once looks up or even notices, again, totally absorbed in his own little world.

Ah, now I don't hardly know her
But I think I could love her
Crimson and clover

While this has the look of a coming-of-age film, with an impulsive Léo moving from adolescence to adulthood, it may actually be more of a portrait of today’s Québec, offering a kind of cynicism that overrides all other hopes and aspirations.  The film title was taken from a Pasolini essay Disappearance of the Fireflies, Disappearance of the fireflies | Diagonal Thoughts, published in the Italian daily newspaper Corriere della Sera on February 1, 1975 in reference to the growing fascism in Italy, suggesting the light of truth was getting drowned out by the bright lights of mass entertainment and the deafening sound of political speakers adding their own toxic pollution into the air, false prophets spewing meaningless values and blatant lies into normal political discourse, creating panic and an overriding sense of fear into the comfortable middle classes which in order to protect themselves from the so-called perceived threats allows the fascism and repressive State power to come in and clean things up.  Léo’s childhood represents a state of innocence, like living in a cocoon, and as she grows out of this period she is exposed to all manner of hypocrisy and lies, none more profoundly toxic than the man who replaced her father, as he’s a false prophet riding a wave of populism, “The King of the Airwaves,” selling his views like a mattress salesman advertising an upcoming sale, planting racist values and cheap shots into the minds of his listeners, but taking no responsibility whatsoever if people are hurt by his commentary.   So as businesses are destroyed and families displaced, it paints a picture of the fleeting nature of things, where what’s most surprising is that the things that are disappearing were already forgotten by the time they disappeared, already vanished from our collective consciousness, replaced by something else that’s probably cheaper and near worthless, not even worth thinking about.  Who remembers all the things that are gone, that were once a part of our lives, having an impact on our developing character, now reduced to distant memories?  What’s most effective here is the meticulous care taken to provide such an accurate portrayal of a small mill town or factory town that has turned instead into a ghost town, as the money’s dried up and gone elsewhere, leaving a wasteland of cultural stagnation where a thriving community used to be.  As authenticity defines the film, there are no happy endings, or fanciful expectations, just a dead-end town with not just few, but literally no options.  Tremblay is a rising star in the role, spontaneous and energetic, filled with a fierce, rebellious spirit against the surrounding listlessness in a town that holds no value to her, none at all, and with every fiber in her body she wants to leave, to get out of town, hopping on that bus once again, going somewhere, anywhere, which is the only way she can keep from standing still.
Posted by Robert Kennedy at 12:03 AM