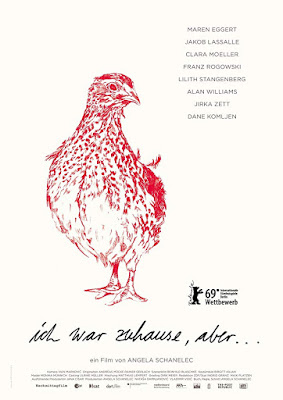 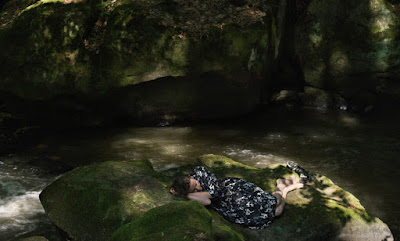 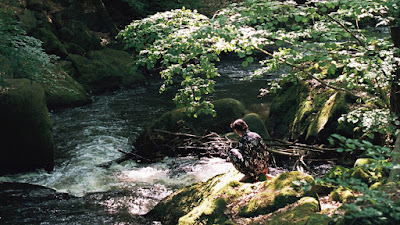 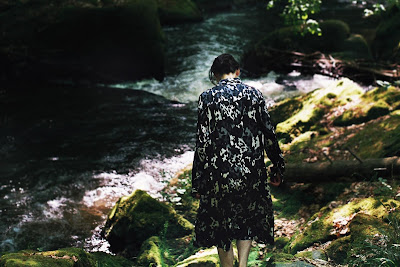 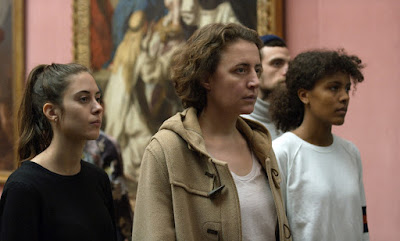 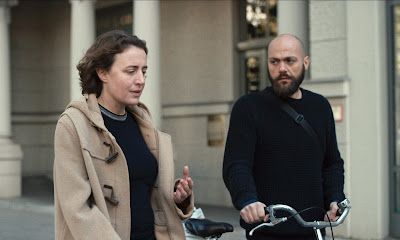 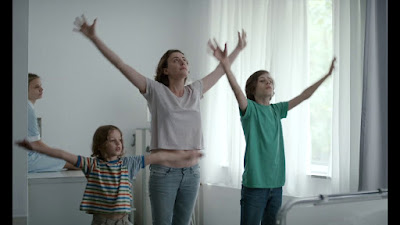 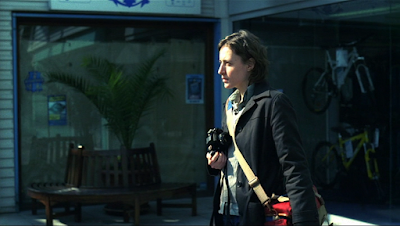 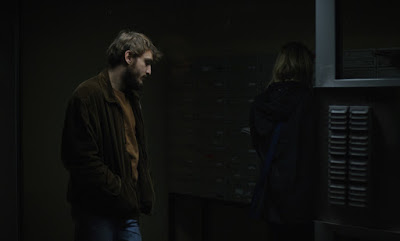 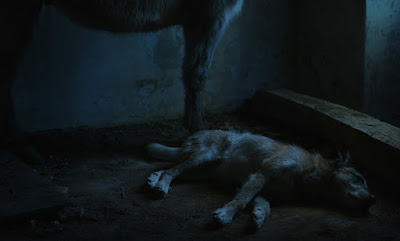 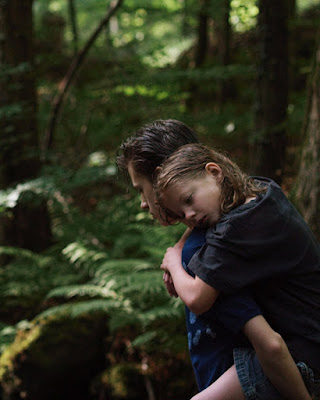 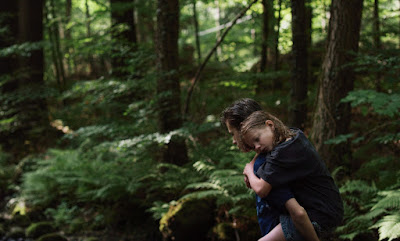 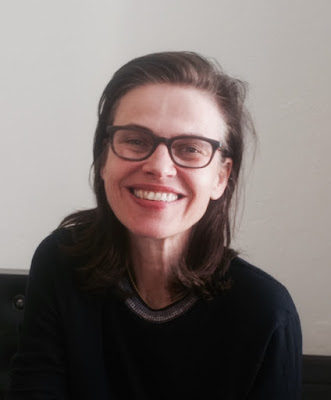 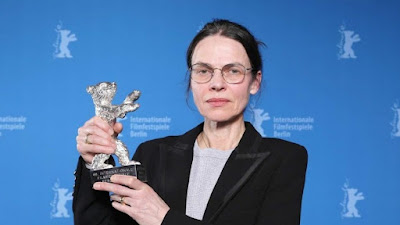 While this film won Best Director at the Berlin Film Festival, it’s not at all a pleasant experience, grim and relentlessly bleak, it refuses to offer audiences even a single moment of reprieve from the blisteringly harsh reality it constructs, leaving many exasperated, with more than the usual number of walkouts, as this is a rude awakening to experience.  Unconventional to the core and uncompromising, this is one of the Berlin School of filmmakers that most defiantly resists the mainstream.  However, that being said, this is a particularly brutal watch, bordering on Ulrich Seidl’s DOG DAYS (2001), which is itself a relentlessly disturbing look at graphic depictions of human cruelty happening within the milieu of the Austrian middle class, becoming a glimpse into the grotesque.  Lead actress Maren Eggert as Astrid seems pulled directly from that film, as downbeat as any character can be viewed onscreen, with her outrageously reprehensible behavior taking center stage, routinely saying things most of us wouldn’t even dream of thinking, as if there’s a brain circuit loose or an emotional connection altogether missing, but she’s as high maintenance as they come, continually spewing obnoxious verbiage like it’s an ordinary matter of routine.  There’s really no place in the film for audiences to grab hold of, leaving viewers on a high-wire without a net, automatically subject to a series of disastrous falls, where you’re living in a constant state of elevated purgatory.  Not sure why it has to be this way, but these are the director’s ground rules, creating a kind of free-form, expressionless void, removing all life-jackets, subjecting the viewer to a neverending series of trauma, where making people feel as uncomfortable as possible may be one goal, but another is keeping them in that state for a prolonged period of time, twisted methods that more closely resemble torture tactics.  As a piece of provocation, the film is not really successful, as it drives away at least as many people as it may excite, though the boldness of the near experimental form is impressive.  The degree of emotional detachment and intellectual disassociation in this film is overwhelming, as there’s really very little one can actually relate to in a single viewing, and that would probably be quite random, so the question is will any of this endure, will it be remembered, or easily forgotten in a myriad of movie watching.  To that degree, the film feels entirely temporary, short-term, very much in the moment, but easily discarded.  One will not be waiting with bated breath for the DVD release.

It’s at least ten minutes into the film before a single word is spoken, using a choreography of animals that mostly stand around in a state of inertia, a theme that opens and closes the film, likely paying homage to but lacking the poetic transcendence of Bresson who accomplished the impossible with Au Hasard Balthazar (1966).  The human element is emotionally disconnected and weirdly disaffected, showing little connection to the characters, many of whom simply disappear without a trace, where there’s no real storyline, yet some characters keep reappearing, members of the same family, yet their relationship among themselves and with others is a bizarre study of human behavior.   Told in a fragmented manner, what story there is (which is extremely difficult to comprehend) comes down to this, the mother, Astrid, has two children, Phillip (Jakob Lassalle) and Flo (Clara Möller), who live a life filled with trauma and grief after the death of their father (her husband), which may have occurred several years ago. Phillip, for instance disappeared for a week, returning caked in mud, with an injured toe that requires amputation, sending his mother into a state of hysteria from which she never recovers, yet throughout the film the protective bandages come unraveled, or he picks it apart, leaving the wound infected, having to re-wrap it with the bandages trailing behind as he walks.  Phillip is also preparing for the part of Hamlet at his grade school, reciting passages endlessly without a hint of expression, making it feel tedious and heavy, as the words drone on with no meaning behind them, an example where language becomes dead and empty.  Astrid also decides to purchase a second-hand bicycle from a man who can’t speak without a voice-box, but becomes thoroughly disenchanted with it afterwards, returning it, asking for her money back.  He patiently agrees to fix whatever’s wrong with it, as he’s spent the money, but she’s convinced it is junk and that she’s been swindled.  While that doesn’t appear to be the case, he agrees to pay her back in a week’s time, which he apparently does, yet she’s not convinced of his trustworthiness, suggesting his words have no meaning.  Astrid arrives at school to complain about the mistreatment of her child, yet loses her train of thought, only to thank them for their efforts at the end of a long and rambling monologue that is filled with confusion and stifled emotions.

Easily the most devastating moment occurs when Flo tries to make her mother pancakes, but leaves a mess in the kitchen, which simply sets her off, growing deliriously angry at them both, screaming wildly, growing more and more out of control, furiously scrubbing what she can from the mess, with Flo trying to help, but that only enrages her more.  Her violent response is a clear overreaction, as first Phillip and then Flo attempt to put their arms around their mother, but she refuses any solace and instead continues haranguing them for what were really good intentions.   Astrid is certainly in the running for worst mother ever.  In another scene, when a boyfriend comes to visit, she angrily kicks her children out of the house, screaming at them to leave (seen sitting at the bottom of the steps, having no place to go), which doesn’t seem to faze this man at all, who is seen sometime later as a tennis instructor, offering lessons for one of the children.  In another sequence Astrid is seen swimming laps at an indoor public pool, with Flo standing alone futzing with her bathing suit.  But as Astrid climbs out, feeling exhausted, she sits on a nearby bench, with Flo sitting down next to her giving her mother a hug, which is curiously ignored.  There’s a weird scene of Astrid throwing herself at her dead husband’s grave, just lying there, as a bird appears to offer her company.  In what may be a flashback, she and the two children perform an extremely cute dance for what appears to be the ailing father at the hospital when he was alive, memorably performed to M. Ward - Let's Dance - YouTube (5:01), where the outright joy juxtaposed against a particularly downbeat vibe is truly compelling.  In a parallel story that goes nowhere, but may more aptly reflect what’s going through Astrid’s mind in hindsight, a couple argues over whether or not to have children, where Lars (Franz Rogowski), one of the school teachers, wants a child, afraid of disappearing while leaving no trace of his life, while Claudia (Lilith Stangenberg) insists she can’t be anyone’s mother or wife, as her mission (which makes little sense) is to remain alone and be lonely forever.  For a discussion about children, this feels fairly drastic.  Even more exaggerated is the enraged one-way discussion that occurs when Astrid confronts a filmmaker on the street (Serbian director Dane Komljen), claiming she only watched the beginning of his movie before walking out, going into detail about how she found it phony and artificial, describing it as “unbearably bad cinema,” how it was a waste of everyone’s time, leaving the director somewhat dumbfounded, yet he politely hears every word before they amicably depart.  This autobiographical aspect of the film is quite amusing, poking fun at the inevitable walkouts of her own film, offering her own stinging rebuke of criticism that this film heartily deserves.  Interesting that she knows it, but does it anyway, suggesting one can criticize the form and content, but one should never question the heart of an artist.
Posted by Robert Kennedy at 12:01 AM