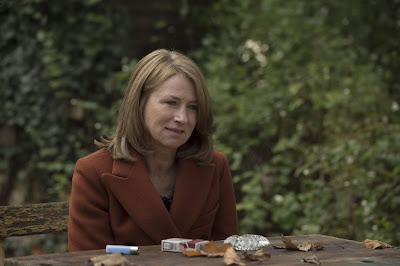 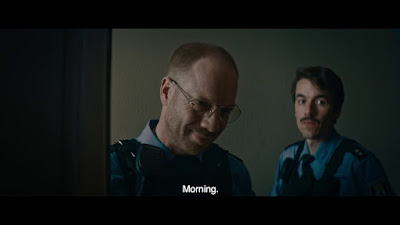 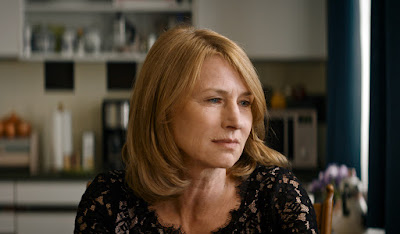 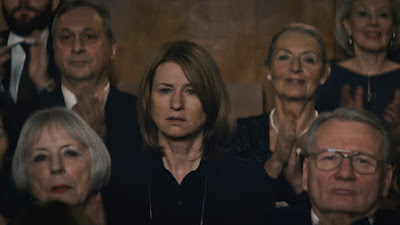 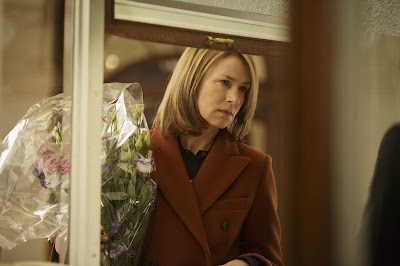 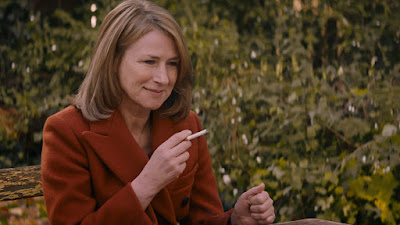 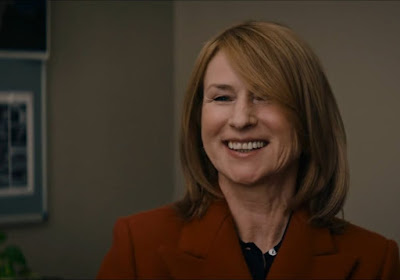 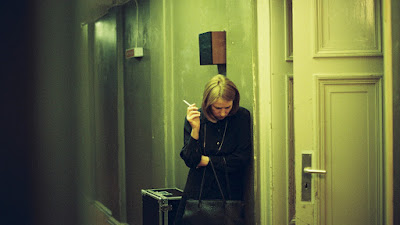 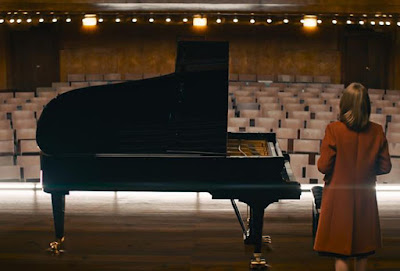 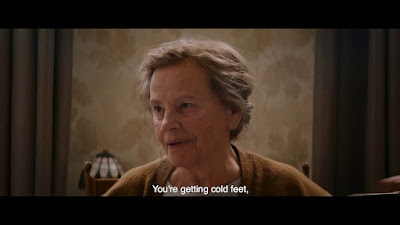 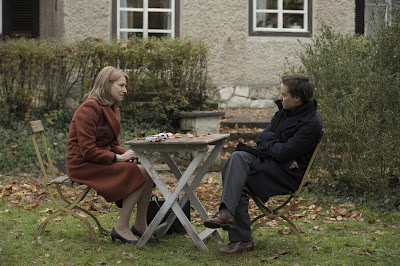 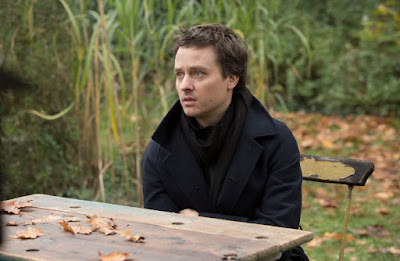 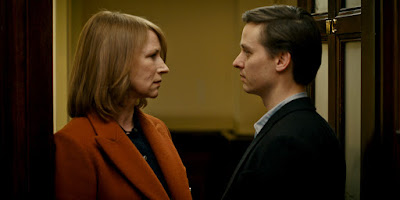 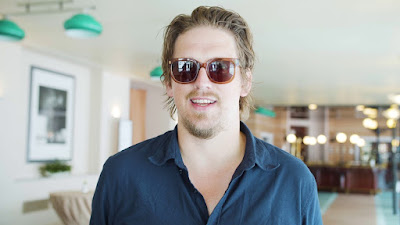 A rather morbidly intense character study of an arrogantly domineering, middle-aged woman on her 60th birthday who instead of celebrating with her family or a party of friends becomes an object of derision in the eyes of many, largely due to her own ego, errors in judgment, and her own self-inflicted mistakes that have monumental consequences.  Played to perfection by Corinna Harfouch, we have seen variations of this woman before in Isabelle Huppert’s more extremist role in Michael Haneke’s The Piano Teacher (La pianiste) (2001), and again played by Ingrid Bergman in Ingmar Bergman’s somewhat dour family affair in Bergman, Two from the 70's: Autumn Sonata (Höstsonaten) (1978).  Overbearing women used to getting their own way, often by sheer intimidation, these are not likeable people, yet they rise to positions of authority where they can use their power and ambition to reduce others to sniveling cowards, afraid to take her on, giving way out of self-preservation rather than reason, often leaving their families in shambles.  Arrogance doesn’t begin to describe Lara, who views herself as ruthlessly efficient, expecting the same effort from others, sneering at their weaknesses, holding them in contempt.  What this film reveals is that it’s all bluster, a defense-mechanism, as inside her own soul is an empty shell of a human being, someone who’s fought for so long to get to the top that she’s driven away all her family and friends, leaving her lost and alone, refusing to acknowledge the truth about herself, instead continuing to aim her wrath at others, as if justifying her moral righteousness.  This film is her day of reckoning as she gets her comeuppance, though she’s constantly reminded that it’s her birthday, with people asking if she’s enjoying herself, yet it plays out in elegant fashion, where she persists in holding herself above others even when it produces humiliating results, so set in her ways and so sure of herself that she feels invincible and unbreakable, refusing to give an inch, but this stubborn behavior will be her undoing, as what it masks is the saddest realization of all, that she’d rather be right than supportive or even loving when it comes to her own family, proclaiming herself the expert in all things, authoritative, even when she doesn’t know what she’s talking about, becoming an empty vessel by the end, having burned all her bridges.

The opening few moments are sketchy, as Lara opens a large bedroom window in the early morning hours, placing a chair underneath, suggesting she’s about to jump out of her high-rise building and end it all, but a ring at her door alters her destiny, allowing the story to take a different turn as two young cops need an official witness of a drug search in a neighboring apartment, and though she’s retired, she hears a chorus of “Once a civil servant, always a civil servant.” Quickly getting dressed, she hears herself referred to as “the old hag” on police communications, then basically suffers the indignity of having to watch a neighbor’s apartment searched under her watch, as if she’s somehow a co-conspirator, leading to some rather crude comments from the affected son who they suspect is dealing drugs.  The director has a habit of slowly releasing bits and pieces of information about Lara as we follow her step-by-step through the next 24-hours of a single day, having a much better understanding of her afterwards.  From the neighbor’s father we learn Lara’s son used to live with her and played the piano, but he’s moved out.  Her first stop is withdrawing all the money out of her bank account, an ominous sign, yet she spends it frivolously, buying a cocktail party dress that’s much too tight and uncomfortable, but she’s fawned over by the sales clerk, convincing her it will do her wonders, but she casually discards it in a public bathroom not long afterwards.  She also visits a concert hall selling tickets for that evening’s concert with Viktor Jenkins, buying the remaining 22 tickets, even though they are near the back of the hall.  Armed with those tickets and her life savings, she proceeds into a coffee house, giving tickets away to strangers she meets, as if by chance, anyone she happens to strike up a conversation with, which is the pattern that follows throughout the film, including a visit from an attractive young girl (Mala Emde) carrying her violin case who claims to be her son’s girlfriend, the same Viktor Jenkins performing that night, but hasn’t heard from him in a while, seeking advice about what to do, but is met with a barrage of crude comments that make her race to the rest room, visibly upset, leaving her violin subject to sabotage in a remarkably cruel act.  She visits a concert hall practice facility, searching for a Professor Reinhoffer, her old music instructor, but discovers a student alone playing video games on his phone as the professor has gone out for some air.  Deciding to wait, she asks the student to play for her, growing demonstrably critical, demanding something from the kid that he just doesn’t have, eventually refusing to play another note, creating a silent paralysis until she gathers her things and leaves.  A heartless cruelty seems to emanate from her wherever she goes, with whomever she meets, like a dark cloud hovering over her.

Persistently calling her son on the phone, she grows irritated when he doesn’t call back, so she pays a visit to her mother (Gudrun Ritter), perhaps hoping to find him there.  Her mother is quite candid about how Lara drove him from her home, leaving her friendless and alone, while also revealing he’s quite comfortable here, as she makes no demands on him, providing a loving and nurturing atmosphere that he seems to thrive upon, allowing him to excel in his profession, so he doesn’t need her meddling in his business on such an important day when he’s premiering a brand new composition.  Her ex-husband (Rainer Block) made similar remarks to her when she searched for him earlier, both shielding this young prodigy from his domineering mother, whose excessive demands on him are notorious.  Having little else to do, she wanders through the home into Viktor’s room, discovering the sheet music for his composition, which she examines just as Viktor (Tom Schilling) arrives.  He’s a tender-faced young kid, gracious and exceedingly polite, nothing at all like his mother, but the two finally sit down and have a chat, which initially goes well, until he asks what she thinks of the composition, as he saw her studying it in his room when he arrived.  Hesitant initially, she gives a polite answer, which he seems to accept, but then has to add what she really feels, worried that he’s getting away from the piano, his true gift, as there’s so much piano literature to explore, believing he’ll get sidetracked through compositions, as many artists end up composing because they’re not good enough performing, suggesting the opening passage, for instance, sounds “affected,” which sends him reeling into an indecisive swoon, wondering why she would tell him this just hours before the premiere.  Seen later giving away tickets just outside the box office to appreciative fans, with talk of having drinks afterwards, she then sits among them as well, but there’s an announcement of a program change, as the composer’s premiere composition has been replaced by a piano concerto.  During the intermission, Viktor’s father can be heard offering encouraging words, while Viktor remains in doubt, wondering if his mother is right, but he finally does perform it in the second half, though Lara gets up in the middle and wanders alone through the corridors, consuming several drinks, eavesdropping on the comments afterwards before heading backstage where her son is receiving nothing but effusive praise, especially for that opening passage which a noted music critic found remarkable.  While Viktor’s mood elevates, Lara’s sours, drinking heavily at the bar across the street, getting wobbly on her feet, but the most embarrassing moment is running into her son just outside the rest room, neither uttering a word to the other.  Her descent complete, she retreats to her abode, and like the opening, we see her open that window to the open air below, but that would be too easy, as more tragedy awaits, thoroughly consumed by her obsessive drive to realize her dreams through her son, which never happens, but in the process she allows her own dreams to die, which doesn’t fully sink in until the final shot.
Posted by Robert Kennedy at 12:03 AM