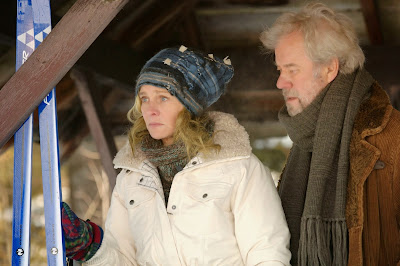 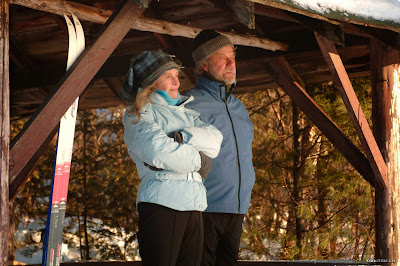 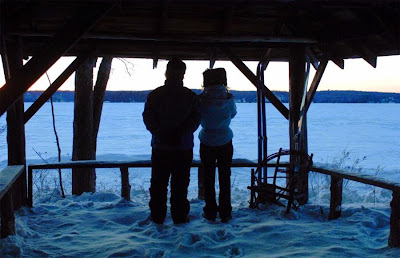 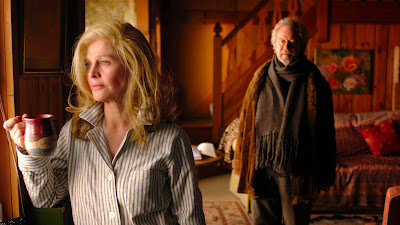 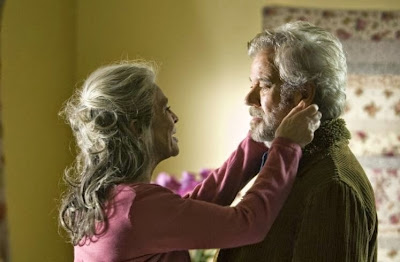 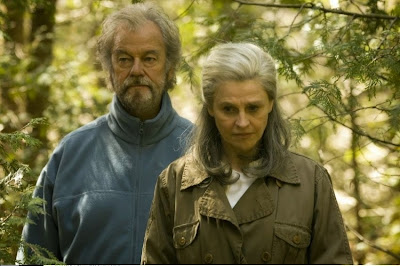 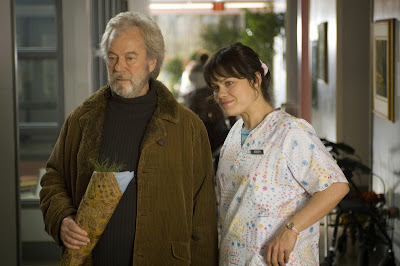 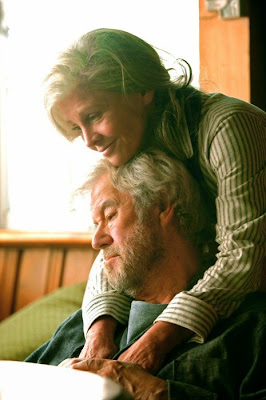 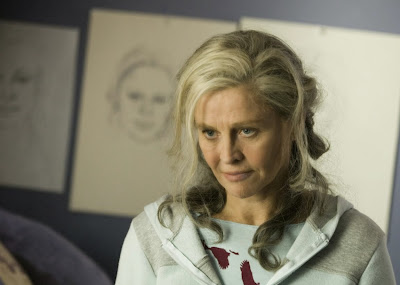 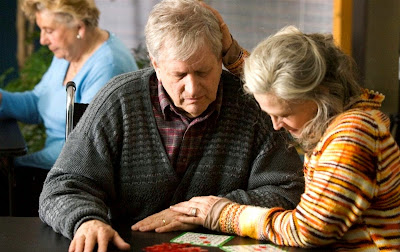 Scenes from a marriage that play out like a Bergman chamber drama, filled with somber chilly undertones and brilliant performances from the leading actors, the resplendent Julie Christie who, as a member of the hospital staff points out, is still “a lady,” elegant and regal, smart and inquisitive, delivering one of the most powerful performances of her career, vulnerable yet always eloquent in her manner, and her husband Grant, Gordon Pinsent, an Erland Josephson stand in with the same beard, a retired English professor with a stern countenance, a stodgy old guy who taught Icelandic myths, always with a bit of frostbite in his look.  The two live on a cabin overlooking Lake Ontario where they enjoy cross-country skiing until one day Fiona (Christie) can’t remember her way back, a telling sign after several earlier signs all leading to the same truth, that she’s suffering from Alzheimer’s disease and needs long term care, announcing at a dinner party “I think I may be beginning to disappear” after she can’t remember how to pronounce the word “wine.”  After visiting Meadowlake, an upscale assisted living facility, Grant is devastated, expressed in an excruciating time lapsed scene when the residents are sitting around with their families, all crowded into a common room, but one by one the various family members disappear, erased from the image, leaving the residents isolated and alone, distraught and helpless, all common themes in the film.  Grant doesn’t like the place, but Fiona is wise enough to realize they’ll never find the kind of place they like, but this one will do, as what she really needs is a place where she can retain some sense of grace.

Adapted by the director from the Alice Munro short story, “The Bear Came Over the Mountain,” the film flows in intersecting threads, each intercutting the other, using brief flashbacks as well as spoken reflections from earlier times, all of which feed into the present, which is rapidly deteriorating.  The observant nurse, Kristen Thomson who is nothing less than a revelation in each and every scene, cheerful and helpful in every respect, empathizes with the family, whose time and visits are only fleeting, making it difficult to let go, a contrast to the staff administrator who is stiff and artificial, always remaining aloof from it all while enforcing the Meadowlake policy that forbids visitors of any kind for the first 30 days, allowing the residents time to settle in and discover their own comfort zones.  When Grant returns, she’s transferred her feelings of affection to one of the other residents, a nearly unrecognizable and uncommunicative Michael Murphy, who is confined to a wheelchair, the two becoming inseparable, treating Grant like a pestering visitor who won’t leave them alone.  Again, Grant who was never comfortable with the idea of bringing her there, becomes even more flabbergasted, feeling more alienated than he could ever imagine, as if forces were conspiring against him, believing she may be punishing him for a long since past indiscretion which may now be the re-prioritized focus of her attention.  Despite being heavily racked in guilt, he keeps visiting, trying to maintain his 44-year marriage, but he blends so comfortably into the background that one of the other visitors just assumes he’s a lonely resident without any visitors.  In an unusual scene, using humor to assess emotional devastation, one patient is a former hockey play-by-play announcer, who offers his amusingly unstoppable play-by-play commentary of his experience being whisked down the hall, interjecting upon seeing Grant hiding his face against a wall, “There’s a man who is heartbroken, his heart broken into a million pieces,” before continuing his monologue.  Throughout this ordeal, the role of the nurse takes on greater impact, where she possesses a kind of down-to-earth realistic clarity that Grant lacks, where all his education brings him no closer to grasping the effect of his sudden insignificance in his wife’s life.  There’s a wonderful conversation between Grant and the nurse when he realizes that much of what he previously felt mattered now feels so superficial, aware that what was a comfortable distance between them now feels like an insurmountable gulf.  This event is eerily similar to childbirth, only with an agonizing grief of loss instead of the joy of the newborn, where your life suddenly feels small and secondary to the more pressing needs of this “other.”

While there are no startling directorial innovations or lapses, there are repeated motifs, such as the director’s preference for close ups, some lit in a glowing white light that suggests transcendence, hospital corridor sequences utilizing slow tracking shots that follow the eyes of a visitor, or an overhead camera looking down on inhabitants in bed, a similar Atom Egoyan device (a producer on the film), while most of the film takes place in the slow frozen chill of winter.  While there is a beautiful and tender use of K.D. Lang singing Neil Young’s song “Helpless”Away from Her & Helpless - YouTube (4:10), this is not a film with attention-grabbing fireworks or melodrama, but instead respects the slow descent into forgetfulness, where the dignity of the characters is maintained throughout.  There are wonderful literary passages Grant reads to his wife, with his eloquent, perfectly enunciated words, which adds a bit of poetic reflection, not to mention an appreciation for the written word, which after all is the sacred tool of communication.  Without it, we are all at a loss, caught in the emptiness of an unending void.  Even the Apostle John from the New Testament of the Bible recognizes this epic significance, “In the beginning was the Word.”   This film is a different kind of journey, one with no real political or religious message, but is a human story that anyone can understand, as it respects the ties that bind us together, the memories, the shared lives, an assembly of lifelong experiences.  So when all that suddenly vanishes and disappears without a trace, what are we left with?  How do we continue to know each other?  Anyone who’s ever visited the elderly in hospitals or nursing homes knows just how lost they can become from the rest of us.  How do we keep them from slipping away?  Of course, it’s “our need” to hold onto them, while in the later stages of life it may become “their need” to let go.  It’s a daunting distinction swallowed up in a fragile and ever elusive realm that is largely outside all human comprehension, and therein lies the unexplored territory that is the unusual focus of this highly intelligent and quietly tender film.
Posted by Robert Kennedy at 12:26 AM