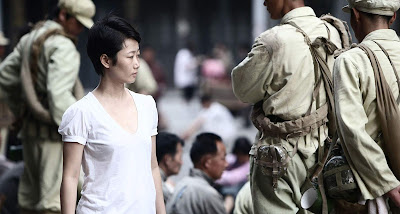 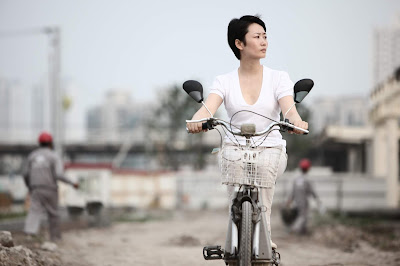 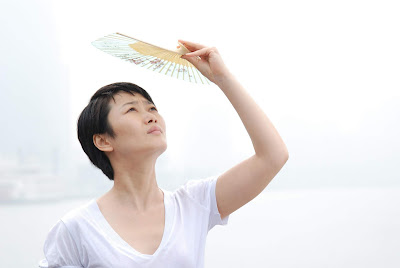 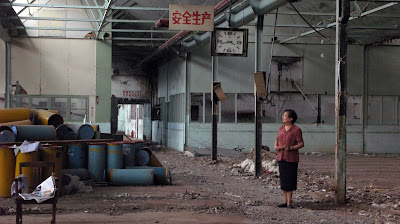 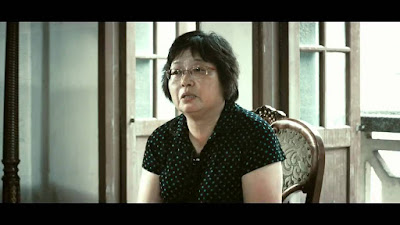 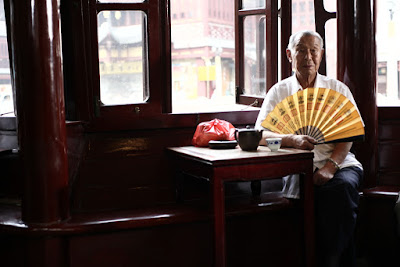 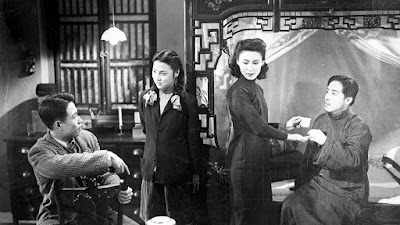 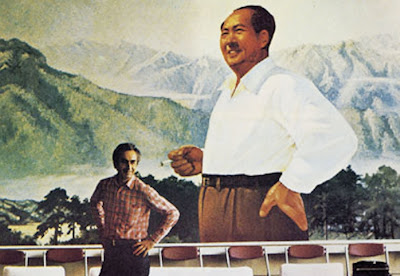 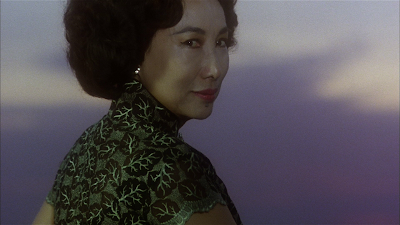 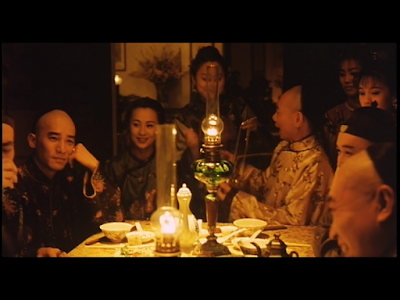 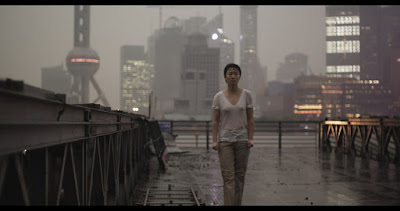 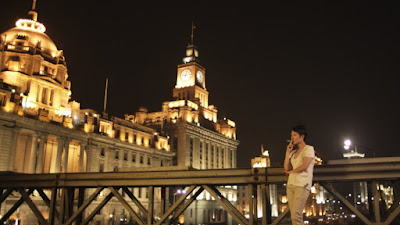 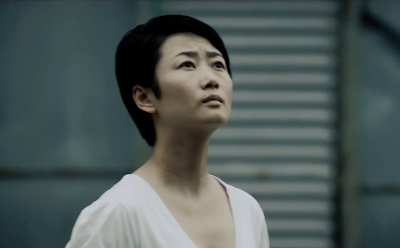 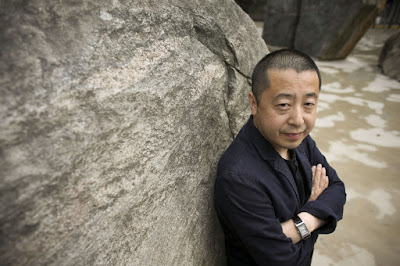 If you don’t care, why let me hope and pray so?
Don’t lead me on, if I’m a fool just say so.
Should I keep dreaming on, or just forget you?
What shall I do, I wish I knew.

Premiering at Un Certain Regard at Cannes ten years ago but never released here, this film has a belated distribution with a slightly shorter edit, an extremely poetic time capsule made in coordination with the upcoming 2010 World Expo in Shanghai, commissioned by the Expo’s planners, as Jia explores and re-evaluates Shanghai’s identity as transnational, unstable and in constant flux, drawing a connection between the historical and contemporary setting, inquiring about the history of the city by speaking to older, influential people whose lives were shaped there, heard describing their family memories, revealing how the city affected their often shattered lives, delivering a personal meditation on China’s recent past.  Initially interviewing over 80 people, it is cut down to only 18, very rich in detail, with the same sense of urgency as Jia’s majestic film STILL LIFE (2006), using an elder generation for historical purposes, as they lived in an Old Shanghai that no longer exists, having transitioned to a modern global city, yet an essential component of the film is capturing their memories before they fade away, as their personal testimony is as revealing as it is riveting, providing a collective living history that often deviates from official accounts, describing an era of assassination and revolution, pitting Chinese against one another in a civil war, where the military leaders were familiar with one another, having attended the same military schools, now divided strictly on political grounds, where the cost of Mao Zedong’s People’s Liberation Army victory over Chiang Kai-shek’s Nationalists was enormous, resulting in a fractured nation and constantly changing Chinese identities.  Perhaps the most revealing were open discussions about the impact of the Cultural Revolution, where the city was a stronghold of radical leftism, requiring mandatory confessions on what was perceived as counter-revolutionary activity, which included family migrations to Taiwan and Hong Kong, often for safety purposes to avoid arrests and political persecution, but these visits had negative repercussions long afterwards, as the state was interested in the reasons for leaving Shanghai.  Using clips from older films, while speaking to artists associated with those films, Jia cleverly interweaves images of past and present-day Shanghai, suggesting the thriving film industries in Taiwan and Hong Kong were nurtured by Shanghai refugees who fled the mainland during the Communist takeover.  Omitted, however, are the films of Stanley Kwan, a Hong Kong director whose historical pieces set in Shanghai are legendary, Center Stage (Yuen Ling-yuk) (1991), Red Rose, White Rose (Hong mei gui bai mei gui) (1994), or Everlasting Regret (Changhen ge) (2005), where the latter film is set through different historical periods spanning some fifty years from the 30’s to the 80’s, and is as much a love story to the city of Shanghai as to the people whose lives passed through there, where the roving eye of the camera curiously becomes an unseen character.  In much the same manner, Jia links his connecting pieces with an anonymous character portrayed by his wife, Zhao Tao, who never speaks, dressed all in white, walking through the contemporary city as an eye witness, sailing through the seemingly interchangeable straits of both Hong Kong and Shanghai, gazing upon the futuristic architecture or the muddied Expo construction site filled with workers in hard hats, where streets still under construction reveal demolished buildings, vacated lots, and newly renovated neighborhoods, with Zhao soaking it all in, mirroring the perception of viewers watching and evaluating this film.

Early on, a woman tells the story of her Communist father’s execution at the age of 24, ordered by Chiang Kai-shek just before Shanghai was liberated, now a little known revolutionary martyr, an event that happened shortly before her birth, recorded by a Hong Kong journalist in black and white photos, where the last image moments before execution is described as a brave revolutionary with a fearless smile.  “I only know my father through these images,” she tearfully reveals, recalling that her mother went a little crazy afterwards, running alongside the Communist troops when they entered the city in 1949 still searching for her dead husband, much like the wives and girlfriends of lost or missing German soldiers greeting each incoming train to Berlin in Fassbinder’s THE MARRIAGE OF MARIA BRAUN (1978).  This personal recollection of family heartbreak is contrasted by propaganda images from the Wang Bing film TO LIBERATE SHANGHAI (1959), featuring deliriously happy crowds greeting victorious Communist soldiers, red flags waving, with an officer proudly declaring, “The liberation of Shanghai marks the complete smashing of imperialist forces in China!”  In accordance with the revolutionary fervor, Jia speaks to textile worker Huang Baomei, who recalls being called into an ordinary factory plant meeting and being floored to see none other than Chairman Mao Zedong present, congratulating her on her profession, as the nation was relying on her for clothing, becoming one of the “model workers” in a 1958 film by Xie Jin where she plays herself in a film named after her, becoming the face of the Great Leap Forward, emblematic of a patriotic Socialist working class heroine and a household name in Mao’s China (occurring simultaneously to the great famine when millions starved to death), spending decades in the same factory, now seen shut down and empty (with songs of union solidarity faintly heard offscreen), an abandoned relic of what it once was.  Wang Toon, director of the Taiwanese film RED PERSIMMON (1966), reflects on his childhood recollections of fleeing Shanghai as the Communists closed in on the city, where the chaos surrounding a departing ship to Taiwan was so severe his grandmother had to tie together ten children to prevent them from being lost in the swelling crowd.  Other elderly Shanghai residents stranded in Taipei since 1949 are interviewed as well, offering their experiences, including legendary Taiwanese filmmaker Hou Hsiao-hsien, interviewed on a train crossing through the mountains, recalling similar imagery from Dust in the Wind (Lian lian feng chen) (1986) while also showing brief moments from the luminous introductory scene from Flowers of Shanghai (Hai shang hua) (1998), where he expressed great curiosity about returning to the city to shoot the film, describing how prominent arranged marriages have been throughout Chinese history, with little concept of love, yet was excited at the prospects of opening up 20th century floodgates for romance, also showing clips from Hong Kong director but Shanghai-born Wong Kar-wai’s DAYS OF BEING WILD (1990), where actress Rebecca Pan plays an aging Shanghai refugee.  Speaking to the director, Ms. Pan is herself the daughter of a Shanghai woman who fled to Hong Kong in 1949, choking back tears as she describes her mother’s plight, seen singing bits of a song she recalls, perhaps the title song of the film.  It’s curious how these other cities of Taipei and Hong Kong play a part in Shanghai’s legendary history, but Jia’s film does a formidable job connecting them all to one another, as that’s something not seen in other films with this degree of complexity.  According to film historian Tony Rayns (Currency | I Wish I Knew (Jia Zhangke. China) - Cinema Scope, who provided the English subtitling for the film, “these Taiwanese voices have never been heard in Mainland China before.”

Wei Wei, the heroine in Fei Mu’s SPRING IN A SMALL TOWN (1948), describes the dismissive hostility on display from the city while shooting the film, eventually fleeing to Hong Kong afterwards, while the director’s daughter, Fei Mingyi, also describes how political unrest was so severe that the family also fled to Hong Kong, believing at the time it was only temporary, but the situation altered drastically, as Fei Mu’s reputation was ruined, vilified by the Communist Party, dying in exile only a few years later in 1951.  The film was ultimately banned for many years in China, but over time is now considered one of the greatest Chinese films ever made, voted # 2 in a 2019 poll conducted by Time Out Shanghai, The 100 best Mainland Chinese films - Time Out Shanghai.  When Italian director Michelangelo Antonioni came to China during the Cultural Revolution in 1972 to make a documentary film CHUNG KUO – CINA (1972) about China at the invitation of Prime Minister Zhou Enlai, he was welcomed with open arms to make a 4-hour film that Western viewers found sympathetic, where we hear the story from a Shanghai TV journalist that accompanied him around the city, surprised by what he felt were “backwards” images, believing it was not featuring the positive aspects of China’s resurgence.  When the film was released, providing a somewhat detached, neo-realist view of daily life (as is Antonioni’s style), it was instantly denounced in the People’s Daily, claiming Antonioni had “evil intentions,” labeled a counter-revolutionary, claiming he had defamed the image of a new China, setting off nationwide criticism (Repudiating Antonioni's Anti-China Film), officially banned by the Gang of Four, not shown in China until a 2004 screening at the Beijing Cinema Institute, and roundly condemned by people who never saw the film, including the journalist who was himself punished, losing two years of his life suffering his own political persecution, forced to attend self-criticism sessions.  Of note, China offered a public apology to the filmmaker in 1980.  Ironically, this Jia film received much of the same criticism in China, claiming it didn’t capture the boldness of the city’s colors, but much of that can be attributed to his use of a digital camera, lighter, and easily transportable, making it easier to move around with ease.  The film supposedly lacks contextualization, according to the critics, as there are no archival photos of Old Shanghai, and the director fails to provide revolutionary sentiment.  Largely overlooked at the time of its release, what critics failed to comprehend was the depth of humanism provided by those interviewed, as it’s their life stories onscreen that vividly encapsulate distinct moments in Chinese history, providing a tragic and sorrowful assessment of what it was like to live during historical times, describing the ordeals of parents and grandparents as told by the family survivors, where oral history is akin to Vertov’s symphony of voices, finding universal themes of displacement, lives uprooted, families split apart, providing innovative editing techniques showing a city under massive construction, but also under the influence of Hong Kong and the nation of Taiwan, revealing how they are all interconnected, as an ancient city is transformed into a modern metropolis seemingly overnight, revealing a natural progression from then until now, with younger people featured more towards the end.  The continual presence of Zhao Tao onscreen is significant, giving voice to the voiceless, a bystander on the threshold of history, becoming a stand-in for all the citizens of Shanghai, as it’s not just about those 18 voices.  Jia’s film construction is a composite of many forces working together, showing great insight in challenging the official explanation of history which has been appropriated by the Communist Party, with evocative music by Lim Giong, becoming an impressionistic mosaic of art and journalism, uniquely allowing viewers to make up their own minds about the human toll exacted by progress.

Posted by Robert Kennedy at 1:30 AM