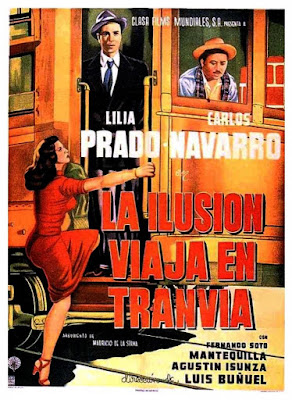 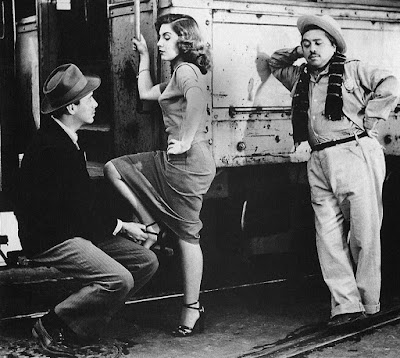 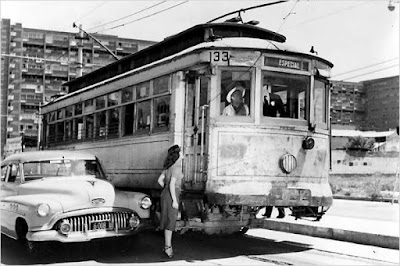 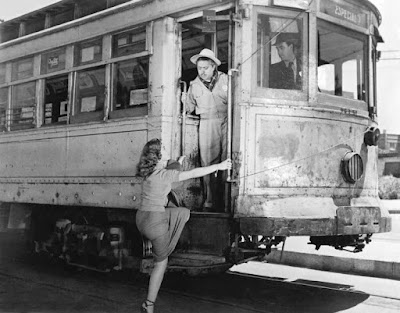 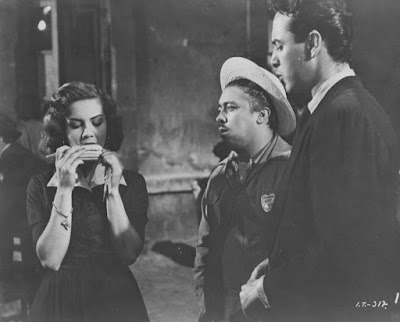 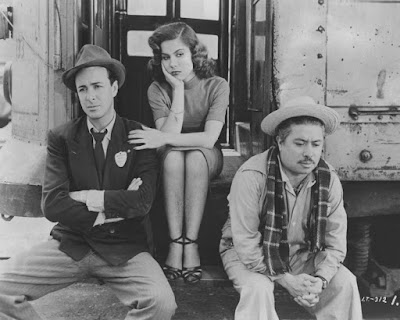 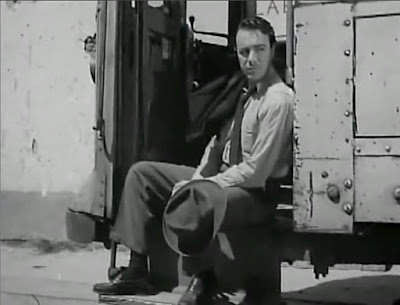 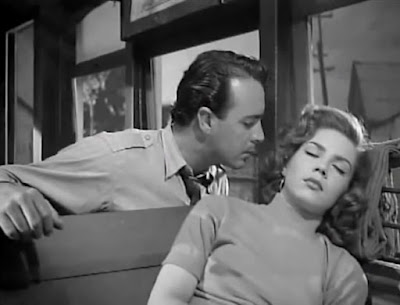 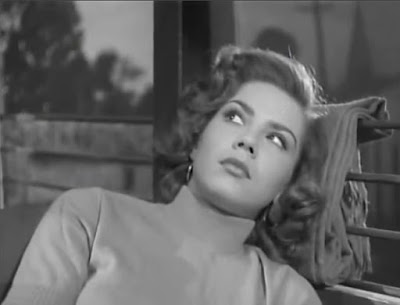 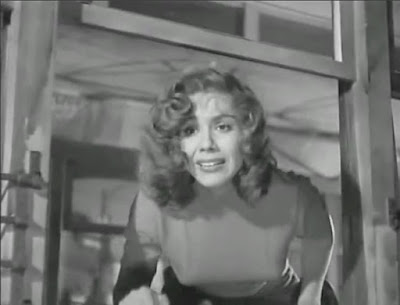 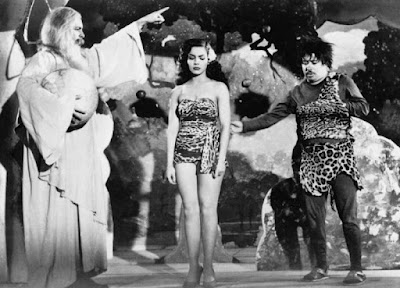 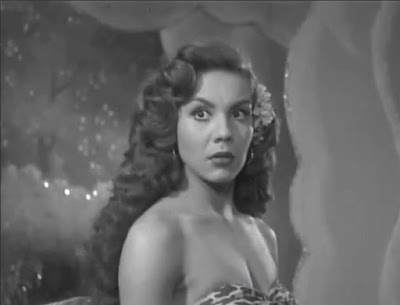 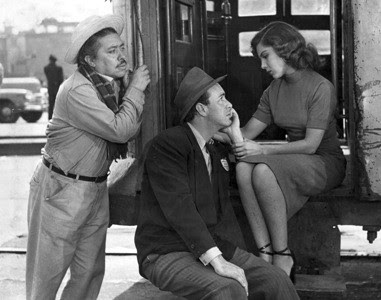 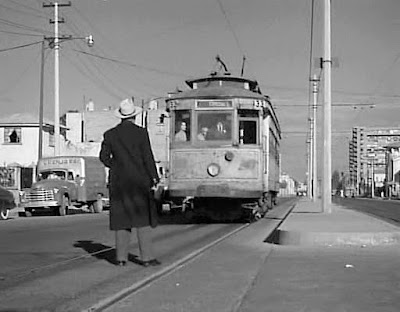 
Here in Mexico, I have become a professional in the film world.  Until I came here I made a film the way a writer makes a book, and on my friends’ money at that. I am very grateful and happy to have lived in Mexico, and I have been able to make my films here in a way I could not have in any other country in the world.  It is quite true that in the beginning, caught up by necessity, I was forced to make cheap films.  But I never made a film which went against my conscience or my convictions.  I have never made a superficial, uninteresting film.


—Luis Buñuel in an interview with Wilfried Berghahn from Filmkritik, 1963


One of the more accessible and charmingly entertaining films by Buñuel, an actual screwball comedy filled with an intriguing cross-section of humanity, often at odds with one another where the haves and have-nots mingle with class-conscious humor onboard a streetcar, which becomes a moving set where trams connected to power lines are constantly seen cris-crossing throughout the film like some crazy homage to Ozu.  Set between his early surrealist phase (1929—32) and his later European phase of movies (1966—77), Luis Buñuel produced the largest body of his work, twenty of his thirty-two films in Mexico (1946—1964), coinciding with what was heralded as the Golden Age of Mexican cinema, an era when Mexican cinema dominated the Latin American scene.  Exiled from Spain when the Spanish Civil War led to the fascist rule of Franco, Buñuel was considered a surrealist slumming in the Mexican-melodrama market, making low-budget studio films while earning a reputation for being extremely calm, prepared and efficient during shooting, but it was with his Mexican films that Buñuel began to fully develop his unique mix of surrealist humor and social melancholy, combining a documentary sense with surrealist qualities into a loose, discontinuous form of narrative, paying especially close attention to the details of average Mexican life.  Made just after Él (1953), set in various neighborhoods of Mexico City, the film is considered among his most “Mexican” movies, though Buñuel’s personality, wit, and subversive themes are on full display.  Reflecting life during the administration of Mexican President Miguel Alemán Valdés (1946—1952), more systematic governmental attention was paid to industrialization, national infrastructure, and economic development than previous administrations, but it also represented a period in which the gap between the wealthy and the poor became much more evident.  One of his many quick and inexpensive studio films of the 50’s, this is a comedy about two mechanics who are devastated a streetcar they have steadfastly worked to repair is suddenly scheduled for demolition, deciding to get drunk and borrow it for one last midnight ride, only to encounter plenty of difficulty trying to return it.


The story concerns Curly and Tarranjas (Carlos Navarro and Fernando Soto), two friends who lovingly restore broken down streetcars back to working order, taking a certain amount of pride in their work, so they are offended when the company decides to scrap a perfectly operational vehicle, where their pleas to save it fall on deaf ears.  Having spent nearly half their lives with “Streetcar 133,” they’re not inclined to let it go so easily, deciding to christen it with a last voyage, showing a more playful side of Buñuel, demonstrating a great capacity for irony, opening with a church nativity scene, or Pastorelas, which becomes Buñuel’s interpretation of Milton’s Paradise Lost depicting the fall of man, humorously performed by the local dramatic society with the lead characters playing significant roles.  Buñuel’s actual comment on religion was “Thank god I’m an atheist.”  As quoted from Orson Welles, “Buñuel is a deeply Christian man, and he hates God as only a Christian can.”  In what appears to be a celebration of the workers in an alcohol-fueled performance, it becomes an absurdly told passion play where Curly plays a heavily bearded God in a white robe as the creator of the garden of Eden, while Lilia Prado as Lupita, the sister of Tarranjas, plays the most sensuous rendition of Eve on planet earth, actually seducing Adam, who in real life is none other than her brother, both cast out of paradise.  In Buñuel’s twisted universe, this incestuous relationship forms the basis of the origins of man.  Prado is a revelation in the film, the epitome of a voluptuous women, a former beauty contest winner and dancer, she and Sivia Pinal were the only Mexican actresses who worked with Buñuel in three films.  Curly appears to have a thing for her throughout, where there is a back story that remains untold, as instead the bacchanal revelry continues on the streetcar, taking it around the city on a drunken spree for one wild last run, picking up an eclectic group of characters along the way, where out of some moral obligation they refuse to charge a fare.


There have been stories of runaway trains, like RUNAWAY TRAIN (1985) or UNSTOPPABLE (2010), also dream sequences where trains play a vital role, like SPIRITED AWAY (2001) or INCEPTION (2010), but Buñuel is among the best at blurring the lines between fantasy and reality, all told in a Mexican context, where on public vehicles you were just as likely to encounter people carrying crates of fruit or live turkeys, or as shown here, a surreal dreamlike sequence where they make a stop at a slaughterhouse, with butchers climbing onboard carrying slabs of meat, hanging giant chunks of raw meat throughout the streetcar, leaving little room left for the human occupants.  Because of their drunken state, it’s not clear whether this is what they really see or a bizarre hallucination.  At one point, someone dumps brains into Lupita’s lap as a gift for the free fares, where the improbable becomes commonplace in a Buñuel film, like pious old ladies carrying the image of a saint, collecting donations wherever they go, cynically using religion to shake down passengers, all shown with a comic relish.  When a snooty bourgeois American woman climbs onboard, she grows indignant at the thought of a free fare, claiming it “smells like Communism.”  In MEXICAN BUS RIDE (1952) and again here, Buñuel has a blast intentionally showing Lilia Prado’s legs when she climbs aboard the streetcar, where it is a male rite of passage to stare and watch her skirt fall open, unveiling part of her thigh as she raises one leg.  This sexual allure becomes part of the passive voyeuristic obsession that comes with riding public transportation.  Unable to sneak the tram back the next morning, they have various odd and ironic adventures all over Mexico City, continually avoiding their superiors while trying to sneak the streetcar back into its depot.  They are nearly undone by an aging transit system retiree, Papá Pinillos (Agustín Isunza), who feels it’s his duty to report the stolen streetcar to the company he’s worked for his entire life, but the company refuses to believe him, feeling it’s impossible they could make such a mistake, and instead berates him for continually butting into the company’s business long after he retired.  It’s a fascinating worldview, an exaggerated satire of bourgeois values, taking aim at church and state, becoming a Kafkaesque comedy where absurdity and chance occurrences coexist in an everyday normality, all told through the (supposed) raving delusions of an aging pensioner trying to expose what amounts to a ghost train let loose through the center of town, where he’s the only person in the entire city who can see it, apparently, as according to the certainty of his bosses, the streetcar never left the depot.
Posted by Robert Kennedy at 12:16 AM