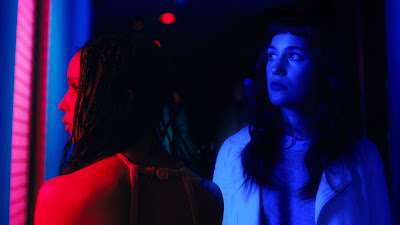 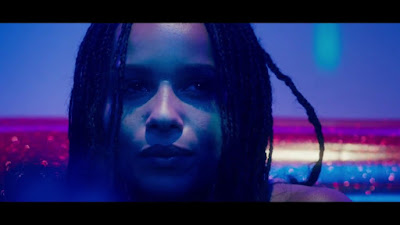 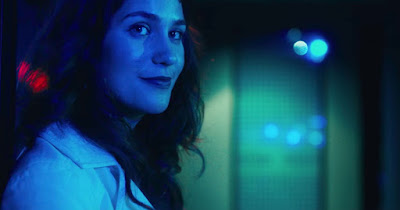 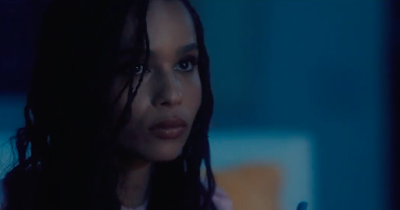 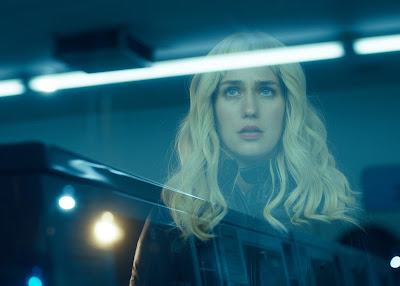 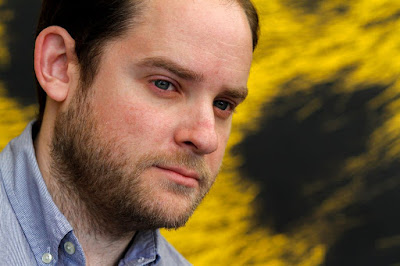 Finally, a film playing at the film festival that is actually fun to watch.  Portland indie director Aaron Katz, the maker of COLD WEATHER (2010), seems to be amusing himself at the expense of the dreaded or perhaps hated Los Angeles (as viewed by everyone on the West coast that lives north of there), home of the nouveau riche with an arrogant, self-satisfied smugness, creating a film noir drama featuring women for a change, where it’s an absolute delight from start to finish, opening with upside down palm trees, mocking the southern California image and lifestyle.  Written, directed, and edited by Katz, which is his style, this is a beautifully conceived, well-written and gorgeous looking film, perhaps the director’s best effort yet. What’s interesting is that Katz as well as his musical composer Keegan DeWitt are both Oregonians transported to Los Angeles, where this film represents their first inkling of how it feels to live there, offering an impressionistic, neo-noir take that is irresistibly intoxicating, with a jazzy score underlying its stylish elegance.  Somewhere on the outskirts of LA as the sun is setting we find two friends in a car, actress Zoë Kravitz, alluring as always, playing Heather Anderson, a high-strung Hollywood actress who wants out of her latest project, while sitting alongside her is Lola Kirke as Jill LeBeau, her personal assistant, who receives an angry phone call from Heather’s ex-boyfriend, “Tell her I know what’s up.  Tell here to fuck off and I’m going to fucking murder her.”  Both tend to ignore this craziness as old news, instead focusing on the important matter at hand, as Heather wants Jill to do her dirty work for her, conveying her thoughts to the director, Greg (Nelson Franklin), who is waiting to meet her in an Italian restaurant to discuss the film.  While their personal banter is amusing, simply by the way they speak, almost in code, with Heather feeling especially vulnerable, but unable to deal with confrontation, and Jill resembling Greta Gerwig in her matter of fact style of delivery, where she plays the straight man to everyone else’s convoluted hysteria.  Greg, naturally, blows his top, but not before ordering two of every app (short for appetizer) on the menu, something this particular restaurant specializes in, but walks out in a huff before he has a chance to try it.  As if by design, Heather steps into his abandoned place at the table, joined by a rabidly interested fan (Jessica Parker Kennedy) who can’t get enough of Heather, gushing over her entire career, wanting to take selfies with her, which Heather, seemingly amused, has no problem with.  On their way out, the paparazzi descend upon them, especially Stan (James Ransone), a particularly obnoxious guy whose unethical practices match his scum personality.

This little opening scene perfectly describes the world of celebrity, exposing the unique nature of friendships with assistants, where best friend and confidante only begins to describe their role, while also revealing a seedy side of Hollywood rarely portrayed in movies, showing a precarious relationship between stars and adoring, worshipping fans whose motives are entirely unclear.  As if to clear their heads, Jill and Heather are joined by Heather’s latest girlfriend, Tracy (Greta Lee), at some fashionable, late hour nightclub, with a color coded entrance reduced to slo-mo, where clearly visible is a “Gemini” zodiac tattoo on the back of Heather’s neck, all getting blitzed before the original two head back to Heather’s home, an immense, architecturally designed building that exudes a sleek, modern stylishness.  Strangely, the outdoor security motion detector light is triggered, but both are too tired and wasted, heading off to sleep.  Jill rises early, once again covering for Heather at planned reshoots, but before leaving, Heather confides that she feels unsafe and asks to borrow Jill’s handgun that she carries for protection, showing her how to use it before she goes, only to find Heather dead when she returns, shot five times with Jill’s gun, in a particularly gruesome scene.  The lead detective on the case, John Cho as Detective Ahn, is a savvy cop with a special charm, inviting her out for coffee where they can talk, then orders her a coffee even after she refuses and tells her to drink up, exhibiting more personality here than any other film, but he recognizes right away that Jill is the brains behind the operation, but also the lead suspect.  This unfortunate incident leads to a labrynthian journey to find the real killer and prove her innocence, as the cops are all over her home, leaving her no safe place of refuge, turning into an amateur sleuth on-the-run style of film, rounding up all the usual suspects while revisiting many of the familiar places of LA, including a ride through Mulholland Drive and the Hollywood hills, with that beautiful overlook of the city off in a distance glittering in lights.  Using his regular cinematographer, Andrew Reed, the city looks radiant on the surface, including an artfully designed color scheme, while highlighting a series of stunning architectural locations that accentuate a new, upscale Hollywood, interestingly filled with much younger clientele.  This actually has the feel of earlier Michael Mann films, as the artistic design fused with sophisticated jazz tones is striking, featuring the relaxed vibe of Southern California while accentuating the cool surface textures.

What’s perhaps most remarkable is just how normal Jill seems, her adroit self-assurance, unbothered by all the pressure building up around her, as clearly she is an over achiever, yet prefers the anonymity of allowing someone else to shine, knowing they will be shown in the best possible light due to all the behind-the-scenes work that she puts in, taking care of all the little details, none of which are actually part of her job description.  At one point Detective Ahn asks where she’s from.  “Portland,” she responds, to which he inquires, “Maine or Oregon?”  These little asides are beautifully written and perfectly executed onscreen, with just the right timing and inflections.  Both Kirke and Cho give superb performances, always in balance as both ally and adversary, adding a contemporary demeanor for an updated, more laid back tribute to Raymond Chandler’s sleazy Los Angeles, where crime, betrayal and deception lurk around every corner, but instead of tough talk we get the common sense of a girl clever enough to figure things out.  While the first order of business is purchasing a disguise, Jill finds the most pretentiously cheap outfit imaginable, one that challenges anyone’s view of fashion sense, something of a knock on glamor in show business, bleaching her hair blonde (though it looks like a wig), adding a trench coat and silly hat, along with cheap sunglasses, looking pretty much as she did before in this surprisingly upbeat whodunit.  Humorously playing on character and identity, where Jill seems to be Heather’s other half, which hides her own persona, begging the question are things ever what they seem?  In this film, only Jill seems totally grounded in reality, while the world around her is a shape-shifter, constantly exchanging looks, discovering new identities with each new role, revealing yet another side to the media, exposing only what you want to expose, where charm is cynically scripted, hiding the real truth behind the scenes.  Similarly, there are baffling twists and turns ahead that may leave an audience perplexed and asking questions, yet following the clues, Jill’s persistence pays off, but not before her journey becomes a surprisingly fresh riff on hard-boiled detective capers, slyly subverting the genre, with Jill becoming the alter ego of the writer/director, where they seem to be in a running dialogue with each other in a kind of symbiotic relationship, literally matching wits with all the other characters.  At one point, decked out in black leather gear from head to toe, she seems to be the answer to a Russ Meyer fantasy.  Still, the pulsating rhythm and tone, along with the remarkable look of the film is attributable to the director in this brilliantly paced film, feeling electric at times, and always enjoyable, showing there’s no special tricks required for good filmmaking.
Posted by Robert Kennedy at 12:00 AM