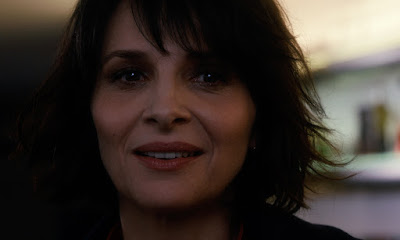 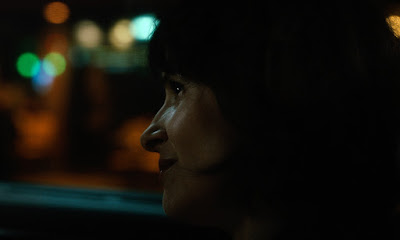 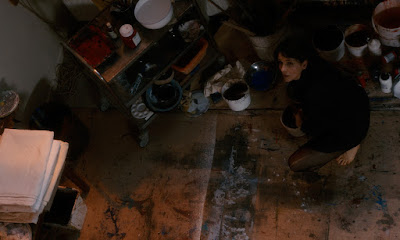 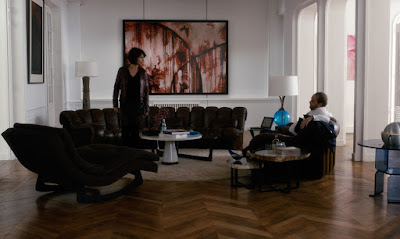 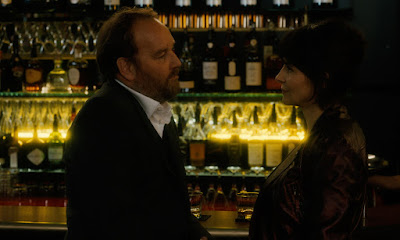 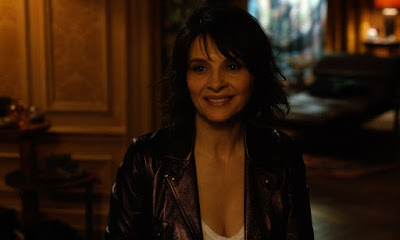 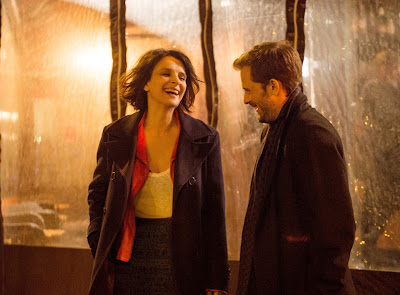 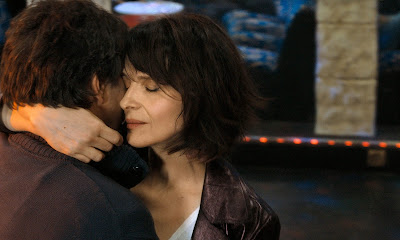 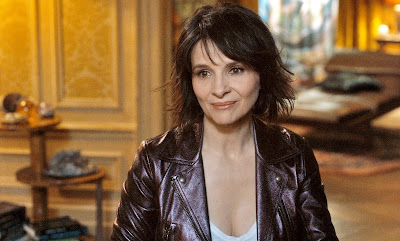 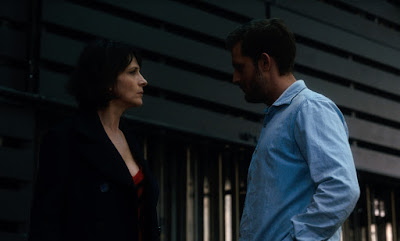 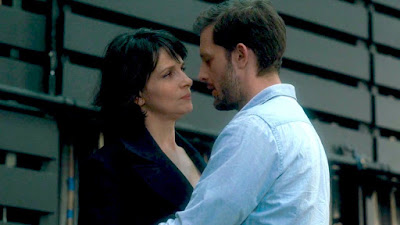 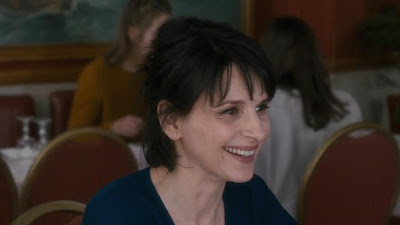 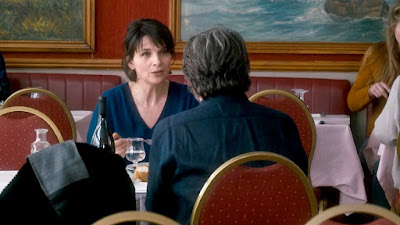 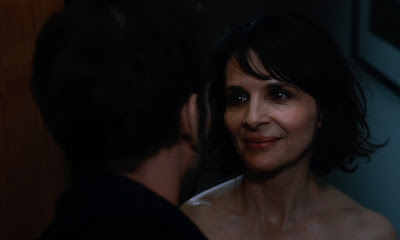 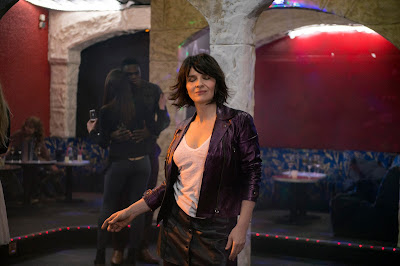 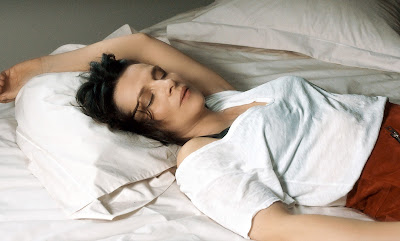 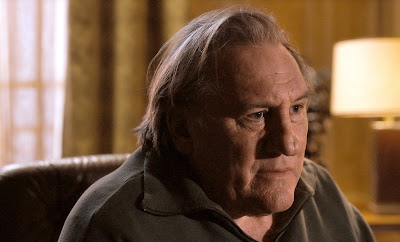 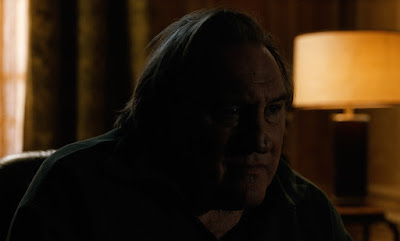 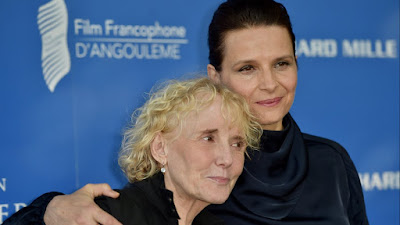 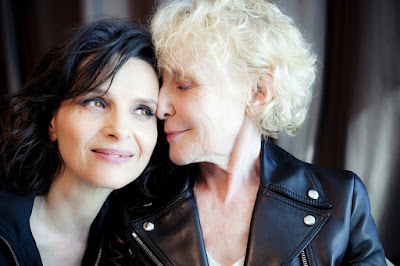 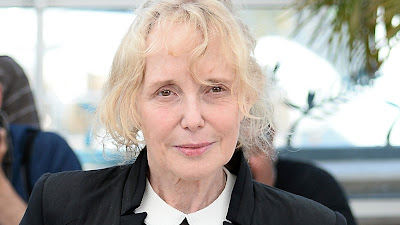 
A kind of wistful comic romp is not what we’re used to seeing from this director, far from the moody depths of her typical despairing works, probably closest to, but never rising to the level of VENDREDI SOIR (2002), yet nonetheless engaging in so many respects, though it catches us off-guard by being so emotionally open.  At the center is Juliette Binoche as Isabelle in a harrowingly wonderful, tour de force performance, energetic, sublime, an unstoppable force, playing a woman divorced, now in her 50’s, who works as a painter in one of her more memorable roles, where her character is a bit goofy, but exasperatingly honest and clear-headed, having what it seems is a midlife crisis, as her biggest fear is that romance in her life is suddenly dead and buried, that it’s all behind her, yet it resurrects its head with each impassioned relationship with someone new, moving from one man to the next in a delightful game of musical chairs.  With Denis working this time with a co-writer, novelist Christine Angot (and perhaps uncredited help from frequent collaborator Jean-Pol Fargeau), together they tackle a modern adaptation of Roland Barthe’s 1977 novel, A Lovers Discourse: Fragments, (Fragments d’un discours amoureux), which is more of a philosophical exploration of a lover’s inner monologue, inspired by Goethe, Plato, Nietzsche, Freud, Sade, Sartre, and others, becoming an examination of hopes, complaints, and reflections about love when alone, musing on its subconscious effects, trying to make love intelligible once again.  Perhaps the real key is they likely adapted nothing from the novel, instead creating something entirely new and free from literary constraints.  Now if that’s not a daunting task, yet Denis makes it seem effortless, turning this into a modern era comedy about one woman’s perpetual search for “true love” in all the wrong places, where we move from exhibit A to exhibit B, and so forth, where each could be the one, but isn’t, leaving Isabelle feeling like she’s running out of time.  Binoche couldn’t be more refreshing, an indomitable spirit that refuses to be deterred, committing herself fully, rushing headlong into each new relationship with renewed hopes, yet inevitably ends up dissatisfied and disappointed.  Far from being deflating, however, Denis finds humor in each and every obstacle, some of it downright hilarious, though a darker underside provides a counterpoint throughout.


While Kate Winslet refuses to do nude scenes any more, this doesn’t apply to Binoche, who is naked from head to toe in the film’s opener, where we find her in the throes of mad, passionate sex with Xavier Beauvois, yet it turns on a dime into a comedy of errors, with each, apparently, not getting what they want, turning into a kind of sexual misadventure until an inappropriate remark leaves both in a state of disconnect, and while Beauvois seems perfectly content, Binoche is devastated.  When we see them again at a sophisticated bar, Beauvois couldn’t be more of a contemptible snob whose arrogance has no bounds, a banker dulled and confined by his career choice, eager to find others outside his field, like free-spirited artists, for instance, where momentarily they revisit an incident that has overt sexual parallels with the pathetic final scenes of LAST TANGO IN PARIS (1972).  But after indiscreetly revealing an unsubstantiated rumor about her prospective work partner, suggesting she had an affair with one of Isabelle’s former lovers (a tall tale, having a good laugh afterwards with her partner, Josiane Balasko, over that one), the banker’s manner is unfailingly rude, thoroughly disgusting Binoche, who feels it’s time to move on.  Beautifully shot by Agnès Godard, with extreme close-ups of faces, with atmospheric music provided by Stuart A. Staples from the Tendersticks.  While the film is a series of dubious choices, in the interludes, we see Binoche flopping onto her bed in a state of disarray, yet her wardrobe changes are noticeable, cleavage exposed, short skirts and black stockings, always dressing with a flair for being chic, and young, where she turns the difficulty of taking off her zippered, near knee-length boots into one of the more enjoyable moments of the film, screaming in agony, while at the same time mad at the world for being so discouragingly unfair.  Perhaps the best sequence of the film has Isabelle literally stumbling into an actor after a performance, meeting a young and handsome Nicolas Duvauchelle, where they have a drink (where he amusingly consumes endless glasses of beer, continually handed one after another), and she eventually entices him back to her place, where the noncommittal back and forth verbiage is simply masterful, neither one wanting to reveal their hand, playing it coy, offering hints, but remaining vague, completely shifting positions, usually ending up doing the opposite of what they imply, where eventually, once they stop blabbering, they can’t take their hands off each other.  Awakening in sheer amazement at the stroke of good fortune, Isabelle is dumbfounded to discover the actor felt it was all a mistake, that whatever possibilities were there at the outset are now irretrievably gone, where this increasingly absurd dialogue is simply remarkable.


Opening at the Director’s Fortnight at Cannes, Denis prefers a lower profile, away from the flashiness of competition, where she reinvents herself with every new film, tackling the heartbeat of middle age, particularly strong-willed women who are still searching for a romance that works.  Other men her age, or from a similar class, tend to be noncommittal, already married with children or turned off by failed marriages, remaining skeptical about relationships altogether, just wanting the sex, yet for men, the idea of being with a beautiful woman is “always” a possibility, even if it’s only in their dreams.  One guy exemplifies this futile chase, always meeting her “by accident” in front of the fish market, inviting her to his newly rehabbed home in the country, to stay as long as she wishes, making it sound like his presence would be negligible.  While remaining polite, she routinely ignores him.  Perhaps the most exaggerated presence goes to Paul Blain, humorously resembling a world-weary Mick Jagger on the prowl, a man lurking in the shadows at a club that notices her when they play the classic Etta James ballad “At Last” Etta James - At Last - Lyrics - YouTube (3:04).  Sneaking up behind her, they have a dreamy but beautifully staged dance together without uttering a word, becoming a parody of what many women must expect.  Perhaps the true test of this film is combining the forces of Binoche and Gérard Depardieu, who publicly trashed her reputation as an actress, calling her “nothing” onscreen in a 2010 interview, Gerard Depardieu calls Juliette Binoche 'nothing' in provocative ..., while Binoche, for her part, says they had barely spoken more than a sentence or two together in her whole life, failing to understand his beef, though the bravado she expressed in 2014 Top Ten List #3 Clouds of Sils Maria seems to have been motivated, in part, by that public dispute, re-establishing her reputation as one of France’s finest actresses.  While admittedly horrid in Bruno Dumont’s exaggerated comic misfire Slack Bay (Ma Loute) (2016), this is yet another resurrection that confirms she’s one of the best actresses working anywhere in the world today, bringing a unique vitality to her role, still vulnerable and easily wounded, as she has been throughout her career, yet able to fend off the best of them.  But what about working with Depardieu?  How would that play out?  Using the tricks of the trade, they were never filmed in the same shot, which means they were likely never on set together at the same time, yet they appear onscreen opposite one another, where Denis magically brings them both together in a spirit of unison.  Depardieu offers a lengthy monologue at the end as a somewhat devious fortune-teller describing her romantic journey, implanting hints that place him in contention with the rest of the pack, perhaps assuming the lead dog position after she’s had her fill of young pups, but never coming right out and saying it, allowing the audience to read between the lines.  As if proving unconventionality, the closing credits appear over this dialogue as it continues, creating a screen diversion, perhaps a metaphor for all the interruptions that effect our lives, seemingly banal, yet an accumulative force that can be sheer aggravation, preventing us from being whatever the hell it is we think we should be.
Posted by Robert Kennedy at 12:40 AM