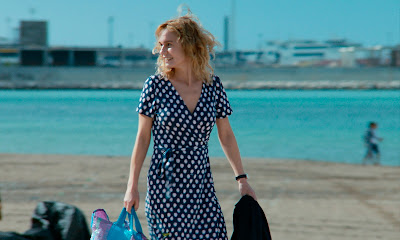 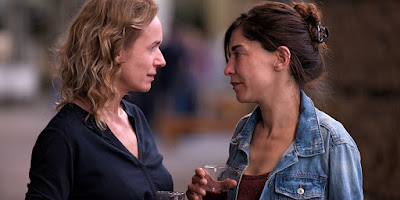 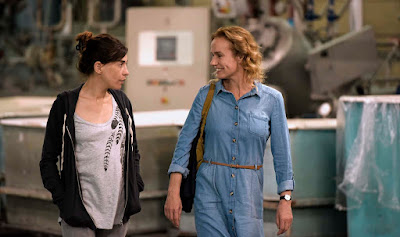 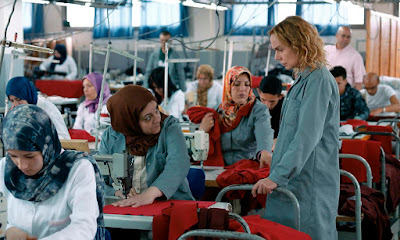 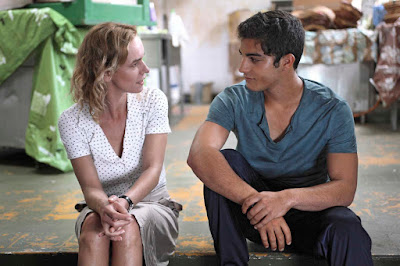 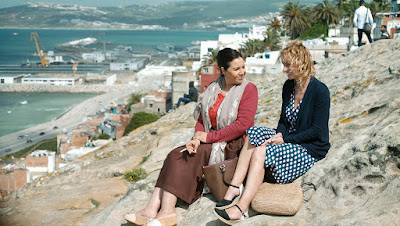 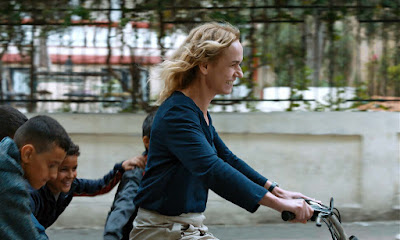 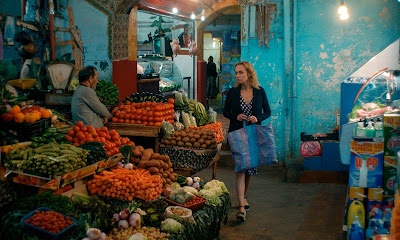 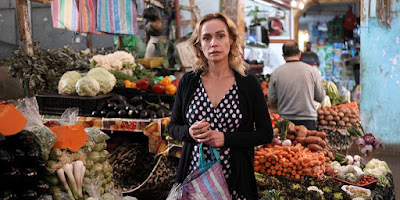 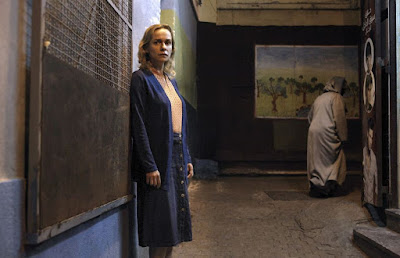 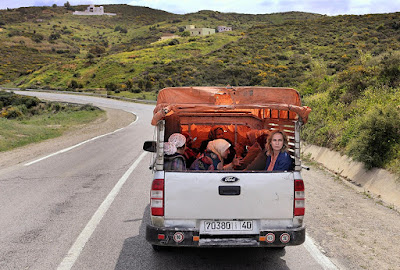 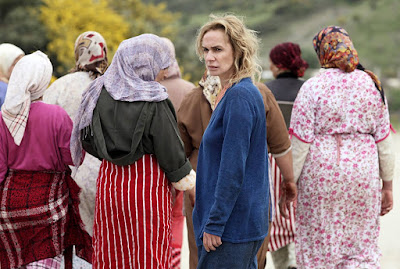 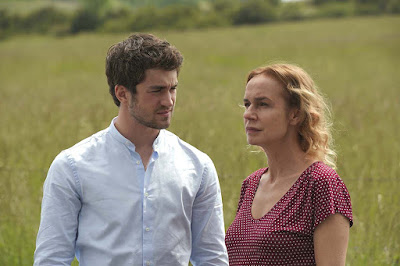 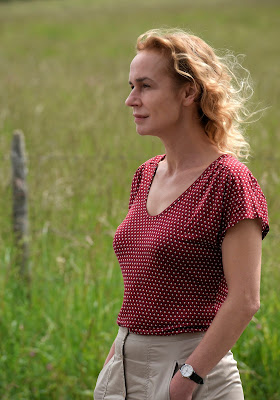 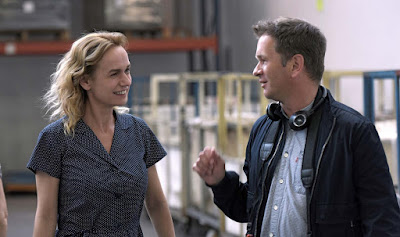 Gaël Morel got his start as a young teenage actor discovering his own sexual identity in André Téchiné’s brilliant film, Wild Reeds (Les Roseaux Sauvages) (1994), essentially a story about discovering one’s true nature, set amidst a backdrop of what was an extremely divisive colonialist French war in Algeria, happening simultaneously to America sending young men off to Vietnam, where there is an undercurrent of racial animosity expressed towards Algerians on French soil.  This film comes full circle, flipping the script, sending a contemporary French woman to Tangiers in Morocco where she can suffer the same indignities of being treated as an outsider, labeled “Frenchie,” where she is constantly singed out, ridiculed, and mistreated for her association with the former French colonial rule.  The aftereffects of colonialism are striking, as despite gaining their independence in 1956 following forty years of French and Spanish colonial rule, Morocco has never evolved into democratic rule, prohibiting parties that do not accept Islam or the regime of a monarchy, temporarily suspending newspapers or TV media outlets for negative criticism of the King, inflicting harsh fines, while it is common for youths under twenty to languish in prison for up to three years even before the start of any trial, where prison conditions are overcrowded and in a state of disrepair.  On a positive note, Morocco is one of the more progressive Middle-Eastern states in the area of women’s rights, with recent Moudawana (Ups and Downs of the Moroccan Family Code • Talk Morocco) reforms raising the minimum age of marriage from 15 to 18, granting women the right to initiate divorce, increasing custodial rights after divorce, making husbands and wives fully equal, though more than half of divorced men fail to pay alimony.  Women’s access to justice, however, is limited, particularly in rural and suburban areas due to poverty and illiteracy, where domestic violence complaints are often ignored.  The overwhelming majority of the population is Arabic, while 97% are Sunni Muslim.  Excessive use of force targeted against protesters or demonstrations is common, while less than 6% of the labor force is unionized, making it extremely difficult to organize, basically all but impossible, so workers refrain from doing so, fearing job loss.  The government has the power to suppress strikes and prosecute workers that initiate them.  For those used to European protections, living and working here can be an eye-opening experience, which becomes the underlying premise of this film, opening a new world for the uninitiated, introducing viewers to a new vantage point, placing yourself in someone else’s shoes.

It was Maurice Pialat’s À Nos Amours (To Our Loves) (1983) that introduced us to the radiant beauty and incomparable delights of Sandrine Bonnaire, appearing so fiercely independent in Agnès Varda’s Vagabond (Sans toit ni loi) (1985), teaming up with Isabelle Huppert in Claude Chabrol’s La Cérémonie (1995), working with Jacques Rivette, playing the lead character in JOAN OF ARC Pt’s I and II (1994), while working with him again in SECRET DEFENSE (1998).  After having directed Catherine Deneuve in AFTER HIM (Après Lui) 2007, co-written by Christophe Honoré, then Béatrice Dalle in OUR PARADISE (Notre Paradis) (2011), Morel centers this film on Bonnaire’s completely unpretentious performance which sets the tone for the rest of the film.  Morel was born in Villefranche-sur-Saône, a lovely French village of 30,000 residents set in the rolling hills of the Rhône region, which is the initial setting of this film, as Édith Clerval (Bonnaire) is a middle-aged machine operator in a textile factory (the same one where the director’s father worked), living alone in her old family home, but times are changing, with factories moving out of the country seeking cheaper labor costs, offering a severance package to the French workers before closing the plant, all of whom take the offer except one, Édith, an extremely self-reliant woman who can’t imagine herself not working, so she takes the offer to keep working for the company in Tangiers, despite having to pay all relocation costs herself.  People think she’s daft, as the wages are nothing like those in France, but Édith ignored the collective union actions to prevent the plant closing, which failed, and the pleas from her plant organizer, basically telling her to get lost.  In her working class upbringing, a person has always been defined by their work, which is what makes them a productive member of society.  Before she leaves, she takes the train to Paris to alert her son Jérémy (Ilian Bergala), then has to wait around all day for him to come home from work, as her visit was unannounced, only to be ignored at a group dinner party that evening.  Jérémy is living with his gay partner, but in a strange twist, he is the one that didn’t invite her to the wedding, having trouble apparently with his mother not showing homophobic anger after his coming out, as most all his friend’s parents are not so accepting, instead taking a selfish and stand-offish attitude with her, actually finding her a nearby hotel just to be rid of her, never having the chance to explain the reason for her visit.  With that, and reportedly “nothing to lose,” she’s off to Morocco, approximately a half-hour ferry from the Gibraltar crossing to the African shore.

Immediately life is different, there is culture shock, as she’s descended upon by young men fighting over who gets to carry her bags for a fee, literally snatching them out of her hands until she’s rescued by an older taxi driver who shoos the young men away like pestering flies, arriving at a nearly empty rooming house with meager accommodations away from the tourist section.  She encounters Mina (Mouna Fettou), a divorcée (and proud of it, glad to be rid of a no good husband) living with her nearly grown son Ali (Kamal El Amri), showing an initial detachment, forcing her to find her way in a strange environment, needing people on the street to help translate just to find her way to work, discovering by chance a group taxi that goes right to the factory door.  She’s surprised to discover they’ve offered her a different job, as the only machines they use are old sewing machines, where the somewhat hostile supervisor Najat (Farida Ouchani) offers no assistance whatsoever, but is openly suspicious why someone from the more privileged French mainland would choose to come work there, holding a grudge against her throughout.  Avoided by one and all, she is shunned at the workplace until befriended by Karima (Nisrine Erradi), who is barely scraping by, stealing pieces of fabric out at night and making clothes on her own, which supplements her income.  Just as quickly she is robbed of all her savings, leaving her in the precarious position of being unable to pay rent, nearly keeling over from exhaustion and overwork, where Ali sympathizes, offering her food from the family kitchen.  In time, however, things balance out, where the warmhearted gestures by Mina and Ali become noticeable, with Ali seeking out familial advice, like a second mother.  To Ali’s surprise, she actually feels less lonely in Tangiers, as the city is more vibrant, populated by streets thriving with activity, where every day seems to offer something new.  It’s only in Tangiers that Édith comes to appreciate the help of a union, as workers have no rights in what amounts to a sweatshop, using dangerous equipment that is never serviced, leaving several of them badly injured.  When she reports this to the boss, as one would routinely do in France, it only makes it worse on the workers, as the floor is run through fear of losing their jobs, eliciting a unanimity of total silence.  Seemingly out of spite, Najat continues her crusade against the foreign worker, delving into deceit, planting stolen fabric in her purse, setting her up for dismissal on bogus charges, which all but demoralizes Édith, having little recourse, desperately attempting migratory day labor, anything at all, which is back-breaking work, especially on an empty stomach, turning tragically bleak.  Morel is no great shakes as a filmmaker, demonstrating nothing new, stylewise, but his insistence upon giving this film a social realist, working class perspective is uncommon (likely a tribute to his father), as is his interest in stripping away the stereotypes and prejudice surrounding foreigners or people of color, taking meaningful anti-discrimination efforts, intentionally writing them into the heart of the storyline, becoming significant to Édith (and viewers), producing memorable characters.  But the film was written with Bonnaire in mind, who is in nearly every frame of the film, rising to a level that is hard to achieve, immersed in something profoundly difficult, offering a devastating portrait of a proudly independent woman out on her own.  Curiously, closing credit thanks were given to actress Catherine Deneuve and writer/director Christophe Honoré and his family.
Posted by Robert Kennedy at 12:03 AM