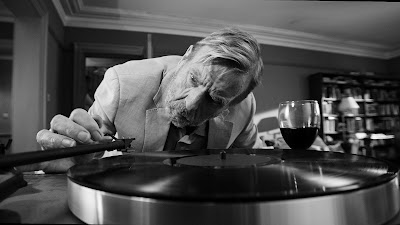 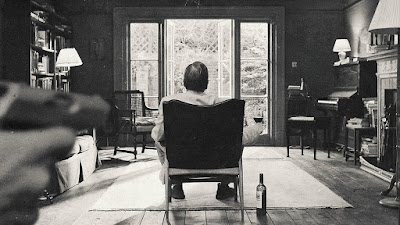 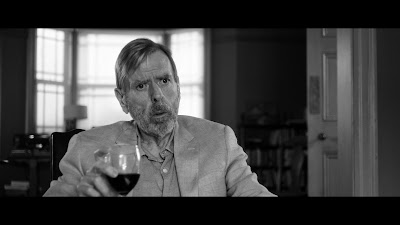 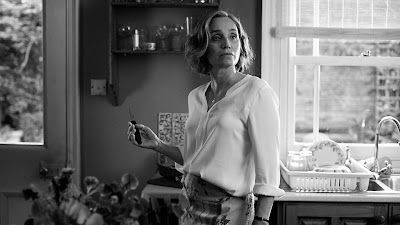 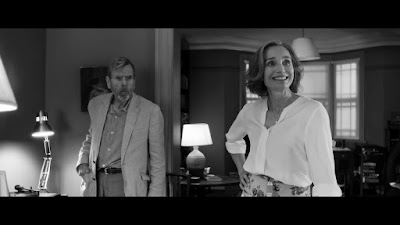 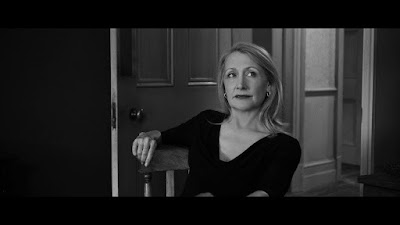 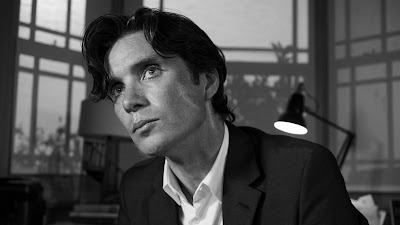 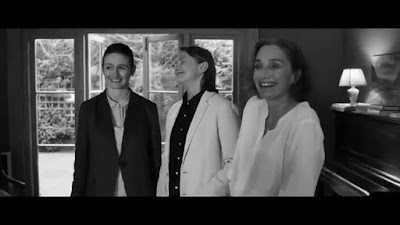 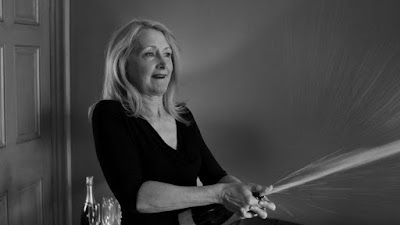 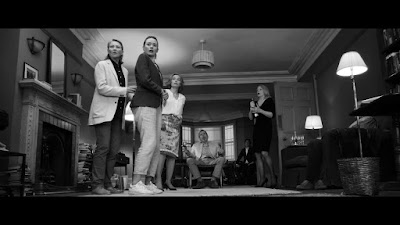 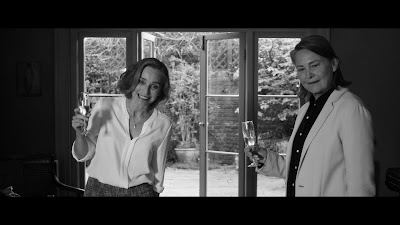 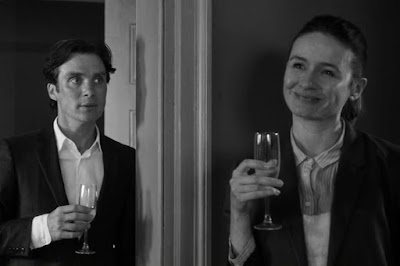 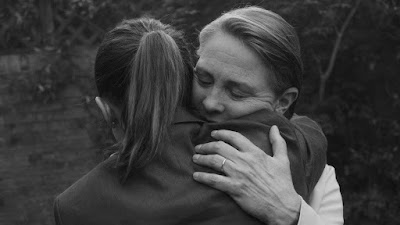 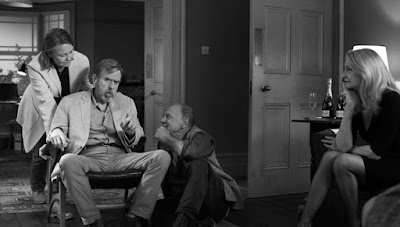 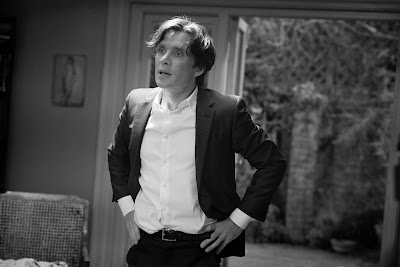 Director Sally Potter’s commitment to bold experimentation has always been intriguing, to say the least, while not always successful, in her daring to find something uniquely different to offer, as her films aren’t for everyone, and tend to divide filmgoers.  That said, the trailer for this film seems wacky and hilarious, so expectations for a savagely offbeat satire seemed promising.  While her previous film, 2013 Top Ten List # 10 Ginger & Rosa, was set in the early 60’s, an era of budding idealism juxtaposed against end-of-the-world Cold War scenarios, this is firmly set in the anxiety-ridden fluctuating times of today, when Britain as we know it is undergoing some kind of midlife identity crisis, on the verge of disappearing altogether, becoming a scathing satire of the post-Brexit world (though surprisingly shot prior to the Brexit vote).  Reminiscent of Mike Leigh’s ABIGAIL’S PARTY (1977) and Ozon’s take on an unpublished Fassbinder play when he was only 19, WATER DROPS ON BURNING ROCKS (1999), both are scathing indictments of the world we live in today, where indifference and cynicism rule supreme, and while produced in different eras, they still maintain a sarcastic bite of laceratingly dark comedy mixed with a disturbing anguish.  While somewhat uneven and not nearly as successful as those earlier iconic works, they do provide a frame of reference for viewers, one of complete irreverence, becoming something of a parody of a parody, targeting the powerlessness of liberalism, suggesting the end is near, where this could just as easily be called LAST TANGO IN BRITAIN.  Every dysfunctional character seems to personify what Britain stands for today, or what it has become, like a mutant step-child, an embarrassment that is a part of us but we don’t want others to see.  Presumably a celebratory occasion, a group of old friends arrive in the London home of the newest Minister of Health, Janet (Kristin Scott Thomas), ever the idealist, appointed to a prestigious position in the opposition party and certainly a rare accomplishment from this group of educated elite.  Perhaps to set the mood, while Janet is thrilling herself on the phone in the kitchen with sweet talk from a secret lover, her husband Bill (Timothy Small) places himself directly in the center of the living room with a glass of wine, drinking heavily before any of the guests arrive, playing records while stuck in a catatonic stupor, looking disoriented while listening to the unmistakable sounds of Muddy Waters, Muddy Waters - Im a Man (Mannish Boy).mp4 - YouTube (3:55), as one by one the guests arrive.  Before the night is done, however, one of the guests will be lying on the floor like a corpse, a curious allegory for Britain’s gloomy fate, with fingers pointed and various people trying to resuscitate the seemingly lifeless body back to life, with the ultimate outcome shrouded in uncertainty and doubt.

Promising a good time for all, this party rocks with disillusionment and open suspicion, resembling the downward spiral of Polanski’s Carnage (2011), becoming a free-for-all of resentment and accusations, like a modern day Who's Afraid of Virginia Woolf? (1966), cleverly written by Potter herself, with a first class cast that thrives in the theatrics of performance theater and soon turns upon each other, hurling plenty of hilarious one-liners, where the key is an effortless choreography of a world spinning out of control, perhaps responding thematically to an opening salvo, declaring “Democracy is over.”  First to arrive is her American best friend April, Patricia Clarkson, easily the best thing in the film, never more acerbic, a self-professed cynic and realist getting all the best lines (“I’m proud of you, even though I think democracy is finished!”), and new-age partner Gottfried, Bruno Ganz, an aromatherapist/healer (“Prick an aromatherapist and you’ll find a fascist,” she says), announcing they are splitting up, finding her husband indescribably boring.  Next to arrive is a constantly bickering lesbian couple, Martha (Cherry Jones), an academic professor specializing in domestic labor gender differentiation in American utopianism (perhaps spending too much time in women’s studies, suggests April), and her younger partner Jinny (Emily Mortimer), a TV Masterchef runner-up, who immediately announces she’s pregnant with three boys.  Last but not least is Tom (Cillian Murphy), a nervous financier who announces his wife Marianne, who helped run Janet’s campaign, will be arriving later, offering apologies, immediately locking himself in the bathroom to do lines of coke, a habit he repeats later, sweating profusely throughout, while also carrying a concealed gun, growing ever more nervous about it, eventually throwing it away in a garbage bin.  This weapon works its way throughout the storyline just by its mere possibility, as it takes the incendiary barbs one step further, adding a violent trace of inevitability.  When April pops the cork in the champagne bottle, it immediately shatters a window (“That almost never happens”), an ominous sign of things to come, where sinister comments about lost ideals and keeping up with post-post-feminism just keep coming, “Sisterhood is a very aging concept,” each seemingly disapproving of the other.  Among the biggest surprises is the superlative musical soundtrack heard throughout, ranging from the traditional jazz standards of Sidney Bechet, What Is This Thing Called Love? - Sidney Bechet - YouTube (3:53), to the modernism of Albert Ayler (Albert Ayler - Summertime - YouTube (8:47), including a stunningly downbeat John Coltrane, John Coltrane and Johnny Hartman - My One And Only Love - YouTube (4:58), to the rousing Cuban music of Ibrahim Ferrer, Ay, Candela - Ibrahim Ferrer - YouTube (3:23), all offering differing comments on the changing mood in the room, like a poetic Greek chorus, much as Potter did in her previous film.

Shot in stark Black and White by Russian cinematographer Aleksei Rodionov, best known for shooting Elem Klimov’s remarkable Come and See (Idi i smotri) (1985), the movie is short but nasty, where each character is caught up in their own problems, immersed to the point of paralysis, or so it seems, everyone feeling betrayed, with little energy to spare for anyone else.  Gone are the younger days of youthful idealism and democracy in action, becoming instead a chamber drama of personal failures and indiscretions, showcasing their hidden secrets and lies, fueled by “chronic insincerity,” which seems to define the mindlessness of campaign rhetoric, led by April’s accusatory tones, laying into everyone with zingers, openly declaring war on anyone complicit with the status quo, who by the end is left to reassess the situation, surprisingly discovering that she and Gottfried are actually the best adjusted couple in the room.  This comes after a visibly distraught Bill rises from his stupor to announce he has a hopelessly terminal medical illness, where he had to go outside the National Health Service to get an appointment, a defiance of everything his wife had steadfastly worked and campaigned for, before dropping an even bigger bombshell, which may explain Tom’s fidgety behavior, announcing he’s leaving Janet, wanting to spend his final time with Tom’s wife, Marianne, confessing a yearlong affair (or perhaps two), suggesting the attention paid to him only emphasizes Janet’s woeful indifference, as he now understands what he’s been missing.  Janet’s initial recourse is to slap him hard in the face, recoiling in disbelief at what she’s done before doing it again, drawing blood.  As Janet bites down on her arm in disgust, wailing “I believe in truth and reconciliation,” an Iago-like April promotes the idea of exacting revenge, actually encouraging her to take matters into her own hands, as he’s got it coming.  Gottfried immediately jumps into the role of life coach and mediator, like some cult guru, supporting Bill while catty forces conspire against him, offering the advice, “You need to protect yourself from so much negative female energy,” becoming an openly defiant battle of the sexes.  In a momentary lull, Janet discovers the gun in the trash bin, raising the stakes, with ominous Hitchcockian implications.  Tom, however, is boiling over with coke residue, more enraged than ever at Bill, and cold cocks the man who’s stealing his wife, leaving him inert on the ground, like a corpse.  Not knowing if he’s dead or alive, he has immediate regrets and concerns, trying to cajole him back to the living, with little success.  Stuck in a neverland between the living and the dead, Bill seems to personify Britain’s current crisis, brought on by a toxic spell of unbridled masculinity.  Trying to find music for the occasion, to help resuscitate Bill’s broken spirits, Tom plays the first record he finds, Purcell- Dido and Aeneas~ 'When I am laid in earth' (Dido's Lament ... (3:50), a funereal song of great dramatic magnitude that may as well be an anthem for the dead.  The irony of these absurdly poor choices is not lost on the audience, as this film hilariously probes the underbelly of insanity that lies at the root of today’s modern conflict.  With Buñuelian wit and precision, and without offering any solutions, this film metaphorically sticks a fork into what’s left of the rotting corpse formerly known as Great Britain.

Note
Of special interest, the actors and actresses in this film all got paid equally and are using this fact to promote equal pay for women in the film industry.
Posted by Robert Kennedy at 12:01 AM