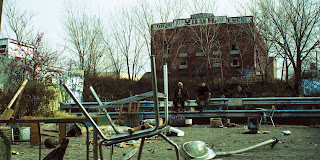 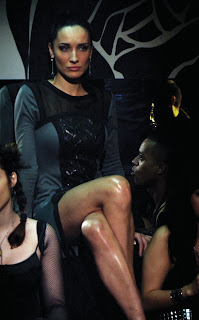 ZENITH                                  D
USA  (93 mi)  2010  d:  Vladan Nikolic
This, unfortunately, is a candidate for one of the worst films of the year, as it feels like a jumbled mess, a film that wants to be something complicated, but isn’t.  Apparently the director is a fan of puzzle films, where there’s a dark mystery underlying the order of the universe as we know it.  And in the hands of good directors, those films work because of the inventive worlds created that come alive onscreen, but placed here in the wrong writer/director’s hands, this film generates little interest or enthusiasm and represents a hopeless indulgence on the part of the director.  While it attempts to be a futuristic, sci-fi drama, made for a little more than $100,000 dollars, there is no visual conception whatsoever of the future, as there’s nothing remotely different except they’ve eliminated a good deal of their vocabulary, so our existential hero, known as Dumb Jack (Peter Scanavino), memorizes lost and forgotten words that express dread, depression, or malaise, as otherwise the world’s a happy place with no use for those words anymore.  But of course, we see scant evidence of this Happyville, instead the film is shot in vacant lots and graffiti-filled back alleys that look pretty much like today.  Even worse, the film is narrated throughout by Jack, who couldn’t be more dull and disinterested, continuously speaking in the same monotonous tone.

Apparently due to chronic epilepsy, Jack retains a natural connection to misery and pain, allowing him to see through the phony new order, developing a kind of underground status.  Trained as a doctor, Jack has become a pharmaceutical expert making his living selling drugs while visiting prostitutes on the side, yet continually whines about how bleak the world has become in the year 2044.  A second storyline develops when Jack is visited by an old friend of his father’s (Jason Robards III as Ed), a man who chased wacko conspiracy theories and lost faith in God but continued to work as a minister, becoming disillusioned and more and more disheveled until he allegedly went insane and disappeared without a trace, but left some old videotapes behind for Jack.  Jack’s world in the future is shown simultaneously with his father’s in the past, seen through the videotapes, where both are grasping to make some sense in the world.
Ed’s world changes during a confession when a man reveals he knows about a small elite group of men who have developed plans to take over the world using a “fountain of youth” idea they call Zenith, which is outlined in a book, which in the future is no longer in existence, while Jack runs into a surprisingly literate prostitute (Ana Asensio) who uses many of the forgotten words, which he finds intriguing.  But even more intriguing is waking up in her upscale glass house on the lake where we discover her father is a hundred years old but through genetic alterations looks like he’s in his thirties.  But Jack doesn't do the math and hardly notices or pays attention until it’s too late.  The whole world is a dump and one guy lives in a palatial estate, with an intelligent and beautiful daughter, yet he never stops to take interest?  Instead, the film bogs down into unnecessary and superfluous details as he becomes fascinated by his own father’s revelations in the past, where both are digging endlessly through clues, interview after interview, uncovering one eccentric after another, plodding along while he continuously gets the shit kicked out of him, where he’s also busy tracking down yet more copies of missing tapes, eventually trying to accumulate the entire collection.

It appears his father was onto the idea that would change the world before it happened.  As clues unravel, the world of the father and son converge, where they’re each faced with surprisingly similar choices.  But both the father and son unwisely face the future alone despite having allowed themselves to become too disconnected and too far removed from the world around them to have any real impact.  Their disinterest translates into a mind numbing dullness onscreen, as they’re seen as sulking impotent outsiders rather than men of initiative or strike force capability.  Once we get to the finale, for a split second a world of possibilities does seem to open up, where a low budget film like PRIMER (2004) showed how editing alone could scramble the timeline and intensify the suspense.  But here it all feels so generic and inevitable, as the acting and the production values are so poor that there never is any underlying tension or suspense, instead an overriding mood of hopeless detachment prevails throughout this entire picture.
Posted by Robert Kennedy at 1:56 AM