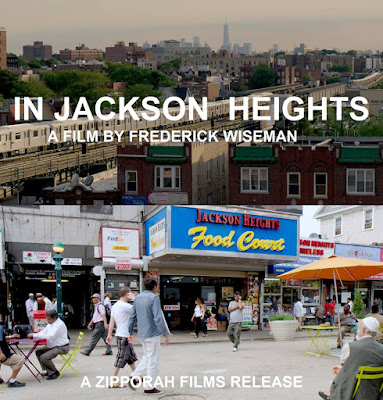 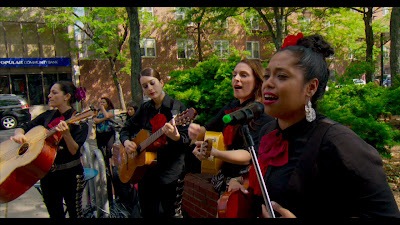 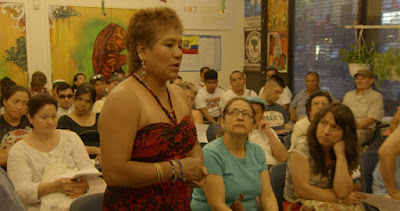 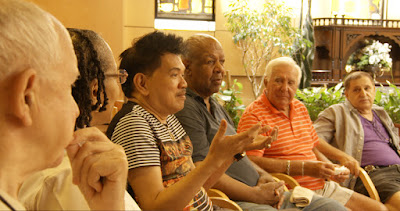 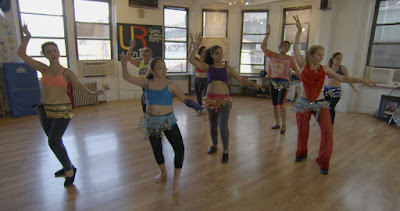 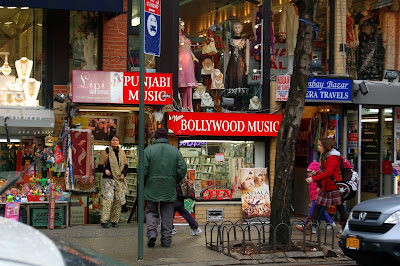 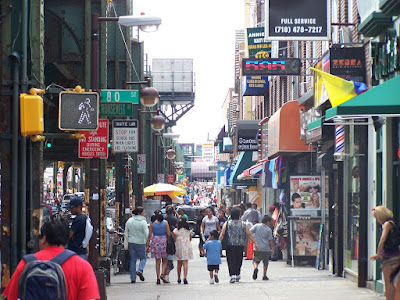 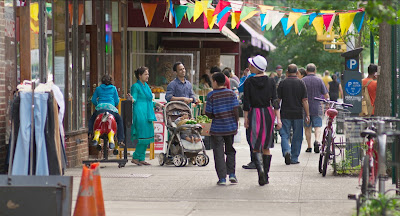 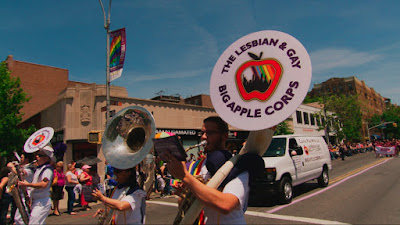 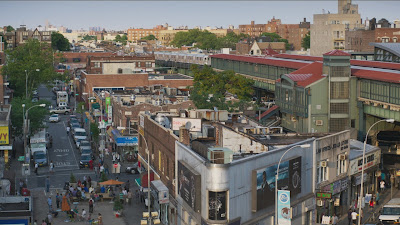 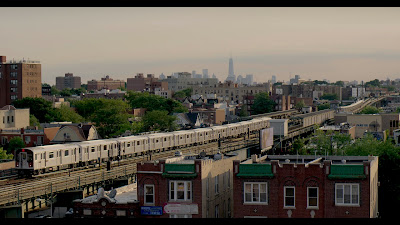 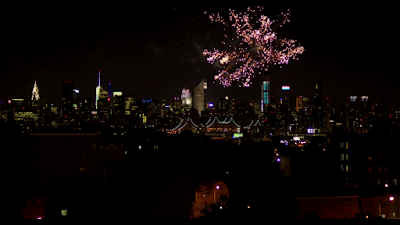 
Rigorously shot, impeccably edited and at times startling in their beauty, these films usher us into often otherwise anonymous spaces and lives, and help make the invisible visible.  Fiercely political, Mr. Wiseman nonetheless rejects the social activist label.  “Documentaries,” he acidly wrote in 1994, “are thought to have the same relation to social change as penicillin to syphilis.”  Neither social activism nor journalism, they are instead “fictional in form and have no measure of social utility.”


Perhaps more than anything, Wiseman’s new film is a documentation of American democracy in action, as the director takes us inside the meeting rooms of so many different grass roots organizations that it will be hard for most viewers to come away from this film without being thoroughly educated on a host of issues, all of which reveal the extraordinary diversity that exists within this New York City neighborhood in north-central Queens, a historic district since 1993 (so no high rises) that is barely half-a-square-mile, where 167 different languages are spoken.  Less than half-an-hour from Midtown, where prices are a world away from the trendy establishments in Manhattan, it is also considered the most ethnically and culturally diverse community in the world, where the sidewalks are literally bustling with activity, where roughly half the 67,000 residents are Latino, including immigrants from the Caribbean, Mexico, and every country in South America, especially Bolivia, Colombia and Peru on the east side, where street carts sell pineapple drinks with shaved ice under Spanish signs.  To the west are Indians, Pakistanis and Bangladeshis, who comprise about 20% of the non-Latino population, displaying bright colors, clothes, jewelry, and richly embroidered saris in the shop windows.  A section of 37th Road has been turned into an open street pedestrian mall, where tables and chairs are set up in the middle of the street allowing bikes, skateboarders, rollerbladers, and various other street traffic to get by, often passing by a line of street vendors displaying their wares out on the sidewalk.  The neighborhood is noted for its expression of extreme tolerance, where people are very accepting of everybody else, which is certainly on display in an early scene conducted by city council member Daniel Dromm as he lists off dozens of nationalities while hosting a political fundraiser at a local Jewish community center.  Forced to initiate a Kickstarter fundraiser campaign of his own just to make this film, it is a monumental effort, shooting for nine weeks, editing for ten months, where 120 hours of footage was reduced to just over 3-hours in length, which is fairly typical of Wiseman documentaries, allowing viewers total immersion in the field of exploration, with no explanatory commentary or interviews, where viewers must appraise the findings and come to their own conclusions.


After chronicling the challenges of higher education in At Berkeley (2013), or exploring what’s behind the scenes of a world class art museum in National Gallery (2014), Wiseman’s films have a way of being provocatively indispensable, certainly one of the greatest living documentary filmmakers, where he stands alone as having compiled a body of work that is literally a time capsule record of the western world.  Noticeably absent in this film is any shot of New York outside the explored neighborhood, where viewers are literally confined to this perplexing mix of an almost idealized community comprised of Muslims, Christians, and Jews, where every wave of immigrant experience coming to America is represented.  As we see a street corner named after Julio Rivera, Councilmember Dromm recalls the origins (Tears for Julio Rivera 25 Years After his Murder - Gay City ...), where he was killed in 1990 by 3 marauding skinheads “hunting homos” in Jackson Heights, noting the police had little interest in solving the case, where he was seen as a “throwaway,” offering no reward for his murderer, assigning it to an officer who was on vacation.  But a groundswell of community support, spearheaded by Dromm himself, a gay man who was a grade school teacher in 1990 suddenly turned social activist, sparked neighborhood interest in obtaining justice for Rivera, standing up against homophobia, and eventually founding the Queens LGBT Pride parade in 1993, an event where Dromm is considered the honorary Mayor.  No sitting New York City Mayor had ever walked in the parade until Wiseman’s filming where current Mayor Bill de Blasio is seen waving to an enthusiastic crowd.  The scene shifts to a neighborhood club discussing what would be an appropriate meeting place, and while there are several options, most agreed that the Jewish community center was the most actively supportive, as the synagogue is largely out of the neighborhood, but the community center embraces people of all faiths, including Muslim prayer groups (where we are witness to a Ramadan prayer), and were on the front lines supporting LGBT rights when other religious organizations dragged their feet.  There was an interesting cut to a support group of female transsexuals discussing places where they could feel comfortable, noting that police often harass them in places where they work.  Of particular interest was a black male claiming he gets “less” harassment from police and whites in general when dressed as a trans woman, where she walks down the street completely invisible, than when he’s dressed as a man, where he is viewed with skepticism as a potential purse snatcher.  In a similar circumstance where an Hispanic transsexual was discriminated against at a local restaurant, we see the LGBT community rise up in anger protesting in Spanish outside the doors of the restaurant.


Certainly one thing that’s different in this film is listening to a series of lengthy speeches advocating various political causes, many of which are in Spanish, subtitled in English (half the film is in Spanish), where your eyes are forced to continuously follow the laborious text, missing whatever else is shown onscreen, like the intensity of emotion (or lack thereof) in the room.  Public meetings have a tendency to be long winded and often taxing, even when exhibiting the best of intentions, where they can become monotonous after awhile, especially when so many are seen in succession.  That is not the case when listening to a collection of immigrant stories, in particular an Hispanic woman describe her harrowing adventure crossing the border from Mexico into America, where they were literally left for dead at some undisclosed location, forced to recall landmarks from a street sign or a bridge they passed along the way to help identify their location, losing their cellphone coverage during their only call, where they waited for nearly two weeks before being rescued.  The Hispanic community groups are filled with younger and more energetic workers, describing their working conditions as minimum wage cooks in fast food restaurants or taking cleaning jobs when nothing else was offered.  They receive plenty of support and welcome feedback from others who have experienced similar circumstances.  This is in sharp contrast to hearing the aching loneliness described by a 98-year old white woman with all her faculties intact, describing how she has outlived everyone else in her family, has no friends left, where the $2000/week in-home nursing care providers never actually “talk” to her, as they never reveal anything personal about their own lives, where someone has the audacity to recommend that she “pay” for someone to come in and talk to her, suggesting money can buy anything.  Another scene shows a small gathering of elderly Jewish Holocaust survivors listening to a heavily accented speaker read about the Shoah, a remarkable event made even more shocking by the number of empty chairs surrounding them.  There are frequent shots of Roosevelt Avenue, one of the main thoroughfares, displaying tiny shops and storefronts underneath the elevated subway tracks, where there is a staggering amount of restaurant choices in the community, but the one that stands out is the live poultry market, where there are crates of chickens and roosters waiting for slaughter, which is graphically shown in its abhorrent exactitude.


While there are shots of Colombian soccer enthusiasts during the run-up to the World Cup, where the euphoric patrons of a bar spill out onto the street to celebrate, resulting in multiple arrests, Arabic lessons are taught to equally enthusiastic children, prayers are seen at a colorful Hindu temple, while another customer sits in the chair getting a splash of color in one of the local tattoo shops, but easily the most comical sequence is a tutor session for aspiring cab drivers, where people of all foreign nations seem represented, but it’s cleverly taught specifically for “foreigners” with amusing anecdotes from the home countries.  The most dominant recurring theme in the film comes from a group of about 50 Spanish small business owners whose leases are not being renewed in a shopping mall where some have been in business for over twenty years.  While they have been told that legally landlords have every right to raise rents and renew to businesses of their choice who will pay the higher rates, it appears they are being driven out of the neighborhood by the room needed for a Big Box store like Gap or Home Depot, who may take up the space of 30 or 40 small businesses while offering opening week discounts of 30% or more to drive the remaining smaller markets out of business.  They blame this effect on a Business Improvement District (BID), where the higher prices of major Manhattan businesses are filtering into certain designated neighborhoods that have traditionally been filled by smaller businesses.  This can be fatal for many ethnic restaurants and small businesses operated by immigrant families, triggering a domino effect, as these employees are inevitably supporting families both in America and back home as well, where the loss of income will be devastating.  This may also alter the complexion of the neighborhood, driving out many of the ethnic groups that currently comprise this microcosm of cultural diversity.  Another constant theme we hear among Spanish minimum wage workers is how they are routinely pushed to work 50 or 60 hours a week but are only paid for 40, threatened they will be let go if they don’t comply, where they need the income, but employers are robbing them of wages.  This is also part of the immigrant experience, or the “American way,” forced to capitulate to capitalist exploitation or they’ll find someone else eagerly waiting in line to replace you.  Perhaps the final word on the subject comes near the end of the film.  “Here we have traveled the entire world.  No matter if you are Chinese, American, Dominican, Colombian, Argentinian… we see all the countries here [...] when a person wants to steal money from their workers, he doesn’t care.  He doesn’t care if they are from his country or family.  If his heart is set on making an extra dollar on the worker’s back, he will.”
Posted by Robert Kennedy at 12:03 AM