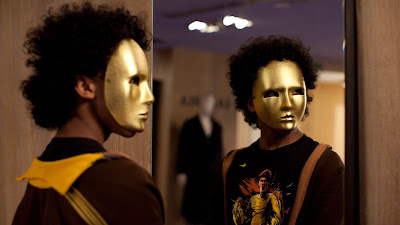 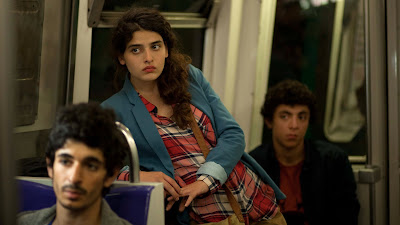 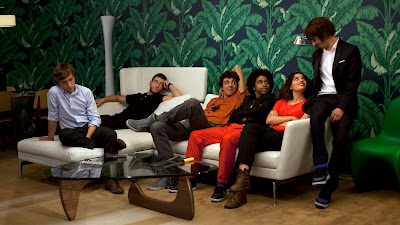 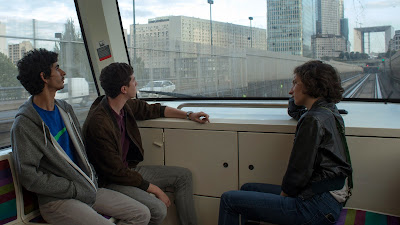 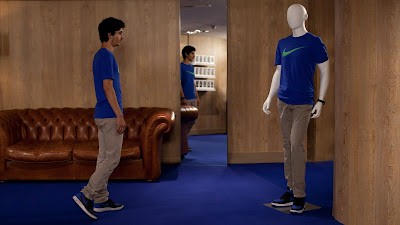 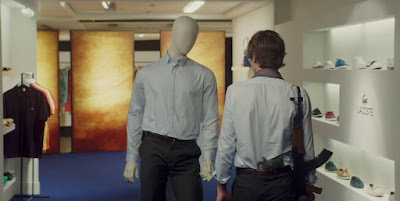 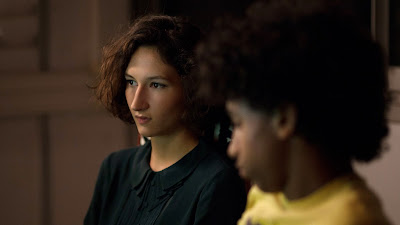 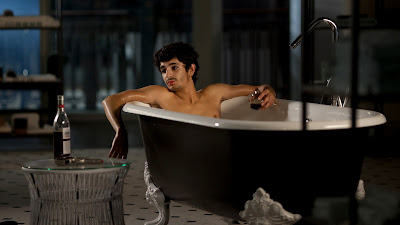 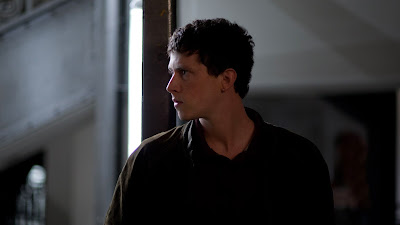 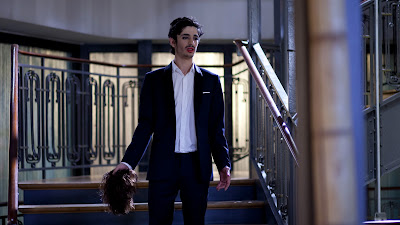 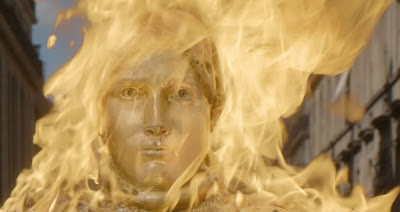 Another variation of Fassbinder’s THE THIRD GENERATION (1979), a political film set during the era of the Baader-Meinhof Gang (later called the Red Army Faction), revolutionary cells in the 70’s that carried out terrorist activities across the country, wreaking havoc with the status quo.  Fassbinder’s film is more of a satiric spoof of the bourgeois elite who comprise an offshoot underground movement of leftist radicals who come across more like a gang that couldn’t shoot straight, a rag tag group that reads all the literature, holds clandestine meetings, and believes fervently in what they’re doing, but haven’t any coherent ideology to speak of, remaining utterly clueless about how to accomplish social change, instead it’s more of a lifestyle choice, where they believe what they’re doing is fashionably chic.  The biting sarcasm becomes even more exaggerated in this film, which is basically divided into two halves, with the first part nearly wordless, featuring various characters following an exact regimen, following their watches, with time repeatedly imprinted onscreen, as if everything is scripted and coordinated as they take metro trains, pick up or deliver packages, including keys to carefully placed cars, enter buildings, pass through security, and walk through endless hallways, most of it in real time, where it feels like a satiric take of a meticulously synchronized thriller, like RIFIFI (1955), but pales in comparison, as this is more spread out, covering more territory, where the audience has no idea what’s going on as no background information is provided, yet it all seems to be taking place in secret, behind closed doors or in cloistered chambers before finally discarding burner phones after exiting.  Something we find odd is that it’s hard to care about what these individuals are doing as none of the characters are revealed to the viewers, remaining blank slates, where an hour into the film we still haven’t a clue who they are or what they’re doing, where the aloof style of the film intentionally distances the audience, nonetheless, what it amounts to is a choreography in motion through the streets of Paris, like something Rivette accomplished in a variety of his films such as Out 1 and Jacques Rivette R.I.P. (1971), Céline and Julie Go Boating (Céline et Julie vont en bateau)  (1974), and Le Pont du Nord (1981), where he made it a point to crisscross through distinctly recognizable Parisian streets, creating what amounts to loving time capsules of a beautiful city.  Bonello on the other hand is content to travel through non-descript hallways and inner rooms that could be just about anywhere, where the city and featured characters remain discreetly anonymous.
Certainly one aspect driving the suspense is a pulsating, electronic score written by the director himself, paying homage to none other than John Carpenter, whose haunting, atmospheric musical themes provide chilling counterpoint to his visceral thrillers throughout his indelible career.  As daylight turns into early evening, Bonello uses a device of four screens, like security experts watching a panel of different viewpoints, with explosions of violence erupting on each screen, followed by close-up views of each moment, where this is the first sign of what this film is really about.  When jolted into a better understanding of the master plan, the irony is that it seems small and insignificant, as the target was not human life, but they just wanted to blow up stuff, like the Weather Underground of the late 60’s and early 70’s.  But while the 60’s radicals targeted government buildings, along with several banks, they were also careful to alert these institutions ahead of time in order to evacuate humans to safety, while also sending a political message with each attack.  This group showed no such foresight, nor does it appear they are particularly concerned about others, as throughout the film they show a decided self-interest, identifying with the Selfie generation.  This scattershot approach to radicalism resembles Antonioni’s Zabriskie Point (1970), a picture of a fractured America expressed through a portrait of young radicals, police violence, capitalist cronies, endless desert landscapes and discontented youth, using unknown stars who had never acted before, where the prerequisite was not acting talent, but to flaunt their youth and be completely unashamed.  Jump ahead half a century and this film seems to be exploring similar themes, using a modern era context where smartphones have replaced the counterculture, where people are nearly always electronically connected to something of interest, resembling the giant advertising billboards in Antonioni’s film, as much of this feels entirely random.  In a mysterious turn, all the participants meet afterwards in an upscale department store, hiding to avoid detection until it is safely closed and locked up for the night.  While we see a few security guards start their rounds, in a gruesome turn of events, none are around to complete them, subject to a specific brutality that makes little sense and seems like it happened more out of convenience than anything else.  What’s radically different about this eclectic group of outsiders is that they have no common cause or ideology, where the director leaves out any hint at why this happened, suggesting they may not know themselves, which makes it all the more chilling.

When an all clear is given, our motley group comes out into the open and is finally identified as a group, a collection of privileged white university students along with a couple of Arab kids, where it’s never clear how they all came together, or even what they were trying to accomplish.  Instead, a security guy from the building, a new character we’ve never seen, has complete familiarity with the building, turning on the lights as well as the escalator, where people are free to wander around at will, trying on clothes, playing with various electronic gadgets, even riding around on a little mini-car, as well as invading the food courts and liquor cabinets, turning it into a party atmosphere, breaking off into smaller groups, friendships or love affairs, where they even blast contemporary music out of the sound system, feeling very good about themselves, completely disconnected from their earlier business.  As they wander around the building, the interaction with name brands and recognizable merchandise adds a degree of interest, as they’re hardly anti-capitalists, as these kids are completely at home in a capitalistic paradise, happily indulging themselves.  While there are televisions galore to watch the city recovering from the attacks, most show little interest, where the lack of curiosity certainly stands out, as these are not the brightest kids, some obviously having it all too easy, where a brother and sister compare alibis given to their mother for a night away from home, revealing the kind of personal attachments they still have.  Borrowing the security guard phone, who must remain accessible to his employer, one even calls his mother to send his love.   Other than that, they are all cellphone free so as not to leave any traces for the police.  Without it, apparently, this kids are completely rudderless, as not one of them is seen reading a book or writing something of significance, instead they appear bored with themselves and each other, as if that is their driving force.  As they wander the grounds, one of them even goes outside to smoke a cigarette, exploring the vicinity, asking about what happened, clearly unafraid of being seen by security cameras or the thought of being captured, even inviting a homeless couple inside, telling them there is plenty of food, adding a Buñuelian touch of the macabre when they have a feast and gorge themselves, where it all looks so ridiculously out of place, perhaps the only carefree zone in the entire city that is not affected by what is being described as terror attacks.  Occasionally one or two of them will have thoughts about what might happen to them, even thinking the worst, but they’re only really thinking of themselves.  Without warning, or revealing how they found out, a SWAT team moves into the ground floor and works its way up each floor, radically altering their smug view of themselves.  Immediately, two films come to mind, the fatalism of van Sant’s ELEPHANT (2003), where viewers remain clueless to the killer’s motives throughout, yet the camera wanders the halls first revealing the banality of just another ordinary day before the armed killers alter the mood entirely by seeking to execute anyone they see in those same halls, but also Fritz Lang’s M (1931), where the police systematically go floor by floor in a similar multi-floor office building that is closed for the night, hunting a trapped criminal suspect who is hidden somewhere inside.  But Lang builds an extensive psychological profile of both the deranged criminal and the police while all but inventing the police procedural film, while this in comparison feels overwhelmingly empty, void of any real purpose, with characters we never really get to know, where you couldn’t even call these kids terrorists, but in this day and age the police have little choice but to mercilessly treat them as such.  This film feels like terrorism light, as it’s not the real thing, becoming more of a satire on how easily kids can confuse grandiose ambitions with reality.
Posted by Robert Kennedy at 12:08 AM