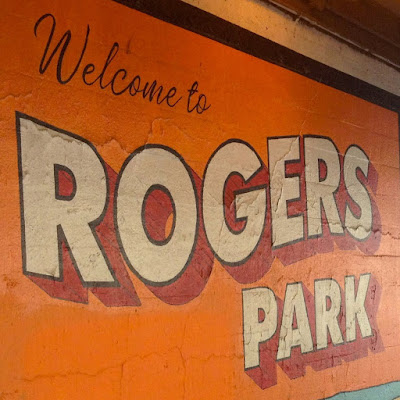 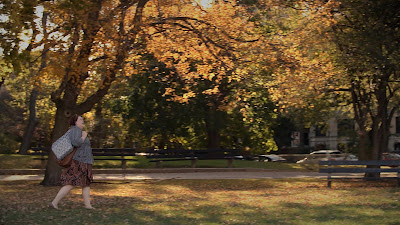 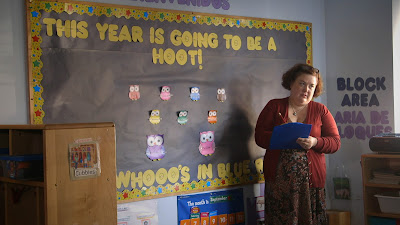 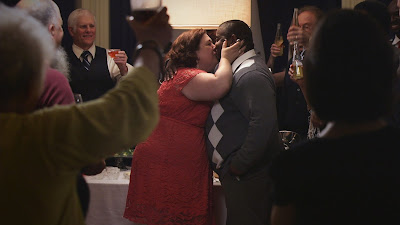 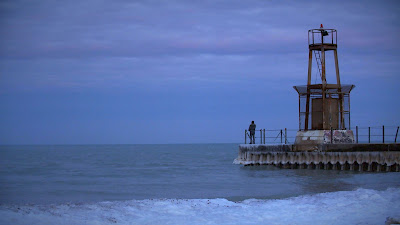 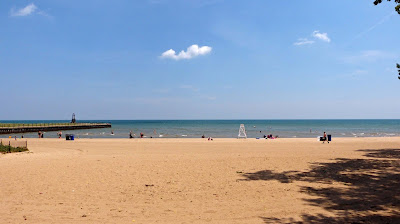 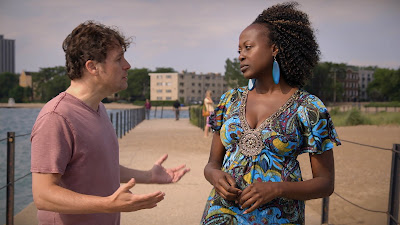 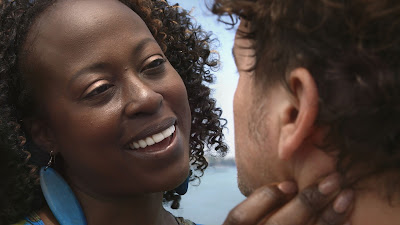 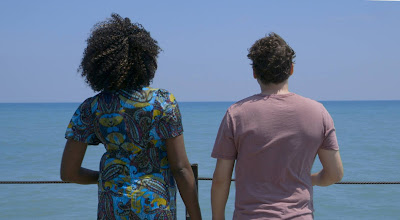 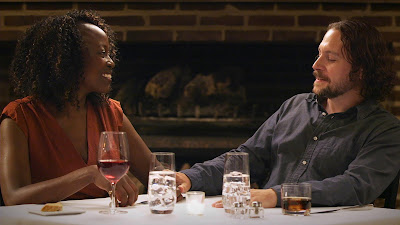 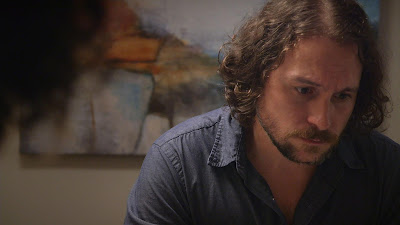 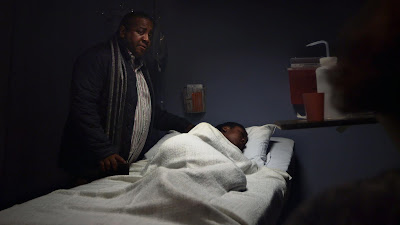 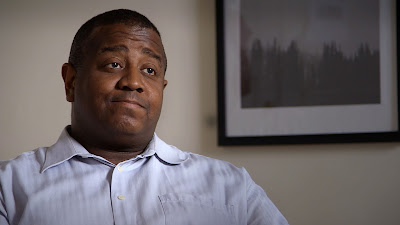 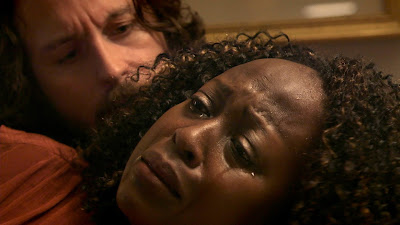 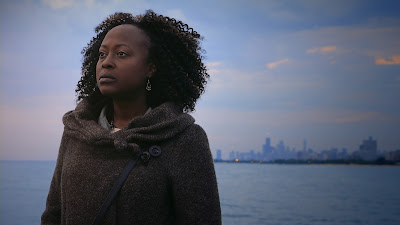 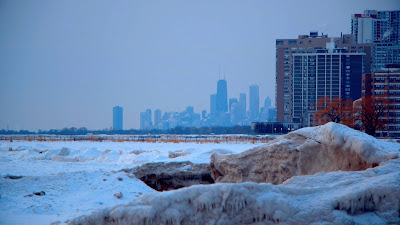 From the director of an unusual, mind-altering, post 9/11 indie film, ROOM (2005), which is noted for having a blaze of hallucinatory imagery and such an extraordinary sound design by Justin Hennard and Chris Keyland.  This is an altogether different experience, an intimate chamber drama written by Carlos Treviño, the live-in partner of the director (who teaches film production at Northwestern University), shot in and reflecting the character of the densely populated, far north neighborhood of Chicago where they reside, known for having the highest level of racial diversity in the city, but also a diverse array of students and academics, making it one of the most tolerant and progressively liberal neighborhoods in the city, set alongside the lakefront with several entranceways to notable beaches.  The film largely explores a year in the lives of four middle-aged residents who are all facing midlife pressures, depicting two interracial relationships, though race is not a predominate theme throughout the film and is almost ignored, suggesting this may not have even been known when conceiving the ideas behind the film, making this a stellar example of life in this community.  Favoring extreme close-ups, along the lines of Cassavetes’ Faces (1968), this is a carefully observed, yet understated ensemble drama featuring plenty of dialogue, where this could easily be a theatrical stage production, as in a short period of time we get to know these characters probably better than we know our own neighbors, as the film is more of a series of vignettes where the scars, inner secrets, and vulnerabilities of various lives are exposed.  Much of it feels claustrophobic, filmed in populated rooms where there is no escape, often feeling as if the weight of the world is on their shoulders.  Neither couple has children together, but are instead still battling the professional ranks of full career acceptance.  While most coming-of-age stories deal with the transition from adolescence to adulthood, this film suggests there is yet another transition to middle age.

The film opens in a Montessori pre-school setting where Grace (Sara Sevigny) rather cleverly mediates a dispute between two young children, instantly resolving a budding crisis with skill and aplomb, creating a rosy picture that may actually draw a few aahs from the audience, like how cute and adorable, which leads to the title sequence.  Well that’s the last chance to feel comfortable, as the rest of the film quickly escalates into tensions and lingering troubles that only magnify over time, threatening the very idea of stability.  Enter Chris (Jonny Mars, not to be confused with the name of a local radio host on WXRT), an extremely intense and troubled young man, who experienced success as a published author early on but has been unable to follow up, instead he’s a failed writer stuck in a state of emotional paralysis, probably fueled by his love of liquor.  Oddly enough, these two are brother and sister, though we don’t realize it until Grace has one of those neighborhood birthday parties where just about everyone shows up, so there’s no room to sit, as everyone is standing, where it’s all about food and drink and having a good time, including tribute speeches, where all credit apparently goes to her husband Zeke (Antoine McKay), an extremely generous and likeable black man who is an overworked real-estate agent who apparently just made a phenomenal sale also worthy of celebrating.  Into this little bubble of euphoria walks an already inebriated Chris, who decides to release the family demons, raising hell and fury in an enraged outburst, much of it targeted directly at his sister, wondering where was she when the shit hit the fan, whose personal diatribe is the picture of bad taste, a contemptable moment in an already dysfunctional family history, forcing Grace to literally throw him out, a rude interruption that opens the floodgates of ensuing troubles.  Following him out the door is his attractive black wife Deena (Christine Horn), a community activist who finds his behavior inexcusable, but stands by him, tenuously, so long as he works to get better.  With that initial baptism of fire, we are introduced to the four lead characters, and what stands out is the utter authenticity of the frazzled nerves and naked emotion, as there isn’t a trace of artifice in the script.

The rest of the film is a roller coaster ride of combustible emotions, where the biggest issue seems to be trust, perhaps the most fragile aspect of any relationship, yet that is where the film clings, refusing to let go, exploring the everchanging dynamics over time, where perhaps the heart of the underlying troubles is a noticeable lack of appreciation, reflecting that feeling of unease back at one another.  Upsetting the apple cart is the entrance of another gentleman caller who sets his sights on Deena, promising stability, exactly what her husband is missing, where she plays along, flattered by the special attention, even having an affair on the side that seems to do wonders to revive her inner spirit.  While its Grace and Zeke that seem destined for happiness, upon closer inspection Grace continually harps on Zeke’s troubled financial practices, as he moves money around like a professional gambler, always seeking a better financial opportunity, but usually ends up in a desperate search to cover his losses.  He also has a young preteen daughter Ruby (Lyric Ross) from another marriage, but strangely, neither one seems to have invested parental skills, as both are married to their own professions, leaving them little time for Ruby, who is often tragically forced to care for herself.  While the biggest problem seems to be the enormous chip on the shoulder of Chris, largely viewed as a grumpy, pain in the ass to everyone he meets throughout the film, hugely troubled by a childhood with an abusive father who passed away recently, with Chris the sole care provider during his final days, the source of his rage against his sister, who offered no assistance, yet through professional help from a patient therapist (none other than screenwriter Carlos Treviño), his outlook improves, though he remains a work in progress.  In a shared private moment at another social gathering, perhaps fueled by alcohol, Deena lets slip the idea that monogamy isn’t all its cut out to be, that an occasional change of partner can bolster a marriage, or so says one of her friends, an incendiary remark that certainly catches the eye of Grace, who offers one of those “uh-huh” moments before tearing into her for her personal transgressions.  After all, that’s her brother that she’s cheating on.  This explosion of fragile nerves on edge perfectly describes this stage in life when the decisions you make absolutely affect others, where it’s hard to own up to the mistakes you make, as this is precisely how feelings get hurt, tempers flare, and profound misunderstandings linger, some of which can be repaired, requiring extraordinary commitment and effort, and some will not, where you just have to learn to accept that a partner isn’t going to be perfect, but what counts is what’s in their heart.  Good stuff, completely outside the norm, a small gem of a film that explores the heart and soul of relationships, shot entirely within the confines of the entitled neighborhood, where the freedom of space given to the local actors makes this is an exceptional, performance-driven film.
Posted by Robert Kennedy at 12:03 AM