Racer and the Jailbird (Le Fidèle) 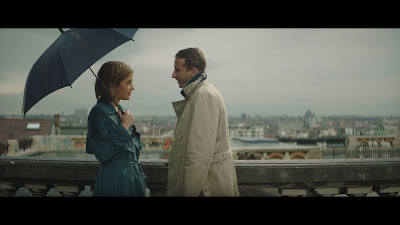 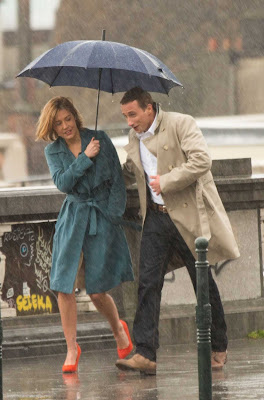 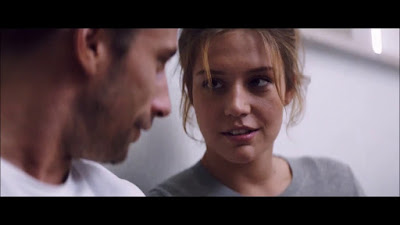 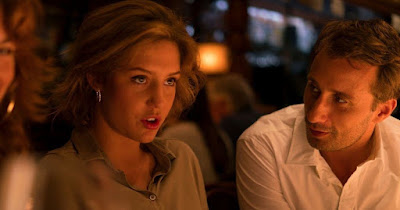 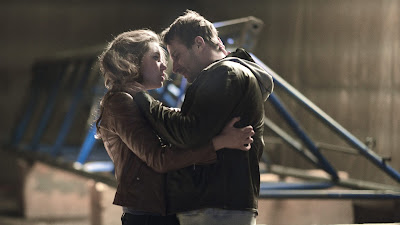 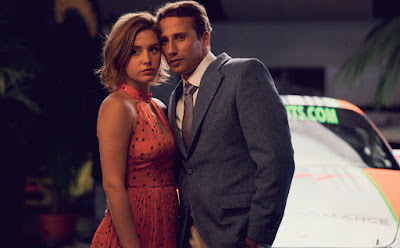 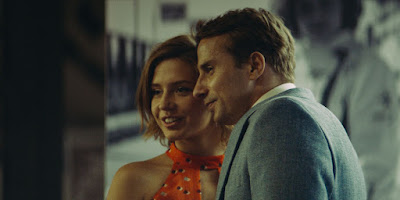 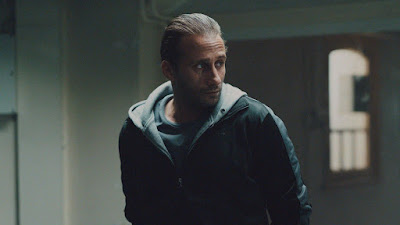 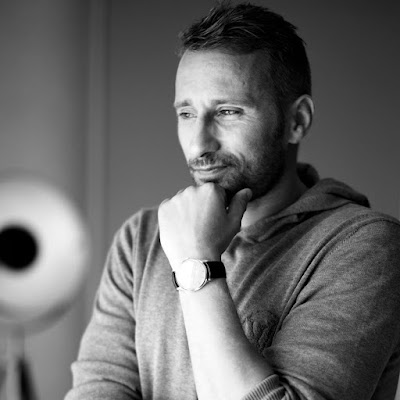 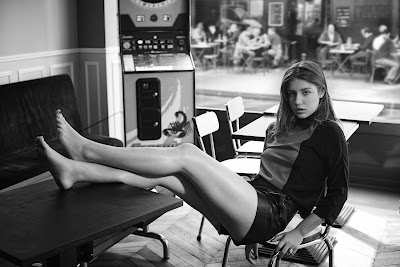 From the maker of 2012 Top Ten Films of the Year: #6 Bullhead (Rundskop) and The Drop (2014), both of which succeeded with riveting direction and terrific casting, this one maintains its hard edge, again prominently featuring Matthias Schoenaerts in a sexy thriller that revolves around fast cars, romance, a high stakes heist, and a double cross, perhaps the kind of film that used to feature the cool demeanor of actor Steve McQueen, but this time the film suffers in the casting of Adèle Exarchopoulos, who is beautiful to be sure, but in over her head when it comes to serious acting, as she’s never proven she can deliver a powerful performance onscreen, providing sexual allure, but no drama.  Seen earlier in relatively insipid performances in Nolwenn Lemesle’s Pieces of Me (Des morceaux de moi) (2012) and Pierre Godeau’s horrid prison drama Down By Love (Éperdument) (2016), along with her highly acclaimed but overrated performance in Abdellatif Kechiche’s Blue Is the Warmest Color (La Vie d'Adèle, Chapitres 1 et 2) (2013), the first gay/lesbian themed film to win the Palme d’Or at Cannes, though the sex scenes are exploitive and gratuitous, becoming the raison d’être of the film, where the real deficiency is surprisingly weak character development.  And therein lies the problem in this film, as the scenes where she appears simply underwhelm, sapping the high-voltage energy out of the film, as otherwise the sleek direction and powerful performances prevail in this consistently dark and stylish film that seems to feed on fatalism and a brooding code of silence among thieves.  At the center is this fascination with beautiful people, like the people who thrive in the elegance and luxury of places like Monaco, where Bibi, short for Bénédicte (Exarchopoulos), a rich girl hyped on speed and adrenaline, loves to race for her father’s race car team.  While she catches the eye, like a poster girl or magazine cover, the underlying story lies elsewhere, in the turbulent life of Gino, otherwise known as Gigi, a bank robber from a broken background, where he grew up in a life of crime with a tight-knit gang that has been his adopted family, developing an unbreakable bond, showing a rare allegiance to one another.  But when Gino sees Bibi the first time, removing her helmet and race uniform, revealing a svelte feminine physique underneath, his life suddenly jumps on a different track, where they instantly become the beautiful couple.

The theme of their first date is “No flowers,” as she’s not the sentimental type, while Gigi is not a man to mince words, both falling head over heels for each other, meeting at a seaside pier in a downpour overlooking a drearily overcast city of Brussels, forcing them indoors to have passionate sex, with him proclaiming to be in the car import/export business, a cover that allows him to move around a lot, making frequent trips to Paris with his gang of indispensable friends, where she’s none the wiser, blind to his real profession, though early on he acknowledges he’s secretly a gangster that robs banks, but she thinks he’s kidding, showing an underlying macho-side of himself that she likes.  As intense as ever, Schoenaerts is one of the best tough guys in the business, not only raw and imposing, but willing to mix it up with the best of them, where there’s always something dangerous and threatening about him, though here he puts on an air of sophistication that perfectly conceals his real identity.  After a while, however, she senses an unusual sense of privacy, spending a lot of time with his gang, urging him to come clean.  Gigi suggests his attraction to dangerous jobs is much like the adrenaline rush Bibi gets when she’s racing, suggesting a revealing portrait of two daredevils.  When the film cuts away to his day job, viewers will not be disappointed, as Roskam executes one of the most spectacularly staged heist sequences, where robbers swoop in like a SWAT team, all dressed in masks and camouflage, carrying automatic weapons, executing a perfectly timed robbery, where the planning and meticulous attention to detail is brilliant, but that’s nothing compared to the exit sequence, dropping a shipping container onto the highway, completely blocking their flight to freedom.  Masterfully shot by Roskam’s longtime Belgian cinematographer Nicolas Karakatsanis, who is also a professional photographer with works in art galleries, who perhaps uniquely specializes in shooting in darkness, where shadows prominently come into play, bringing what amounts to an avant garde aesthetic to the screen.  This perfectly matches the cocky swagger of Schoenaerts, who moves around undetected in the dark, an anonymous figure that could be anybody.

What’s perhaps surprising is the staying power of the romantic relationship, as there are plenty of opportunities to jump ship, not the least of which is her father’s warning that “Real men don’t lie,” suggesting that if he’s lived in the shadows until now, surrounded by nefarious figures, he’ll have to come clean if he wants to marry his daughter.  This powerful message haunts the rest of the film, as Gigi has made a living up until now by completely concealing who he is, living a duplicitous life, so in the end it comes down to what it always comes down to in the movies, making one last score.  This adds not only emphasis but suspense to the next job, with powerful implications.  Accordingly, this final job is wracked with innuendos and last minute complications, where the police are tipped off, adding a fatalistic gloom when Gigi winds up in prison.  Focusing almost entirely on his fall from grace, especially considering the opening highs, the tone becomes much more subdued, yet Bibi has her own strange subplot behind the scenes, veering into a melodrama of personal anguish and sorrow, which includes, incredibly, the involvement of Albanian gangsters to break him out of prison.  Adding whirlwind twists and turns, that at the very least are as perplexing as they are surprising, clouds the film in supreme mystery, as both lovers are operating on totally different psychological wavelengths, almost as if what’s happening comes from two different films.  In a film that’s already jam-packed with plenty of activity, it’s surprising to see all these late plot twists, but if anything, they add a darker picture of underlying grief and despair in a film that grows mercilessly bleak by the end.  Suffice it to say, the Albanians are good on their word, sneaking the man out of prison, but they’re hardly a trustworthy bunch, with even more complications arising upon his release, yet despite all this extraneous detail, Roskam and Schoenaerts are brilliant together, where the scenes devoted to his singular character are as bracing as anything he’s ever done, where the finale is a thing of beauty.  Borrowing heavily from Claude Lelouch’s masterful eight-minute short C’ÉTAIT UN RENDEZ-VOUS (1976), C'était un rendez vous - Claude Lelouch (HD) 8'24'' - YouTube (8:24), of a Ferrari, with a camera fastened to the front, racing unannounced through the streets of Paris one morning, reaching speeds of 140 mph, a transfixing piece of guerilla footage that was done without permits or police blocking off the streets (Lelouch was arrested once it was posted online), taking place live on the streets as you see it, with cars and pedestrians in play as they go flying through dozens of red lights, Roskam pulls off a similar stunt with Schoenaerts in the driver’s seat, a pulsating, stream-of-conscious, adrenal rush that puts an exclamation point on the end of this film.
Posted by Robert Kennedy at 12:00 AM