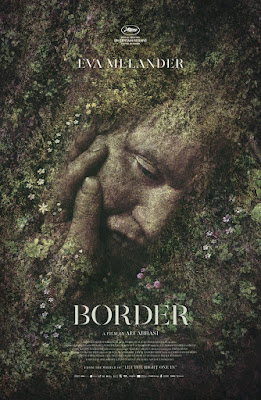 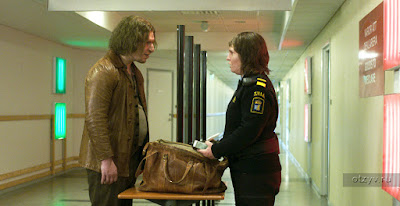 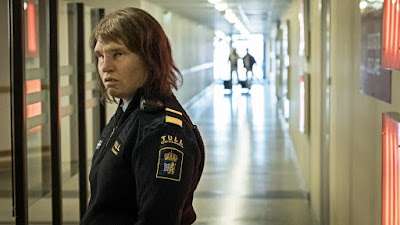 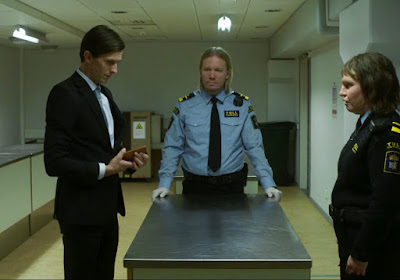 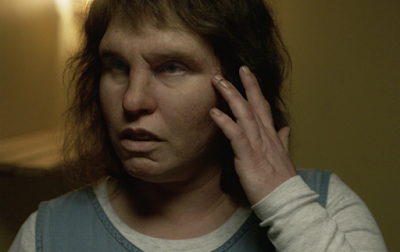 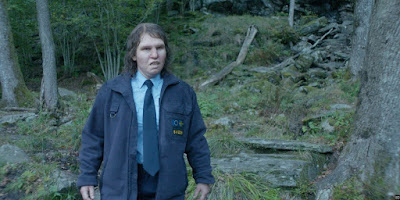 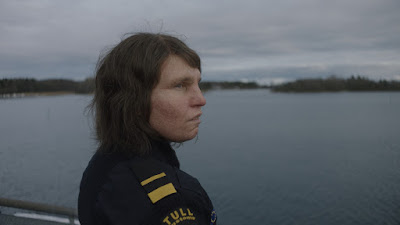 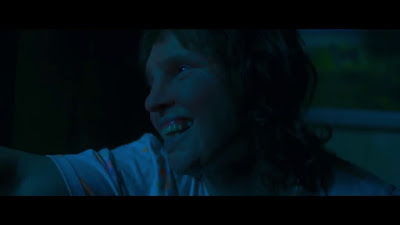 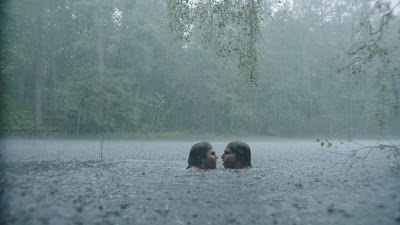 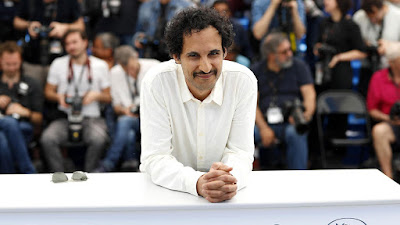 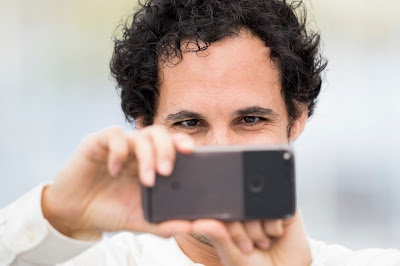 Born in Iran but now working in Sweden, this is Abbasi’s follow-up to his gothic horror thriller SHELLEY (2016), creating a bizarre mix of Nordic mythological folklore and supernatural fantasy that was the surprise winner of the Un Certain Regard section at Cannes.  Abassi started his career as a writer, intrigued by the magical realism of South American writers like Gabriel García Márquez or Carlos Fuentes, especially how they combined fantasy and realism to create a more intense story, where dreams and hallucinations become part of everyday life.  Adapted from the opening story of John Ajvide Lindqvist’s 2005 short story collection Let the Old Dreams Die, the same writer of Tomas Alfredson’s vampire film LET THE RIGHT ONE IN (2008), the film is a striking balance between the supernatural and the mundane, with much of it taking place in the minds of the characters, much like Joachim Trier’s 2017 Top Ten List #4 Thelma, which is more of a character study, while this might be considered a darkly romantic horror story.  Among the better directed films seen this year, but that doesn’t necessarily translate into one of the better films.  Abbasi is brilliant in establishing atmosphere and mood, with an incredible electronic music score from Christoffer Berg and Martin Dirkov, while the lush cinematography is provided by Nadim Carlsen, immediately luring the audience into an alternate world, featuring Swedish actress Eva Melander as Tina, completely unrecognizable under a silicone mask that took 4 to 5 hours to apply each day, working at a ferry terminal customs check point, where she can sense the mood of the person, whether they may be guilty or filled with shame, and then sniffs out the illegal contraband.  Her unique talent is accepted by her fellow inspectors, viewed as exceptional in her duties, as she’s so accurate.  But she has a monstrous look about her, perhaps the result of a physical deformity, yet she acts normal in her position, always discreetly polite to the passengers, yet the way she sniffs out what she senses is so bizarre that it’s always good for a laugh, as it seems so animalistic, like a hound dog on the trail.  Because of the precise detail of her work, however, the audience accepts her extrasensory gift without question, realizing she’s extraordinarily effective at what she does.  If truth be told, however, this sniffing method has been seen before in Bruno Dumont’s L’HUMANITÉ (1999), which also features a police inspector who may or may not be human, who intensely sniffs his suspects, yet the weirdness of his mannerisms was peculiarly off-putting throughout, but it didn’t prevent David Cronenberg’s jury from awarding nonprofessional actor Emmanuel Schotté the Best Actor award at Cannes.

Things begin to change when Tina encounters her mirror image in Vore, Finnish actor Eero Milonoff, so good as the overdriven manager in The Happiest Day in the Life of Olli Mäki (Hymyilevä mies) (2016), also unrecognizable in a similar silicone mask, where he seems happy to have his bag inspected, curious what her response will be, as he collects worms and insects, placing them inside a canister that resembles a bomb.  After a brief look she allows him to pass, more intrigued personally than professionally, especially when the two sniff each other, which the audience will get a kick out of, as it’s too comically absurd to ignore.  In another film they’d be an alien species, perhaps defined by their differences, but in this film they co-exist with the rest of the human race, deformed creatures following the same rules and guidelines, where they’ve become part of the world we live in.  It’s an oddly compelling premise, but the John Carpenter-style soundtrack adds depth and space, elevating their interior world, becoming something wondrous to behold.  In no time Tina is called into the office of a police investigator, asking how she was able to detect an incriminating device of stored child pornographic material placed in someone’s cellphone, explaining she can just sense these things.  “Is it really possible to smell what people are feeling?”  Viewers already know the answer.  The inspector asks for help in identifying a specific location where these crimes are occurring, having narrowed it down to a general region.  Curiously, this subplot about a pedophile ring was not in the original Lindqvist story, but may be paying homage to his earlier novel Let the Right One In, where the pedophile subplot was omitted from the film.  What’s surprising is just how completely accepted Tina is in the police investigative business, treated as an invaluable resource, as she unearths evidence no human could find.  Tina has a home next to a forest, where she’s able to commune with animals, also visit a pristinely beautiful lake that looks unspoiled and unchanged since the world began.  She has an odd roommate that she describes as her boyfriend, Roland (Jörgen Thorsson), but their relationship is sexless, as he’s void of ambition or love, spending his time drinking and tending to his prized Dobermans.  It’s when Vore visits again that things get interesting, as he undergoes a personal search where her partner discovers he is a she, as he has female sex organs.  Curiously, he also has similar scars and markings on his body, where she had always been told about chromosomal abnormalities to explain her deformities.  Interestingly, Tina also visits her elderly father in a senior center, Sten Ljunggren from Lukas Moodysson’s Together (Tillsammans) (2000), where he clearly has deteriorating memory issues.  But when she asks about the scars, he offers a simple explanation that sounds reasonable, but could hardly explain the exact same marking on two different people.

Accepting all her deformities, Tina is at peace with the surrounding natural world, and can even sense when animals are about to cross the road, waiting patiently in her car for them to magically appear, while resigning herself to living as an outsider on the margins of society.  But meeting Vore alters that perception, as he accepts her the way she is, wanting nothing changed.  He has a bit of an attitude himself, proudly displaying his differences, which is something he’s not ashamed of, feasting on the bugs and insects he collects, finding them incredibly tasty, offering some to Tina, which she also devours.  When Tina invites Vore to move into her guest cabin, things heat up, as the two of them find an irresistible animal attraction between them, though not at first, where Roland appears to be the outsider, the odd man out.  When he takes his dogs to a dog show, though, the two are left alone on the premises, allowing their true nature to reveal itself.  What happens next is better experienced than described, curiously unworldly, though their foreplay resembles Klingon love from Star Trek, yet it’s mostly a shock to the system, and a revelation for Tina, who no longer has to hide, but is actually appreciated, finding it a completely liberating experience.  It’s an interesting metaphor for minorities and people who are different, so easily ostracized from communities, yet have the same need for love and companionship as anyone else, human or otherwise.  Vore supplies many of the missing pieces about her childhood and their strange culture, suggesting there are others like them in hiding in Finland, yet he also has an aversion to humans, finding them weak and selfish, believing they are diabolically evil and should get what they deserve, offering weird implications about exacting revenge.  Tina, on the other hand, exhibits no sense of vengeance, thinking not all humans are evil, and she’d prefer no one gets hurt, wondering if that’s a human quality.  But it’s clear her father has been hiding secrets from her, much like the parents in 2017 Top Ten List #4 Thelma, who were afraid of their child’s supernatural power if unleashed onto the world.  Thelma also wanted to use her powers for good and actually despised the idea of pain and retribution.  Tina is an incredibly well thought out character and Melander does wonders in the role, but some might find it too weird and grotesque to experience a significant emotional impact, valuing mood and special effects over any human drama, despite the exquisite direction that keeps viewers engaged throughout.  But good and evil are universal considerations, where this film takes us to both extremes, examining what it is to be human and non-human, while also questioning the moral values of living in both worlds.  One is not inherently more evil, but may act that way sometimes as a means to protect themselves from the fire and brimstone hurled in their direction.  There’s plenty of Nordic mythology depicted in this film, including a species “chased by lightning,” perhaps penance for their wrongdoing from mythical times, but what’s clear is audiences haven’t seen a pair of lovers like this, deserving plenty of credit for originality.
Posted by Robert Kennedy at 12:00 AM