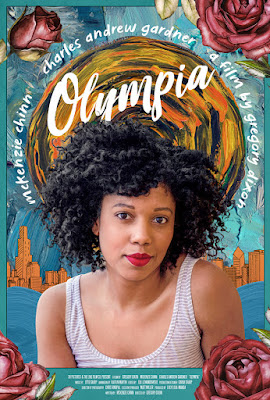 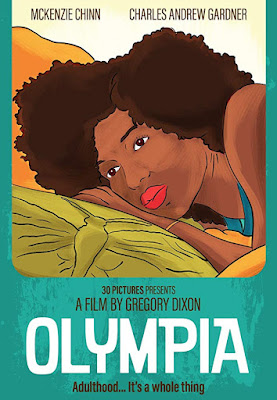 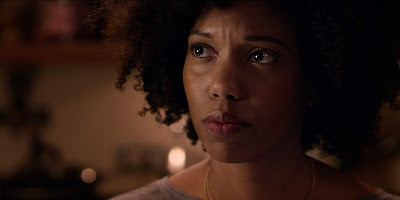 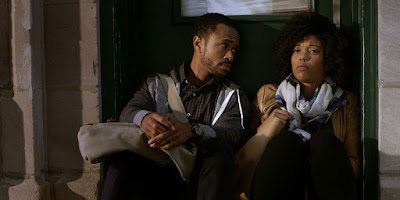 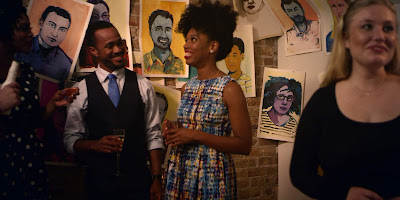 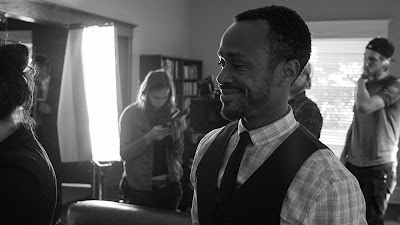 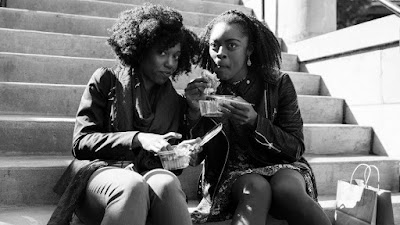 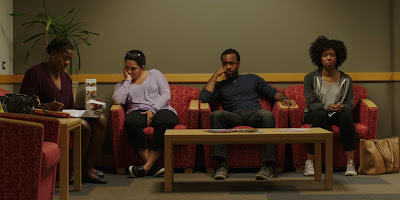 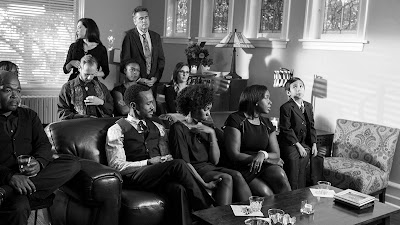 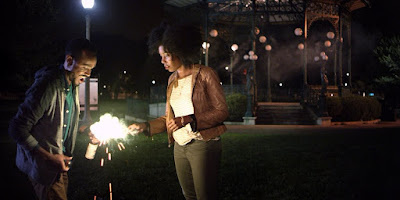 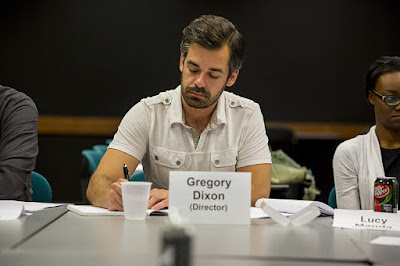 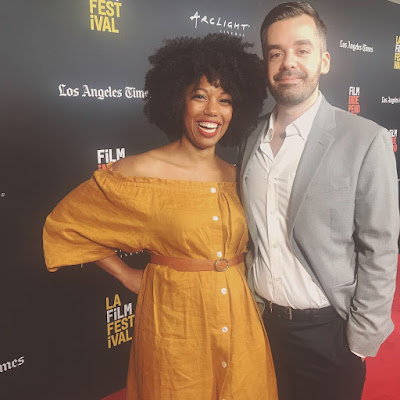 Writer/actress McKenzie Chinn with the director 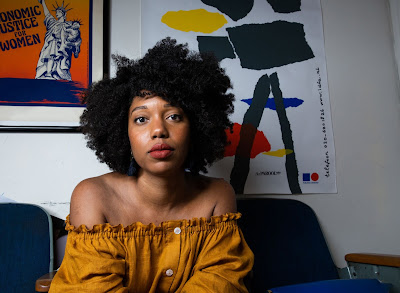 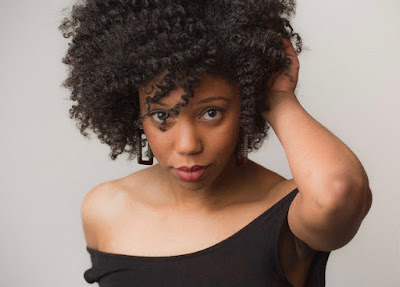 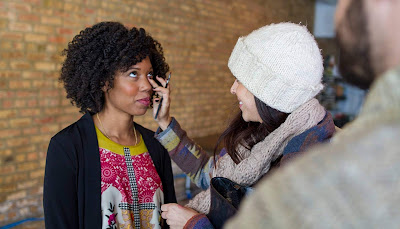 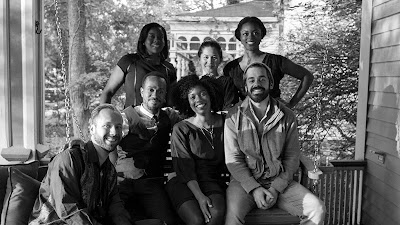 
The longtime personal project of Chicago writer/actress McKenzie Chinn, who developed the storyline as a grad student at the Theatre School at DePaul University, where she met fellow student and budding director Gregory Dixon in the film school.  Both are recipients of awards and grants, with Chinn the recipient of a Leonore Annenberg Fellowship, which authorized $50,000 to get this project started, while the film is Dixon’s Master’s Thesis film, distributed by a company largely staffed by DePaul alumni.  Both are also producers on the film.  Starting with an early working title, Olympia ― An Instruction Manual For How Things Work, the indie film (complete with a folk track) is about two struggling black artists trying to make it in Chicago, Olympia (Chinn) and her boyfriend Felix (Charles Andrew Gardner), both approaching thirty, believing your 20’s is an age when you’re still trying to figure things out, but by thirty a career path should be evolving.  A little unsure about why that’s not happening, Olympia has a dead-end job as a receptionist in a downtown office building that’s going nowhere, as there’s hardly any visitors, but this allows her plenty of free time to draw, as she’s a budding sketch artist and illustrator, while Felix is a failed musician now working on a start-up app supposedly on the verge of being successful.  What’s immediately unique about the film’s approach are the animated hand-drawings sketched onto the film, allowing viewers to gain some insight into Olympia’s state of mind, something we’ve seen before in films like Marc Webb’s (500) Days of Summer (2009) or Marielle Heller’s Diary of a Teenage Girl (2015), though the beginning is easily the weakest part of the film, as there’s little about it that distinguishes it from watching any television show, feeling like pretty standard fare, where the skyline of Chicago and the downtown area River Walk are used to good effect.  But thankfully things only get better as we grow more familiar with the characters.  Easily one of the best experiences in the film is Olympia’s best friend and roommate Jemma (Ericka Ratcliff), who she’s known since childhood, who adds a spark of energy and sardonic wit (and says everything with those fierce looking eyes), a budding writer who gets a job in New York where she’s actually paid to write, like her dream job, but it requires her to relocate.  At the same time, Felix’s company is relocating to California, where he needs to go with the flow if he wants to stay onboard, something he realizes he has to do, but all their friends and family connections are in Chicago, including, as we soon realize, Olympia’s mother (Penelope Walker) who’s gravely ill in the hospital with cancer.


While there is a 30th birthday celebration surrounded by a diverse group of family and friends, Olympia gets some not-so-needed advice from an aunt or big sister Grace (LaNisa Renee Frederick), who urges her to get real and move on with her life, having little good to say about Felix, who she finds too weak and insecure, never really sure about what he wanted to do, who may fall flat on his face with this new job, and then where does that leave her.  This is followed, of course, by a heartfelt singing tribute from Felix to Olympia, which includes flashbacks to their first date, where she sees him perform, but plays hard to get when he expresses an interest in her.  In fact, the relationship trajectory is quite different here, as Felix is always waiting patiently as the nice guy while she puts him off time and time again, where she makes him work to stay connected, but there’s a nice and easy low-key connection about them that’s also beautiful to watch, as both are generous and likeable, sympathetic towards others, and not just wrapped up with themselves.  But then, the moment you realize this, they both get overly wrapped up with themselves, which doesn’t “feel” right, as we were lead to believe they were both way cooler than that.  Felix asks Olympia to come with him to California, to build a life together, with marriage as the ultimate option, but only if she’s ready, yet she’s too absorbed with her own life to actually listen, preferring to separate from his reality, at least momentarily, as she’s not yet ready to give up on her own, which includes a gallery showing, where she awkwardly stands around her own work waiting for anyone to express a hint of interest, and when they do, she’s too nervous to inquire why.  There’s a cute little scene with an interested customer, Gabrielle (Charin Alvarez), a no-nonsense businesswoman who simply doesn’t waste time with chit chat, where Olympia’s simply too nervous to get the right words out, which is a wonderful example of first impressions going haywire, but at least she establishes a bona fide contact with a buyer/seller.  Meanwhile she has a little heart to heart with her mother who wonders why she’s spending evenings in the hospital with her instead of the young man in her life, who’s emotionally put himself out there with his offer that she’s resisting, reminding her daughter that everyone has regrets in their life, but isn’t it better to regret something you’ve done instead of something you never had the courage to try.

We learn Olympia is something of a diva, pretty high maintenance, thinking very highly of herself, especially the way she keeps putting Felix off, not even bothering to return calls or texts, but there’s a lot swirling around in her life and she’s stressed with so little time to process it all.  Jemma returns home, completely flummoxed by the extreme degree of pressure at work, suffocating the life right out of her, so she had to get away.  Olympia calmly reassures her that she’s the strongest person she knows, and that if anyone could handle it, she can.  It’s a tender moment that defines the smaller moments in our lives that seem to have the most meaning.  When her mother takes a turn for the worse, the family gathers at the hospital, spending nights at her bedside, including flashbacks of her earlier life, but she passes, leaving a huge emptiness in Olympia’s life.  Distraught and wanting to be alone, she receives a message from her distant father who she hasn’t seen since she was a little girl, having abandoned the family, but she has a photograph of her mother and father together.  Before she can even finish the message, she rips that photograph up in a fit of rage, angry at how anyone would leave without a word for decades.  However, in the next scene she’s taping that photograph back together again, pulling out her drawing pad and starts sketching them, working through the night, finally completing a project she’s been working on forever, the illustrated book of her life.  Setting up an appointment with Gabrielle, she’s eager and anxious to show it to her.  The epitome of cold reserve, Gabrielle waits to hear what she has to say while simultaneously answering several emails, not really certain why this young woman is taking her time.  But when she looks at the book, she’s really encouraging and hopeful, exactly what any budding young artist would like to hear, where it’s like an epiphany, or a divine revelation, where all of a sudden her life is restored and the world finally makes sense.  By the time she gets to Felix’s door, he’s busy packing, but he’s also pissed, as the train has left the station on their relationship, and he’s simply moved on without her.  But that’s not how this film ends, as it’s a sweet effort that suggests nothing comes easy in life, that you have to go through struggles that don’t necessarily make sense to finally stand on solid ground and discover the person you really are.  When you have a strong parent, always living under their wing, sometimes it takes a tragedy to discover your own inner strength.  What’s unique about this black experience is that it doesn’t fit the traditional stereotypes, but is revolutionary in its own simplicity, where expressing how human you are is always a big deal.
Posted by Robert Kennedy at 12:08 AM