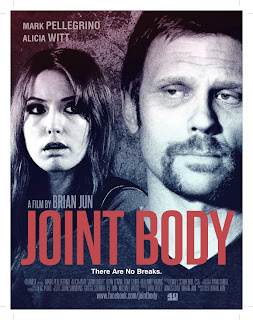 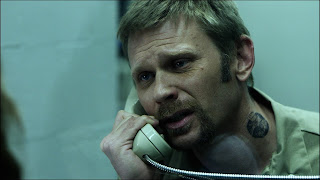 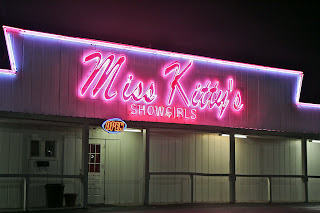 JOINT BODY             C
USA  (86 mi)  2011  ‘Scope  d:  Brian Jun                    Official Facebook
A film shot in the small towns of Southern Illinois, accentuated by bars, strip clubs, motel rooms, and local police departments, offering a decidedly different pace of life, like the kind of place where one could start a new life.  Nick Burke (Mark Pellegrino) is just such a man, recently released on parole in his mid forties, but a violent offender since age 15.  Looking a bit like Viggo Mortensen from Cronenberg’s A HISTORY OF VIOLENCE (2005), perhaps a similar ultra violent character who never got a fair shake out of life, this is a guy looking for a fresh start.  Divorced from his wife while incarcerated, a condition of parole is that he relinquish all custody rights of his daughter, someone he obviously obsesses about, still carrying her picture around with him at all times, now he’s a quiet loner not looking for any hassles.  Simultaneously, we see a story developing of Michelle (Alicia Witt), an independent minded exotic dancer also living on her own, where as luck would have it they live in the same motel.  Nick’s younger brother (Ryan O’Nan) shows up describing his life as a newlywed, also a police officer just out of the academy, where he’s optimistic, inexplicably supplying him with a gun for protection, which of course immediately comes into play.
Just as Nick gets the nerve to ask his attractive neighbor for coffee, where she agrees to meet in a few minutes, Michelle also has a visitor from her past, a deranged veteran that she barely knows who has obsessed about her for months overseas and violently confronts her, demanding a personal reward for his service to his country, sticking a gun in her face as he brutally rapes her in her own room, making so much commotion Nick overhears and comes to intervene, leaving both men shot and lying on the ground while Michelle limps out of the room.  Society judges harshly with violent offenders, offering no leeway when it comes to the use of guns, so Nick is screwed, having violated parole, no matter what his intentions were in the matter.  Michelle, on the other hand, appreciates the effort and visits him in the hospital, helping him out with a few things, like a new pair of clothes and money from his brother that he kept hidden in the room. However she runs into a police detective who interrogates her, where the obvious slant is a career criminal has murdered a highly decorated war veteran, so what interest does she have with this loser?  It’s a good question, and one she apparently doesn’t ask herself, as even though the detective is a belligerent prick with her, what does she stand to gain by helping a wanted outlaw?  Nevertheless, the two are outlaws on the run soon afterwards, which you’d think might lead somewhere, but it doesn’t.  By the way, the title refers to the body language of convicts when they come out of prison (the joint), easy to detect, supposedly, by those in the know.
While Pellegrino and Witt are both excellent, especially as they examine each other's haunted pasts, but the director’s own script is abysmally weak, as rather than getting the hell out of town and starting a new life far away with a couple thousand dollars in their pockets, they never leave the vicinity and continue to show up in very public places like restaurants and bars, as if they’re just waiting to get caught.  The narrative couldn’t be more hackneyed and stereotypical, where there’s no investment whatsoever in a unique idea or vision, where the audience is rather appalled at the choices the characters make, as they appear to be smarter than that.  It’s a waste of good performances, including Nick’s brother and his wife (Daesha Lynn) after a fairly decent set up, where the director allows a slow introductory development of the characters within an observant view of the neighboring community, only to have the story itself betray the audience’s piqued interest.  Not sure why the director couldn’t see the contrivances in this kind of finale, which would be dull even by Movie of the Week television standards, but after listening to him address the audience afterwards, he’s apparently still living on the laurels of his first film STEEL CITY, which won the Grand Jury prize at Sundance in 2006.
Posted by Robert Kennedy at 10:52 PM