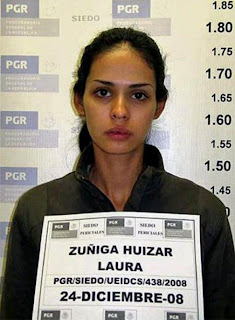 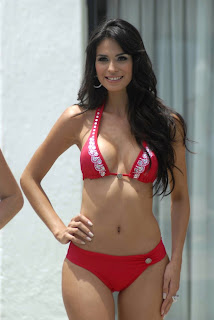 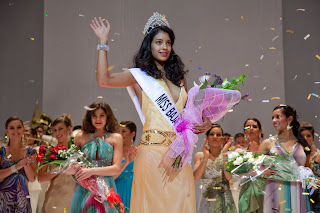 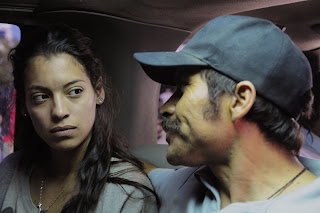 MISS BALA                            A-
Mexico  (113 mi)  2011  ‘Scope  d:  Gerardo Naranjo
While this is a case of the truth is stranger than fiction, the director along with fellow writer Mauricio Katz have fashioned a fictionalized account of real events that leap out of the headlines, Miss Sinaloa and the Seven Narcos, ran the headline in The Mexican-Daily El Universal, where beauty queen Laura Zuñiga, Miss Sinaloa 2008, was arrested along with seven suspected narco drug traffickers in a truck filled with guns and ammunition, including $53,000 in cash, two AR-15 rifles, three handguns, 633 cartridges of different calibers, and 16 cellphones, on December 23, 2008 in Zapopan, Mexico.  According to the film, 50,000 people have lost their lives in the Mexican Drug Wars just in the last 6 years where the profiteers are protecting a $30 billion dollar industry within Mexico alone, which of course, also exports to the consumer hungry United States.  What makes this even more interesting is the connection to American (DEA) Drug Enforcement Agents, where recently the U.S. Attorney General has come under fire for his lack of knowledge about guns from the DEA gone missing in Mexico in an operation gone bad, where it turns out the U.S. is basically arming the narco traffickers.  But this film foregoes the politics and turns this into an atmospheric mood piece on abject fear and hopelessness, creating a harrowing and visceral experience, a seat-of-your-pants thriller reminiscent of the opening episode from AMORES PERROS (2000), easily the best thing Mexican director Alejandro González Iñárritu has ever done, with both uniquely expressing a raw, in-your-face, hyperkinetic energy that literally jumps off the screen.  This film creates a similar pulse rate, but only in certain stages, as otherwise the gangsters lay low for awhile and rest easy for a little R & R with the co-opted beauty queen until they decide to move again.  Much of this has the feel of a para-military operation, complete with reconnaissance teams that always report the whereabouts of the cops, information from men who have infiltrated inside the records of the army and police, using one-time only cell phones to communicate orders to the commanders in the field, which are then cleaned to prevent tracing, while armies of trucks and black SUV’s with tinted windows swerve in and out of traffic in precise increments based on their knowledge of the various positions of the police.  Make no mistake, these are military maneuvers.
While this may sound surprising to most Americans who still haven’t a clue what’s happening in the gang wars taking place in ghettos across America, this activity in Mexico is not confined to specific neighborhoods, but can play out on the city streets anywhere, where the presence of these gigantic SUV’s is an everyday reality for most citizens, where all they can hope is that they’re not targeting civilians.  Like any other war, this one goes after the Who’s Who in both the police and drug trafficker operations, each searching for the other, and when they meet a fierce firefight develops instantaneously, where chaos reigns and bullets fly in all directions.  The collateral damage extends to innocent civilians who happen to be in the wrong place at the wrong time.  This film doesn’t suppose what happens when the innocent civilian is a Mexican beauty queen, but uses her actual experience of what really happened when she got sucked into narco operations purely by chance, where she proved useful to them as she was scared shitless, afraid for the lives of her family, so would do as instructed over a brief period of time which included several operations.  In real life, she was released following her arrest after the subsequent investigation proved she had no involvement with the narco drug industry, but was only a pawn in their game, suggesting it could just as easily be anybody, and often is.  This one just happened to be especially pretty, Stephanie Sigman as Laura Guerrero, a beauty queen contestant that attracted the eye of the drug kingpin, Lino (Noe Hernandez), a shadowy head of the Estrella drug cartel who sees her huddling in the corner during the middle of a raid on a nightclub targeting DEA agents, allowing her to live in order to make use of her in the future.  The film wastes no time getting right into the thick of the action.


This plays out like a Mexican version of a Michael Mann action thriller, shot in ‘Scope using long takes from the constantly probing camera by Hungarian cinematographer Mátyás Erdély, often altering the focus in the same shot, making excellent use of locations and off-screen sound, featuring riveting performances from characters forced to act on impulse when events continually spiral out of control, where the gangsters thrive on this kind of heart racing action, driving trophy Porsches through the streets of Tijuana, but not a teenage girl who is being used for target practice for the first time in her life, where she spends most of the movie close to peeing in her pants from the intense fear, where Lino is continually toying with her, always getting what he wants and then throwing her away until she’s summoned again from out of the blue, a repeating cycle that seemingly can’t be broken.  The overriding theme here is fear and how it plays havoc with ordinary people who are caught up in this phenomenon of gunfights taking place on the city streets in broad daylight, where one of the best edited transitions seen all year finds Laura pinned down in one of the fiercest gunfights you could imagine, using a slow tracking shot where bodies are dropping and bullets are flying, where the sound is deafening, like what it must have been for the Marines trapped in Mogadishu, where she is then whisked away from that reality into a continuing pan through the back wings of a beauty pageant where she is quickly dressed for a runway appearance, and with tears streaming down her face she’s continually reminded to smile.  This kind of mood shift is insane, as you have no time to process the fear, as her life has turned into a human pin cushion of getting stuck repeatedly with having to perform some of the most dangerous drug operations, where she is the center of the storm not knowing which way to turn for safety, as the bullets are flying from every direction, where Laura has to rely on the whims of a cold blooded killer for protection.  While the film is seen exclusively through the terrified eyes of one woman, the larger issues of Mexico’s inability to protect ordinary citizens from being caught in the crossfire of the Drug Wars remain.
Posted by Robert Kennedy at 1:58 AM